In 1955, Tove Jansson asked Tuulikki Pietilä to dance. They had sat all night around the gramophone together, guarding it whilst they played their records so that nobody could change the music. But Pietilä said no: same-sex relationships were still illegal in Finland — and would be until 1971 — and – the threat of judgement from peers and colleagues was intense. Queer people know well the hollow of panic, deep in the gut, when you think that your disguises may have failed. It is why, historically, we have avoided large displays of affection; why our histories take the form of private letters, fragments hidden inside books and diaries. The story of Tove and Tuulikki is no different; soon after she refused to dance, Tuulikki sent Tove a card with a cat, fat and striped, hand-drawn on the front. A code that meant: I am thinking of you. After telephone calls over the holidays, Tove finally set off to Tuulikki’s studio. It was March, and snowing, when she walked over; the streets were dark and the fat flakes fell in drifts that made the roads shine. When she got there, the studio warm and light like a ship’s cabin at sea, they drank wine and played French records.

Jansson’s queerness is often left out in stories of her life. Puffin editions of Moomin books talked about how she lived alone on her Finnish island; documentaries still talk of Pietilä as a lifelong friend. Jansson is no  misnomer, rather, she fits in neatly with the trend of avoiding the personal lives of gay people  – particularly lesbians – that exists to this day. Society dissolves queer realities: erases the two bodies sharing a bed, wrapped around each other, the two bodies fucking, the moments and hours and days, the holding hands and arguing and kissing and small talk. As seen throughout history, gayness is coded as dangerous for children. It is portrayed something purely sexual or purely chaste, rarely afforded the complexity and nuance afforded to heterosexual relationships. For Jansson to be a successful children’s writer she was portrayed as sexless, loveless. It’s particularly egregious when queerness informs the work of a writer to that extent that it did for Jansson. Not only do the themes of loneliness, family and love shape her work for adults and children, but she included characters based on her female lovers in many of her works. 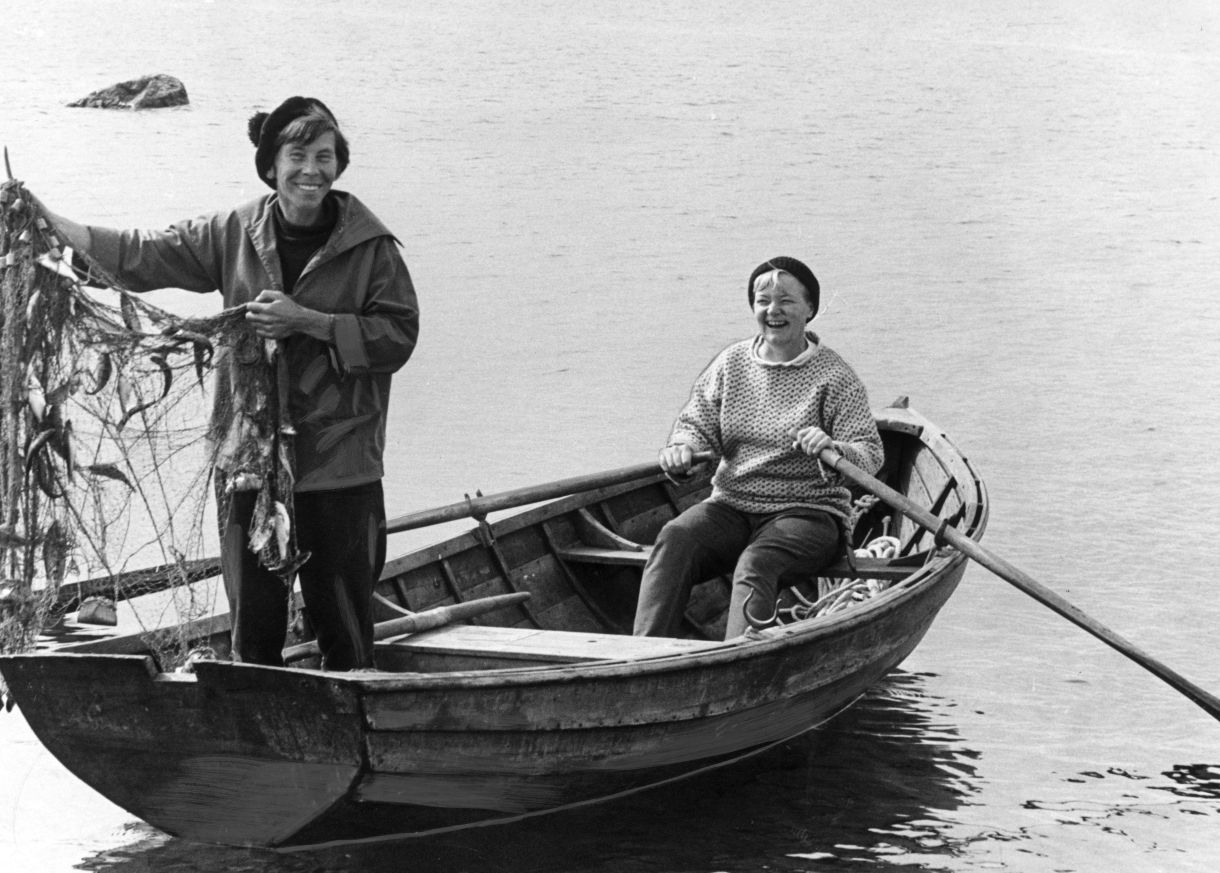 Before meeting Pietilä, Jansson had been in a creative crisis. She knew the demand was high for another Moomin book, but dreaded the thought of repeating herself – she longed for new ground to tread, for the freedom of inspiration. As her fame had increased, so had her awareness that the Moomins were no longer hers alone; they now appeared on waste paper baskets and brooches and wrapping paper, and the public always wanted more. In 1955 she wrote of her conflicting feelings, saying, “I can’t recall exactly when I became hostile to my work, or how it happened and what I should do to recapture my natural pleasure in it.” The knowledge that she had to write another Moomin book loomed large in her mind. It was precisely Pietilä’s influence that helped overcome her writer’s block: “That I was able to write Moominland Midwinter was entirely due to Tooti,” Jansson stated to biographer Boel Westin in Tove Jansson: Life, Art Words. Out of their love letters the character of Too-tikky had been formed, first as an inky doodle of her lover’s likeness (‘My Tootikki!’, she nicknamed Pietilä), and then slowly as a fleshed-out form.

Moominland Midwinter was a radical departure from the sun-drenched summers of the Moomin valley that readers had seen before — sailing boats framed by orange-slice suns, picnics on the terrace, dances in the woods. Instead, Moomin wakes up from hibernation in the cold dark of a Finnish winter, pine trees blanketed with snow. He is disoriented and scared, eager to wake up his mother for comfort. However, when she turns away from him in her sleep he realises he must deal with this new world — and his yearning for spring — on his own. There to help him is Too-tikky, as no-nonsense as her flesh and blood counterpart, who describes to him the dancing colours of the Northern Lights, states “One has to discover everything for oneself.” Moomin realises that the winter is needed, for after it follows the spring, lush and bright and alive. It’s hard not to read this as a mirror of Jansson and Pietilä’s relationship, blooming out of the snow and cold — in Moominland Midwinter, our narrator states “There are such a lot of things that have no place in summer and autumn and spring. Everything that’s a little shy and a little rum. Some kinds of night animals and people that don’t fit in with others and that nobody really believes in.” The winter gives us as queer people the chance to show ourselves, to claim the world as ours.

This wasn’t the first lover she had included in her stories: Vivica Bandler, the married theatre director with whom Jansson had an affair in 1946, became the character of Bob. Bob’s counterpart, Thingumy, was Tove, who wrote to Bandler, “No one understands their language, but that doesn’t matter so long as they themselves know what it’s all about… Do you love me? Of dourse you coo! Sanks and the thame to you!” This exchange ended up almost entirely complete in Jansson’s next Moomin book, Finn Family Moomintroll, where Thingumy and Bob are introduced as intertwined, inextricable creatures, their names better known in conjunction than when on their own. They even look the same, only differentiated by the hat Bob wears. By placing them, idiosyncratic and unmissable, at the centre of the story, Jansson was able to make a public declaration of love in a private manner. Her passion – her willingness to depict their relationship for anybody who could decipher the code – led Bandler to warn her to be secretive. Not only was their love illegal, but it was classed as a psychiatric condition, and its reveal would have cost both women their livelihoods and families. 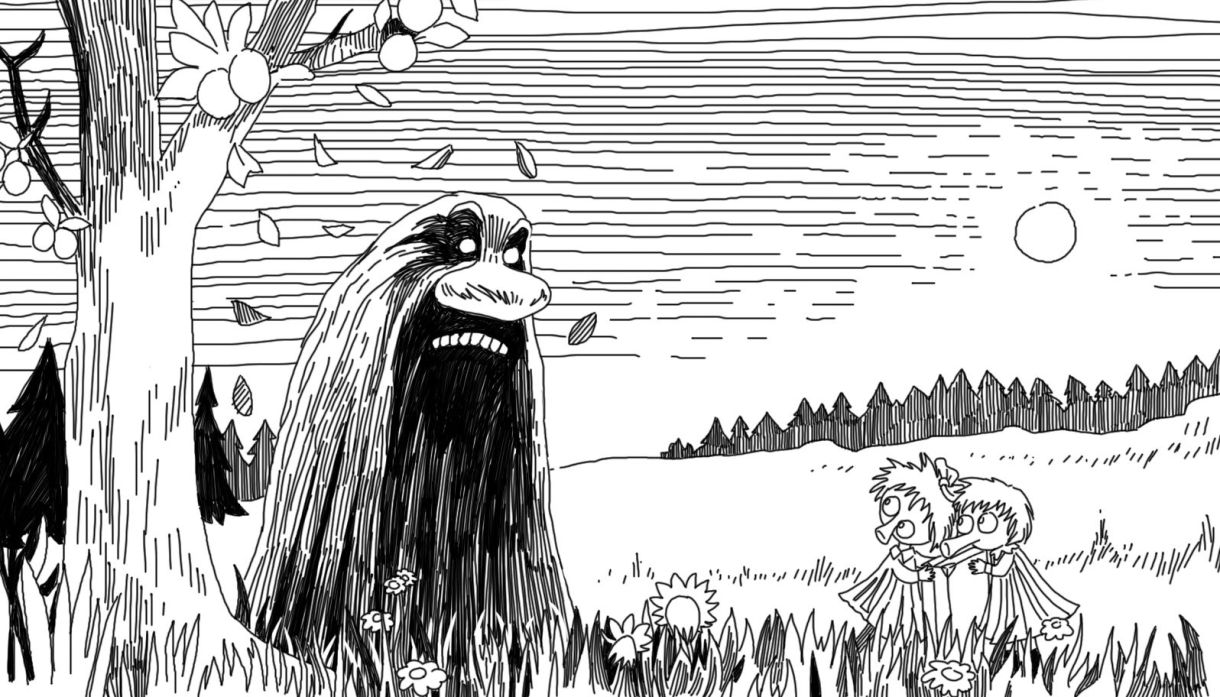 Thingumy and Bob with the Groke

Queerness is Jansson’s works is never as simplistic as direct representation of lovers. It’s something that seeped into the pages, flowing along the lines in the illustrations. In a letter to Bandler, Jansson talks of how “everything has changed since I met you! Every tone is more vivid, every colour cleaner, all my perceptions are sharper.” Already so occupied with “pure, fresh colours” – fleshy greens and cornflower blues and sherbet yellows – Jansson’s passion for Bandler allowed her to utilise them further in her work, encouraging her to use them with a giddy joy on the front cover of Finn Family Moomintroll. Her renewed passion for colour around this time is also prominent in the murals she painted in Helsinki Town Hall, into which she painted Bandler, a tiny Moomintroll and herself; fan in one hand, cigarette in the other, turning her blue eyes away from the viewer’s gaze.

Throughout Finn Family Moomintroll there is a presence, cold and dark and flat, sucking the light from the sun, wilting the flowers. The Groke is the closest the Moomin books get to an antagonist, although even she is treated with sympathy. She is grey as a storm cloud, and wherever she goes the plants and creatures die. She is the antithesis of Thingumy and Bob’s happiness, the embodiment of loneliness to their companionship. It is they who get to keep suitcase of rubies in the end of the story, a treasure many long for but one whose dazzling contents are only available to those who have ‘the right’ to own it — their love makes them the only ones suitable for the honour. It’s tempting to read the Groke as an allegory for the bigotry of a society that seeks to separate lovers, and for the misery that follows. In typical Tove fashion, however, the Groke is not a figure of hatred or derision, but one of pity.

It is Too-Ticky who, in Moominland Midwinter, encourages us to empathise with the Groke — to consider how desperately lonely a life untouched by love must be. This is not to say that Jansson did not face the isolation that is inherent in the lives of most queer people — although she remained with Pietilä for the rest of her life, and although they shared connected apartments and their island cottage, she could never discuss her love with her family. Jansson was open with her friends, telling them that she the “happiest and most genuine solution for me will be to go over to the spook side;” a wonderfully matter-of-fact way of resolving her own conflicts over her sexuality. But both her father and her mother were unable to discuss it with her — Jansson describes how her father tried to speak with her after he had heard gossip, but ultimately, he could not say the “difficult word homosexual.” Jansson suspected that her mother knew, but never raised the subject, writing “I can accept this […] But it feels lonely.”

Only after her parents had died did Jansson write Fair Play, a collection of short stories that fictionalised her relationship with Pietilä. The characters in the book, Jonna and Mari, live as Jansson and Pietilä do – in adjoining apartments with connecting studios. They are – respectively – an artist, and an illustrator and writer. The stories are quiet: Jonna and Mari watch westerns together, try to protect their fishing nets from a storm, bicker over the way paintings hang on the wall. They travel to America, as their real-life counterparts did, and sleep in a tent when a guest stays in their island cottage. But it’s everyday-ness is precisely what makes it so calmly radical. It is a portrait of a lifelong lesbian couple, allowing us to see into their daily lives, the minutiae of how they live, and on display at the centre of everything is their love for one another. In her introduction Ali Smith brilliantly summarises it as “affectionate discretion […] a good-working love, a homage to the kind of coupledom that rarely receives such homage.” No longer forced to be secretive, no longer codified or veiled, Fair Play remains a testament to the impact of Jansson and Pietilä’s love, an open celebration of everyday queerness.

Jansson’s legacy — as an author, as an artist, and as a lesbian icon – is continually being re-evaluated. But the public perception of her as a lonely figure bent over her Moomin drawings, isolated on her Finnish island, still lingers. Jansson’s private life is still hidden from view, glossed over in author biographies and critical examinations of her work. But to neglect to pay attention to this; to treat Jansson’s queerness as extraneous, is to fail to see how crucial her love for women is to her work. Whether in the pages of her Moomin books or on the walls of Helsinki, it’s on display to all those who care to look.

Hannah is a freelance writer and editor based in south-east London. She is one-half of Offord Road Books, and enjoys herbal-flavoured alcohol and the Kenwood Ladies Pond. Follow her on Twitter @hkatewilliams