Welcome to the thirteenth episode of the second season of The Fosters, the ABC Family drama that asks the question, “What if Glee didn’t suck? WHAT THEN?” (What then is it still wouldn’t land its heart punches and soul hugs as good as The Fosters, but sweet heavenly mercies, if Glee used The Fosters as a model, I’d have a lot fewer holes in my wall from where I keep smashing my entire head into it.) 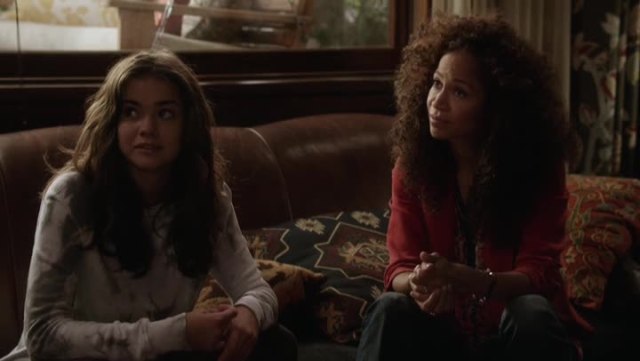 Unless you’re finally coming out, Mariana, this will have to wait.

Surprise! Callie’s life is still a shitshow hellscape! In addition to the fact that her biological dad will not re-sign the adoption papers Stef and Lena need to provideCallie with the first stable home of her whole life, it turns out her schools have lost her transcripts. You’d think those files would be digital, right? Or at least that there’d be more than one paper copy of them? Or that you could recreate transcripts with like report cards or information from previous teachers? I know for a fact if you submit a supplemental essay with your college application that you can have that essay printed out on a receipt machine at your nearest coffee shop. I have seen that happen. I’ve seen it right on this very network. Sadly, Callie is not lucky enough to live in a world where she is endlessly stalked and murdered by a cyberterrorist ghost.

She yells as Stef and Lena a little bit, which is completely understandable because it just never ends for this kid. She reminds them that she got taken from them once because they didn’t renew their foster parent license, but that’s really the only thing she can figure out to blame them for. The other times she got pulled out of their home were because she ran away and went to jail and also because the universe just hates her guts. 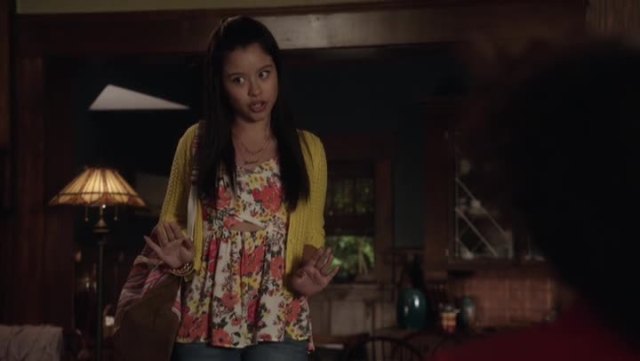 I don’t think it counts as being a lesbian when you’re only gay for one — maybe two? — girls.

Mariana floats in on a cloud of overachievement to announce that she has achieved an E in her Math O.W.L. and has therefore been invited to take N.E.W.T.-level classes next year. She’s only slightly offended when Stef and Lena don’t produce balloons and cake on the spot. Mariana is the best. I love her with a deep and enormous affection. She’s a teenager, but she’s also able to access that part of her brain that isn’t all impulses and hormones. She knows there’s something going on in this living room that’s more pressing than her invite to the STEM club, and also she knows that she’s going to be a Senator some day, so the party in her honor can wait for a minute.

When the girls go off to bed, Lena’s like, “We have to help Callie to graduate from high school; it’s the most important thing a foster kid can do.” And Stef is all, “Okay, for one thing, please don’t call her a foster kid; she’s our kid. And for another thing, you’re so pretty and let’s go have sex.” 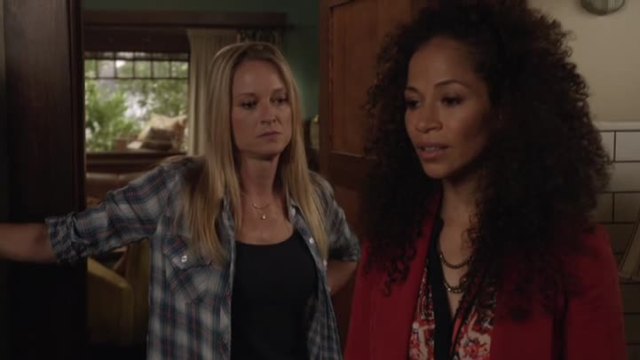 We just have to give her space to figure it out.

Callie gets a call in the middle of the night. I know you think it’s Brandon because he just won’t quit. But it’s not Brandon at all. Brandon doesn’t offend me in any way this week. It’s a miracle! Callie wakes up Stef to ask for her help, and next thing you know, a couple of cops are busting into an apartment where a drug-addled lunatic is waving a knife around at this drug-dealing couple. Once the knife guy is disarmed, Stef rushes in to find a bunch of foster kids locked in a room, crying and huddled together on the floor. Kiara (from Girls United) is there, trying to comfort the younger children.

Welp! I didn’t even make it to the credits this time before BURSTING INTO INCONSOLABLE TEARS. I wonder what would happen if I stopped watching The Fosters; I’ll bet my tear ducts would get all dried up like the desert and I’d go blind. 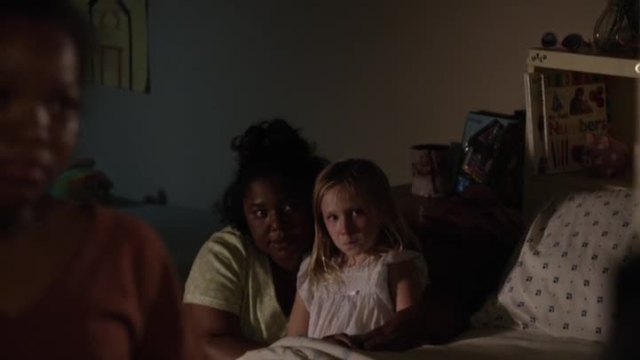 Stef brings Kiara home to sleep in Callie and Mariana’s room. You know what it is about Mariana, I think? It’s that she knows she could have been in Kiara’s position, easily been there, if Stef and Lena hadn’t been who they are. She tells Kiara she hopes she finds a forever home soon. And Callie says she hope that too. And also she hopes fucking Robert stops acting like a goddamn man-child and signs her adoption papers.

At school the next day, Wyatt stares at a vending machine for 20 minutes without blinking because he is tripping his balls off. Callie wanders up and asks if he keeps coming to school stoned because she broke his heart, and he’s like, “Yeah, Callie. I am so sure I go to bed every night and wake up every morning thinking about you and staying high to forget my pain.” He says it in a tone of full asshole-sarcasm, but you can tell it’s a real thing. Callie’s like, “Yeah, one of my best friends doesn’t have a place to live because her foster parents are drug dealers who are endangering her actual life, so I’m so sorry about your straight white guy problems of having your feelings hurt, bye.” 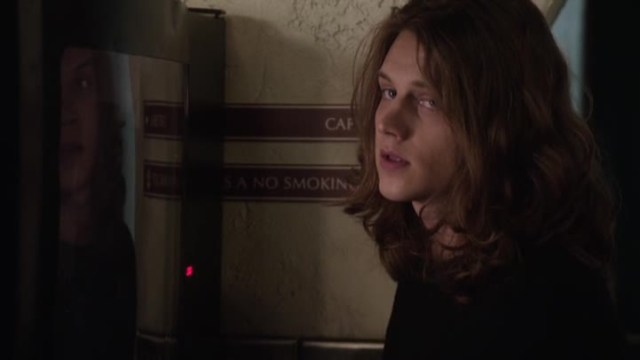 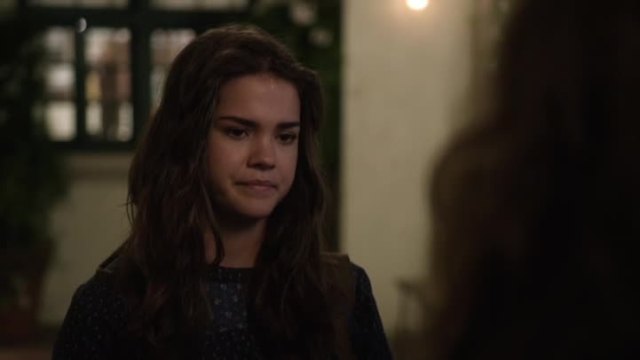 Okay, but your hair is like your one good thing.

Later on Wyatt asks her to run away with him again. Callie says she’ll think about it.

Also at school: Lena and Timothy have an awkward chat in her office about falafel and how they should hang out more even though his sperm is fatal and how the new principal is not telling Lena her business when it comes to academics. Jesus and Hailey have an awkward chat about how he won’t put her in the center of his universe, even though his universe also includes a mother who is a recovering addict and is potentially pregnant with a child belonging to his adopted brother’s dad. And Mariana and Emma have an awkward chat about how she is so much better for Jesus than Hailey and so much better for Mariana than Mat. She also says she and Jesus never would have worked out because he was threatened by her athletic prowess and book smarts.

All Mariana hears is, “Boys are threatened by book smarts.”