Santa “sees you when you’re sleeping,” but his right hand man — the Elf on the Shelf — serves a more sinister role in surveillance. Introduced in 2005, the cutesy book-and-doll combo instructs parents to hide the elf doll around their home in the days leading up to Christmas. Photos of the Elf on the Shelf peeking out of cabinets and diving headfirst into bags of candy have exploded on social media, but as the whimsical new tradition takes off, some writers are calling the elf’s role into question. The Elf on the Shelf keeps tabs on who’s naughty and who’s nice, or as the little guy says in the rhyming story, “At holiday time, Santa sends me to you. I watch and report on all that you do.”

Yep, that cherubic, pointy-eared pal is an insidious form of faux supervision that indoctrinates children into surveillance culture. If you think those are strong words, consider digital technology professor Laura Pinto’s take: the Elf on the Shelf is “a capillary form of power that normalizes the voluntary surrender of privacy, teaching young people to blindly accept panoptic surveillance and reify hegemonic power.” Woof.

2020 has been a big year for police surveillance in the U.S. Protestors have been identified and arrested using their Facebook posts and even an Etsy review. Facial recognition technology is on the rise. This is the year to reject surveillance culture, and the resistance starts at home. If you’re a parent with an Elf on the Shelf doll or if you’re a childless queerdo looking for wholesome holiday fun, I’m calling for a rebrand. The Elf on the Shelf as we knew him is dead. We need the Anti-Fascist on the Bookcase. 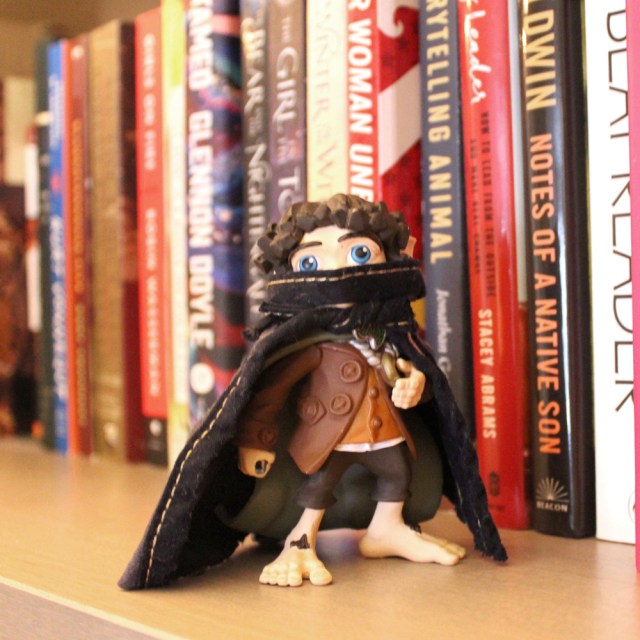 Your little Anti-Fascist (they/them/theirs) can take the form of a revamped Elf on the Shelf doll, or they can be any toy you have lying around your home. But unlike the Elf on the Shelf, who gets into mischief while he spies on you, the Anti-Fascist on the Bookcase should be completing useful tasks, inspiring your household to stay engaged with your community. Here are some ideas: 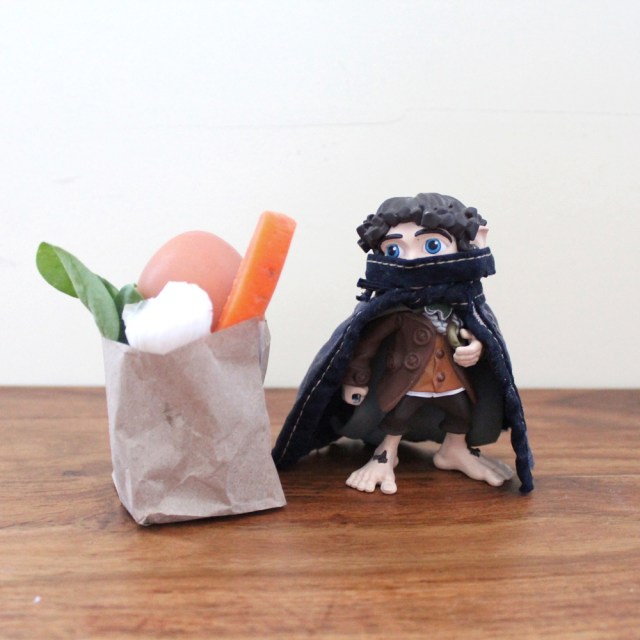 The Anti-Fascist on the Bookcase is well-aware that the Trump administration has mishandled the pandemic. While COVID-19 cases surge around the country, the Anti-Fascist wants to protect your at-risk neighbors. If you wake up early in the morning, you might catch them coming back from the co-op, where they’ve gathered everything on Ethyl’s list in a reusable canvas bag.

The elf pours through the news to learns “why’s,” “when’s,” and “how’s”
They always tune in to Democracy Now! 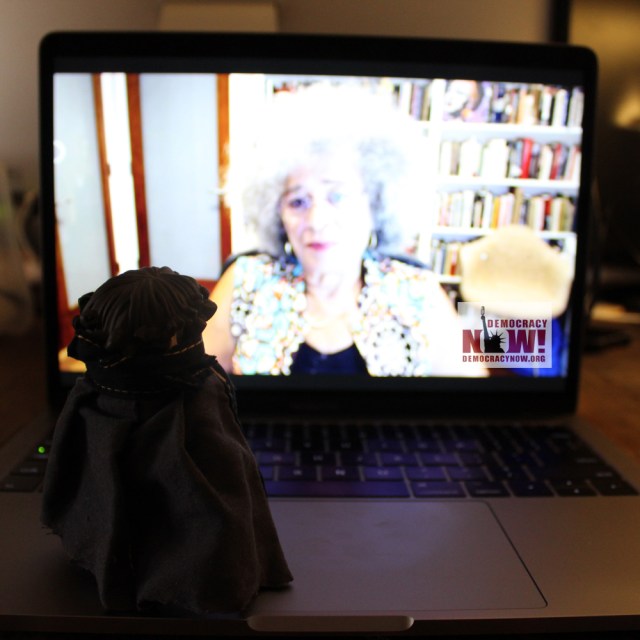 The Anti-Fascist on the bookcase knows that it’s important to consume a variety of news sources, and they put their trust in media that isn’t corporate-sponsored. If you leave Democracy Now! open on your laptop, you might catch them shaking a fist at the headlines. 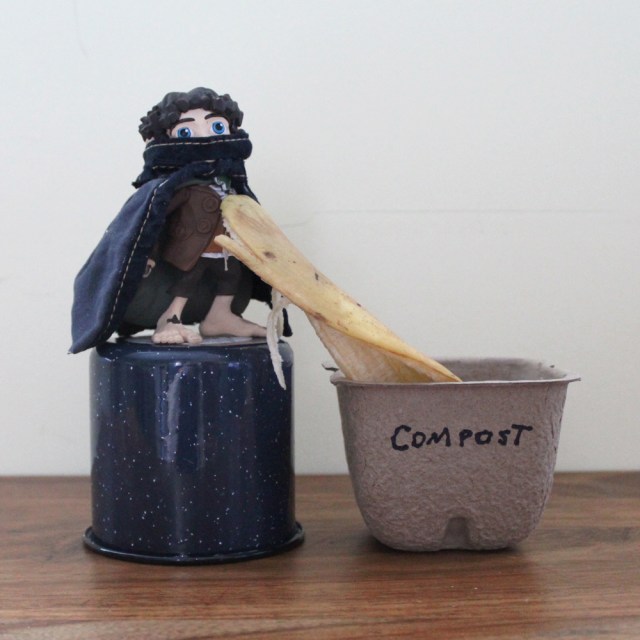 The Anti-Fascist on the Bookcase detests food waste, and they’re proud of you for composting! If you creep into the kitchen in the early morning, you might find them turning your food scraps into fertile soil.

At bedtime, this elf wants to read something new
They think that some Angela Davis will do 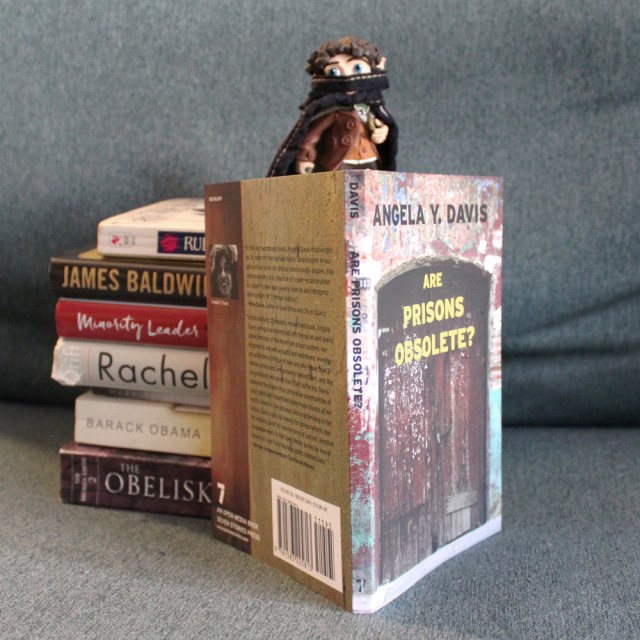 The Anti-Fascist on the Bookcase wants to stay informed about the dangers of the prison-industrial complex. Catch them next to your bed, where they’ll be cuddled up with a copy of Are Prisons Obsolete?. 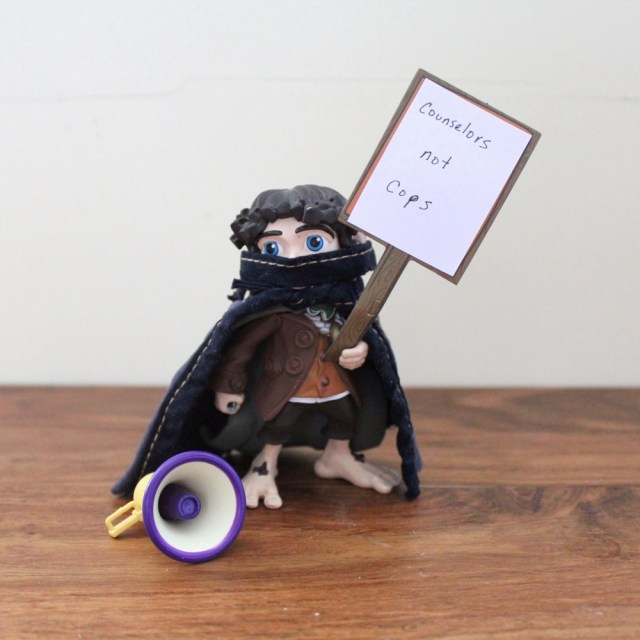 The Anti-Fascist on the Bookcase knows that electoral politics are not the only means of creating change. They believe in the power of protest, and they want you to have the perfect sign for the next time you march into the streets.

While waiting for capitalism to fall,
The elf sews a patch on your old overalls 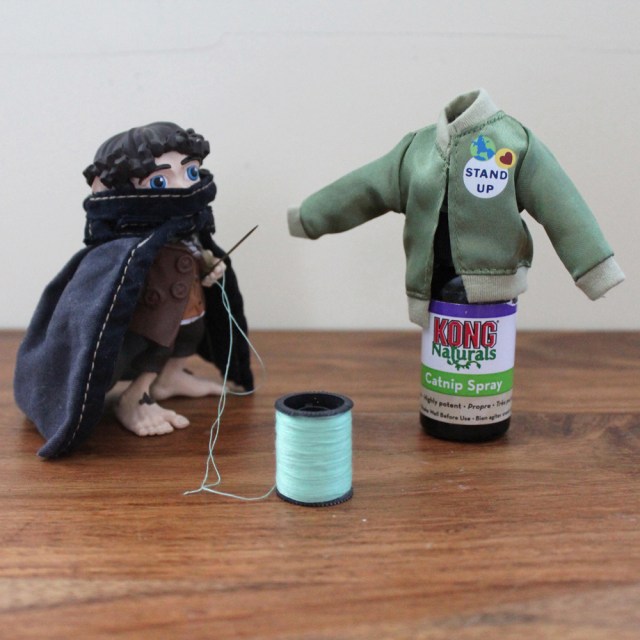 The Anti-Fascist on the Bookcase strives to live outside of capitalist system as much as they possibly can. They don’t want you to have to buy new overalls once you wear through the knees, so you might see them with a needle and thread repairing what would otherwise be replaced.

“Jails and prisons are broken!” the little elf cries
They send their spare change to the people inside 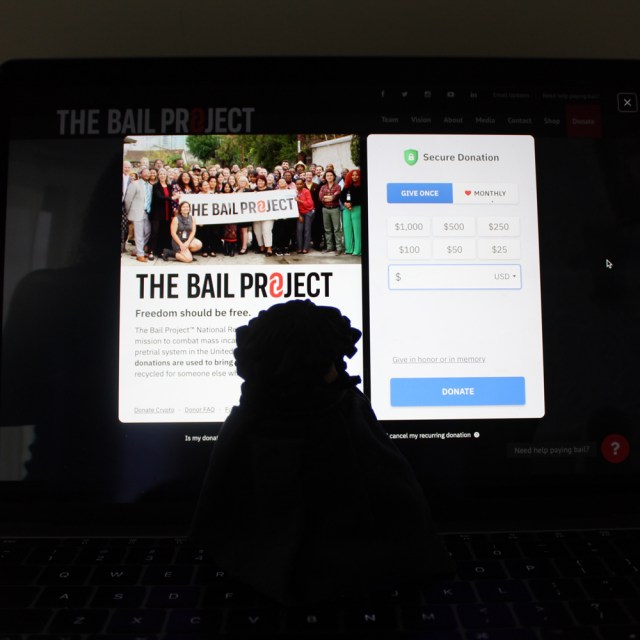 The Anti-Fascist on the Bookcase know that the cash bail system criminalizes poverty. You might catch them sending some dollars to a community bond to help community members in need of assistance. 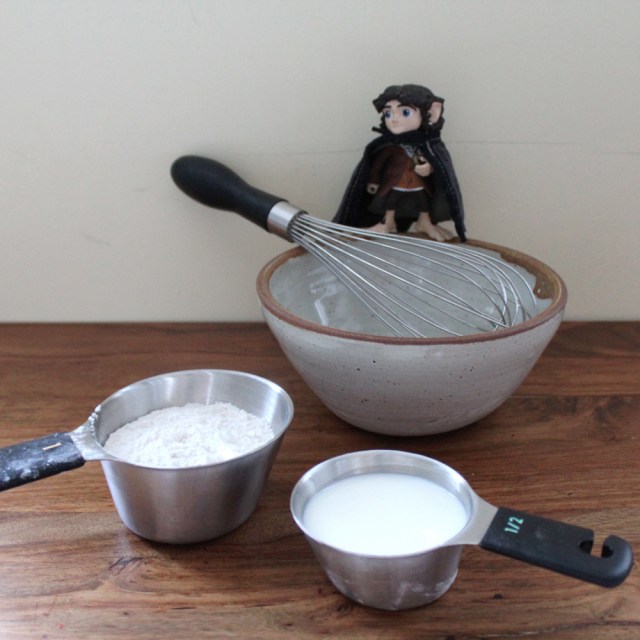 The Anti-Fascist on the Bookcase always asks about food allergies before they whip up a batch of holiday treats. You might see them covered in rice flour while they make morning glories for Nora and Jess.

As your houseless neighbors face winter’s cold chill,
The elf brings them blankets and coats and good will 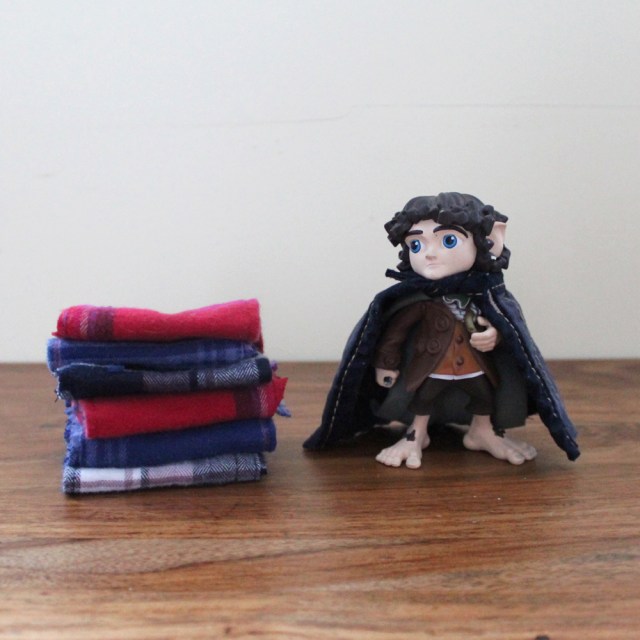 The Anti-Fascist on the Bookcase wants your local tent city to safely make it through the colder months. Catch them sneaking out of the house with your unused winter gear. They’re bringing sleeping bags and puffy coats to community members in need!

This elf wears a mask, and they’ll get a vaccine
They’re slowing the spread of COVID-19 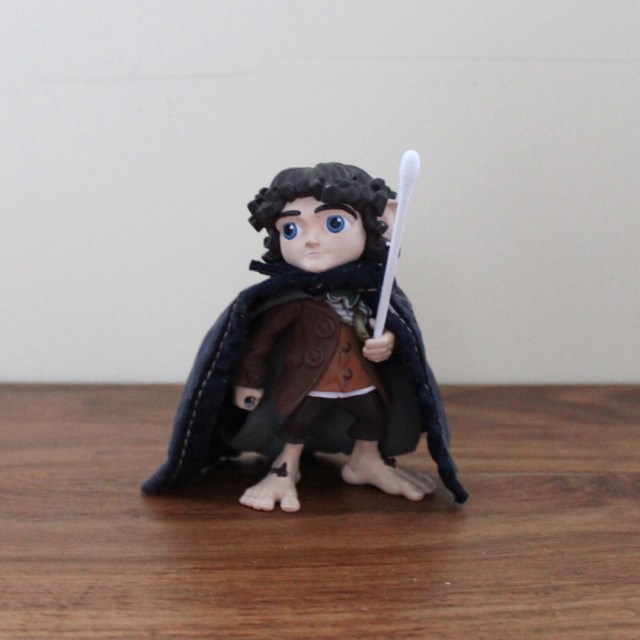 The Anti-Fascist on the Bookcase always wears a mask in public and practices social distancing, but they always get tested in they think they might have been exposed to someone with COVID-19. The nasal swab is uncomfortable, but the Anti-Fascist doesn’t mind — they know that regular testing is a critical means of keeping you and your community safe.

Ro has written 82 articles for us.