This episode is special not only because it’s a flashback episode, but also because it is Chyler Leigh‘s directorial debut. That’s right, fam, we have a queer woman directing her own lesbian character when she was just a baby gay. You love to see it.

Previously on Supergirl, Kara got trapped in the Phantom Zone so Nia and Brainy went back in time to get Kara’s DNA with CJ Grant and some Glam Rock Aliens on their heels.

We open where we left off, with Brainy and Nia in an energy dome the Glam Rock Aliens trapped them in. They want these cuties for their menagerie, but Kara hears Brainy and Nia talking about being in danger and flies off to help them. She’s flying around the clearing getting ready to fight when Alex and Kenny catch up, momentarily distracting her. 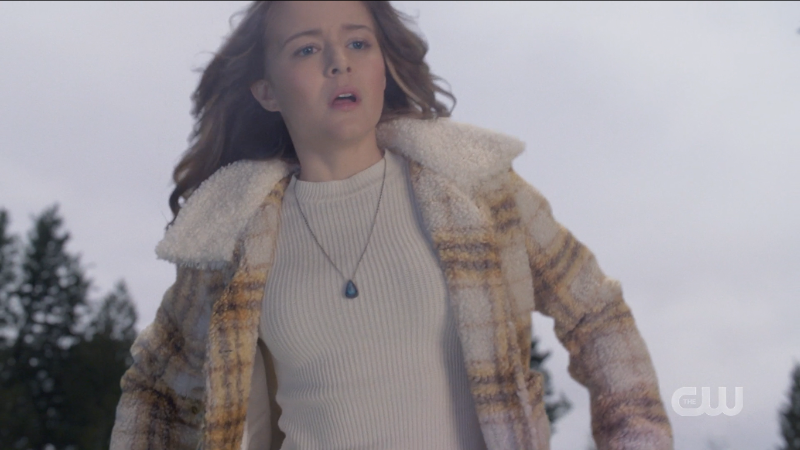 Kara doesn’t fly around in her casual wear enough, this is hilarious.

She eventually gets back on course and Brainy and Nia help her get control of the situation, but unfortunately CJ Grant caught the whole thing on her drone camera.

Team Mini Super goes back to the makeshift fortress and Alex thanks their new friends for their help. Brainy assures them that the Glam Rock Aliens will be dealt with by the proper authorities, and Kenny is thrilled to learn there are space cops.

As they get ready to say goodbye to Brenda and Brandon, Kara thanks Nia for being such a good friend to her these past two days. Kara liked not feeling like the only alien, she liked feeling different but not alone. Nia promises her that it gets better. 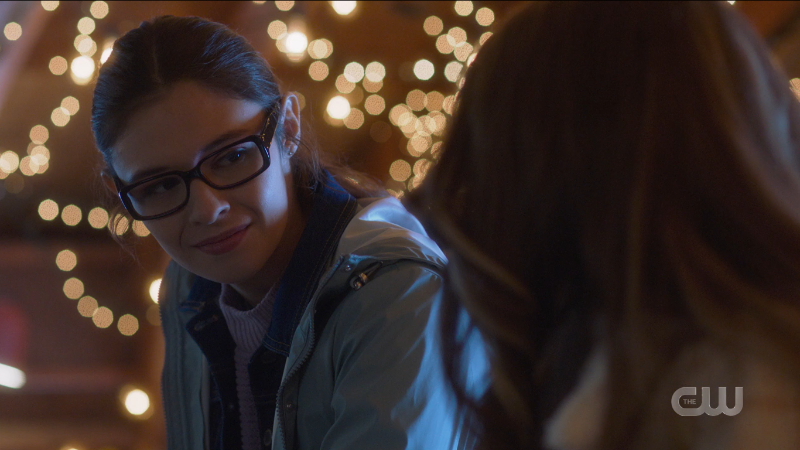 The queer coded language directed toward Kara in this episode was out of CONTROL.

And so, the immediate threats seemingly dissipated, Nia and Brainy get ready to go back to the future, and Kara and Kenny get ready for prom.

But before they take off, Nia gets another dream of the cougar and the cage, but this time there’s something cleaning on the top of the cage, and the cougar has escaped. Nia can’t quite get a grasp on it, and Brainy shrugs it off as a glitch in the dream matrix, but Nia is left with a nagging feeling there’s something she’s missing.

Alex drops Kara off at prom and Kara apologizes for defying Alex’s orders to not super around Midvale all willy nilly. But Alex stops her; Kara was amazing and she’s in awe of her baby sister. In fact, she’s proud, and she says as much. 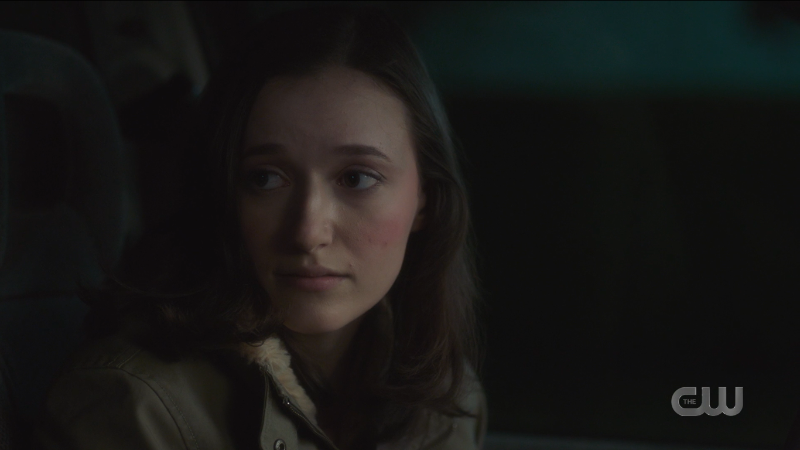 I know you’re probably tired of me saying this but in cast it’s the last time we see them: THESE YOUNG ACTRESSES NAILED IT.

Alex explains that she was a little jumpy about Kara using her powers because when Jeremiah unfairly put the responsibility of taking care of Kara squarely on Alex’s shoulders, Alex felt like she had to put her life on hold. But then she went to college and was starting to get a sense of freedom, and watching Kara risk having her powers exposed made her feel like she was going to have to take a step backwards, so she lashed out. But Kara says Alex wasn’t all wrong in the things she said; Alex was right that Kara has to make a decision about college and tell Kenny what it is. Alex knows that whatever choice Kara made will be the right one, and so do I because the Legends haven’t shown up to fix the timeline yet. What has showed up, though, is the meteor shower we’ve all been waiting for. 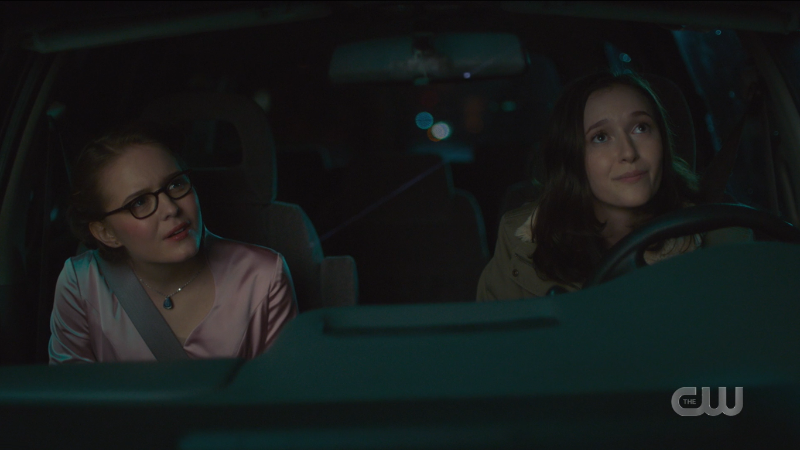 “If you make a wish, stars will wash up on the beach in the morning.”

Kara tries to figure out how she’s supposed to wear a masquerade mask and her glasses at the same time, but Alex suggests she ditch both. She has to wear a mask every day, why not go without one tonight?

Nia, however, doesn’t care how often she wears a mask, she knows she rocks it, so she does, indeed, rock it. She walks out in her prom dress and takes Brainy and my breath away. 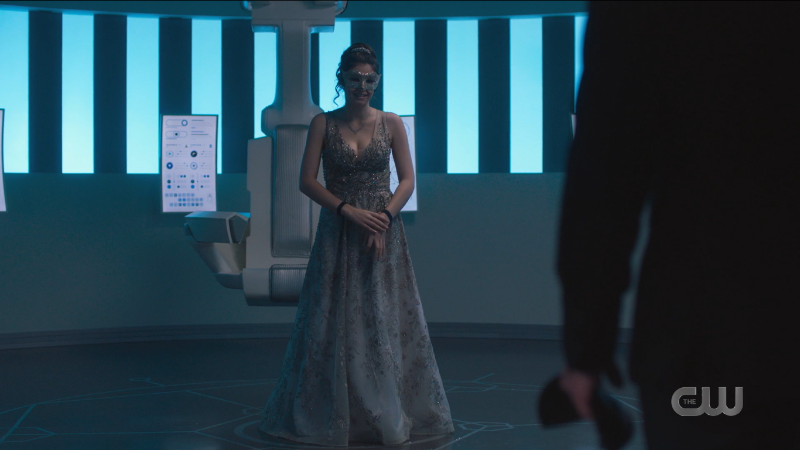 Nia is still stressed about not knowing how to interpret her dreams and before she can ask one last time for permission to call her mom for help, Brainy holds her and tells her that she will figure this out. They dance and it’s adorable and then it’s time to go to the Prom because the meteor is about to hit.

CJ Grant is poking around the woods like she’s looking for scoop on the Teddy Bear Picnic when she instead stumbles across the Glam Rock Aliens’ spaceship. She accidentally on purpose releases them – on purpose because she pressed the buttons but the accident was she got herself captured when all she wanted was a statement.

Kenny and Kara meet in a classroom to exchange flowers and that’s when I realize…it’s kind of weird that they’re having their senior prom in the school, right? We had our regular school dances in our cafeteria in high school but junior and senior prom were off-site. But I guess, why pay for an extra set when we can’t even go all the way into the dance during a pandemic anyway. 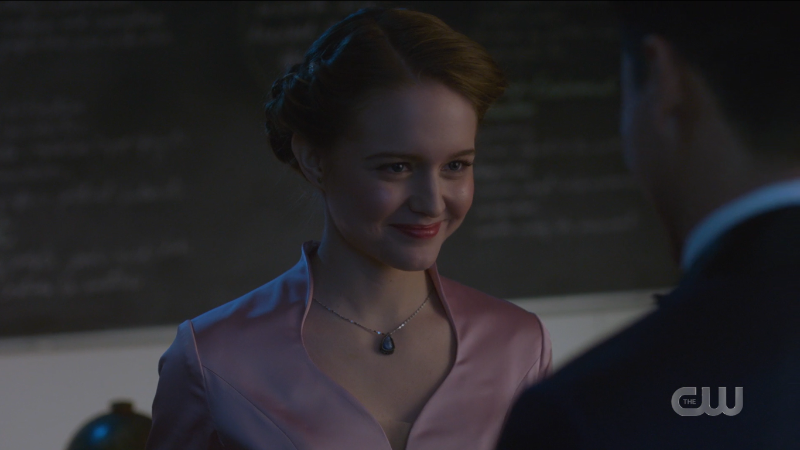 It doesn’t seem like they know any other teens anyway, so this is fine.

Kara tells Kenny that she loves him and is this close to tell him what she decided about college, and the tone in her voice makes me feel like she was going to tell him she’d stay, but before she gets her full thought out, she hears a meteor heading for the school and flies out to stop it.

Alex sees a bird, no a plane, no her baby sister flying through the air, punching a space rock, then falling to the ground at an alarming pace. And even though this is old hat to present-day Alex by now, this is the first time for Teen Alex, and she is stressed, and thus relieved to see Kara is fine. 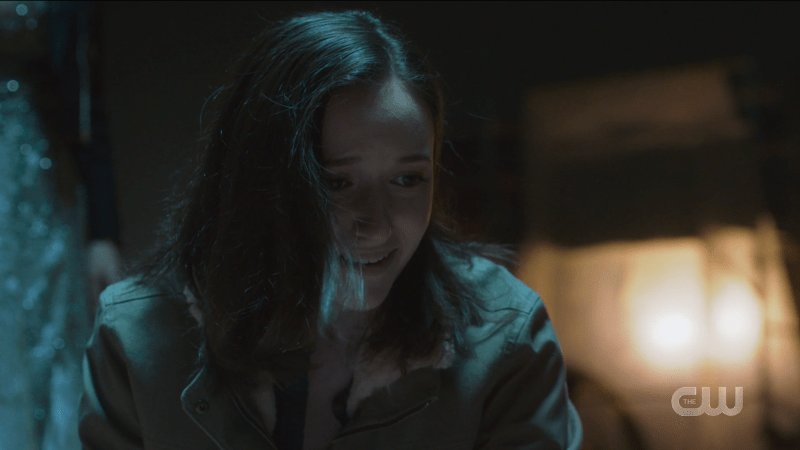 Brainy and Nia see this all go down and can tell something isn’t quite right so they rush off to find out what happened.

When they get to the gym, they find Alex leaning over her Kryptonite-poisoned sister, seeing her hurt for the first time. Before she can process what even is happening, the Glam Rock Aliens show up and start scanning for a Kryptonian.

Kenny knows this is his time to shine and volunteers as tribute, getting himself beamed up like some kind of Sara Lance. It’s not long before they realize that he’s human (“No one wants to see a human” = mood) so they decide to use him as bait instead.

Nia and Alex help Kara walk down the hall and try to convince her she can’t just run off after Kenny in this condition. 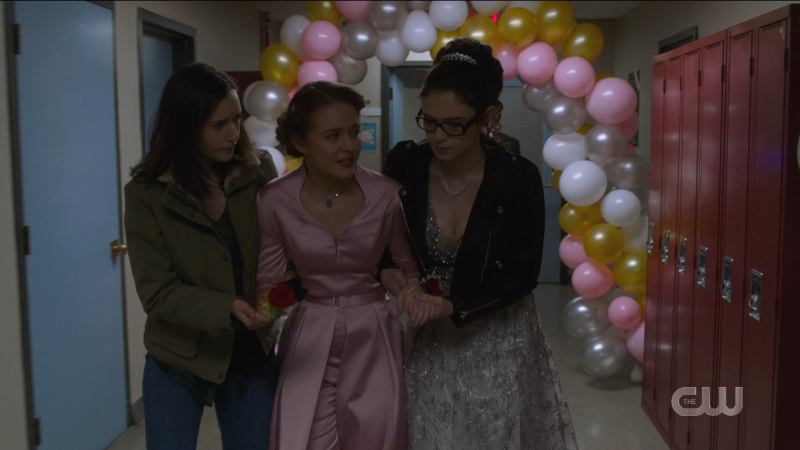 This frame doesn’t do this hallway shot justice. Director Chyler Leigh nailed it.

The Glam Rock Aliens send a message to all aliens, confusing the hell out of Alex, and Brainy and Nia step in and say they’ll fix this. When Kara resists, Nia uses her dream powers to put Kara to sleep, and they lock Kara and Alex in the room so they won’t follow.

On the spaceship, Kenny gets thrown into a cell with CJ, and he expresses how useless he feels. CJ Grant is one to throw insults but not one to let someone insult themselves, so she gives him a pep talk, calling him the wrong name but calling out his heart correctly: he’s smart, he’s brave, and he has the makings of a hero.

Back in their own kind of cell, Kara tells Alex that she feels bad for ruining prom night. She wanted one normal, super-free night before she started supering full time with him. Alex tells her that she has to seriously consider coming out as super; coming out will make you less normal, and it’s not something you can take back, says a worried closeted lesbian. 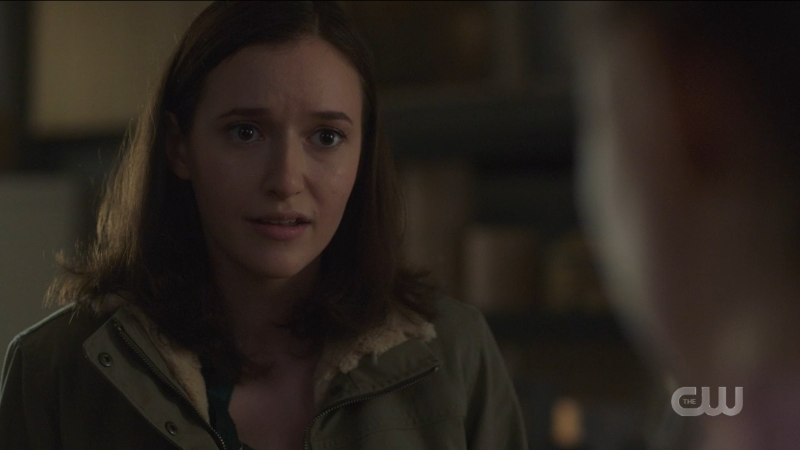 “If you say it out loud…the whole world is gonna change.”

Kara doesn’t care if it exposes her though, she needs to save Kenny. She tries to break out but she’s still too weak so Alex picks the lock, because apparently she’s in college as a Rogue major. The open door exposes Kara to the full moon, and she absorbs the reflection of the sun from it and is revitalized so she zips off after Kenny.