This Supergirl Recap 6×05: Prom Night! is brought to you in part by* the movie Avatar, The Vampire Diaries, and the music video for Cobra Starship’s Good Girls Gone Bad. And also my undergrad graduation speech by Hilary Clinton.

*Not really those are just things that were popular in 2009

Previously on Supergirl, the Superfriends stopped the spread of the Phantom plague and are going to use the Prime Phantom to find Kara but they need some of her DNA, and since apparently even her hair is indestructible (did she use Kryptonian scissors to get bangs?) they have to go back in time to get some. Honestly I don’t care if this isn’t the most logical solution to their problem, I’m thrilled we’re going back to Midvale.

The Superfriends meet up in the tower to go over the plan; in May 2009, the night of Kara’s senior prom, Alex came back from college and drove her, and a meteor almost hit the town, until Kara flew up and punched it. The meteor had Kryptonite though, so while she stopped it, Kara ended up crashing through the gym ceiling, and it was the first time Alex ever saw her sister bleed.

Since Alex, Lena, and J’onn were all of traveling-alone age, they can’t go back in time and risk meeting themselves and causing another CRISIS, but since Nia was 12 and Brainy was…in the future? Maybe not even born yet? On another planet? For whatever reason, they’re the only two that can go.

Alex tells them what she remembers about this timeline’s version of the past: Kenny is very much alive and goes with Kara on mini missions as a self-described Scooby Duo (be cuter, I dare you), but on the sly so the papers reported that Midvale was the “luckiest town” and had no idea that there was an alien among them.

Alex is stressed that she can’t go so she looks Brainy in the eye and possibly through his soul and threatens him not to mess up her past. 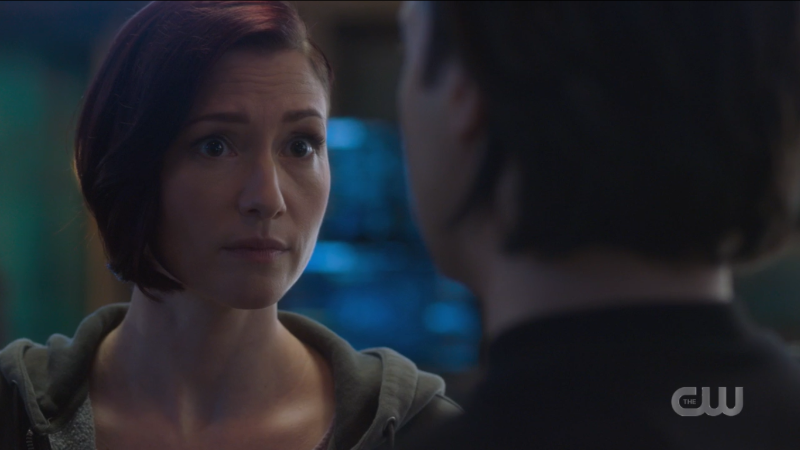 “I’m tempted to have you shake me and tell me to come out already but also that would retcon some lovely storylines so maybe just leave me alone.”

Briany is offended, though he doesn’t express as much until he’s on the timeship, dressed in a tux and stress eating potato chips. Nia is also dressed up, in a very flashy prom dress, and I was in college in 2009 but it seems a little dated; which is fine by me, she looks amazing. Brainy reminds her of some 2009 slang like chillaxing and WAZZAAHHHHH.

Nia notices Brainy is still inhaling chips so she reassures him that they’re going to do great, and they don the most effective disguise known to this planet: glasses. 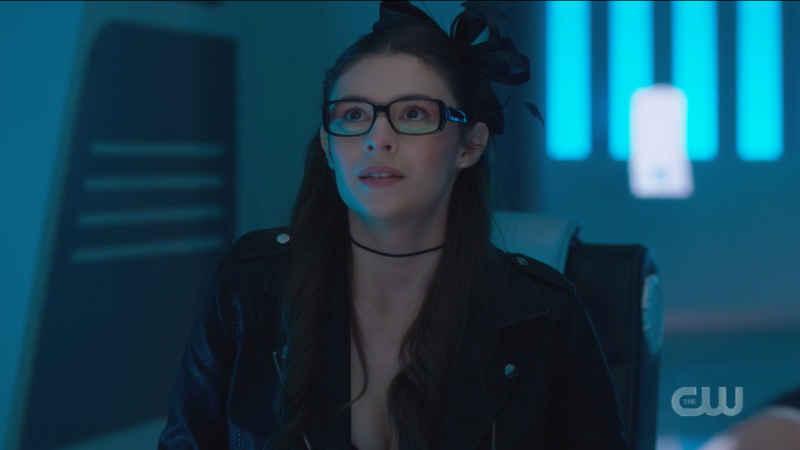 :awed whisper: Who IS she?

In 2009, Alex is at a diner with Kara and Kenny and reading the news article about Midvale being the “luckiest city” and is suspicious of the teens and their mischief, but Kara tries to change the subject by asking why Alex cancelled her trip the Europe. Alex throws the deflection right back at her, and when Kenny gets up to get their milkshakes, asks Kara why it seems she hasn’t told her boyfriend that she’s planning on going to her dream school of National City University, not Midvale College with him. 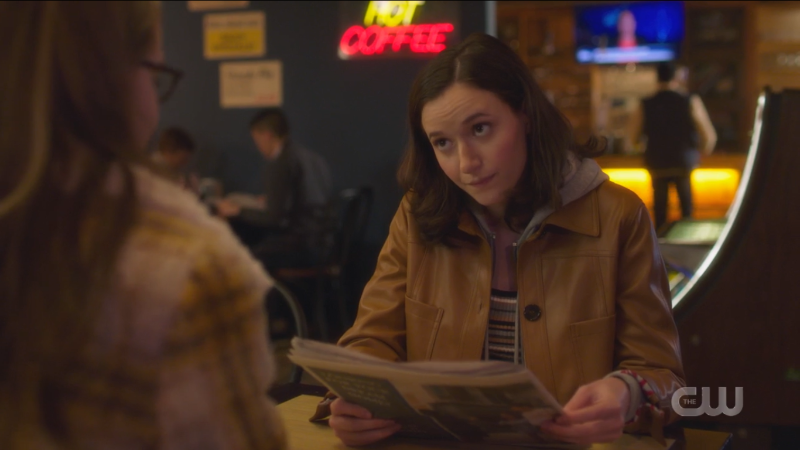 These wee actresses are so good at imitating their grown counterparts, it’s almost superhuman.

Kara waffles between what she’s decided to do and/or tell Kenny and is grateful when she hears something in the distance and her and Kenny spring into action. This confirms Alex’s fear that Kara has been “supering” without her and she’s so worried about her little sister getting caught. She frames it as putting everyone, including Eliza, in danger, but you know she’s scared for Kara, too.

Kara says she could just fly to the baseball field real quick to see what crashed there, but Alex says absoLUTEly she cannot. But Alex is willing to compromise and will let Kara investigate, but only if she lets Alex drive her there.

And unbeknownst to them, another powerful being has also careened into town, but this one is a human who is going by CJ Grant and ready to take the world of journalism by storm. 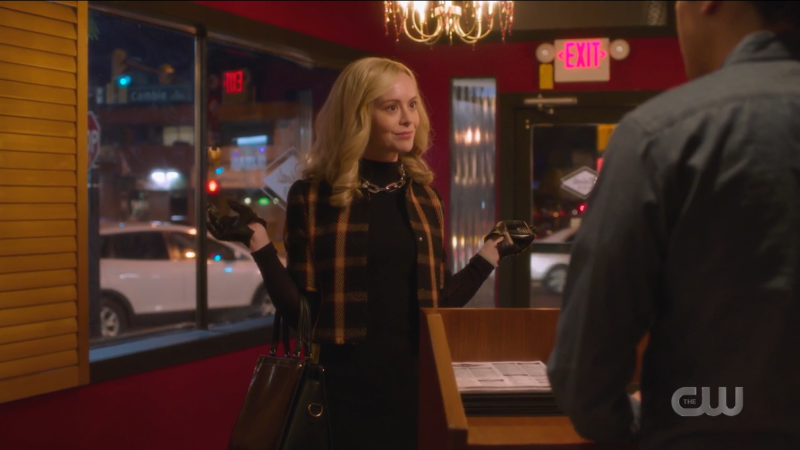 Honestly this actress nailed Cat Grant’s attitude and mannerisms, too.

When Brainy and Nia crash land, they realize the prom is a masquerade themed, but by a happy accident, they landed a day early, so Nia reassures a very wound up Brainy that everything is going to be okay. They just have to avoid getting caught.

But since they didn’t consult the Legends before going on this journey, they haven’t learned not to say out loud the thing they want to avoid because just as Nia says this, Kara, Alex and Kenny walk up. Nia greets them with a WAZZAHHH and it’s freaking adorable.

Nia and Brainy awkwardly lie about being psychic aliens named Brenda and Brandon and accidentally let it slip that their ship is busted. Brainy pulls Nia aside and asks how they’re going to get out of this, absolutely panicking about how they’re not supposed to interfere in Alex and Kara’s life, and at the same time, Alex begs Kara not to interfere with these aliens. 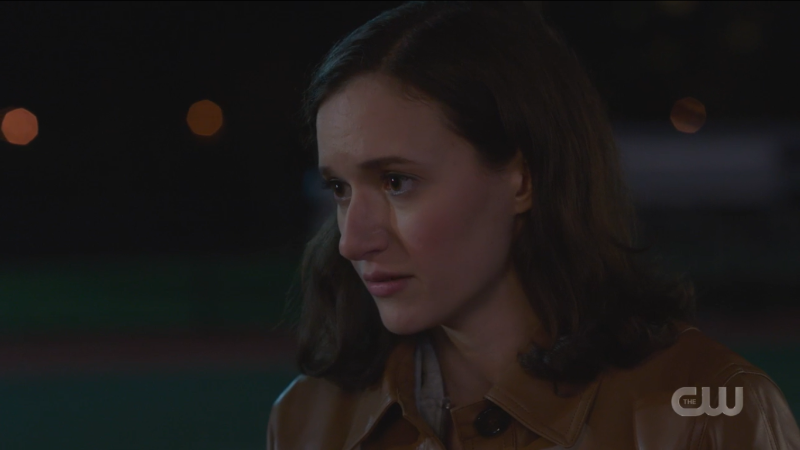 Alex has yet to learn that saying “Kara no” is a surefire way to ensure a “Kara yes.”

But Kenny knows just what the SuperDuo should do and Kara starts to create a hole in the ground to hide Nia and Brainy’s ship. Nia and Brainy join them with their own powers, and Kara looks downright delighted. They decide that the girls will take Nia and Kenny will take Brainy and they’ll regroup about this dilemma in the morning.

Meanwhile, a pair of blue Glam Rock Aliens want a Kryptonian for their collection, and since Superman proved too difficult to capture, they’re going to snag the second one instead.

Kenny is excited to have Brainy over, since Kara is the only alien he knew, and ends up using his clever sidekick brains to help Brainy come up with a plan to MacGuyver a 3D printer using items at the high school so Brainy can fix their ship.

Meanwhile, Kara and Nia are having an adorable sleepover, talking about losing their moms and being aliens in a human world. 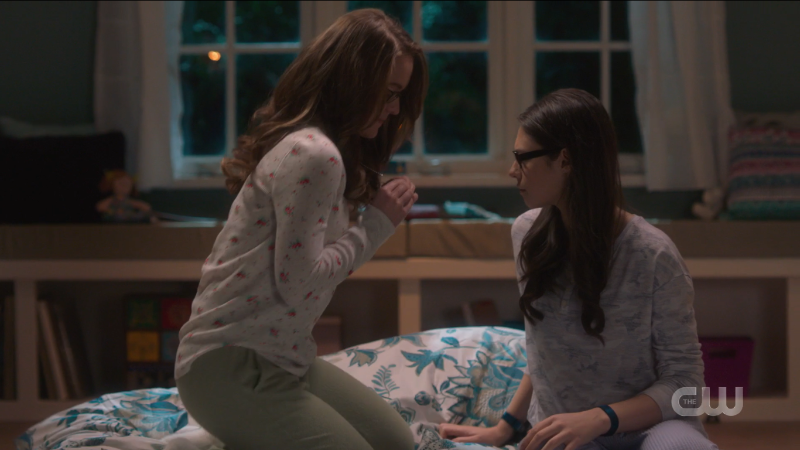 “So you see, it’s just me and Clarke left. Not a single other Kryptonian in the universe. Not my dad, not my aunt, not my mom and an entire village of people, nope not a one.”

Kara says, “I love my Earth family, but it’s not the same as being with people who really understand you.” Which is how I feel about my own Earth family, and how I think a lot of us queer people do, which is why we often build families of our own. Nia tells Kara that she understands, that her mom passed down her powers but died before she could help Nia learn how to use them properly. And hilariously, Kara tells Nia, “It gets better.” Really hitting that metaphorical nail on the head. Nia talks about how she sometimes feels like just hearing her mom’s voice again would make everything better, and then slowly she realizes that she could, theoretically, call her mom.

But before long Kara and Nia are talking about their powers and they start experimenting with them together. 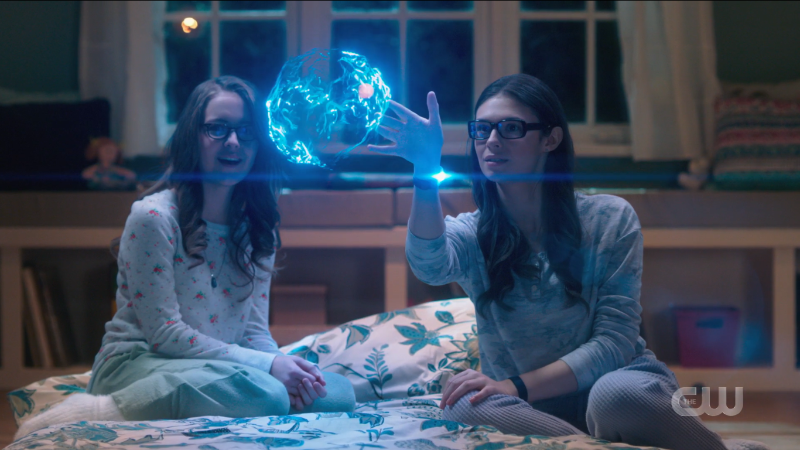 “What is this feeling, so sudden and new.”

It’s very cute and sweet. Poor, stressed out, overprotective Alex comes in and catches them though and scolds them to stop. She uses her firmest boss voice to tell them that they’ll help them fix their ship but then Brenda and Brandon have to leave immediately, and Nia promises that’s the plan. Alex softens a little, maybe not used to having someone actually listen to her and not push back like Kara often does, but Nia’s not new to taking orders from Alex. 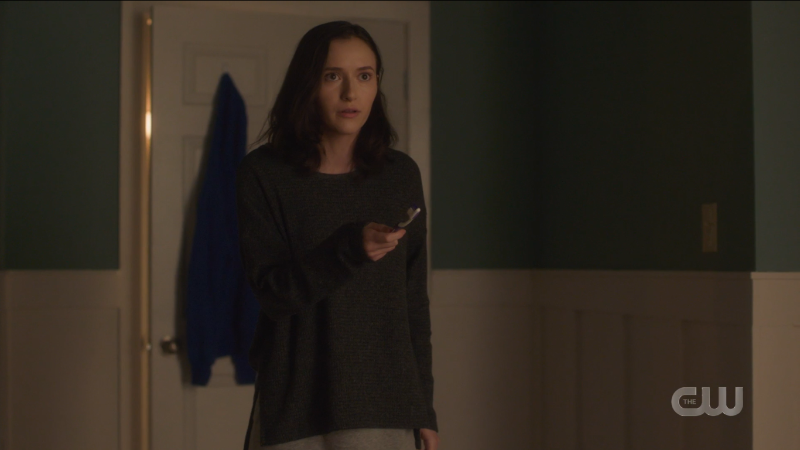 OBSESSED with Alex waggling her toothbrush at Kara and Nia having too much fun at their sleepover.

That night, Nia has another dream about Midvale High, but this time she’s attacked by a pink panther. She wakes up with a start and, realizing she doesn’t know what to make of that dream, thinks again about how easy it would be to call her mom.

The plans of the day are: The girls are going to Eliza’s job to steal a geode they need while the boys go the high school to 3D print the part they need. Go team go!

While in the computer lab, Kenny asks Brainy all about his adventures. He loves being Kara’s sidekick and wants to help her save people and stop crime forever. In fact, he even made them a base of operations like Superman’s Fortress of Solitude. It’s very sweet! He’s a good boy! Which makes me fear for his life!

“CJ” Grant is ready to bust free of her gossip column so she is determined to get to the bottom of this Midvale Mystery. She interviews who she thinks is Dr. Eliza Danvers but is actually Alex with her mom’s badge, so Alex takes this opportunity to try to throw Cat off their scent while Kara and Nia go find the geode. 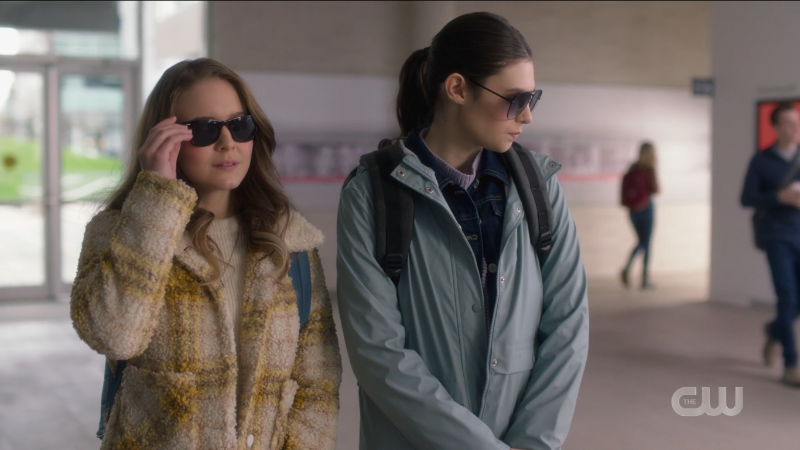 Working together and with a little help from Nia’s powers, Kara and Nia get what they need and save poor Alex from her interrogation.

Back at the high school, Brainy runs out of snacks so he sneaks out to the vending machine, when his yelling at an unfallen snack gets him recruited for the Glee Club. I see they use the Mr. Schuester method of getting new members at Midvale High. By the time Kenny finds Brainy after school, he’s the star of the baseball team, and has joined many clubs and learned about how different teens handle stress besides stress eating. Kenny tries to get Brainy to come back with him, but it isn’t until Kenny invoke’s Alex’s name that he agrees to leave the diamond.

Next page: Nia is a Dolly Parton stan, obviously!