Hi, friends. To quote Kara Danvers, “I know some of you are scared… just remember why we do this. We do this… for the people!” We’re here, together, to discuss Supergirl. I went into the back half of this season with two things in my head: One, they probably filmed at least two of these episodes before the hiatus, before the supposed shift. Two, keep an open mind and an open heart.

So I entered this episode with a blank slate, and I think it helped. I didn’t hate this episode, which honestly is all I could hope for at this point. I hated some parts of it, but we’ll get there. Overall though, it had some of the fun elements of Supergirl: female supervillain, fun guest star, quippy lines, found-family bonding. If they can lean into these things, they can find themselves again.

We open with one of my favorite tropes: Kara is giving a serious speech about how important what they’re about to do is, her friends all lined up, listening intently. And then they cut to the mission, and it’s karaoke!

It’s goofy and fun and Kara is doing the robot and Alex is crying into her drink one minute and giggling at James slaying the next. 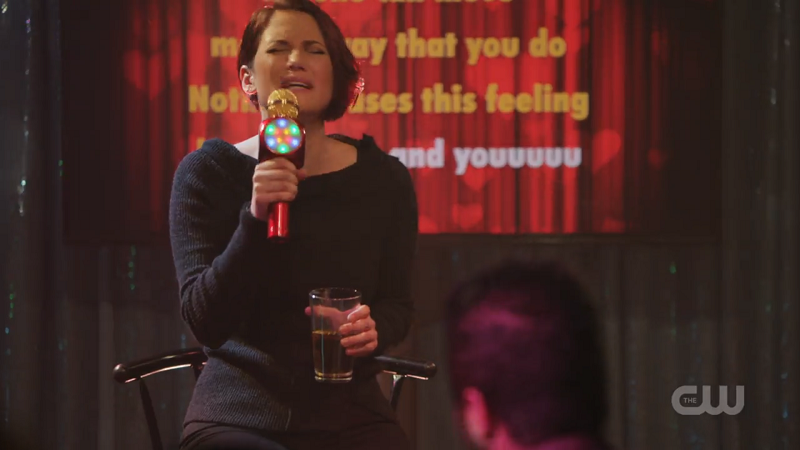 J’onn and his dad even join the fun, to everyone’s delight. It’s all fun and games until Winn gets on stage to do his song and the news catches his eye: his father has died in prison. He runs outside and James follows, reassuring him that whatever he’s feeling — or not feeling — is okay. It’s very sweet.

And what Winn is feeling is… complicated. He goes to his father’s funeral, but can’t bring himself to offer any final words, and chucks his handful of dirt at the coffin unceremoniously. As soon as the funeral ends, Winn’s mother shows up, surprising everyone, except apparently Winn. 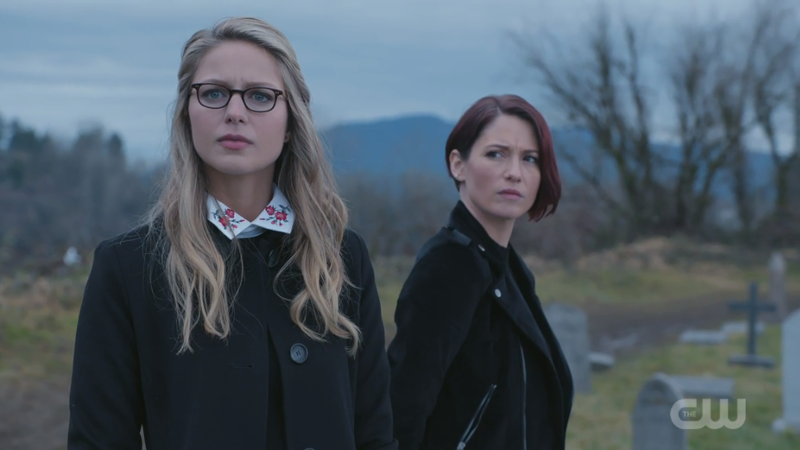 “Is this why Lena is missing? We had to save up for Laurie Metcalf?”

Their conversation is interrupted though because the coffin explodes.

I’m only going to talk about Imra’s husband twice in this episode, and this first time it’s because my anger was so deep I can’t contain it. This crusty baguette had the AUDACITY to come up to Kara and be like, “Wow okay so I didn’t believe you when you TOLD me that all my lying hurt your feelings, but someone just lied to ME and MY feelings are hurt, so NOW I understand that maybe your actions had consequences? The #1 symptom of a lifetime of privilege is an extreme lack of empathy and this Daxamite is the epitome of it. I do feel like they’re trying to make him a better person. I do understand that they can’t snap their fingers and have him be 100% different overnight. But if he doesn’t get his act together AND ALSO take three giant steps back in the next few episodes, I am going to be one grumpy girl.

Anyway when they say their goodbyes they both say “buddy” a lot as if to convince themselves that’s all they want to be which is also what Kara and Lena do all the time JUST SAYING.

Winn’s mom is being housed at the DEO and he’s mad because she left him when his dad snapped. She insists it was for his own safety but he doesn’t want to hear it. Their conversation is interrupted by a Wizard-of-Oz-esque message in the sky telling Mary to surrender and a bunch of killer flying monkeys attacking the joint.

Supergirl uses a building antennae as a bo staff and fights off all the monkeys on her own like the damn badass she is. 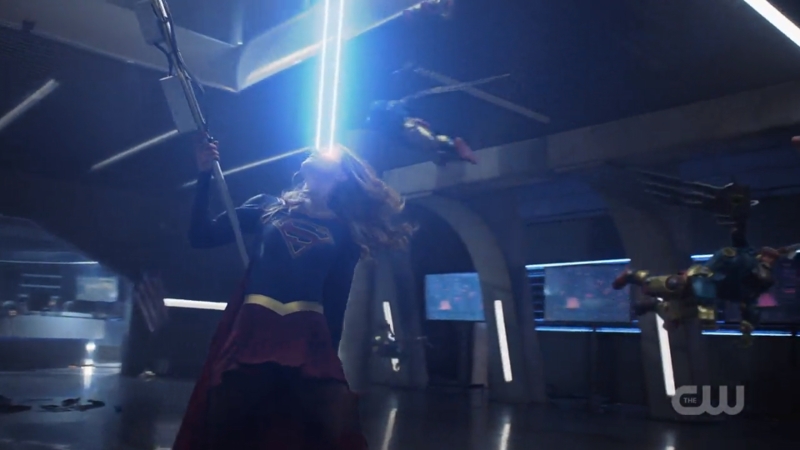 Meanwhile, I guess our resident lesbian has decided that Kara and the boys have this Mama Winn storyline handled, so Alex invites herself over J’onn and Papa J’onn’s house for dinner. They have a lovely chat about racism, and about how J’onn doesn’t want to change the color of his human skin just to feel safe; he’d rather change the world. Throughout their conversation, Alex has her eye on Papa J’onn, worried about a few things she’s noticed throughout the day; more specifically, a few things he’s forgotten.

The proof comes when J’onn is in the kitchen I assume making a pie from scratch with earbuds in. Alex and Papa J’onn are talking and Papa forgets that he had granddaughters. Alex is patient and kind and says she had a grandmother who started to forget things, too. Papa J’onn admits that he already knew he had the Mars version of Dementia, which loosely translates to “memory decay.” Alex’s heart breaks all over her face and so does mine. Alex wants to help him tell J’onn but Papa doesn’t want his son to have to go through losing him all over again so he yells at her to get out. 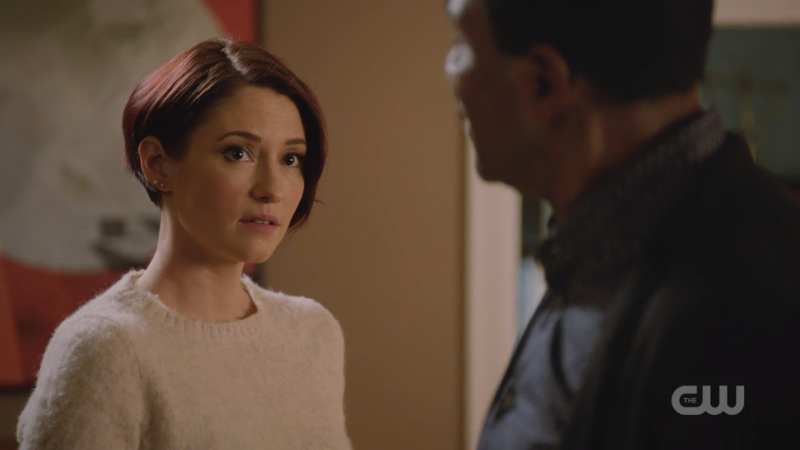 I think Chyler Leigh is an empath.

And get out she does, looking more sad than anything.

Back at the DEO, James talks to Winn and it’s a very sweet conversation about their feelings, and how sometimes the past is in the past, and sometimes life gives you the chance to try a relationship with someone again. Maybe Winn’s mother didn’t act the way he thought his mother should, but maybe she deserves the chance to explain. Maybe she did the best she could. Just maybe.

At the same time, Mary and Supergirl bond over how smart Winn is and flying monkeys and it’s very sweet and cute. She had hoped leaving him had been the right thing to do, and the fact that he’s thriving means maybe it was. 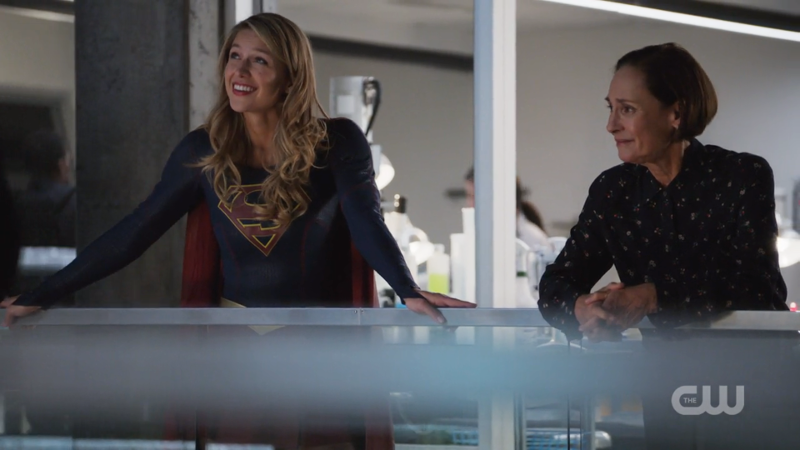 I loved this interaction very, very much.

So, thanks in part to James, the next time Winn’s mother tries to open up to him, Winn listens. She explains the night he remembers as a failed attempt at going to Disney was actually a thwarted attempt to go to a domestic abuse shelter. Winn starts to realize now that the memories he has might not have been the whole picture. And it’s a strange and uncomfortable thing to, as an adult, start to understand your parents as fellow adults. And while not everything they’ve done is necessarily and automatically forgivable just on account of them being humans, sometimes seeing past-them and present-you as peers can help gain some insight into why or how certain mistakes were made. And it can shift your perspective just enough to try to have a different relationship with them. Maybe it will never be parent/child, maybe it’s too far gone for that. But that doesn’t mean you can’t find a way to be in each other’s lives in a way that works for both of you.

Downstairs, J’onn tries to get out of Alex what happened with his father, but she says it’s not her place. She assures him she had a great time though, even though her eyes are the saddest puppy dog eyes ever. 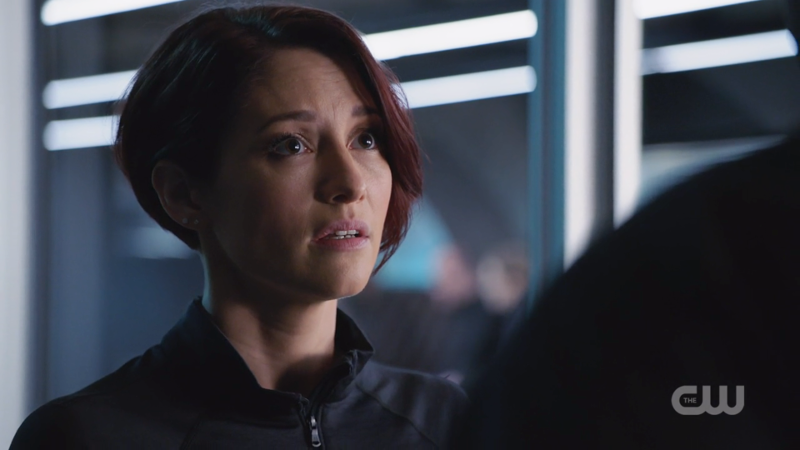 The big bad of this episode ended up being Erica Hahn, who was the maintenance worker in the jail where Winn’s father was held, and ended up becoming his apprentice and promising to carry out his last wishes that his ex-wife be tortured should she ever try to contact Winn again. I listen to this podcast called Wine & Crime and I just listened to their episode on Stockholm Syndrome and learned that there’s sort of an inverse version of it called Lima Syndrome and I think maybe that’s what happened here; she grew overly attached to this inmate and ended up sharing in his delusion. But Supergirl and her merry men come in to save the kidnapped Mary, and Winn and Mary end up working together to save the day.

https://gph.is/2JPMwTw
(courtesy of Nic the Gif Queen)
Back at another karaoke night, Winn’s mom tells him she’s proud of him and says she can leave now if he wants; it’s clear he doesn’t need his mother anymore. But Winn listened to James and realizes now that he CAN have that new kind of relationship with Mary, so he asks her to stay. And I do hope we get to see her again, because she was a lot of fun.

This is the second and final time I’m going to mention Kara’s useless ex-boyfriend in this episode, and the only reason I’m going to is because he comes to talk to Kara about something his wife told him, and she stops him and says something that couldn’t have been easy, but that she should have said episodes ago: She can’t be here for him, especially not about Imra. It’s not fair to her, and frankly not fair to Imra, either. But that’s not why he’s here this time; Imra told him that they didn’t accidentally end up in this timeline. The third yet-unidentified Worldkiller, Pestilence, grows up to be the Blight that ruined the future. So they need to stop her ASAP.

Back at the karaoke bar, Winn and his mom get up on stage for their turn, because little bonds two strangers like singing poorly together in a dimly lit bar (this sounds sarcastic but I am being genuine). J’onn, after getting his father to admit what was really going on with him, comes in to talk to Alex about it, and y’all… Chyler Leigh’s FACE. She doesn’t say a single word! One second, Alex is laughing at whatever the heck is coming through those microphones, and the next she sees J’onn and knows he knows, and her face just CRUMPLES. 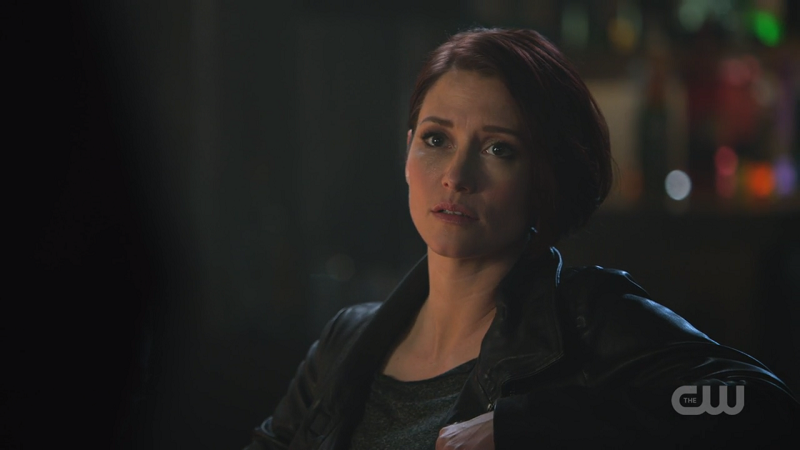 This is AN ATTACK

She gets up immediately to hug him and I was doing so well with holding all my feelings in up until this point, but I’ve been basically non-stop crying about Chyler Leigh’s general existence since her panel at ClexaCon, so I was doomed from the start.

In the final scene of the episode, Lena Luthor finally answers the phone after scaring us half to death by not only not answering for James but, most unsettlingly, not checking in with her assistant at work. But Lena Luthor is doing just fine. Also, looking just fine. 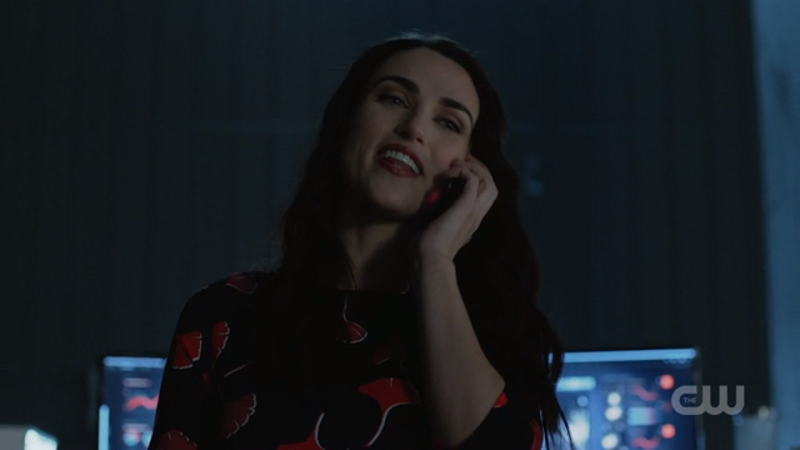 “SO sorry I know they said we had chemistry but I’m a little busy building an entire personalized hospital space for my gal pal Sam.”

She claims to be squirreled away pulling all-nighters doing L-Corp work with Sam, but in reality she seems to have built some kind of hospital bunker to help figure out what’s wrong with her friend. Because Lena Luthor doesn’t do anything halfway.