These scenes are written submissions from our staff and Autostraddle readers, illustrated by trans artist Bishakh Som. You can read more Scenes from a Gender here. 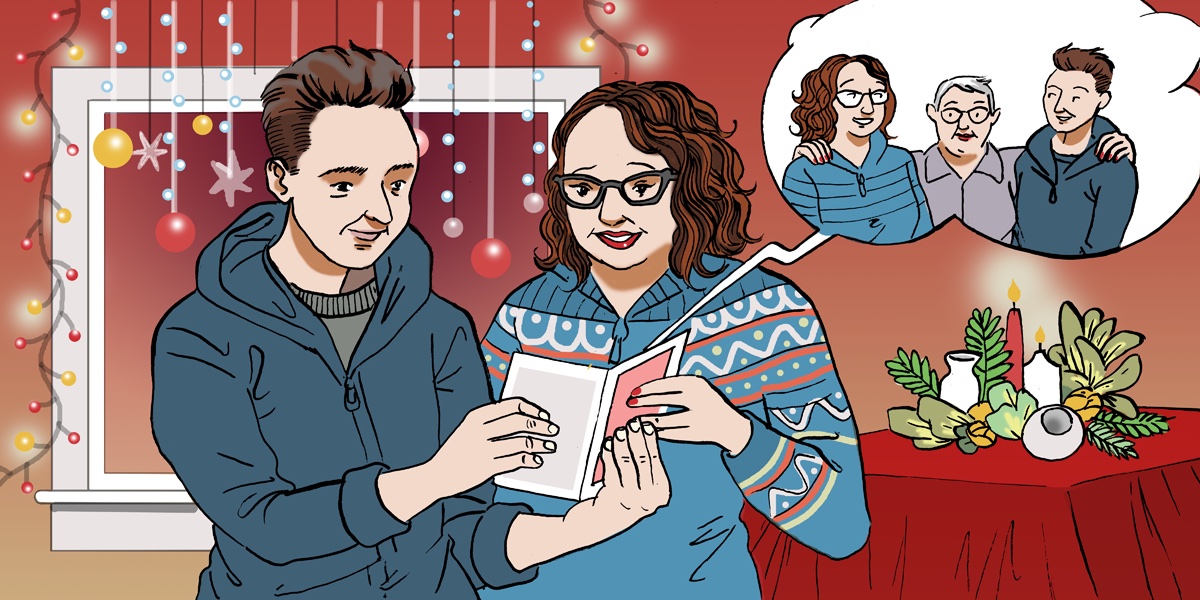 This year, I came out as nonbinary to my in-laws and it’s been a bit of a bumpy ride, particularly regarding my mother-in-law.

When I was trying to explain my change of name, my mother-in-law gave ‘helpful’ suggestions like “why not just use your initials, then you don’t have to tell people” and “people just won’t understand” and “you can’t explain it to people like [my wife’s uncle]”.

Cut to a few months later when Christmas cards started arriving in the mail. They were addressed to me, in my name. Not my deadname. The first was from my mother-in-law, the others were from all of the extended family members that she had told. 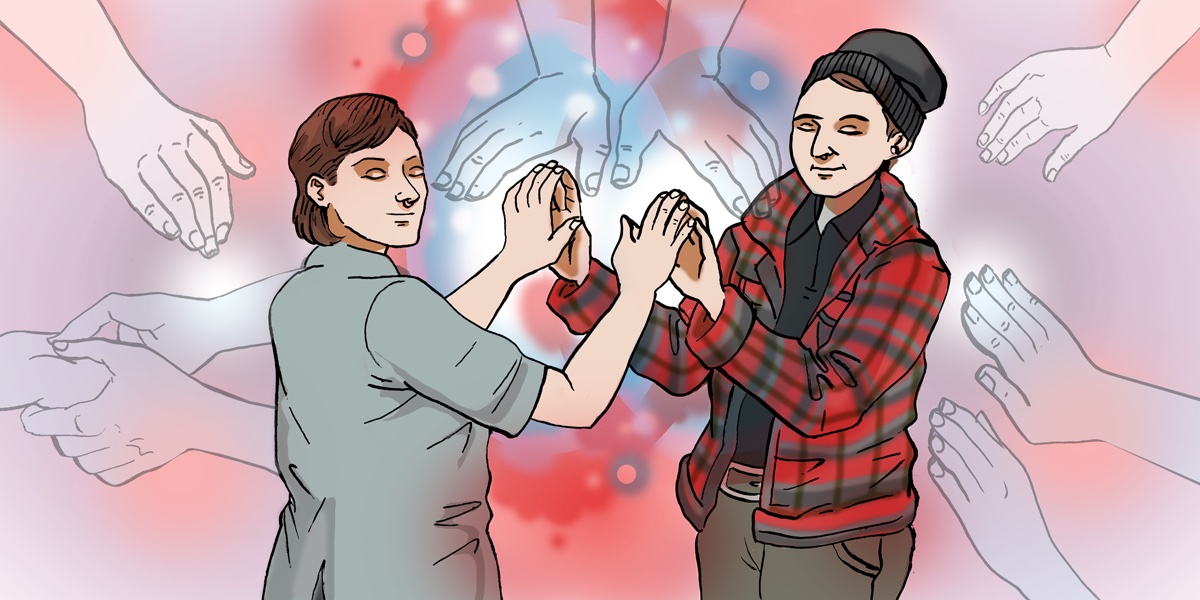 I’ve had a really interesting journey of reciprocal top surgery healing with my friend, Hands. They’re a body worker, and a couple days before my surgery in September, they gave me this energy massage in the backyard of a house they were catsitting at. They imbued a rosemary-oiled release into my old chest, and then we sat in a hot tub musing about their dreams of a flat chest.

I ended up having a pretty rough recovery period, and they helped me film a short movie about it so that other trans folks would feel more comfortable talking about the pain of this process. They ended up staying with me for three more weeks than expected — to massage me, cook for me, watch reruns of Sister, Sister with me. The next month, they moved in with a friend two houses down from mine, and we began making calls to their insurance as I slowly gained the strength to chop my own veggies and reach for the shampoo.

Now, they’ve asked me to be their primary caretaker for their top surgery in February. It feels so cosmic to be able to give that love and nurturing right back to them. All our queer friends on the street will chip in lasagnas and gentle walks, just like they did during my healing a few months ago. Building a trans community happens in both these small and profound moments of connection, and the two of us are thrilled to frolic around the Hudson Valley this spring in our tiny tops and big grins. 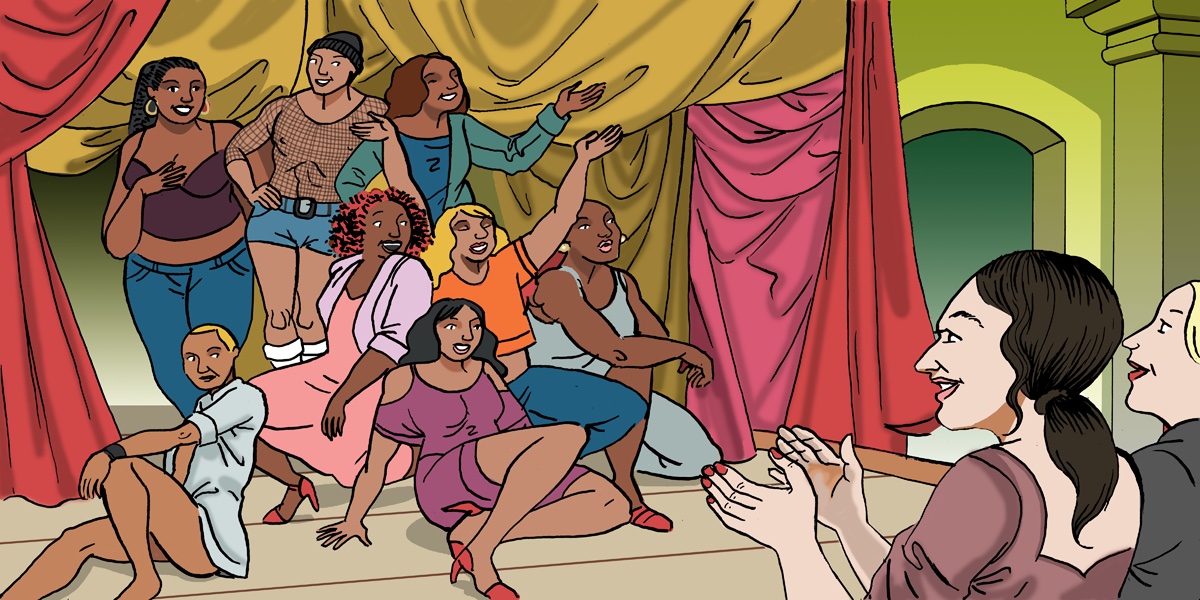 Like many people, when I was first coming out, I felt insecure about the identity I was fighting so hard to claim. I felt outside the community that I was losing so much to join. I now know there’s no right way to be trans, but when you’re raised in a cis-centric world it’s hard to feel comfortable in a trans identity, especially your own.

Around this time I went to see the trans play of the New York theatre season. It was well-reviewed and buzzed about and I didn’t relate to it at all. I spiraled. Maybe I wasn’t really trans. Maybe this was all fake. My therapist had recommended spaces for me to meet other trans women and those spaces had felt equally alienating. Why wasn’t I fitting into those spaces? Why did I bristle at the conversations of these fellow new trans girls? Why didn’t I connect with this play about trans people — about me?

A week later, my girlfriend and I went to a reading of Wig Out! by Tarell Alvin McCraney. Her friend had helped organize a weekend-long event called Interfest billed as “a free arts and ideas festival for liberationists to radically engage, boldly express, and joyously unify as a community.” I didn’t know the reading had a trans actor or several genderqueer characters or really anything about it except that McCraney co-wrote Moonlight. I didn’t go in looking for connection or validation. But I found it.

As a white trans woman, theoretically the “trans play” should’ve been more relatable than McCraney’s Black queer play about ballroom. But the messiness of the show’s approach to gender and performance and community connected with me so much more. This play, and specifically this community-focused low-budget reading of this play, helped me realize that my idea of transness had been limited by an assimilationist mindset. I’d left one box only to try and fit into another — that’s why it felt wrong.

Transness and trans community will always be about expansion to me. I want to revel in our differences — our different experiences, our different perspectives, our different desires. There’s nothing wrong with fitting a conventional trans narrative, but I learned that day there are other options. There are so many more narratives we can create. 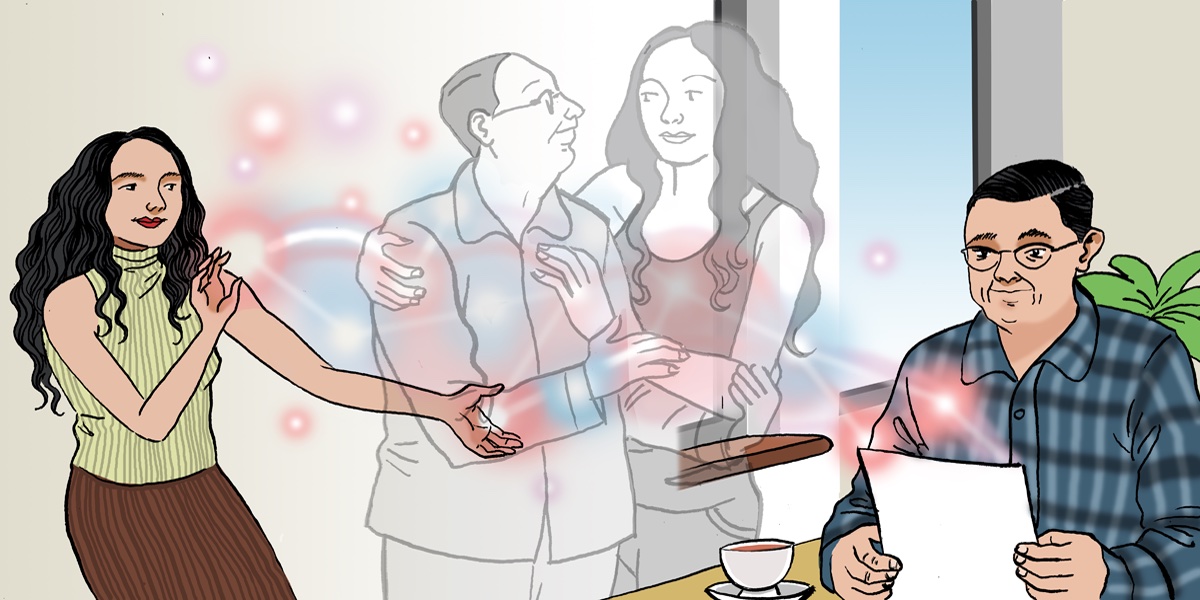 This year, the holidays were different because my father came down with COVID-19. For much of my life, my dad has been the silent protector. And in this case, he was in a state where he needed protection himself. He was bedridden for weeks.

On a day where his symptoms were particularly bad, we decided to take him to the hospital. There was a moment when the nurse wheeled him away: I had a chance to ask her for a private moment with him but I shrunk in fear. I couldn’t face him alone while he was hurting.

As he recovered at home, I realized that there was so much I wanted to say to him. How proud I was of how he did as a father. How sorry I was for all the times I was unkind. And how I wanted him to forgive himself for all the ways he is hard on himself. So I wrote him a letter almost every day. The combination of physical and emotional support was important to motivate him to get out of bed so his body could get stronger. I asked him how he felt about the letters after he had regained his health, and he told me he cried. That was enough for me to understand.

Bishakh's work has appeared in many publications, including The New Yorker. Her graphic novels Apsara Engine (from The Feminist Press) and Spellbound (from Street Noise Books) are out in 2020.