feature image via the guardian

Last Monday, March 25, about three hundred people gathered outside of the offices of the Daily Mail in Kensington, London to hold a vigil in honor of Lucy Meadows, a British school teacher who was found dead at her home about a week earlier. The vigil was held at the Daily Mail headquarters in silent protest of how the UK tabloid (and other elements of the British press) had strewn details of a small-town teacher’s personal life across national headlines – likely playing a role in her apparent suicide. Many of those same members of the press hardly flinched as they continued disrespecting Meadows, even in reporting her death.

On December 19, 2012, the story appeared in the local Accrington Observer that Lucy Meadows, who had formerly lived as a man, would be returning to her teaching duties at St. Mary Magdalen’s School after Christmas break now living as a woman. The story incorrectly gendered Meadows as male throughout and featured a scowling picture of Wayne Cowie, a parent of one Meadow’s pupils, holding a copy of a letter to parents informing them of Meadows gender transition. Mr. Cowie was quoted speaking about his son, “He has had this teacher for three years. All of a sudden [she] is going to be coming to school after Christmas as a woman.” He added, “They are too young to be dealing with that.”

I would argue that children are perfectly capable of dealing with the issue of gender transition; my experience is that beyond perhaps vague curiosity, they usually don’t care very much (if at all). This naturally leads us to a more immediate question: why would anyone, unless perhaps they are directly connected to the school, care about this story? I have difficulty seeing how this story is worthy of any news coverage, even at the local level. 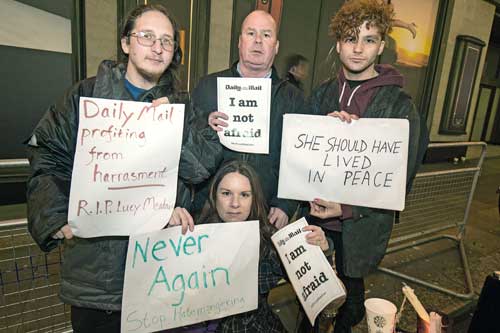 Of course, the press has every right to ask questions when it has some kind of (even broadly-defined) relation to the public interest. Usually that would mean asking questions of public figures or focusing on issues that affect a significant number of people. Lucy Meadows is not a public figure and her gender transition had a direct impact on very few people.

The manner in which the press was obviously bottom-feeding to dig up dirt in this case was a bit unreal. For example, quoting anonymous sources is usually something that is done when there is no other way to move forward on an important story. The present story has virtually no journalistic importance whatsoever, and yet the Daily Mail and others relied on such sources for comment when they piled on shortly after the local story broke. In their significantly more aggressive piece, the Daily Mail featured not only more creative comments from Mr. Cowie, but anonymous comments from other parents, including one who was quoted as saying:

“At first we thought [she] was just borrowing [her] wife’s headbands to hold [her] hair back,”

“This is totally inappropriate… Any teacher who is going to change gender should also change schools.”

They also trolled Facebook for personal photos and badgered individuals involved in the story for information. The original Daily Mail story included four photos of Meadows before her transition; three of these were taken from her wedding three years previous and two of them featured her recently-divorced wife. Apparently these pictures were lifted directly from the Facebook page of one of Meadows family members in clear breach of both Britain’s Press Complaints Commission (PCC) Code of Practice and common decency.

It’s this kind of treatment that pushes us to ask what, exactly, constitutes harassment. A day after professional diver Tom Daley and his partner suffered a disappointing loss for Britain at the 2012 London Games last year, a 17 year-old boy was arrested for sending Daley a tirade of harassing messages on twitter. To use another example, late last year Gregory Alan Elliot was arrested for months of alleged twitter harassment of a feminist activist in Toronto. He is alleged to have disrupted much of her campaigning activities online; the sheer  volume of the messages resulted in police involvement. What is it that differentiates these cases from how the press treated Lucy? While the former are unquestionably inappropriate (and illegal), the latter is considered… quality journalism?

The media’s intrusion into Meadows’s life wasn’t limited to the Internet; in December when the story broke, the press camped out both outside the school and outside her home. In an email to a friend, Meadows complained the lengths she had to take in order to avoid being photographed by the press. She used a backdoor to avoid them in front of her house, left for work early and stayed at the school until late. She also said that, “many parents have been quite annoyed with the press, too, especially those that were trying to give positive comments but were turned away,” and even more damningly, “I know the press offered parents money if they could get a picture of me.”

While these actions point to a manufactured hunger for these stories among the press corps, the media attempt to paint themselves as asking “essential” questions that we’ve all heard before: how will this affect children. This tired narrative that uses rhetorical questions of “what’s best for the children involved” as a way to deflect criticism of transphobia, homophobia or any other number of social prejudices is pushed on full volume in a second column that appeared in the Daily Mail a day after the first. This column, written by well-known tabloid trash shock jock Richard Littlejohn, expresses blasé rhetorical support for trans people and goes on to ask if “anyone stopped for a moment to think of the devastating effect all this is having on those who really matter? Children as young as seven aren’t equipped to compute this kind of information.” 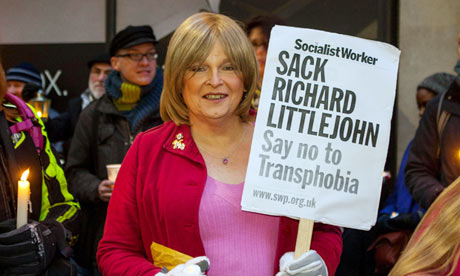 Many people have responded to Lucy’s death by demanding that Richard Littlejohn being fired (including myself), and there is even a petition to this effect out there with over 200,000 signatures. However, having some time to reflect on the situation and read over  some opinions that have questioned this demand,, I’ve decided that calling for Littlejohn to be fired might feel good but it may actually be overlooking the bigger picture: after all it was the supposed “news” press that hounded Meadows outside her school and her home. If they had never done that, Littlejohn would have never had the opportunity to pile on top of it all in his commentary piece.

The harder truth is that this thing started at the local news level, with a story by Stuart Pike in the Accrington Observer and spread outwards from there. The problem is with the media itself, not one figurehead who happens to pretty openly despise lots of vulnerable people. And it’s very clear that the British media itself has refined this type of public abuse of trans people to almost the level of a twisted art form (see here for details on how the British press and others actually open up trans children’s lives for public abuse; also see here).

It’s not necessarily clear what role her ordeal with the press played in Lucy’s decision to end her life; perhaps some clues to her state of mind at that time may emerge in the future, or perhaps they will not. However, it is clear that these types of stories focusing on the private details of trans people’s lives and bodies serve absolutely no public interest. They only serve to provide trash tabloids, and even supposedly reputable newspapers, massive page hits and advertising revenue. The hounding of Lucy Meadows and other trans people by the press should be viewed for what it is: self-interest and ruthless sensationalism; in short, it is journalistic sadism.

In looking back at the unraveling of the story, we note that the Headteacher of the school stated that Meadows had the full support of the school staff. Meadows was also quoted as saying that her decision had been a difficult one to make; she further requested that her privacy be respected. If only that simple, reasonable request could have been respected from the start.

About the author: Savannah is a queer trans woman and physicist originally from the great state of Carolina (that alone should tell you which one).  She also writes on trans feminism and other social justice issues on her blog leftytgirl, preferably while listening to metal.  Savannah presently lives in Tokyo where her principle hobbies include singing at karaoke clubs and getting lost on the subway.

Savannah has written 1 article for us.