Despite growing indications that voters are turned off by anti-gay rhetoric rather than drawn to it, the remaining GOP candidates have by and large remained committed to reminding their constituents at every opportunity just how much they don’t want us to have equal rights. Although an observer might notice that Rick Perry’s “Strong” ad didn’t win anyone over, not even anti-gay groups like the American Family Association, Republican candidates just can’t stop talking about how much they love to hate us. As the field of candidates narrows, Michele Bachmann is insisting to everyone who will listen that she’s got the most anti-gay bang for your voting buck. And while it wasn’t intentional on Ron Paul’s part, he’ll also now be associated with some pretty vitriolic anti-gay beliefs after the revelation of the New Republic newsletters from the nineties. Rick Perry hasn’t renounced the homophobic views he hoped would improve his polls in Iowa (although he was also revealed to be pretty clueless about Lawrence v. Texas, the landmark gay rights case in the Supreme Court that came from Perry’s own state). 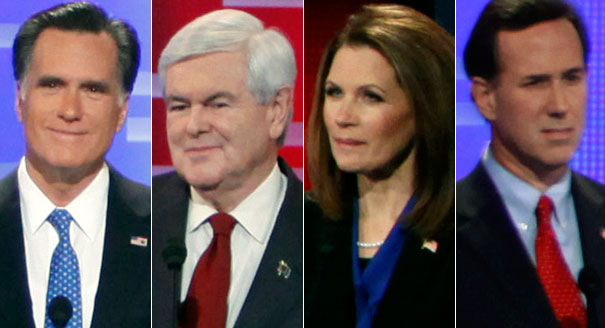 So, we know how the Republican party is playing this one. But how are the Democrats dealing with gay issues and gay voters? Well, as the NYT notes, the White House has made some strong statements lately about equal rights for gays, but they haven’t come from President Obama. For instance, when the United States made a historic statement that on a global scale, “gay rights are human rights,” it came from Secretary of State Hillary Clinton, not our president. The NYT speculates that, while the Republican candidates are actively attacking the queer community, Obama is “reluctant in an election year to be drawn into a culture-war issue.” Even though his public statements — like “Every single American — gay, straight, lesbian, bisexual, transgender — every single American deserves to be treated equally before the law” — would seem to suggest that he believes in marriage equality personally, he’s shied away from saying so in those words.

But not everyone thinks that Obama’s administration will go gentle into that good night and remain silent on the issue of marriage equality before what could potentially be his last term as President. There are those, like Richard Socarides, a former political strategist on gay issues for Bill Clinton, who think that we could see Obama taking a public stance for marriage equality.

“It works for the White House on several levels, particularly in an election year,” said Richard Socarides, a Democratic political strategist who advised former President Bill Clinton on gay-rights issues. “Gay voters will be more enthusiastic for him than we would have been a year ago…” “My core argument is that you’ve got a lot to win and not a lot to lose,” said Evan Wolfson, the founder of Freedom to Marry, a group that advocates for marriage rights. “It would remove a constant irritating false note, and it would allow him to tap into an unmitigated good stream of energy.”

So far this year the White House really does seem to have committed on some level to doing what’s right, and standing by the international community of marginalized gay and lesbian people. But what if it’s not only about doing the right thing? One of the victories the gay community has won this year is a new majority of hearts and minds — for the first time, more than half of America supports same-sex marriage, and the majority of Republicans wish their party would give it up as a central issue. What if Obama making a statement in support of gay marriage wasn’t just an issue of working for equality even though it’s a political risk, but was something that could actually help him keep his job? If campaigning against gay people is hurting GOP candidates, could speaking up for them actually help the Democrats? If Wolfson is right, then Obama could actually win key groups for 2012 by supporting marriage equality, whereas Rick Perry hasn’t managed to win anti-gay organizations even by speaking out against it. In 2008, queer people all over America felt their hearts twist in their chest as Barack Obama and Prop 8 took their place in America’s history at the same moment. Maybe this time, it won’t be a case of what we end up losing as the country marches forward, but a case of our community’s progress and the progress of our nation finally happening together.