This episode of Pose was a heavy one, but filled with such an amazing cast and writing that, while complex, is intentionally engaging with truth. It begins with a few scenes that set the narrative for the rest of the episode; Pray Tell wakes up to night sweats several nights in a row, which sees him at a hospital with Blanca, and Nurse Jackie. The nurse tells him that he has swollen lymph nodes, and the doctor would provide more information when he arrives. I felt dread building in me with each part of the opening scenes. The feeling wasn’t misplaced. Not long after Nurse Jackie makes her pronouncement, the doctor in question shows up to deliver news.

Pray has cancer, and his T-cells are low enough that treating him isn’t safe. Chemo isn’t an option either, because it would kill him. I don’t know what the right way to tell someone they’re going to die is, but I think that doctor could have summoned a shred more decency, respect, care, empathy- anything really. He doesn’t. He tells Pray that he has, at most, six month to live with — seemingly — as little care as he can muster. In the next scene, Nurse Jackie is ranting about the doctor’s incompetence, and getting a second opinion, while Blanca checks in on Pray who is, understandably, checked out. Blanca’s questions bring him back to reality, and he tries to assure them not to worry about him. He’s always known his time is limited, and he’s decided that he’s going to spend the rest of it loving the people around him, making amends, and forgiving people. 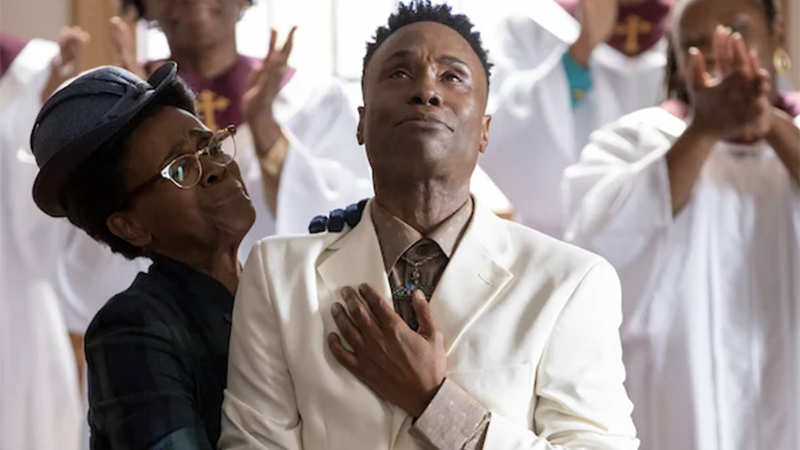 I have a lot of complex feelings about Pray dying. My immediate response was anger, and disbelief. Not because the potential of Pray dying never crossed my mind, but because this seemed so cruel, and unnecessary. Pray was on a healing journey; in fact, if the desire behind this was to show more of Pray’s backstory, like they’ve been doing with other characters this season, then this would have been a perfectly reasonable storyline to have in tandem with his discovery journey. To have Pray get the opportunity and will to heal, only to cut that time short and ground it in death seems wrong to me.

Still, isn’t that what happened? Queer, primarily Black and Brown and poor and houseless Americans died and the government exacerbated it. Death didn’t come easy or timely. It was cruel, and punishing and unfair. Isn’t that what’s happening? To live and love and be queer, even now globally is met with violence. That’s not fair either; that circumstance of birth or location can determine whether a queer person lives or dies, that our lives are discounted time and time again. I’m wrestling with holding a desire to respect and honor the stories of love, resilience, sacrifice and unfair, unjust, cruel death that is the truth of queer history and simultaneously, frustration at media that seems to prioritize trauma narratives and spectacles of pain over world making and future dreaming. Additionally, I can’t fail to mention, characters that receive death as their end narrative are primarily darker, and the characters whose futures seem to be opening up to possibility are primarily lighter. In short, my heart hurts.

Complex is a good word to describe this episode, and perhaps this season so far. Pray returns home, and the rest of the episode follows him on a journey of truth, hurt, reconciliation and healing for more than him. When he arrives home, Pray begins the first of a series of flashbacks; him as a teenager, jumping rope in front of his house with his signature tilted hat. He’s drawn out of his reverie by his mother calling his government name — Prayerful — and welcoming him home. His mother, Charlene, lets him know she’s making catfish for lunch and his aunts — Latrice and Jada — will be over. Pray Tell takes the moment to share with his family that he has AIDS, and he’s dying. Their responses are painful. By the time he gets to explaining that he’s been sick for six years, Charlene gets up to leave, and his aunt Latrice chimes in that she knew this would happen. While they turn for him, Pray laces his truth with apology, because somehow, even though he’s dying not just because of a disease, but because of the ways community and family harmed and failed him repeatedly, somehow he’s the one who’s sorry. Latrice is the only one to show up for Pray; she tells Jada to hush, and assures Pray she’ll be there until the end. Jada says the same thing but it’s less convincing. 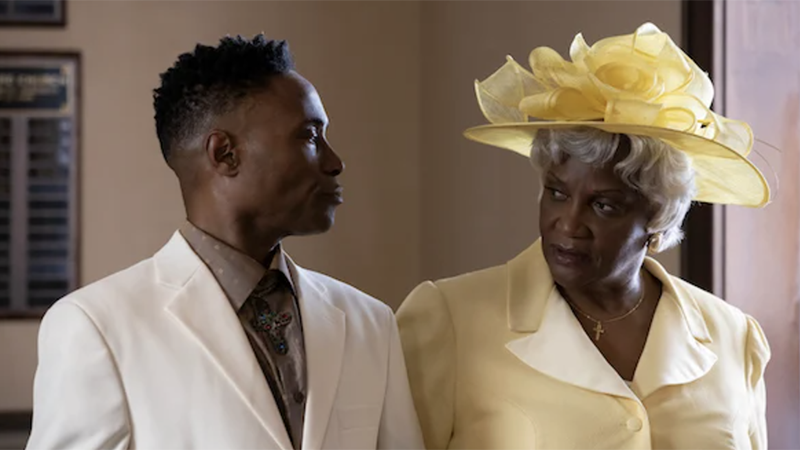 She also tells Pray that she’s off to church, and he’ll like the new pastor, Vernon Jackson. Pray is dubious about Vernon being a pastor because, as we soon find out when Pray heads to Church, he’s gay and he and Pray were in love when they were younger. In the present, he’s an ordained pastor, married man — to Pray’s High School best friend — and father of three. Vernon tries to convince Pray that he’s happy, straight and at peace, but everything he’s saying is kinda’ sus, because Pray never asked, and he’s over-explaining. Still, he projects enough internalised homophobia at Pray that he confronts Vernon. Pray tells him that the institution he serves upholds ideals that asks them to step away from young, scared queer kids who need community. Seeking that they flock to the cities where their isolation, and persecution consistently puts them at risk. Somehow Pray’s confrontation ends with Vernon inviting him to dinner. Pray’s response is that it’s a terrible idea, but he still goes.

Before dinner, Pray goes home and tries to talk to Charlene. Their conversation goes from her talking about her worry for Pray, to her belief that Pray being gay means his soul is damned. Pray stops her there and says she doesn’t care about his soul, and he feels that way because she let her husband sexually abuse him until he was old enough to fight him off, because of her fear of losing face with the church. She justifies this somehow, and calls her husband, Ernest, a good man and asks Pray to “let the past lie”. Pray’s response, short, emotionless “okay’s” to anything she says after that, is pretty much all that can be said because, genuinely, what the fuck? I know that this is a common response, but it’s not okay. The next scene is a flashback to Pray and Vernon’s teenage years in the church choir. Pray sings beautifully and he and Vernon stay after to clean up and make out. Unfortunately, they’re caught by a younger Latrice at the end of the flashback.

At dinner, Vernon and Ebony’s children launch into a Bible verse recital that’s very reminiscent of my childhood. It’s cute, but also painful because I know what that feels like to feel grounded in that love, and what it feels like to not have it, or to be told you aren’t deserving of it. Halfway through dinner, Vernon takes a call to see off a “Mrs. Williams” into the afterlife, and Ebony takes Pray into her confidence. She asks him for guidance on “how to pleasure” Vernon. Pray declines, and reminds her that her husband is Gay. She can’t do anything to change that. When Vernon comes back, he asks Pray on a walk, where he starts to reminisce about their past relationship. Eventually, he tells Pray that he misses and still loves him. Simultaneously, Pray calls on Jesus to prevent Vernon — and himself — from doing what he thinks is a bad idea. That doesn’t really happen. They kiss and Vernon pledges to leave everything and be there for Pray in the end, like he was in the beginning. 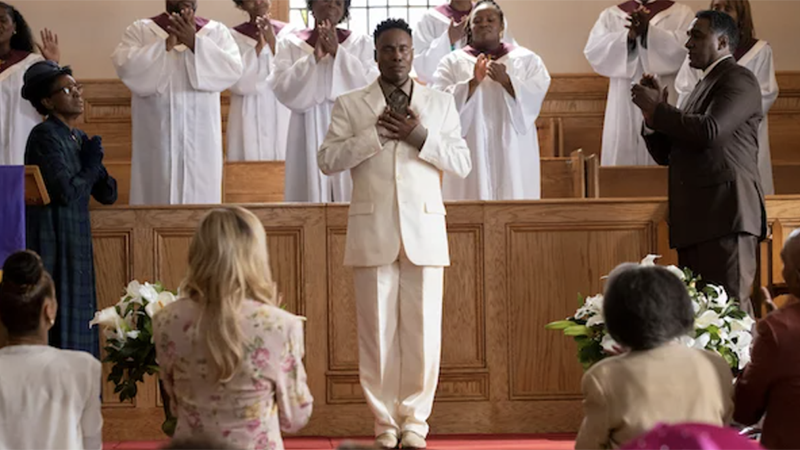 Pray tells him what time his bus is leaving back to New York, and he says he’ll show up. Pray Tell is having a hell of a time. He goes home to have yet another conversation with Charlene, but this time, she acknowledges that she messed up. Sometimes accountability can be incredibly scary, not just because of other people, but because of how hard it is to forgive yourself, to love yourself and hold the full weight of what you’ve done. How do we do that? I think it helps to remember what accountability does, it brings truth, and love always finds a way in truth. Charlene asks him about his God, and Pray talks of kindness and forgiveness. She invites him to church and he reluctantly agrees.

At church, Latrice introduces Pray and invites him to sing. Pray acquiesces and launches into an amazing worship session, while Pastor Vernon seems to be having some sort of spiritual, or romantic awakening. I’m unsure, but he grabs on to Prays hand while he sings and lets go hesitantly.

After church, Jada invites Pray to eat, and apologizes for not showing up for him when he was a child. She knew he was being abused and she did nothing. To hold herself accountable, and out of love for Pray, she wants to make sure Pray gets to be buried and remembered how he wants so she offers to have power of attorney over his choices, because even though his ball family is family, their lack of blood relation would limit their legal ability to make choices. They launch into one of the frankest conversations I’ve seen about death on TV. Pray says he wants to die peacefully, at home. He wants to be cremated, and he wants his ashes in small lockets that should be given to his closest friends and family, save Elektra. His meal with Jada wraps up Pray’s visit home, and he waits at the bus stop for Vernon, but he never shows up. Pray returns to his other family, and the episode closes, as it usually does, on grace, and a meal.

After the episode, Billy Porter spoke to The Hollywood Reporter about being HIV-positive for 14 years.