The pop archaeology world is astir right now thanks to the discovery that the Two Maidens of Pompeii, bodies found curled around each other as a volcanic eruption buried them alive, are actually men. Or at least, possessed of Y chromosomes. This, coupled with the fact that they’re unrelated to each other, has led to the media declaring them gay lovers with a self congratulatory smugness at their own liberality. 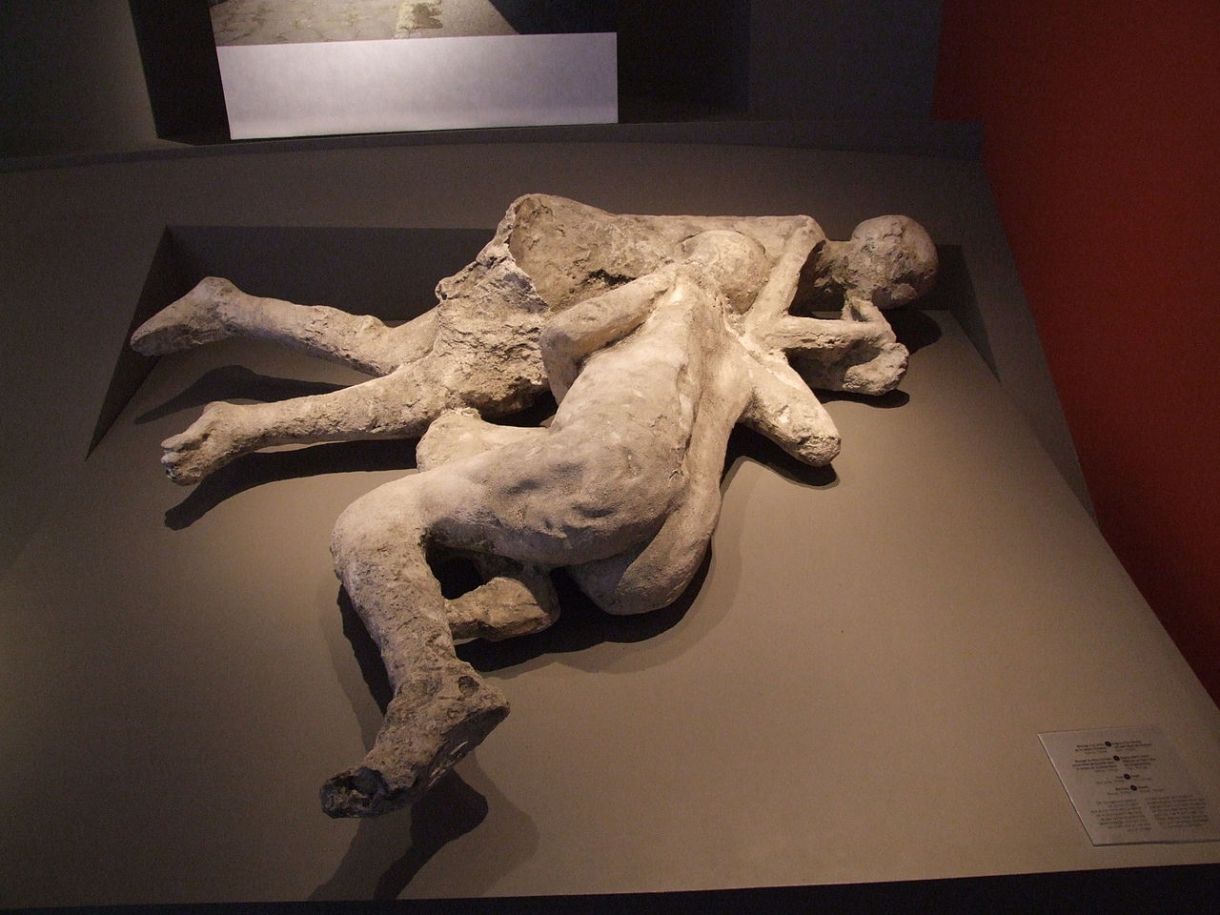 There’s an awful lot to unpack here. Let’s start with the assumption that chromosomes dictate gender, or even assigned sex. Genetic testing is in some ways an even less accurate indicator of gender identity than attempting to sex a skeleton because it completely ignores the existence of a whole host of intersex persons. More importantly, neither method gives us insight into the person’s gender identity or the way that their society in their time understood them. The balance of probability tells us that these people were probably cis men, but as with so much of archaeology we cannot say for certain, and to do so is damaging in the assumptions it makes and reinforces about the biology and identity.

That said, even if they were men, why would two people clinging together in the midst of an apocalyptic nightmare mean they were romantically involved?

More than one archaeologist has noted that its interesting that when the maidens were assumed to be, well, maidens, no one suggested they were lovers. Following that line of thought, it’s not just interesting but downright illuminating that they were assumed to be women in the first place. There’s nothing to indicate gender about the bodies; they’re two amorphous grey figures with a roughly human form. What suggests first femininity and then male queerness to the viewer is a conception of masculinity that codes platonic touch and the expression of non-aggressive emotion as a deviation from it — their vulnerability, physical closeness and obvious suffering exclude them from normative masculinity and their maleness needs to be explained through reference to sexuality. Nobody thought of lesbians when they believed the maidens to be women, not only because softness and touch are the provinces of women, but because women aren’t imagined as having a sexuality independent of men.

This version of masculinity isn’t even that old, and it certainly isn’t Roman. The idea that men don’t engage in platonic touch is a result of the homosexual panics of the twentieth century that sexualised all physical contact between men and reactively redefined normative masculinity to shun it. Prior to that men in the West engaged in the same kinds of platonic intimacy that can be seen around the world, hand holding, hugging and even bed sharing without any sexual connotations. Similarly, while “uncontrolled emotions” have always been coded feminine, the expression of strong but nonviolent emotions has been an essential part of many masculinities — including that of ancient Rome. All of this is to say that Roman men would have been fine with cuddling in the face of certain, fiery death, and it would in no way have been at odds with their identities as strong, manly men.

Not that Roman masculinity was any less toxic than the masculinity of today. While a Roman man could weep publicly in his grief and have his masculinity affirmed for it, the foundation stone of Roman gender identity was penetration — who did it, and who had it done to them. Roman sexuality wasn’t divided into the homo-hetero binary of today (with its closet full of invisible bisexuals), instead it was divided along the lines of penetrator and penetrated or, broken down to the fundamentals, power vs powerlessness. Like the ancient Greek culture on steroids Roman relationships could not be conducted between equals, at least not if they wanted a veneer of respectability, but where age and gender were the relevant axis in Greece, in Rome it was gender and citizen status. The acceptable targets for Roman male lust were women and slaves of any gender, while for a citizen male being penetrated was the highest shame. Interestingly, cunnilingus was considered a form of penetration, and for a man to perform it on a woman was both more and less shameful than for him to be penetrated by another man. It also brought shame onto the woman; like sex between women, it involved her stepping outside of her “natural” role as a submissive sheath to a man’s sword. To be clear, it’s not that same-gender peer relationships didn’t happen, it’s just that people had to be circumspect about them. Despite all the differences, there are some similarities to modern conservative beliefs about sex and gender.

Repugnant as Roman sexual standards were it’s still important to acknowledge them in any article that discusses a Roman’s sexuality, a statement so obvious that it was nearly painful to type. But most of the articles about the Maidens’ genetic makeup don’t even touch on it, allowing that silence to affirm for the reader that the Roman’s beliefs about sexuality and gender were just like ours. Like the confident statement that a DNA test can tell us the gender of a skeleton, this approach reinforces the idea that sexuality and gender are constants across human societies, that there is something biological and intrinsic to them rather than their being constructs specific to each culture and time. It lets us pretend that homophobia and patriarchy are natural instead of culturally specific phenomenons that we’ve only recently, in our benevolence, started to overturn.

We have no reason to think that the Two Maidens were lovers. Equally, we can’t say that they weren’t because we just don’t have the evidence either way. The assumption that they must have been lovers based only on the DNA and their physical proximity just serves to highlight the bizarre prejudices of Western culture and the way that we deny men and women access to the full range of human experiences.