We are scary. Whether we’re more terrifying to ourselves or each other is an open question, but it’s obvious to anyone who’s been going to the movies lately that we are telling a lot of scary stories about the future of humanity. Zombie stories are by nature dystopian. Zombies signify failure — of political will and social cohesion, of technology and medicine, of the human body and soul. These are all topics that are being battled over right now, among people who care about all three worlds that this series occupies: science fiction, feminism, and bicycling. Questions permeate news and Internet discussions like: Who has power and who ought to? What forms of social or personal control are desirable and which are anathema? What is the line between life and death, humanity and inhumanity? When it comes down to it, who will survive?

Obviously that’s quite a lot to explore in 159 pages, but the collection does a superlative job. The 13 short stories that follow are the feminist bicycle science fiction stories I’ve been waiting for my entire life, without even knowing it. This is not an exaggeration. They’re just really, really good. 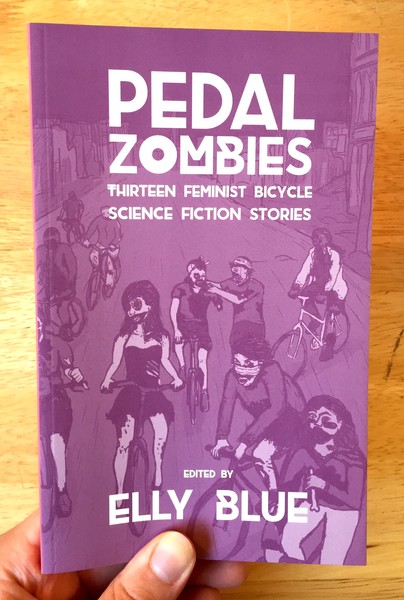 The stories collected in Pedal Zombies do not share the same world, exactly. In one story, humans turn to zombies via exposure to an HIV-reminiscent virus known as ZH81. In another, automated cars are the ones turning into zombies after being “bitten” by other cars in minor traffic accidents. Still, there’s a common worldview tying these imagined worlds together, and it’s one I expect many readers of Autostraddle will feel intimately familiar with. At multiple points in my reading, I found myself drawing hearts in the margins or laughing out loud with sheer delight. The feminism reflected in these pages is my feminism: intelligent, inclusive, and women-centered. There’s a heavy dose of lesbian feminist cultural influence throughout, and many stories contain queer lady characters and same-sex relationships. As I said: it’s delightful. 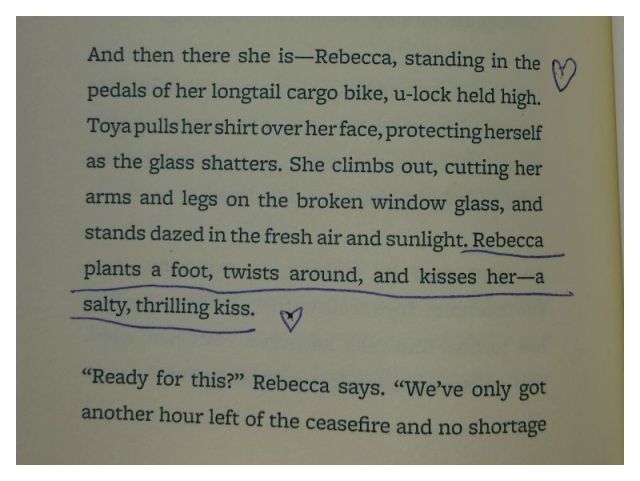 From “Night of the Living Cars” by Elly Blue.

In my favorite story — “Why I Ride: A Personal Posthumous Essay” by Gretchin Lair — the essayist writes succinctly and relatably about a past relationship in which she tried to be “the kind of girl he wanted, the kind who wouldn’t walk alone at night, the kind who would make lunches for him, the kind who would only ever ride a bike on safe river paths.” It didn’t work, of course, and now she goes out on her own and rides as much as she wants, wherever she wants. “There’s only room on a bike for me and my own issues,” she writes. Word.

In another favorite — “The Breeders” by Emily June Street — a woman comes to terms with her menarche in an apocalyptic world where powerful forces seek to deny period-havers of reproductive choice. It sounds thematically heavy, and it kind of is; but it’s also humorous and optimistic. It also references Margaret Atwood in passing, which is like, a surefire way into my heart.