I’m sorry, y’all. I think Piper and Alex have sexy-as-hell chemistry, same as you, but they’re wearing on me this season. I think the thing is that, like, obviously none of these women want to be here, right, and most of them don’t think they deserve to be here (and most of them are probably right; the prison system is fucked), but Piper and Alex think they’re too good to be here. There’s this superiority and exclusivity to the way they act, like yeah they sold drugs, but they’re pretty white women who sold drugs, so it’s extra unfair that they have to go to jail for it, and I think that’s just waaaaaay too close to the way the world actually works for me to be even a little bit comfortable with it. They look real good when they’re making out, though! I do agree with you about that! 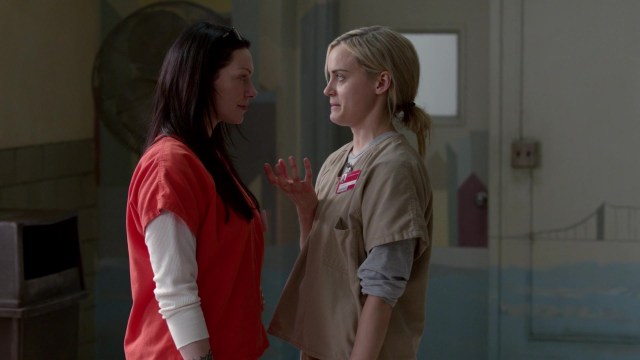 Here are some new cantaloupes. 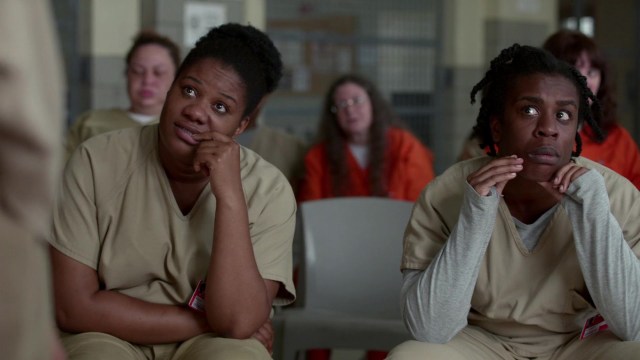 Is that code for something gay?

Despite Suzanne’s excellent suggestion that Piper and Alex’s scene should take place on the moon and/or in a grocery store where a customer is returning the moon, they end up in the grocery store with a bruised piece of fruit. Alex is mad the fruit is rotten. Piper thinks it’s cool that the fruit is rotten as long as it’s pesticide-free. Alex doesn’t give a free range organic fuck about the origin of the fruit, just that it’s inedible. Piper sold the fruit to Alex because she wanted to have some power over her. Alex ate the fruit because it’s delicious, regardless of the power play. Piper kept selling the fruit so Alex would come back to the store. Alex will always come back to the store because she has a toxic addiction to Piper’s fruit. The whole time they’re saying “grocery store” and “fruit” and “customer,” Suzanne is doing air quotes around it. She is a magician.

Pennsatucky finds Nicky staring out the window at the inmates who are getting early release and tells her the best plan is not to care if you get out. If you do, it’s a nice surprise. But if you don’t, you didn’t expect it anyway, and so it’s not a disappointment. She calls it “a double-reverse-jinx strategy,” which is how my girlfriend watches sports. (It doesn’t work.) 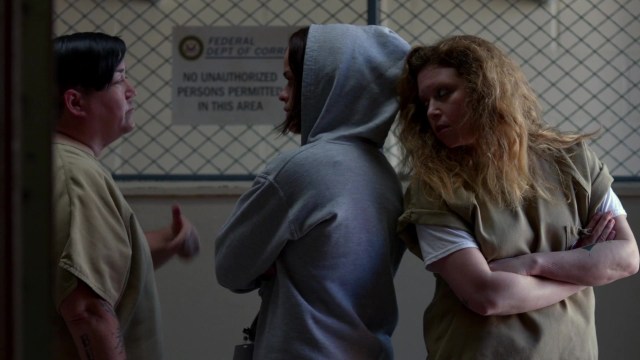 Big Boo menaces her way in between Pennsatucky and Nicky to ask about the missing drugs and Nicky weaves a yarn about how it wasn’t her and Boo can’t prove it and deal with it and her friends can trust her, okay, and then we flashback to this time she was hanging out with her drug buddies after she’d been arrested for the taxi-stealing thing, and to get some money to score some more heroin, they decided to break into one of their friends’ houses and steal her rare books and pawn them. Which, apparently, is the thing that landed her in Litchfield finally.

While Norma leads a group of silent worshipers in prayer, Angie and Leanne come bebopping by, tripping balls, and Nicky realizes they’ve found her stash. She runs to Luscheck to dime them out and get her drugs back. He does, and when he brings the bags of smack back to electrical, Nicky gets so Gollum with them that Luscheck has to pry them out of her hands while she screeches about nasty little tricksy hobbitses. Her Precious. HER PRECIOUS. Nicky knows she’s fucked up about the heroin, and she knows if Luscheck doesn’t get it out of there, it’s going to actually kill her. She says she’s a master of self-destruction, and then in the next breath she says he’s just got to trust her because it will be different this time. 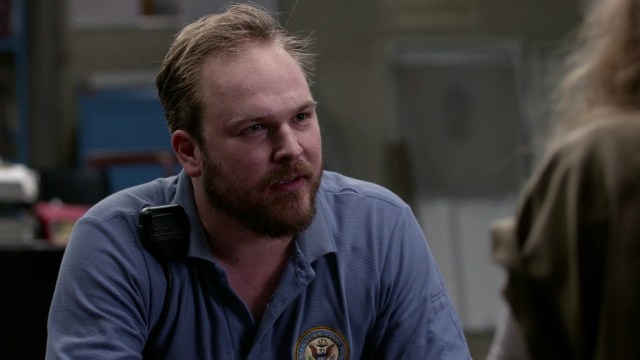 Thor is a man! 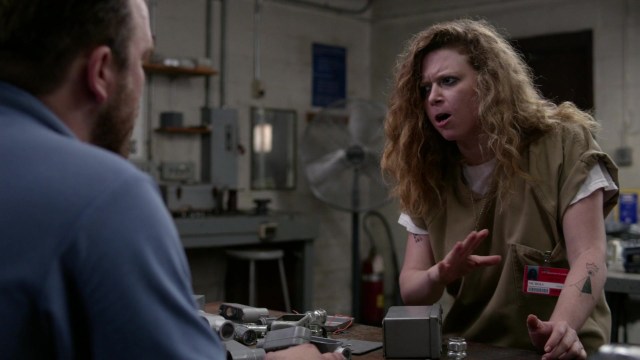 Well, Thor as a woman has sold about a zillion more comic books, so you can suck my Norse thunder hammer!

Red’s mediation with Healy and his wife is pretty awful because Healy and his wife are pretty awful. Red finally snaps about, like, what did Katya think she was getting into when some random dude off the internet offered to pay for her to come to the U.S. and then marry her for citizenship. Like, that’s not some kind of Disney Prince situation, okay? She’s lucky it was Healy and not Pornstache. (Sophie’s Choice of Immeasurable Horrors.) But then Red takes it one step further and says Healy is a handsome, hard-working good guy and Katya is lucky to have him. Which is ridiculous. That Red said it out loud, yes. But also, that she might actually believe it.

No! No, I refuse that reality. In the name of Norma, I command the evil spirits to depart from you, Red! Return her to her right mind, you devils, you hellworms! 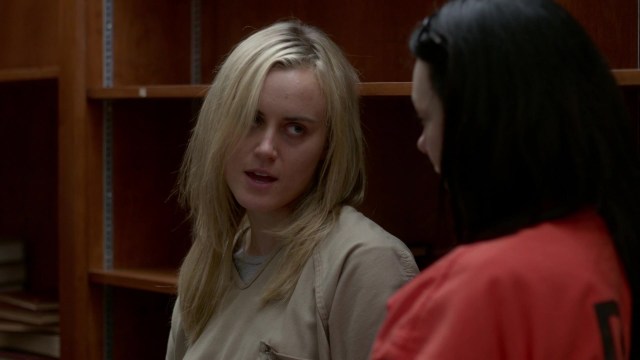 Oh gross, do you love me? 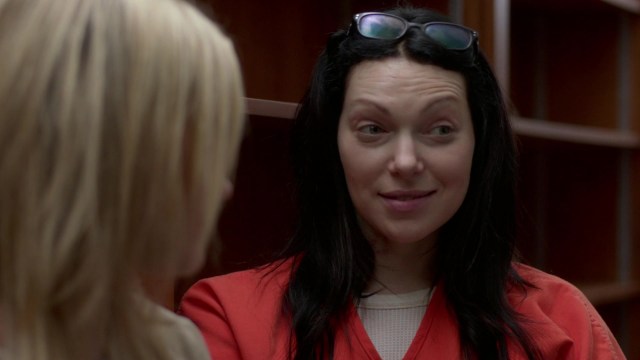 Alex and Piper return to the empty library for another hate-fuck but they can’t work up the anger because they got tricked into being empathetic for a nanosecond. Well, now what are they going to do? No books and no sex? What a bleak world! What they need is someone to write a book about sex for them, inside Litchfield. But who could be such a hero? 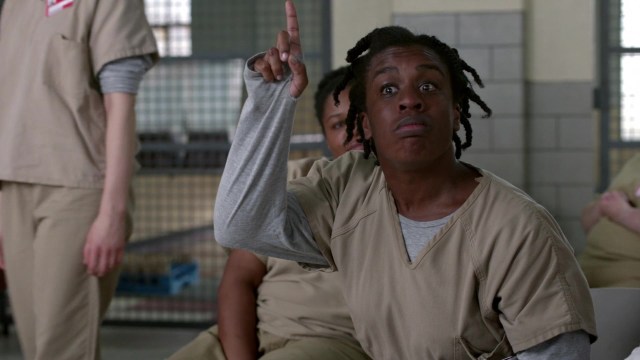 Daya hears a couple of women in the bathroom talking about how the cute, good-smelling guard is back, so she rushes out thinking it’s Bennett. Her face is so sad when it is so not Bennett.

Caputo is having a day. The guards have heard the word that Litchfield is probably closing down, and they’re guilting him about it, and so he calls up his old frenemy Natalie Figueroa and asks for her help, which is dumb as shit because she’s got a vendetta against him and all kinds of power now because her gay husband is the governor or mayor or something. Some kind of political guy. She does give him a hot tip about getting an independent firm to take over Litchfield, though, because allowing unchecked capitalism to govern a group of powerless people, that always works out. The point is, Caputo is angry and annoyed and when he hears Leanne and Angie talking about Luscheck lifting their drugs, he marches to electrical to conduct a search. 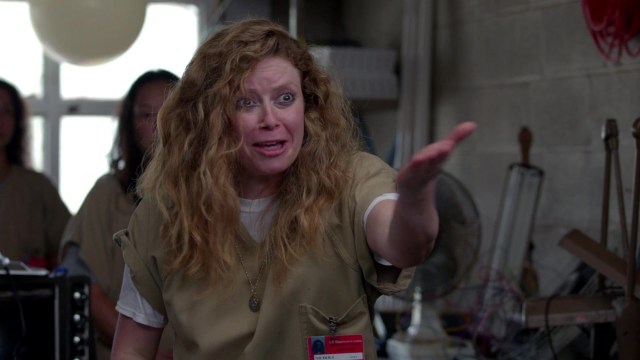 He hasn’t even read any of the female Thor books! He doesn’t get to have an opinion about it!

He does find one small bag of heroin, taped underneath Luscheck’s desk. Luscheck says it’s Nicky’s, and Caputo immediately believes him. Or, well, who knows if Caputo actually believes him. It doesn’t matter. It’s the bro code, the law enforcement code, the power code. It’s one of those things or all of those things. Caputo grabs up Nicky, no questions asked, and hauls her off to max.

Red and Morello find her being pulled down the hallway and tell her how much they love her.

On the way to max, Nicky remembers the day her mom stopped bailing her out. She was in her lawyer’s office on the hundredth floor of some high-powered law firm and her mom pulled the plug on the money, the support, all of it. Nicky said everything an addict does, blamed everyone but herself. Her mom said Nicky’s desire to self-destruct was unquenchable, and Nicky knew she was right. 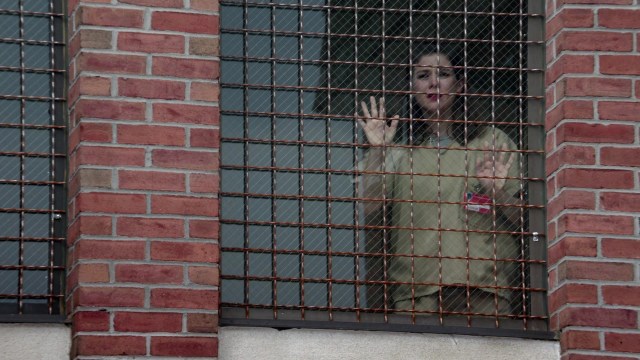 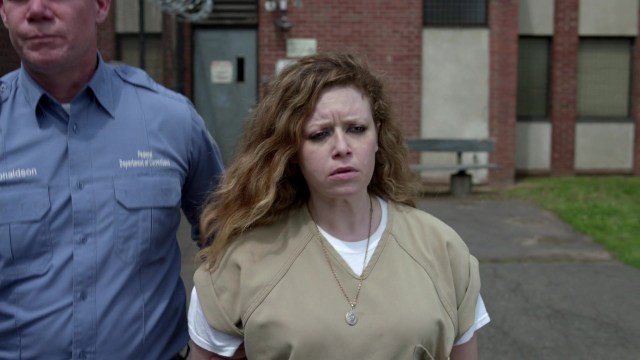 I think what’s most poignant about Nicky’s flashbacks is — unlike so many of the other characters who had different options and didn’t take them, or were truly victims of a severely broken system (like if Flaca was a white dude, she’d never be in prison for basically selling little squares of notebook paper to her high school classmates) — Nicky kind of knows that if she had it to do all over again, she’d fuck it up the same way. Driving down the hill, Pennsatucky says the bright side is, it can’t get worse. Nicky disagrees; she’s says she’s very resourceful. The embodiment of a Shakespearean tragedy. A Bloodhound for Oblivion. Chlamydia dell’Arte!