HI YES HELLO, you may notice that I am also not your usual OITNB recap enthusiast Kate Severance. Although I can see how somebody might get confused. 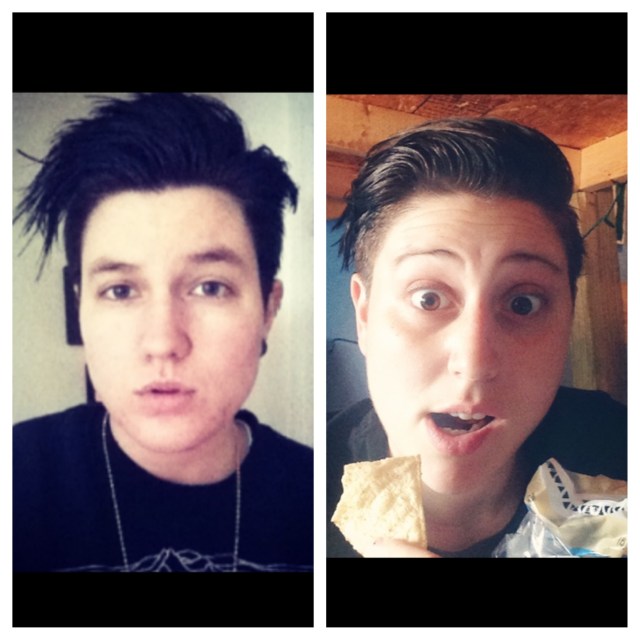 For reference, I am the goofier looking one about to cry into those tortilla chips.

Anyway, I cried about a hundred times watching seasons one and two of Orange is The New Black. Then I braved my feelings and even updated my Netflix Silverlight plug-in in order to go back and recap episode 207 because that is how much I love you. HERE GOES NOTHING.

Wait, first we have to wait for that Regina Spektor song to finish playing over the opening credits. I don’t want to skip it because I might overshoot and miss something important. We just need to wait and it will end soon.

Nope. Still playing. Listen, I love Regina Spektor. It’s nothing against the actual song itself, I just need it to end twenty seconds sooner than it does in this context. Can we talk to somebody about that? Okay, here we go.

Vee has launched a selling-cigarettes-to-inmates-for-stamps business, so episode 207 opens in the custodial closet with Suzanne, Watson, Taystee and Cindy rolling tobacco and discussing profit margins. It is not a collaborative workplace. Vee calls the shots and talks down to everybody because Vee is terrible (I know, Lorrainne Toussaint is the opposite of terrible and that can feel confusing — evidently it’s this thing called acting). 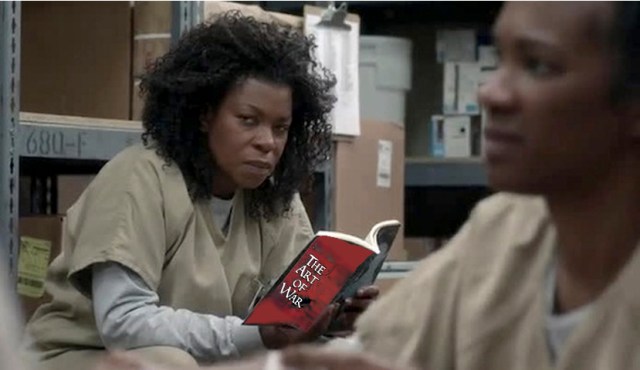 Just catching up on some light reading

Suzanne distracts a CO by talking about germs (a method of diversion I will utilize henceforth). Cindy questions the fact that Vee stands to make 90% of all the profits from the cigarette racket. Vee contends that it is because she will be assuming all of the risk. Spoiler alert: We know that this is bullshit because Vee’s prison cigarette trade is obviously a thinly veiled microcosm of her drug trafficking hierarchy in the non-prison world. We also know that this is bullshit because Vee is a brilliant self-serving sociopath who would never willingly assume risk for another person.

Cindy’s like “nope, pretty sure we’re assuming risk tho” so then Vee’s like “ummmm okay, well, so, I’m helping you earn respect then.” After which she immediately tells Suzanne that she’s not allowed to sell any cigarettes. 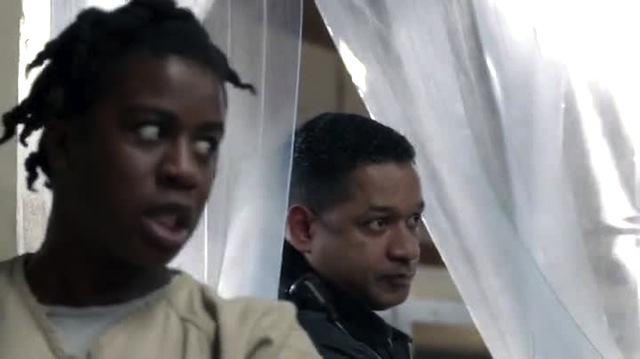 Suzanne solemnly relinquishes the cigarettes that she has rolled and sheepishly admits that she “makes people feel uncomfortable.” Vee is clearly the person that has explained this fact to her. It makes you even angrier at Vee for adding to Suzanne’s negative self-talk because you love Suzanne and you want her to love herself and hate how Vee manipulates her. UGH, VEE IS TERRIBLE. ANYWAY. 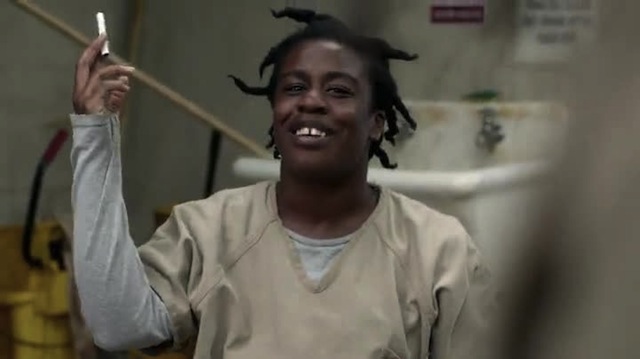 Caputo is scolding all of the corrections officers because Jimmy escaped from prison by accident last week and showed up at Caputo’s shitty rock gig. Instead of being like “aw, that’s so nice, somebody came to this bar to see my totally unremarkable band” Caputo is like “wtf corrections officers how did Jimmy get out of this prison?” 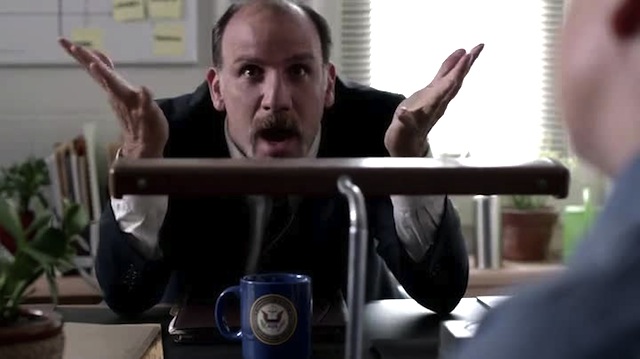 Caputo implements a shot quota. Now all the COs have to give out a minimum of five shots (documented reprimands) per week. This is clearly not a terrible idea that will breed nothing but resentment between all parties involved and ultimately result in the harassment of prison inmates. Just kidding, it’s as terrible as Vee. 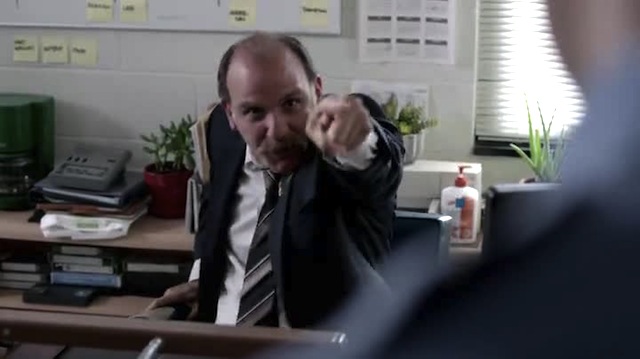 Upon leaving the meeting, a CO immediately demonstrates the failings of the shot quota by writing Cindy up for a minor infraction while ignoring a white inmate performing the same infraction. When Cindy comments on the overt injustice of her shot write-up, the CO escalates the situation and orders her to drop to the floor. It’s flashback time!

Cindy was once a TSA agent! She was once a TSA agent who also abused her own position of authority! Cut to her speeding around in one of those airport go-carts in her TSA uniform, snagging free snacks, groping passengers, stealing electronics from peoples’ luggage. Cindy as a TSA officer clearly can’t abuse her position over a traveler to the same extent that a corrections officer can abuse their position over an inmate, but we see the parallels you are trying to make, OITNB! 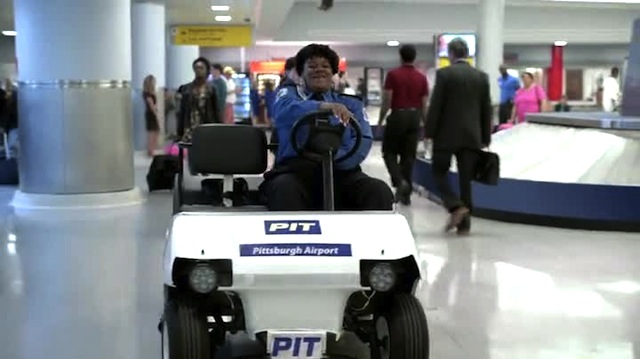 Happiness is a Pittsburgh Airport go-cart 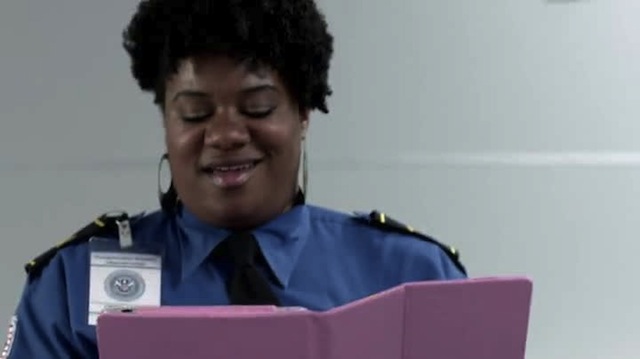 Meanwhile, back at the prison, a journalist dude is meeting with Piper. Piper talks to him about wanting furlough to visit her dying grandmother, and you know, some other unfair prison conditions that don’t involve her (mostly the furlough). Journalist dude says something awesome, which is that he lays awake “fantasizing about personally taking down an institution that is the single greatest stain on the American collective conscience since slavery.” Then he explains that he can’t actually do that, but that he can write a story about how two million dollars was misappropriated at Litchfield if Piper can bring him information about which companies Fig has contracts with.

Piper’s like “I don’t have the internet in here, and even if I did I would be too busy going through the Autostraddle recap archives, and anyway, what do you want me to do, break into Fig’s office and jeopardize my furlough?” Journalist dude’s mouth says “no problem, let me know if you change your mind” but his face says “I AM VRY DISAPPOINTED IN U PIPER U ARE ACTING LIKE SEASON 1 PIPER RN.” 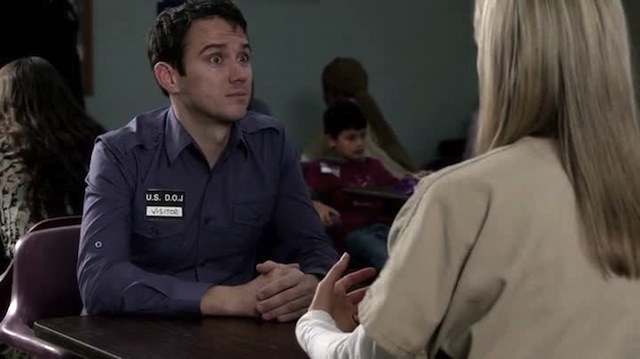 Mal has written 3 articles for us.