Jack Kerouac and Allen Ginsberg will always be icons to young literary hopefuls — for the queer ones, Allen Ginsberg especially. In fact, you might go so far as to say we’re indebted to him. In the newest issue of Longshot Magazine (which is submitted to, compiled, edited, and published all within the space of 48 hours), Steve Silberman discusses exactly how indebted, and why — as one of Ginsbergs’ “apprentices” back at age 19, he’s in a unique position to know.

Ginsberg was 29 when he first performed the poem Howl in San Francisco. When Silberman met him, Ginsberg was 51, and no longer the emblem of iconoclastic youth that he and the rest of the Beat generation had been:

At age 51, he was bald and professorial, sporting rumpled suits and ties from the Salvation Army, because his Buddhist teacher—a Tibetan reincarnate lama named Chögyam Trungpa Rinpoche—told him to clean up his act. One side of his face was slackened by Bell’s palsy; Ginsberg’s right eye stared out through nearly immobile lids, and the right side of his distinctively fleshy lips twisted his wry smile into a grimace.

The differences between young, idealistic and controversial poet Allen Ginsberg and his middle-aged self weren’t just physical. Although a seriously practicing Buddhist, Ginsberg acknowledged by the end of his life that he hadn’t reached the level of enlightenment or been able to bring about the kind of global-scale peace that he had once imagined for himself; where he once wrote about rocking back and forth on late-night subway trains in a benzedrine haze, he now faithfully attended Al-Anon meetings to deal with his partner Peter Orlovsky’s chemical dependencies.

Most seriously of all, his art had changed — those who had originally fallen in love with the unhinged and uncensored nature of poems like Howl, which seemed to be inspired almost by a religious ecstasy, now found him writing much more traditional verse. It was measured and sober, and instead of a drugged-out hipster’s playground it focused on the small victories and defeats of everyday life — but mostly the defeats.

Ginsberg’s last books—all the veils trembling, doves descending of his early work gone—are populated by ordinary people with ordinary (not “cosmic”) problems: the former “hippie flower girl” who drank too much and smashed her jaw in the stairway of Ginsberg’s tenement on Avenue A, the composer a few doors down dying of AIDS, the poet himself dealing with aching bones, a landlord keen to evict him and piles of unread mail, and his elderly relatives, “door after door of Aunts and Uncles retired alive/ white haired, television bound seeing the doctor, eating/ delicatessen salad Sundays, reading best seller/ books, dusting furniture, cleaning kitchen floors, happily/ visiting Doctors for minor blood pressure, depression/ or hernias…”

Longshot Magazine’s whirlwind 48-hour process begins with the announcement of a theme, and this issue’s theme was debt. What did the author feel he owed to Ginsberg? Maybe surprisingly or maybe not, he locates his gratitude towards him not necessarily in his years as a pioneer of a new kind of poetry and a new standard of what art could be, but in his later years, his time of admitting his multitude of small personal failures. 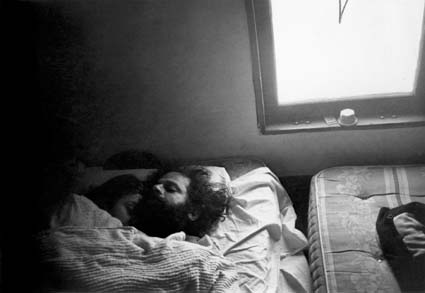 It’s a dangerous thing for us whenever a hero — an artist, a writer, a celebrity, a teacher, a friend — chooses to step off the pedestal we’ve put them on (or worse, is pushed off it). By definition, the process of idolizing demands an idol, not a person. But Silberman’s essay is a way of looking at what we owe to those people who push us to see them as people, who refuse to let us celebrate their successes while pretending their failures don’t exist. If he had remained committed to a (relatively) fearless and cocky young Ginsberg who thought that heartfelt poetry could save the world, Silberman says he would have found himself completely devastated by the catastrophes later in his own life that are the direct result of a decidedly un-saved world. Without the lessons of an older,  humbler, wiser Ginsberg, he says, “I would have thought I was entitled to a more excellent universe than the one we find ourselves in.”

Ginsberg isn’t the only beloved artist whose life has been less perfect than his art says he wanted it to be. Because of course that’s true for everyone. We read poetry, or novels, or watch movies, or go to see art as a way to respond to our own flaws and inconsistencies and tiny failures and betrayals of the self, but it can be tempting to pretend that the people whose work we consume have none of them – or if they do, they are huge and sweeping and grand, they are art in and of themselves. Allen Ginsbergs’ father was buried “in the shadow of a huge Anheuser-Busch plant near Newark Airport.” The real tragedies of life are the opposite of grand. But when we’re able to see this and want to keep looking, keep watching, keep reading even after the fact, then we are able to appreciate something maybe more important even than Howl (which really is saying a lot). We are not entitled to an excellent universe; we do not live in one. But there are excellent people in it, and the point here, of Silberman’s, of Ginsberg’s, of poetry’s, is that even when it is not good or great it can be beautiful.