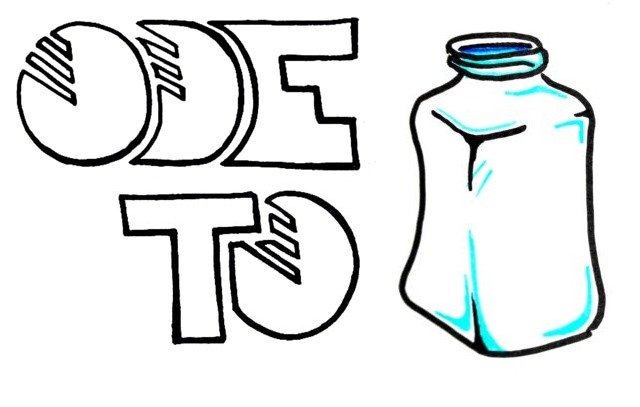 What’s a pantry without some preserved goods? If cooking’s an art and baking’s a science, canning is a carefully calculated bet. While you can come away with a rainbow cellar of jars packed with summer goods to the ceiling, you can also come away with a pantry full of exploded jars and mold.

Canning came into being in 1810 thanks to a confectioner and a guy with a complex. Given that armies travel on their stomach’s, Napoleon knew that the only way to win a war would be to ensure his army was well fed. So he offered up a 12,000 franc prize in 1795 to whomever could devise a method for preserving food and Nicolas François Appert was just that guy. Even though he didn’t know what was going on in those sealed glass jars , his method appeared to keep spoilage at bay. Take food, shove in a glass jar, cork it up, seal it with wax and boil the bejesus out of it. Napolean (and his soldiers) approved. 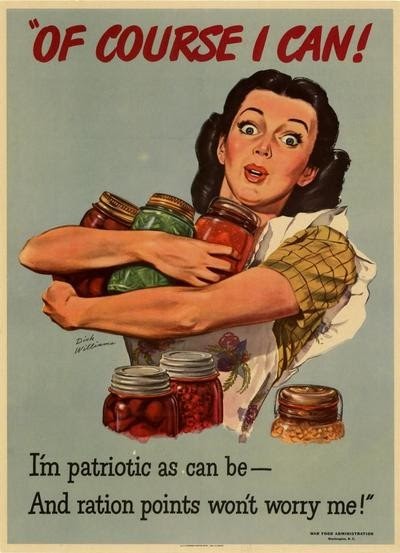 But while most of Appert’s method still stands, there are plenty improvements since his “shove a whole sheep in a jar” days. One of the reasons his method worked so well was that they boiled it for ages, leaving preserved “edibles” lacking in flavour, texture and nutrients. Pasteur developed his germ theory fiftyish years later to explain food spoilage and also developed discovered that sometimes a quick dose of high heat is just as effective as low and long heating.

Boiling the bejesus out of your cans won’t always be enough. While most of your foodborne nasties are killed by the high heat, there’s one jerk in particular that’s devised a way of sticking around. When Clostridium botulinin feels the heat and sees the unwelcome sign, instead of politely packing his bags, he’ll produce spores to wait out the rough patch. Then, when your jar of preserves is cooling in your cupboard, the spores will come back from their zombified state, BAM! They’re munching on all of your lovely foodstuffs producing gases, bulging lids and botulinin toxin while they’re at it.

When you’re trying to figure out how to preserve your treats, look to Bernardin (and other jar producers) or the National Centre for Food Preservation  for some super safe recipes. Canned tomatoes? Dilly beans? Blueberry jam? Super easy, but just be sure to pay attention to pH. Even sour foods like tomato need an extra bit of acid as added security against C. botulin. Low acidity foods like meat and fish need to be processed in a pressure canner that can up the contents higher than water’s boiling point. But if something seems off, look for a second opinion on whether your recipe’s safe or not.

Now that you know what you’re making, how do you safely can and keep the zombies at bay? We’re looking for a tight seal to get our bugs out of the way. With proper preservation, the food will reach a high enough temp to nuke the microbes and the jar will form a tight seal to prevent anything good from getting out and anything nasty getting in. If you’re looking at Appert’s L’Art de conserver les substances animales et végétales or your grandma’s recipes, just be a little bit skeptical of the recipes and methods. Certain canning methods like open kettle canning (pouring hot liquid into jars and closing), paraffin wax sealing (pouring layers of food-safe wax directly onto the food’s surface), oven or steam canning (heating jars via steam produced by an oven’s waterbath or steam kettle) aren’t considered safe anymore since they don’t sterilize the container and its contents. Even though your grandma swore by it and hadn’t gotten sick doesn’t mean it’s foolproof. And considering that C. botulin‘s toxin causes paralysis among other things, you probably don’t want to play too loose with that.

If all of that botulism talk didn’t give you a hint, we’re trying to keep everything clean and microbe free. Make sure all of your ingredients are as fresh as possible and well cleaned with warm water (I like to lace mine with apple cider vinegar). Wash your jars and lids with hot soapy water before sterilizing the jars, but not the lids. You can immerse each jar in boiling water for 10 minutes to get rid of the nasties , run it through the dishwasher or load it into a cold oven before warming to 250°F and holding it there for 20 minutes. Whatever method you use, just be sure not to touch the insides as you remove it lest you undo all of your hard work. 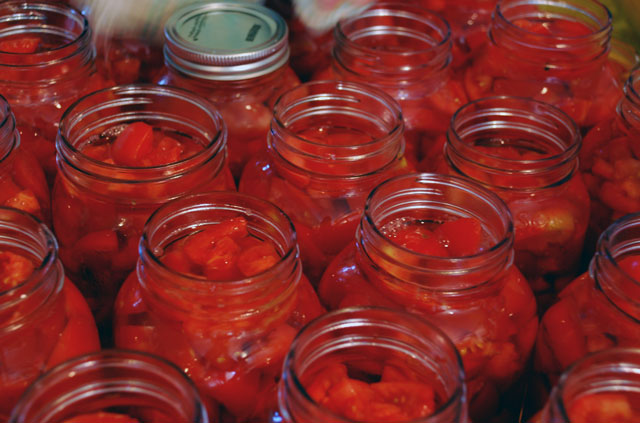 If you’re a canning virgin, stick to something simple like the boiling-water method. Fill your sterilized jar up to the shoulder with foodstuff and up to the base of the neck with liquid. You just want to leave enough headspace for the air to be pushed out and a vacuum to form. Be sure to knock around the inside of whatever you’re canning (ie. pickles, tomatoes, beans) with a clean chopstick to release any airpockets that might increase the headspace. Clean the jar’s rim with a paper towel. When it’s time to put a ring on it, lean towards lazy and leave it loose. You want the ring to be just tight enough to hold the lid in place and allow the trapped gases to bubble out. A good rule of thumb is to use the tips of your fingers instead of your entire hand to fasten since you can’t get a great grip on it (hence the call for “finger-tight” lids). Immerse it in your largest pot and cover the top with an inch of water. Bring to a boil and keep it rolling for the entire processing time. Find your jars a happy resting place and leave them be for the rest of the day. As the jars start to cool, the vacuum will contract and eventually succumb to the crushing force that is atmospheric pressure! At this point your concave top will buckle into a non-moving innie with a satisfying pop and your rubber seal will fuse to the jar rim. If you have any stragglers with outies, shove them into the fridge or pry off the lid and reprocess with a fresh lid. 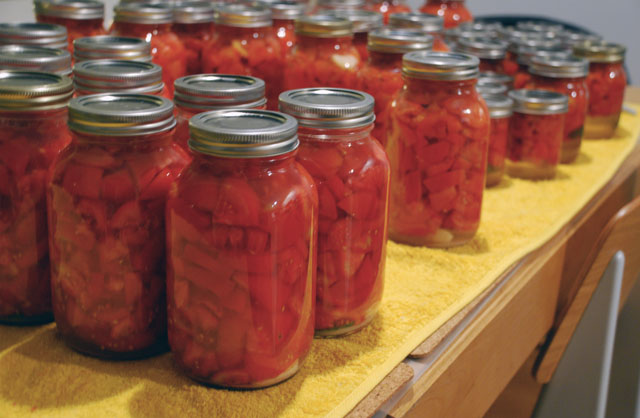 Although canning can be relaxing and rewarding when you finally put something up, it can still cause you to freak the fuck out. If you’ve figured out all the ways to avoid getting stomach bugs, here are few extra tips to prevent yourself from getting sick to your stomach with grief.

Do a test run. Even if you canned two fucking bushels of tomatoes last year and you swear your rig works, check it anyways. You might have bought a different style of jar or forgot you were using your ex-roomie’s stock pot for processing and now your preserves are too tall or too wide. (In case you were wondering, canning jars on their sides doesn’t really work since liquid will spill out or the lid will be fastened too tightly for the air to escape.) To save yourself frustration, time and heartbreak, look ahead and either borrow from a friend or make a new investment. 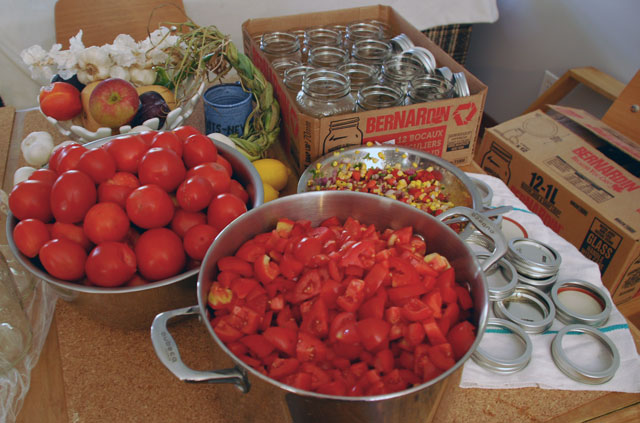 All the tomatoes all the ways.

Make sure you can can on your stove. Sound stupid right? But some glass top and flattop stoves aren’t suitable for canning. This might mean your pressure canner causes the cooktop to scratch or the entire surface to crack. Check with your manufacturer to see what your surface can handle lest you piss off your parents/roomies/landlord/bank account.

Buy extra lids. If your cans don’t pop, they’ll need to be reprocessed or eaten ASAP. If you’re going the reprocessing route, you need to remember that the sealant is shot after one go. So if you think you might fuck up (or are reusing some old jars), always keep some lids around.

Invite friends over. People are lovely, eight hours of mundane chores go much faster. Assign tasks so everything can be done at a consistent rate. Processing takes the longest time, so  don’t leave all of your boiling until the very end. As other people are cleaning, cutting and measuring ingredients, one person should be cleaning, sterilizing and finishing the jars so they can start the processing process. 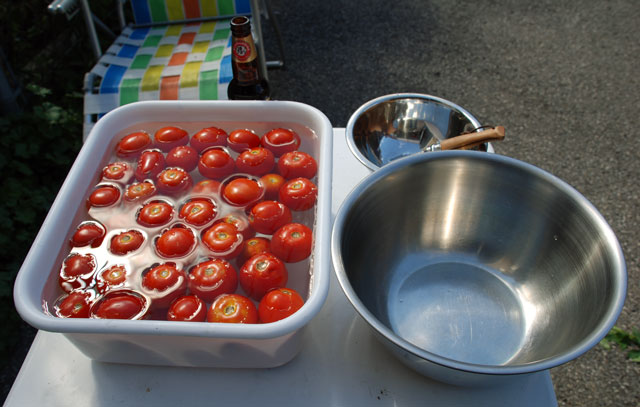 Tomato Prep 1: The all important washing, hulling and beering step

Buy a second case of beer. Possibly a third. And snacks while you’re at it. No matter how much time you think you’ll take, be prepared for a few extra hours.

Make sure to thank your teachers. If your grandma or best friend or odd Uncle Freddie taught you how to make the best jam in the world, be sure to thank them and  share a jar to show how much you learned. It’s practically canning karma! Keep your enemies close and your canning allies closer! Also, here’s a giant thanks to Anna and Kathleen for partnering with me for the ten hour 62.5L tomato marathon.