A federal judge has ruled that New York City’s much-debated “Stop and Frisk” policy has violated the constitutional rights of people of color. Judge Shira Scheindlin’s 195-page decision also called for a federal monitor to track the New York Police Department as it institutes reforms to the program, so it’s too early to tell exactly how the procedure will change, but activists are already celebrating, and rightly so.

A little background: Stop-and-frisk tactics have been used by the NYPD since at least the 1970s. Under the policy, police can stop pedestrians without cause and search them for weapons or contraband. The stops are often unrelated to suspicion of criminal activity, and many report feeling intimidated by or frightened of police after an unprompted stop-and-frisk encounter. The first video from the Where Am I Going campaign, which tracks experiences under the policy, shows the long-term effects even one stop can have on a young person’s view of law enforcement:

via Where Am I Going

The practice has been lauded as part of Mayor Michael Bloomberg’s broad crime reduction efforts, and murders have indeed gone down since Bloomberg entered office in 2002. However, random stops have not decreased as crime rates have lowered, and black and Latino communities in particular have been targeted by stop-and-frisk. In 2012, a full 55% of the 532,911 New Yorkers stopped were black, followed by 32% Latino and 10% white, according to data tracked by the New York Civil Liberties Union (despite the fact that according to the NYPD’s own data, whites are more likely to be found carrying drugs or weapons).

More and more activists have called for the policy’s termination, and in the meantime, public scrutiny has turned toward tracking the stops themselves via audio and video recording. In February, the NYCLU released a smartphone app called Stop & Frisk Watch to help passersby record police behavior during stops they see on the streets. According to the Civilian Complaint Review Board, which is tasked with monitoring the NYPD’s behavior, one third of all complaints against the department between 2005 and 2010 were related to stop-and-frisk encounters.

So it’s long been clear to most that stop-and-frisk, while technically constitutional, is pretty messed up in the way NYPD uses it. (For an excellent explanation of New York’s stop-and-frisk problem, including helpful graphs, see this Mother Jones piece.) 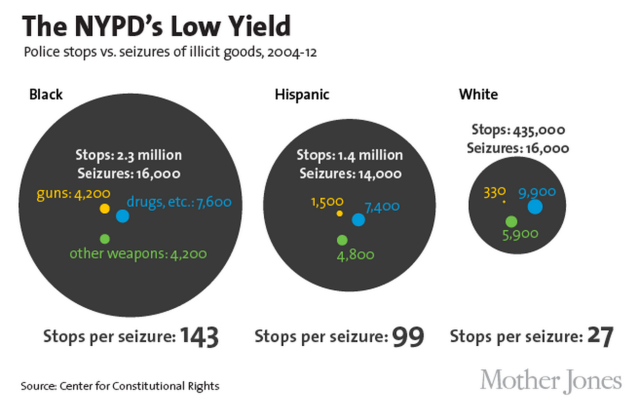 One of these things is not like the others.
via Mother Jones

In addition to creating the federal oversight program, Scheindlin called for officers to wear cameras and hold a number of community meetings to get widespread input on how to reform the program. Given the importance of neighborhood activism in getting this issue to the national stage, it is incredibly important that the NYPD be required to talk to those activists while it makes changes. Scheindlin lays this out pretty clearly in her decision:

“No one should live in fear of being stopped whenever he leaves his home to go about the activities of daily life. …Some plaintiffs testified that stops make them feel unwelcome in some parts of the City, and distrustful of the police. This alienation cannot be good for the police, the community, or its leaders. Fostering trust and confidence between the police and the community would be an improvement for everyone.”

We’ve yet to hear exactly how NYPD will handle the federal ruling, but Bloomberg addressed the press in a conference this afternoon to announce the city will appeal. Bloomberg was visibly frustrated during the conference, accusing Scheindlin of anti-police bias and repeating the claim that stop-and-frisk is key to crime reduction. NYPD Commissioner Ray Kelly was also there to defend his department from accusations of bias, which it can’t possibly engage in, because that’s against the rules, right?

In another key passage from the ruling, Scheindlin takes police to task for attempted to stop crime at seemingly any cost: “Many police practices may be useful for fighting crime — preventive detention or coerced confessions, for example — but because they are unconstitutional they cannot be used, no matter how effective.” To many, it seems like an obvious point, but there are many people in power to whom it still isn’t clear: illegal actions taken in the name of reducing crime don’t just become okay.