It’s a new day, and global warming could soon release ghost towns from their icy graves. What a world! Here are some links for your face.

+ Emily Graslie made a video about parasites and why they’re not all creepy.

+ Following what sounds like an interesting panel on decolonization put together by Mandi Smallhorne at WCSJ, scientists have been having tweeting under #decolonizescience.

+ Ecologist Gail Patricelli is one of a few researchers using robotic birds to study avian courtship. For the past decade, her current research has focused on the Greater Sage-Grouse, and she calls the latest versions of her robotic birds “fembots.” 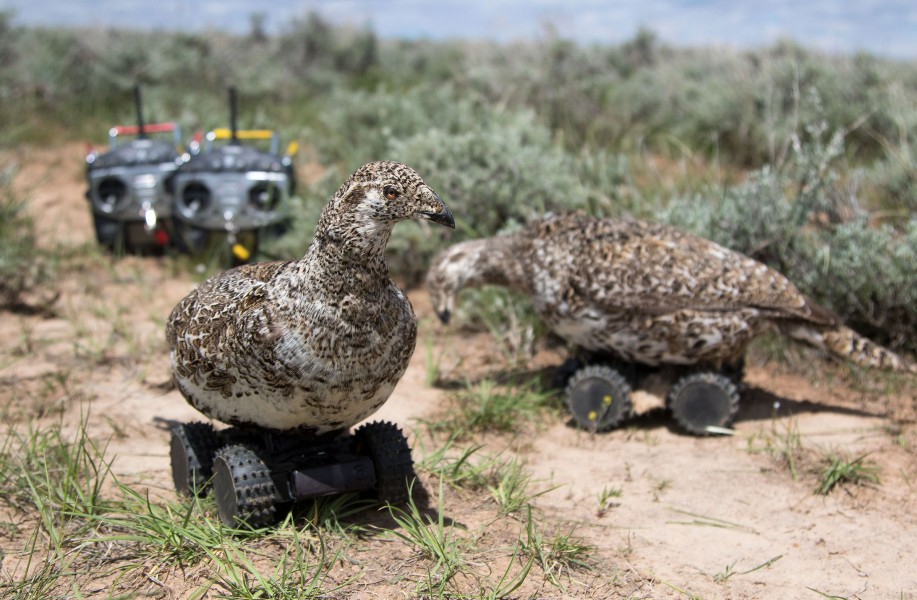 “Anything brown and round is fair game,” says Patricelli, who says she’s even seen Greater Sage-Grouses try to mate with dried cow poop when nothing more promising was around. “The bar is pretty low for us in trying to fool the males.” Photo: Gail L. Patricelli. Via Audobon.

+ Emily Lakdawalla: The Moon’s Giordano Bruno crater through many eyes

+ Record surge in atmospheric CO2 seen in 2016. Methane levels are rising too, scientists not really sure why. So that’s not great.

+ In unprecedented shift, EPA to prohibit scientists who receive agency funding from serving as advisers. At least three of the listed replacement appointees have backgrounds working for large corporations whose activities are or could potentially be regulated by the EPA.

+ Bacteria can begin evolving resistance to antibiotics that they haven’t even encountered yet.

+ Remember a few weeks ago when we discussed energy restoration in Puerto Rico and noted out that the contractor situation with Whitefish was being handled in an unusual way? Well, a leaked copy of the contract recently revealed terms that barred penalties for work delays and prohibited the project from being audited. It also turns out Whitefish Energy is based in the tiny hometown of Interior Secretary Ryan Zinke, and the head of the private equity company that backs Whitefish, Joe Colonnetta, was a Trump campaign donor.

Following public outcry, PREPA canceled the $300 million contract. Fluor is now the primary contractor on Puerto Rico. As of Tuesday, roughly 70 percent of Puerto Ricans have no electricity, and 20 percent are without water. The US military has also started pulling troops. We should continue watching what happens here, and in particular, watching where money is going; disaster capitalism is clearly in full effect.

+ The Unforgiving Math That Stops Epidemics

+ I found this fascinating: Vikings Razed the Forests. Can Iceland Regrow Them?

+ Women confronting sexual harassment in chemistry. (Because academia has a sexual harrassment problem, too.)

+ Lisa Munro on saying “no” and having boundaries:

As an academic, you’re supposed to say yes to everything and everyone in order to make your CV longer and more substantial. Not only are you supposed to say yes to everything, but the people around you expect that you’ll say yes to all kinds of things that they want you to do at your expense. You might recognize this model as exploitation and you would be right. One of the truly empowering things about being an ex-academic is this: you don’t have to participate in exploitative labor practices.

+ A call for Simons Collaboration Grants to re-rethink its policies

+ Professor Helen Roy would like your observations of ladybirds, please.

+ Chemist Dr. Raychelle Burks and biologist Dr. DN Lee are visiting London from November 18-24 and will be doing a London #BlackandSTEM meetup, a #scicomm peeps meetup, and a Superhero Hackathon. More info here.