Warning: This post will have explicit spoilers for the first half of Teenage Bounty Hunters, though I won’t give away the whole season. I went into this show knowing someone got gay but not knowing who and I highly recommend that journey, but if you need more convincing than me telling you it’s a quirky comedy with queer teen girls, keep reading. If you’re already sold, go venture forth to Netflix and come back when you’re done so we can discuss in the comments.

With so many shows these days being retellings of the same old myths or remakes of TV shows from decades ago, it always feels like a breath of fresh air when someone gives us something brand new.

When I heard the name of Jenji Kohan’s new show Teenage Bounty Hunters, my first knee-jerk reaction was to mourn Sweet/Vicious. I was like, “Why would they bring back teen vigilantes and not be MY teen vigilantes.” But I was all of 20 seconds in and the pan of the fancy religious high school revealed a sign that said, “This school is prayer conditioned!” and I knew I was in for a totally different kind of show. And it sure is different. Brand spankin’ new.

The general premise is that twin sisters Sterling and Blair sort of… happen into the profession of bounty hunting. Blair is fast and clever and Sterling is logical and good with a gun and actual bounty hunter Bowser reluctantly takes them under his wing. They tell their parents they’re working at Bowser’s yogurt shop, when in reality they’re helping him hunt down skips and saving up money to fix their dad’s car that they crashed. They have to balance their double life as ordinary teenagers and bounty hunters, all while maintaining relationships with their parents, their friends, their love interests, and each other. The show is quick-witted and quirky and goofy but full of heart and feeling.

It seems that before the events of the show, things were pretty status quo for the Wesley girls. Blair was the rock star rebel who loved to scandalize people in her religious community by talking about sex (but never having it), and Sterling was the model student who never broke the rules. But in the first episode, Sterling takes a perfectly manicured finger and taps a domino and watches their carefully constructed world tumble around them little by little… and she kind of likes it.

Know who else she kind of likes? Her arch-nemesis April Stevens. April has a face like Gia from Full House but the energy of Mandy Moore in Saved. She is wound tight and has her own version of the Cordettes and is on a mission to take Sterling down because of an Incident in the fifth grade.

And April is not the kind of character I usually identify with (she’s stern and bossy and frankly a bit mean) but I ended up relating to her more than I would have anticipated as she started to open up to Sterling. You see, she always had…intense friendships with her female friends. In fact, Sterling thought she and April just grew apart, but April remembers the moment Sterling broke her heart at recess. But what’s adorable is, it sounds a little like Sterling was trying to make sure her best friend wasn’t sitting alone, so she introduced her to a new group of friends. April saw it as Sterling trying to pawn her off on other people, that Sterling didn’t want her around anymore.

Which is only the kind of thing you think and hold onto for years when you have a big lesbian crush on someone and don’t have the words or the tools to deal with such things because after you’re finished with your pudding cup at snack time the adults in your life tell you to pull out your book that very explicitly states that homosexuals will burn in the fiery depths of hell and you’re a good Christian girl so you hadn’t even dared consider that possibility. 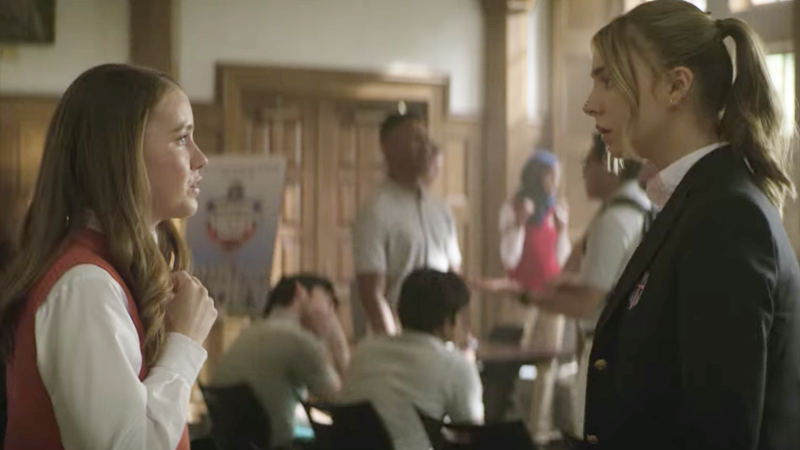 Also one thing I love about Sterling and April as they figure out their feelings is that neither of them have really internalized the homophobia they are surrounded by. They have smartphones and the internet, they’re growing up in the era of shows like One Day at a Time, Euphoria, and The Bold Type. (I just realized I don’t actually know what teenagers these days are watching but everyone on the CW is gay so my point is, they’ve been exposed.) April is already fully aware she’s a lesbian by the time she is forced to confront her feelings for Sterling. But April isn’t ready. Not because she’s ashamed of who she is, but because she’s afraid of the backlash. They are at a Christian school in Georgia, not in Rosewood, PA; people are still have homophobic slurs comfortably woven into their vocabulary.

It’s all so well done, and between the intense female friendship conversation and a few other things I can’t mention without giving too much away, I felt like I was seeing aspects of my queer life I don’t usually get to see on screen. 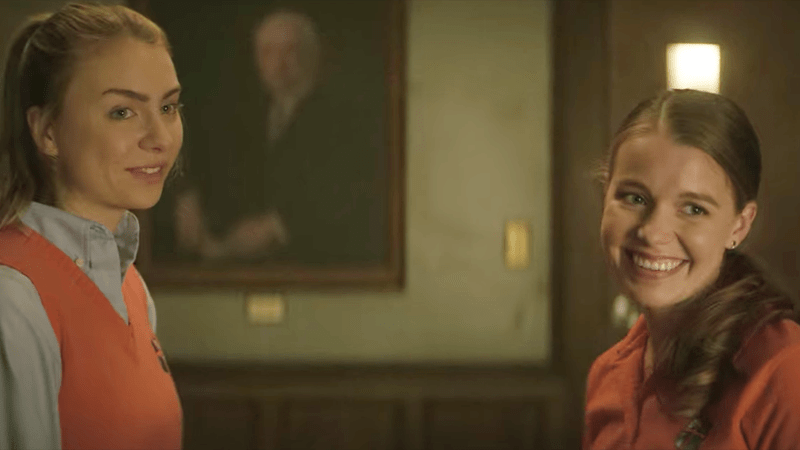 Fake it til you make it. Or out. Whatever works.

This show manages to touch down on so many of my favorite tropes (Sisters as best friends! Reluctant tough guy softened by plucky teenagers!) and flip some of my least favorite on their head (Christian girl saying “God made me gay” instead of fighting it!) and I enjoyed every moment of the ride.

But also y’all the non-gay parts of this show are WILD. They don’t shy away from conversations about race, and they touch on the conflict between being an open-minded teenager in a closed-minded Southern family. Also any and all gay feelings I had were crumbs compared to the feast of DRAMA in the last two episodes of the season. I was on the edge of my seat and I don’t get to say this enough about TV but I got GOT. And I love to get got.

And the writing is just so fun and quippy and smart. You can tell it was created by a woman (Kathleen Jordan), and that there are women in the writers’ room (and specifically queer women, like Lauren Morelli.) The sisterly chemistry between Maddie Phillipps and Anjelica Bette Fellini is so natural, and Devon Hales who plays April does so much subtle face acting it’s a delight to watch.

The finale set itself up perfectly for a second season of hijinx and I really, really hope we get it. I’ll even pray for it if I have to.