“Even after the storyteller is assassinated, the story continues and can never be captured,” performance poet YaliniDream says in her poem “I Choose Peace.”

Yalini’s belief in storytelling to create space for people of marginalized identities who are navigating oppression and diaspora forms the motivation for her writing, performance and collaborations with other artists. She is, as she says, of “Lankan Tamil blood, Manchester-Born, Texas Bred and Brooklyn Steeped.” At UT Austin, she studied theater and Plan II (a squiggly, wonderful liberal arts major that I also did!) and began to engage in radical activism and examine how to use art to inform her politics and vise versa. These days, she’s based in Brooklyn and travels around the world to perform poetry, theater and other arts and create workshops and dialogues around feminism, queer identity, race, nonviolent resistance, art and more.

She’s involved in several performance collaborations, including her current project called DreamWolf with her partner Jendog Lonewolf. They travel to war affected parts of Sri Lanka and to other countries as well as to universities and community projects in the U.S. They just finished engagements at Stanford and in Oakland and San Francisco, and at Hampshire College and Syracuse University. They will perform at the War Resisters’ International Conference in South Africa this July. 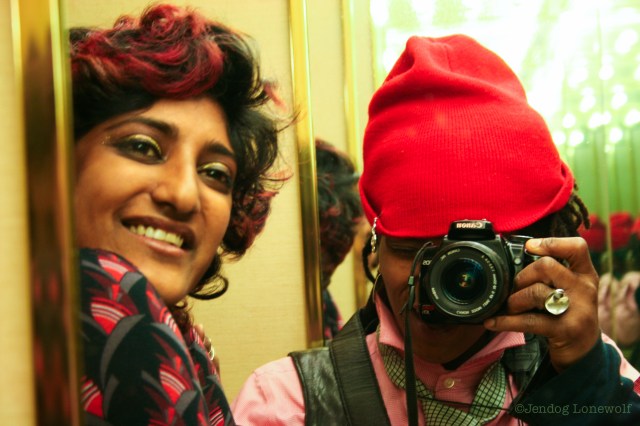 Yalini and I chatted today about her history, activism and art, and how all three inform each other.

How did you get started as an activist and artist?

I started participating in and doing children’s theater at age 12. When I went to study theater at UT, I was cast in a mainstage play my freshman year, and after that I was always called back but never cast. There were very few roles  for people of color. I co-founded a theater company of color called the Drive By Players. Around the same time, I had started being involved in the student movement to establish Asian American Studies on campus. I engaged in a lot of the student movements happening at that time. In Drive By Players we started writing our own stories, and we moved beyond the academy and got more involved with what was happening in the community.  Professor Stephen Gerald directed me to a writing workshop Sharon Bridgforth was conducting. Through her I became connected to the underground hip hop and spoken word communities in Austin. It all really came together when I was in Austin.

How did you turn your converging passions for theater, writing and activism into a career? How do you balance rejecting capitalism with a need to get paid for your work?

I moved to New York in 2000. As a young person in theater, you always think “New York is the place to be.” I was blessed to get oriented to NYC by a mostly Queer South Asian crew of badass New Yorkers who were the driving forces of the South Asian Women’s Creative Collective, including Bushra Rehman, Chitra Ganesh, and DJ Rekha. I also met D’Lo, a super dope and inspiring Transgender Sri Lankan Tamil American Writer/Actor/Comedian. Since I graduated from university, my entire life has been built around creating and presenting and evolving my work.  I also work as a teaching artist. But the reality of many working artists is they need to supplement their artistic income through other means. The pickup work is raced and classed and gendered as well – a lot of it has been babysitting, administrative work and bartending. A lot of people take advantage of and exploit artists, especially if you’re from a marginalized gender or you’re a person of color. You have to push back and say “our work is important, it’s important to our society that independent artists are compensated for our work.”

How does your Sri Lankan heritage and family inform your work?

My parents would much rather me not talk about sexuality. It’s such a new conversation, and they think it’s dangerous. Our entire family has to deal with the homophobia. It’s such a small community, people talk. It’s a stigma that impacts our entire family. At the same time I feel like I have the ability to talk about it much more publicly than so many people in our community, and I feel I have a responsibility for all the gender nonconforming and queer people, for anybody who is not adhering to the norm, to use whatever tools I have, whatever power, whatever ability, to crack open the space so there is more room for all the people in our community. I have to go about it carefully. If we stay silent, we stay complicit with the injustices that exist within our communities.

How do you use your work to speak specifically to Sri Lankans around the world?

I’ve performed everywhere from living rooms to convents to refugee camps, in a women’s shelter, wherever I can get in. Within the Sri Lankan Tamil community, certain conversations around gender and sexuality are still very new, especially around queer sexuality. Northern and eastern Sri Lanka was in civil war for 30 years that ended horrifically in 2009. I feel as though we haven’t reached a just peace in Sri Lanka. What militarization does is it really shrinks the space for civil society movements. There have been incredible feminists and incredible people who are queer or different gendered who have done amazing work, but the dominant nationalisms that rule really narrow that space. A lot of my work is about opening hard conversations in spaces where those conversations haven’t had much room. Politics. Identities. What has happened during the war? So for me, storytelling is such a powerful and necessary tool. How can we reach people’s hearts, how can we open those spaces where things are so narrow and so difficult and give us a little bit of space to have hard conversations? How do we meet people where they are at? I am from a community that has gone through so much, so it’s important for me to recognize where people are at, meet them were they are at, and open that space, so that our community can evolve and make room for all the different people in our community.

What about poetry is so important? How can it be a tool to combat oppression and open up space?

What I love about being a poet vs a politician is I can dream and ask for the ideal, I can say “this is what’s right and this is what’s wrong and this is what’s needed.” I can hold onto what is precious about our ancient and push society forward to evolve and become less violent, less harmful, more loving, more accepting, more magical. Poetry can serve as a beautiful vehicle for the mind. But I also feel that poetry is expressed not just with words but with movement, through song.

Why is performance poetry in particular so vibrant and vital? How do you use performance to further your political and activist goals?

I ended up taking advantage of the fact that I was on the margins. I felt like it turned out to be a really powerful position because I was seen as a woman who didn’t really have any power and it was easy to dismiss me, and queerness was something that’s invisible. I used the power of invisibility to crack open spaces at the edges. The power of performance is impermanence — nobody could catch it and say “here’s proof of what she is saying or doing.” You can introduce ideas through performance and slowly open conversations and help people question what they had been taught to believe. I think that’s what’s so magical and interesting. I was able to be able to do that work undetected. When journalists and other soothsayers of the written word are outcast, starved, threatened, jailed, murdered and silenced, the performed word becomes the communities’ breaths– ephemeral nourishment resuscitating truth.