I spent the earliest months of my suburban transplantation bemoaning my new hometown’s lack of irreverent activist drag nuns, feminist avant-garde theater and visible LGBT people. Tired of hearing me complain that mine was the only car in any given parking lot with a rainbow sticker on it, my bride-to-be finally shot back, “If the fact that I [blank] your [blank] with my [blank] isn’t enough to convince you that you’re not the only lesbian in the neighborhood, then fine, I’ll put a rainbow sticker on my car.” Humbly, I conceded that yes, a sticker would be a lovely addition to her Nissan’s hind quarters, thank you very much.

Before we added two children to our household, I had plenty of time to pull myself hand-over-hand along the queer oxygen cord, back to the mothership of The City, to indulge in film festivals, literary readings, shopping, dancing and dining amongst the rainbow tribe.

But post-kids, and especially post-elementary-school-enrollment, most days my activities are anchored within a three mile radius of our house. These days, instead of riding the train into The City to hear a favorite poet read at Books Inc., I’m acting as the official (and proud) scorekeeper of our kids’ Little League team. In a way, this makes me more lesbian than I was pre-kids: I drive a Subaru with a trunk full of athletic equipment. But it’s not my equipment, so that doesn’t really count.

As much as I love the empowering notion of “queering space,” when I’m the only person at the school talent show rehearsal who recognizes the irony of five fifth-grade girls wearing spandex hot pants, dancing to “YMCA,” it just feels kinda lonely. (Bless you, Twitter and Facebook, my lifelines to queer minds in those trying times.)

I know I’m not alone amongst my queer parent peers when I say that in many ways, I have more in common with straight parents than I do with my kid-less queer counterparts. But I don’t want to let go my connection to the vibrant, boundary-breaking, mind-opening, inventive, inspiring queer culture that’s not immediately accessible to me in my strip-malls-and-big-box-stores environment.

So. How do I keep it queer in my day-to-day life in the suburbs? 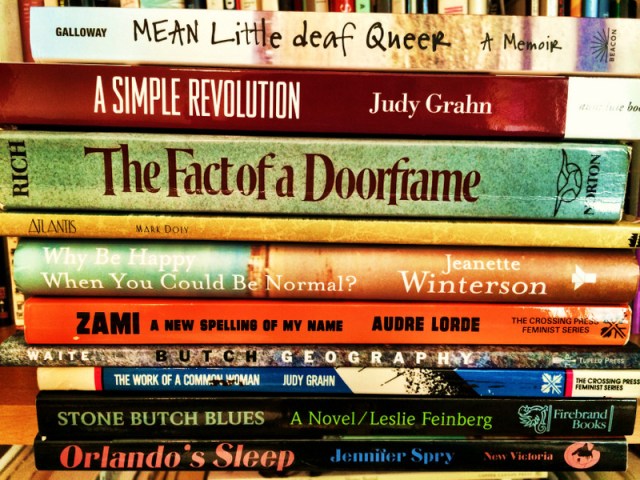 When I’m waiting in the school parking lot for the bell to ring, or in the bleachers at baseball practice, or in the lobby of the place where my kids take music lessons, and I bust out a book like Michelle Tea’s Valencia, or Aaron Smith’s Appetite, or Steve Fellner’s The Weary World Rejoices, or Ellen Bass’ Like a Beggar, or Audre Lorde’s Zami: A New Spelling of My Name, or Stacey Waite’s Butch Geography, or Judy Grahn’s A Simple Revolution (a partial–in both senses of the word–list of titles I’ve read or reread in the past year), I feel two aspects of my identity, queer and parent, knitting together into one seamless fabric.

How about you? What do you do to keep it queer? (Seriously. I’m looking for suggestions.)

Cheryl is a poet-activist-essayist who likes nothing more than laughing at the crazy stuff her kids say. She is the author of Love Song for Baby X: How I Stayed (Almost) Sane on the Rocky Road to Parenthood (a memoir) and In Praise of Falling (a collection of poems). She is the editor of Hitched! Wedding Stories from San Francisco City Hall and co-editor, with Kim Addonizio, of Dorothy Parker’s Elbow: Tattoos on Writers, Writers on Tattoos. Cheryl’s parenting essays have appeared in/on Hip Mama, literarymama.com, mamazine.com, and outandaround.com. She blogs for Huffington Post and lesbian.com, writing from the crossroads of suburbia, parenthood, and lesbian life. Cheryl, her wife Tracie and their two kiddos happily represent the Great American Lesbo Fam in the easternmost quadrant of the San Francisco Bay Area.

VillageQ is a community website welcoming members and allies of the LGBTQ community as we celebrate, support, and explore our collective queer family experiences.

VillageQ has written 2 articles for us.