Over forty years after Roe v. Wade, the fight for reproductive justice continues. Now, the self-described “left flank” organization Reproaction is joining the fight with the intention of pushing pro-choice activism away from reactive and defensive strategies and refusing to settle for compromises or play political games when it comes to full reproductive rights. 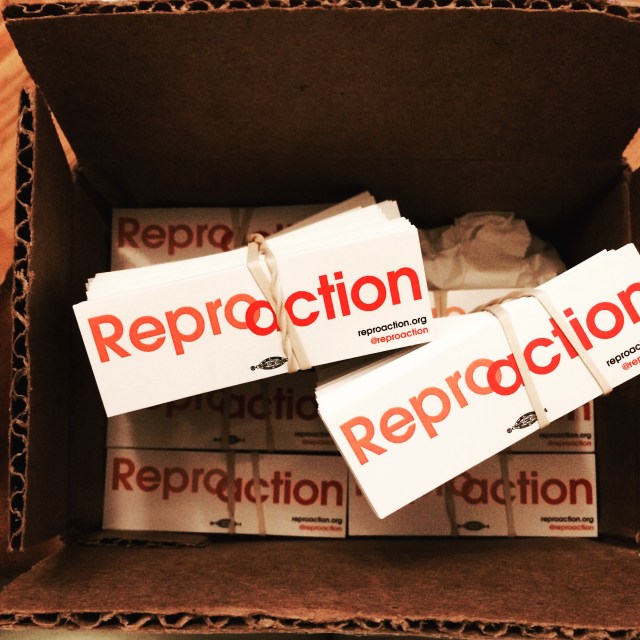 Reproaction was borne out of a simple observation: the pro-choice movement is losing in America. Abortion rights are under attack. Right-wing politicians want to investigate, de-fund, and potentially even go to war with Planned Parenthood. Corporations are fighting for their “right” to deny their employees access to comprehensive birth control — and they’re winning. Black mothers fear for their children’s lives at the hands of police every day. LGBT people face social and legal obstacles to conceiving and adopting children. Sex education in some states is dismal. Our maternal health statistics are depressing.

It isn’t that reproductive justice advocates don’t have support. It’s that they’re waging the wrong fights and using the wrong tactics to survive them.

Reproaction Co-Founders and Co-Directors Erin Matson and Pamela Merritt know this all too well. (Matson is a seasoned pro-choice activist who lives in Washington, DC and has been privy to more than a few national fights for reproductive rights; Merritt lives outside of Ferguson and has seen the devastation of the war on women first-hand from her home in the midwest.) And they aren’t alone.

“Before we took the leap,” Matson told me of the organization’s inception, “activists and organizers around the country confirmed through telephone interviews and convening sessions something that’s fairly obvious: the reproductive rights movement is losing, and we should act more boldly if we want to win. In particular, we saw gaps in the use of direct action as a tactic and a willingness to call out ‘allies’ who call themselves pro-choice and celebrate ‘compromises’ that are actually new restrictions on abortion and other forms of reproductive health care.”

Merritt was at one of these convening sessions, and it’s what compelled her to work with Matson in changing the conversation. “As a reproductive justice activist based in Missouri,” she told me, “I’ve been aware that the reproductive rights movement is losing for a while. I participated in a convening session Erin put together and was relieved to hear participants from all over the country echo my concern and frustration. I was also inspired that people were clearly eager to shift to a proactive stance. I left that convening knowing that I was going to support this effort any way I could.”

What those sessions and conversations led to was a commitment to audacity, to being “raucuous,” and to being unpopular if it means being principled.

“Our movement is losing because we act like losers who are truly, deeply sorry,” Matson and Merritt wrote in Rolling Stone. “We apologize for abortion. We accept the opposition’s premise that the only way to fund other forms of health care is to defund abortion. We celebrate every time President Obama offers a new ‘compromise’ on birth control… We reinforce the lie that abortion, birth control and sexuality are matters of naughty behavior that can be corrected, and we fail to stand up for the dignity of women and all people. That’s not proactive. That’s a blushing and stammering apology.”

Matson and Merritt have already used the Reproaction platform to call out Elizabeth Warren, Hillary Clinton, and Barack Obama, and they’ve already committed themselves to unabashedly supporting abortion as a common health care practice — no stigma attached. Their entire mission is centered around direct action and rabble-rousing where it matters most, versus hobknobbing on the Hill and attempting to work from within a fundamentally lopsided power structure to achieve change.

“We are not trying to placate an opposition that is fundamentally opposed to human rights and dignity,” Matson told me, making it clear that she wasn’t interested in compromising with the right-wing or settling on policies that exclude the most vulnerable populations in the reproductive justice movement for the sake of keeping anyone comfortable. Instead of celebrating when they’re given scraps, the Reproaction Co-Directors intend to push for actual progress — for proactive policies that validate and affirm the need for basic reproductive justice for all.

What that means is that Reproaction will find itself in stark opposition to some of the oldest and most well-funded organizations in the pro-choice movement, many of whom stand by politicians who make compromises on reproductive rights and placate the opposition by furthering shame and stigma by pursuing narratives of assimilation, conformity, acceptability, and — you guessed it — respectability. We’ve all seen these strategies play out, and we all know they don’t work: Pushing for birth control access in the name of those who use contraception to regulate their periods or maintain other areas of their well-being is all good and well, until your employer demands to know why you’re attempting to use it yourself; fighting to keep abortion “safe, legal, and rare” means fighting to keep abortion stigmatized and the people who choose it cast as victims; and demanding the right to queer parenthood because we’re “just like other families” squelches a sense of shared community and camaraderie amongst LGBT parents — and allows arguments about how we’re unfit to parent to go on.

What also separates Reproaction from other reproductive justice organizations is a commitment to intersectional organizing. “We are intentionally proceeding as an intersectional reproductive justice organization, and we know that the right to have a child, the right not to have a child, and the right to raise children in safe and healthy communities is important for everyone — not just heterosexual cisgender women,” Matson told me. “We are interested in providing space for these conversations and the activism that needs to happen.”

Merritt, who is a part of the LGBTQ community, knows that this kind of service for queer and trans folks is long overdue. “LGBTQ people, myself included, are very active in the fight for reproductive rights,” she told me. “And LGBTQ people face unique challenges to accessing reproductive health care in this country that must be acknowledged and addressed if we intend to win. LGBTQ people have always been a vital and important part of reproductive justice work, so there wasn’t any question that we would front and center in Reproaction’s work.” She added that “Reproaction is in this for dignity, justice, and liberation, and that means our work must be intersectional.”

For the leaders of Reproaction, it also goes without question that the parallel fights for LGBTQ and reproductive rights aren’t quite as separate as they may seem. “Both the LGBTQ and the reproductive movements are getting clobbered with religious discrimination bills and clauses,” Matson added. “Our fates are very much intertwined.” They take that connectivity seriously, and both activists have been receiving mentorship from GetEQUAL to get off the ground. “Reproaction would not be where it is today without some of the finest and bravest leaders of the LGBTQ movement,” Matson said, “and this thinking is baked into our DNA.”

As the established pro-choice movement has grappled with LGBTQ identities and intersectional frameworks, we’ve lost precious time in safeguarding our victories and pushing for even more of them. And as the GOP has advanced in political maneuvers that close abortion clinics, restrict birth control, and put individual lives and whole communities at risk, activists and advocates have found themselves exhausted by the task of simply ensuring the progress we’ve made doesn’t get rolled back. The time to launch a new fight for reproductive justice is long overdue, and Matson and Merritt are on the front lines of the push to make sure it happens.