Warning: Extreme spoilers for literally all of Marvel’s Runaways ahead. Proceed with caution.

I knew I would love Runaways before I ever saw the pilot episode. A ragtag group of teens with various skills and powers working together to stop their evil parents? Yes, please. But I had no idea how deeply into my heart these kids would burrow, nor did I know that within it I would find one of my favorite queer love stories of all time. 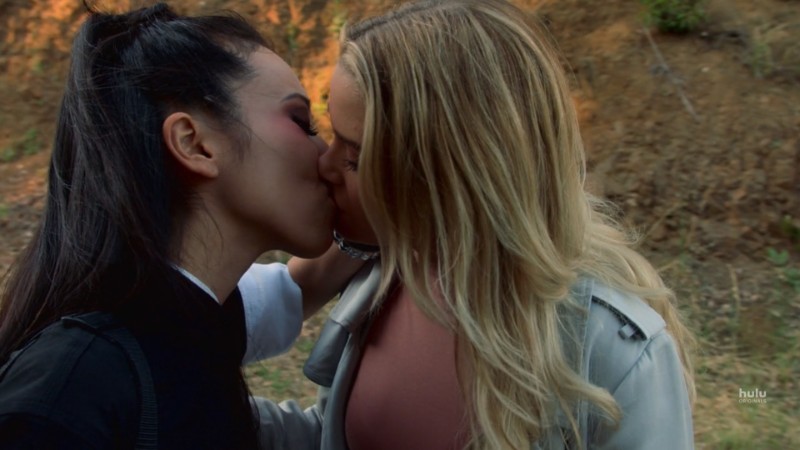 This is from this season but also their first kiss is also the BEST.

While on the surface Runaways is about ancient aliens and mad scientists and evil witches, at its heart, it’s about family. It’s about learning your parents aren’t as perfect as you thought when you were younger, it’s about realizing how much you are or aren’t like the people who raised you, how much can be forgiven and how far you can be pushed before that familial bond is broken, and, arguably the most important lesson: blood doesn’t make a family; love makes a family. And sometimes that will include the people you’re blood related to, but sometimes it won’t. Sometimes it will be a combination of the people who raised you and the people you met that helped you grow. Sometimes it will be the fellow teens you hid in an underground mansion with while your alien dad ate children for their youth. 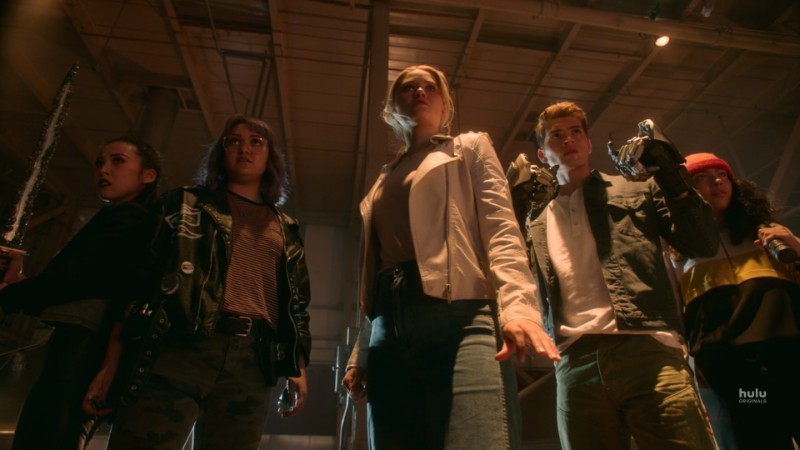 An alien, a witch, a super-strong girl, a feminist with a psychic link with a dinosaur, a genius (not pictured),…and Chase. He’s got fistigons. Sometimes.

And don’t get me wrong, I love the sci-fi aspects of this show. The beginning of this season had Karolina, Chase, and Janet in an algorithm designed to combine their greatest desires, and we got to see Karolina’s dream wedding with Nico. It was a sweet way to give us tender wedding moments without rushing teenagers into marriage. It was an imagined future, and it was perfect. (Well, until it wasn’t.) Also, episode 305, “Enter the Dreamland” was one of the best episodes of the series to date, casting each of the Runaways into their own personal nightmare scenario. Karolina was faced with the ghosts of the children killed for her father’s continuation and a horrifying vision of what she believes could become of Nico if she continues down a dark path. (Another great thing about this season is that Tandy and Tyrone from Marvel’s Cloak & Dagger popped by for a bit, which was bittersweet in that it was really great but now that both shows are gone we won’t get to see all of our sweet baby traumatized magic teens together anymore.)

That was the crux of Karolina and Nico’s relationship this season. They talked about it a little before, how Karolina’s magic comes from her light and Nico’s comes from darkness. But how neither is necessarily good or bad; just different. They balance each other. But this season Nico’s powers grow quickly and she finds herself unable to control herself as she gets in her head about the people she’s hurt and could hurt.

As the season goes on, Nico and Karolina find themselves at a fork in the road that leads Karolina to question whether they’re on the same path. But one thing stays true: she loves Nico and believes she can learn to control her magic without giving into the darkness, if she wants to.

The finale of this season, which effectively serves as the series finale, though I don’t think it was written as such, offers us two potential timelines for the future. The first was terrible, because Gert was dead and the Runaways were all spit up. Sure, everyone was doing okay. Molly was the friendliest head cheerleader anyone’s ever seen, still living with Old Lace and Chase (who was Doing Science and mostly locked in his room.) Alex was the head of a tech company, Nico learned to control her powers. But the thing is, Nico left without warning and was gone for three years to do this. So in her absence, Karolina moved on, and got a sweet, lovely college girlfriend. 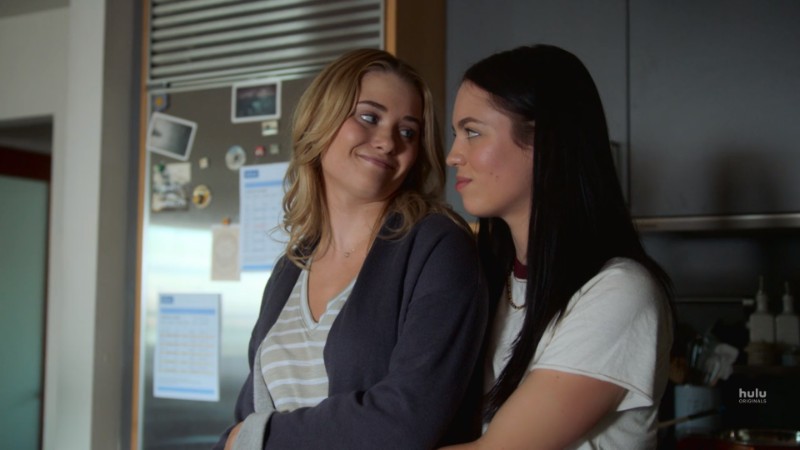 This was rude because I obviously am rooting for Karolina/Nico but also this was pretty damn cute.

But this timeline is interrupted by an angry, time-traveling Alex who wants to disrupt the future he lives in by killing Nico, and they all jump back through time. The finale is perfect, because it does three things. First, it shows us one potential future that’s technically fine but honestly pretty bleak; who they could have been. Then, it takes us back to where we started, when the Runaways were in high school, before they all found each other; who they were. Last, they change the events ever so slightly to save Gert and stay together; who they were meant to be.

While their future and present selves overlapped to try to change the outcome of the fight with the big bad boob witch, Nico took a moment to break the rules of time travel and talk to her younger self. A chance so many of us would take if she could. Because her and Karolina had just overheard themselves having a conversation, where Nico apologized for pulling away and thanked Karolina for believing in her, and Karolina said she would always believe in her, no matter what. 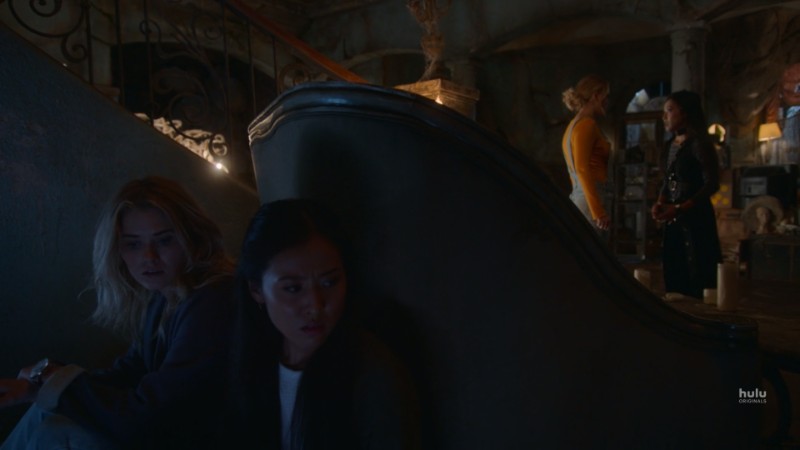 I loved this moment more than I could possibly describe.

Nico told her younger self that she knows she didn’t really take to heart what Karolina said. That she should listen and stay instead of disappearing. She should let Karolina show her the light instead of going off on her own and trying to create it from scratch.

After they save Gert, and before their future selves disappear out of existence, Future Nico tries to apologize to Future Karolina for leaving, but Karolina knows that’s all moot now, since their timelines are changing before their eyes. Instead she asks only one thing of Nico: Promise you’ll find me.

And I believe they do. We’ll never know for sure, I guess, if the TV version of Nico and Karolina end up together romantically in the end. But the last shot of the series is all six kids, together. Off to share a meal, something they fought to be able to do together. Something they did together even when they had to had to get their food from dumpsters. Because while they reconciled with some of their parents by the time the final battle came around, they don’t need them anymore. They have each other. Their found family is the most important thing, and it’s what allowed them to win all the battles they won. And to survive all the ones they didn’t. 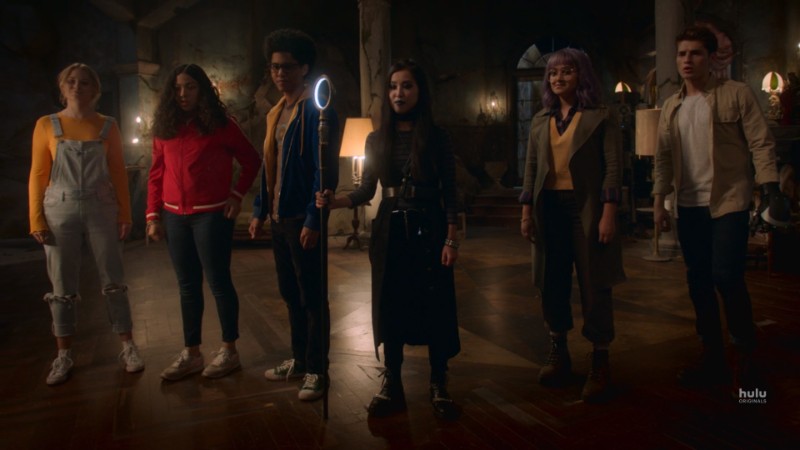 These group shots gave me life. I love this found family so much.

And what I also liked was that, no matter what version of the future happens next, whether Nico and Karolina end up together or not, we have no reason to believe they won’t have a happy ending. Even in the darker of the two timelines, when the friends were apart with one member of their family gone, Karolina and Nico, despite not being together, were happy. Were they AS happy as they would have been if they stayed together? Who can tell. It hurt my heart that they were apart, but Karolina was so happy with her girlfriend, and Nico seemed so peaceful and in control. And in a time happy endings are never a guarantee, it was nice to feel like no matter what happened, our girls were going to be okay. It still feels rare that queer women get any kind of happy ending on TV, so to get multiple possibilities for different versions of happy? It was kind of amazing.

The finale left a lot of doors open and a lot of questions unanswered, which is why I feel like they were really gunning for at least one more season before it was announced that Marvel wasn’t continuing Runaways or Cloak & Dagger anymore. I would like to think that, given proper time, we would have been able to fast forward to a future where Karolina’s algorithm wedding dreams came true (well, the good parts), and her and Nico got an even more solid happily ever after. But, as it stood, considering they seemed to have gotten the rug pulled from under them, I think the best we could have hoped for is seeing a potential reality where even if they aren’t together, they’re okay. And also a promise that they’re more likely to stay together this time around. Together, the light and the dark, in perfect harmony.