Before we get into some of the plot developments of “Metamorphisis,” let’s take a moment to talk about the way Marvel’s Runaways’ marketing campaign has framed Karolina and Chase.

I have nothing against a slow-burn coming out narrative. In fact, sometimes they can be very well done, and for those of us who did take a little longer to come out, they can be highly relatable. It was reassuring to me that Karolina’s queerness could be seen in subtle moments from the very first episode. I like to think that I would have picked up on these moments even if I didn’t already know that Karolina Dean is canonically gay (to be fair, I pick up on queer subtext when it’s not even there). Karolina’s crush on Nico is as obvious to me as Gert’s crush on Chase. It’s all laid out pretty plainly in the way Karolina looks at Nico, the way she responds to her touch.

And in “Metamorphosis,” Nico and Karolina share their most intimate scenes to date, a dazzling sequence of the two helping each other get ready for the gala, followed by a vulnerable conversation on Karolina’s bed. Karolina maybe even almost kisses her; the momentum is there, her center of gravity shifting closer to Nico. It doesn’t happen, but the possibility is electrifying.

SO WHY THE FUCK DOES THE HULU PRESS SITE INCLUDE A STILL OF KAROLINA AND CHASE ON THE ROOF AND NONE OF KAROLINA AND NICO? Why peddle a kiss that means nothing over a moment that means everything? I’m not necessarily mad that the kiss happens. Chase’s feelings for Karolina have been pretty obvious. And Virginia Gardner’s performance makes it very clear that Karolina is not into Chase, that the kiss reaffirms feelings already swirling in that radiant rainbow body of hers. What I am mad about is the way Hulu privileges this moment between Karolina and Chase which, out of context, connotes romance between them. 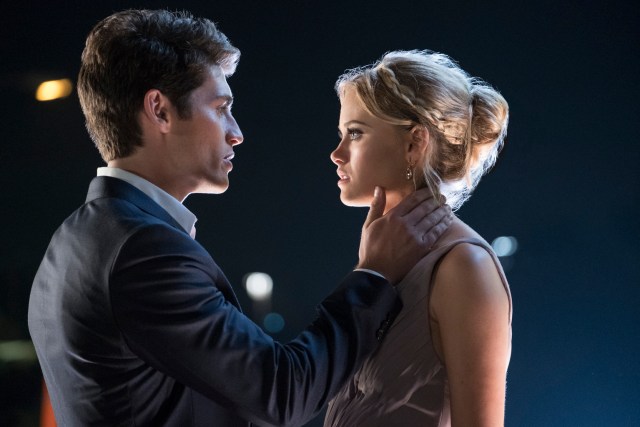 Meanwhile, the most romantic scene of the entire episode is by far Karolina and Nico getting ready for the party and then talking about Karolina’s glowing gifts. Karolina opens up to Nico in a way she hasn’t with anyone else—not even Chase. She talks about how she has never done anything disobedient or different or that she really wanted. As someone whose compulsion to follow rules — even rules set in place by societal norms — kept me in denial about my sexuality, this confession resonated with me. The tangled emotions Karolina feels about her glowing abilities offers her a way to talk about her tangled emotions about her sexuality without actually talking about it. Both are complicated parts of her identity that she’s only just beginning to figure out, and the subtext of her conversation with Nico is powerful and messy, full of emotions that haven’t quite synthesized. 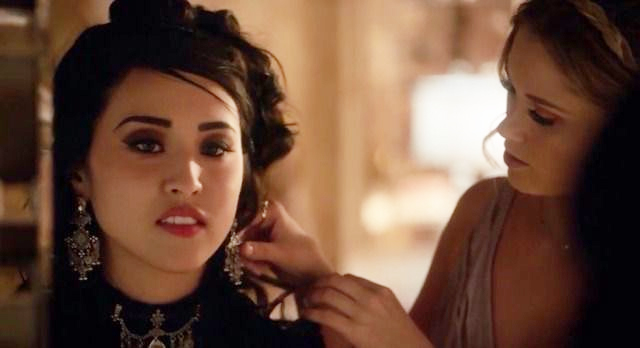 Karolina and Nico’s almost-moment burns brighter than the moment between Karolina and Chase. In fact, I’m blinded by the gay glow. And it’s frustrating to see the picture of Karolina and Chase leading the batch of press photos for the episode. That batch also includes two photos from the coffee shop scene: one of the full group and one of, yup you guessed it, JUST CHASE AND KAROLINA. Even though Karolina throws Nico a Very Significant Look in that scene and barely looks at Chase once!

Even Gert sees Karolina’s attraction to Nico after interrupting them in Karolina’s room. At the gala, she asks Karolina if she likes Nico, and while I’d like to believe her intentions are pure, Karolina seems to be right on the money when she accuses Gert of only asking for selfish reasons. The way Gert asks Karolina — so publicly and with little regard for any of the complicated feelings her friend might be experiencing — borders on cruel. Feeling called out and uncomfortable, Karolina lashes out against Gert (though noticeably does not deny any feelings toward Nico).

Jonah has fully risen and throws himself into Pride’s world, masquerading as a member of Leslie’s church and just barely concealing the fact that he’s her lover and Karolina’s birth father. In flashback, we learn that he’s the devil all the parents made a deal with years ago, the reason they’re all ensnared in a web of villainy. The gala becomes the setting for a fun heist led by Nico, Alex, and Gert.

Relationship drama and emotional character work are really at the forefront of “Metamorphosis,” giving stakes to all the plot developments. Tina explains to Nico that the staff is the product of advanced science (not, apparently, magic) and only responds to her touch, but the scene has more to do with the mother-daughter relationship, with Nico’s shifting perception of her mother than with the mechanics of the staff.

Robert and Janet’s affair comes to a head at the gala, where Victor announces in front of everyone that he knows all about it and then collapses as a result of his brain cancer. Watching Janet run to his side now that she knows he’s sick when we know that he has abused her repeatedly is devastating. Jonah fixes Victor up with some fancy medical treatment, and the teens end up walking away with more questions than answers about who their parents are and what’s happening.

It isn’t as action-packed of an episode as last week’s, but the focus on some of the show’s soapier elements has strong payoff. And now that Karolina’s feelings for Nico are at least out there in the universe — albeit put out there for the wrong reasons by Gert — #GayKarolinaWatch2017 finally has some real momentum. I just wish Hulu would recognize that.