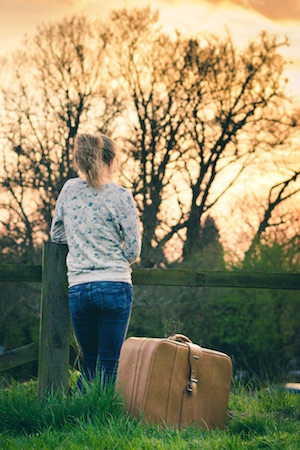 She asked me to marry her in the middle of the night, falling asleep as soon as the words took flight. Days later I asked are you sure and she said alright then and it was decided. We flew into a Canadian winter and stood on a cliff – the edge of the world – and promised to spend our lives making each other laugh. We chose a grey-haired, kind-eyed celebrant who told us she’d never seen two people smile so much during the ceremony and then promised to put our wedding certificate in the mail. When it came, we put the small brown paper with the Canadian emblem in the centre and both of our names typed in capital letters into a drawer.

Three years later we sat in a bus shelter that no longer met any buses and she said she was done and wanted out.  I gasped for air and grasped my elbows, afraid that my body would rip at the seams. She said, it’s just a piece of paper, Gem, and then quieter, I tried not to hurt you. For all of our joint bank accounts and shared wardrobes, for all our talk of travel and home loans, of potential babies – she was right, it was just a piece of paper, easily crumpled and lost with no consequence.

Australia’s refusal to enact marriage equality hurt the most in this moment. Before it ended, I was definitely and defiantly married, refusing to recognise the State’s authority over my relationship status. After, I don’t know what name to give myself. If not married, then what? While the symbolism of our Canadian marriage certificate seemed enough while we were together, there is no ceremony sufficient to undo what never really existed in the eyes of the law.

When I got married in 2012, I assumed that the Australian government would catch up quickly. After all, the law already afforded de-facto couples many of the same rights as married people and even Centrelink jumped at the chance to save some dough by recognising same-sex couples as couples rather than strangely close housemates. It seemed a small step to make and yet the government refused to budge.

The thing is, though, that not all relationships have equal access to reproductive assistance, custody rights or legal recognition and protection. The ways in which relationships are governed differs from state to state but the overwhelming reality for those of us in queer partnerships is that we are denied autonomy over our relationships. Other people, in positions of power, are given a say – the only say – in how we define, structure and practice love. The government assumes I am incapable of making hefty legal decisions about my relationships, whether I want to enter lifelong commitments or end them.

Going overseas to get married is terribly romantic, but if you need to end the marriage for whatever reason, difficulties abound. Australia will, of course, not grant you a divorce from a marriage it refuses to recognise. Unhelpfully, many of the countries that have legalised marriage equality won’t let you get divorced unless you can prove that you live there. This is the case in New Zealand, where at least one of you needs to prove residency before you can apply for a divorce.

In the UK, there are ways around the resident rule if you got married in the UK, but they are vague and complicated. In Canada, individual provinces and territories govern marriage laws so the rules around divorce are varied. In British Columbia, where my marriage certificate was issued, you can apply for a divorce as long as you live somewhere – like Australia – that won’t recognise your marriage. It’s complicated, though, and requires the help of someone who possesses a thorough understanding of legal forms. The dryness of all the legal jargon pertaining to overseas divorce proceedings is perhaps the best antidote to the whirlwind romance of eloping to the other side of the world.

Standing at Equal Love rallies for marriage equality and watching the news about the plebiscite, it’s hard not to feel like a bad example. Stories about men who have been together for fifty years and women who want to bring up children together are the focus here. We are supposed to see their stories and say see, we can do it too. The story, everyone says, is about love.

I understand why we take that tack. Equal love is a much better slogan than trying to argue that people and relationships are complicated and sometimes need legal sanctioning and protection and besides grown-ups should be allowed the autonomy to formalise their relationships in whichever ways they see fit. Love has a much better ring to it.

Once, I went to see one of my favourite feminist academics speak. She told this story about a girl carrying a big, full jug of water to the dinner table and her mother saying over and over, be careful. The girl trips over the edge of the rug and falls. The jug hits the slate floor and cracks into three distinct pieces of pottery. The mother hisses; I told you to be careful. She clucks, satisfied that her expectations have been fulfilled. The jug is broken and the girl is all the more ashamed for her mother’s warnings; I am all the more ashamed for the warnings of anti marriage equality conservatives.

It’s hard not to feel like a failure, like I’ve let the team down. For so long the state has argued that we couldn’t make marriage work; that we might be a threat to the sanctity of marriage. It’s hard to counter those arguments without feeling like we have to prove ourselves, like we have to work a lot harder and longer for much less recognition. When you do threaten the sanctity of marriage, by say, wanting to get divorced, it’s hard not to feel as though you’ve set the whole fight back.

Gemma Killen is a PhD Candidate in Gender Studies at the Australian National University. Her current work focuses on the ways in which queer women’s identities become embodied and are made meaningful in online spaces. In 2015, Gemma moved to Canberra from Adelaide where she wrote for the Adelaide University magazine OnDit. She was also published in Wet Ink, an Australian magazine for emergent creative writing. As a writer, Gemma wants to produce gender-focused work that is accessible and creative.

Gem has written 1 article for us.