We’re in a deeply unhealthy relationship with Killing Eve. I hope it never ends.

The season one finale left me with mixed feelings. Sure, I’d just witnessed one of the greatest, gayest TV seasons to ever air in the history of the medium. But I didn’t want more. I didn’t see how the show could continue and I didn’t want it to try. I wanted a neat one season masterpiece. I also happened to be in a very healthy three-year relationship.

But by the time season two arrived (without Phoebe Waller-Bridge no less!) I was ready and willing for anything. I also happened to be single.

Don’t worry. I know enough queer women in relationships to know there’s not a correlation between relationship status and Killing Eve fandom. But it is a requirement that you’re open to bullshit. Really hot, stunningly crafted bullshit. 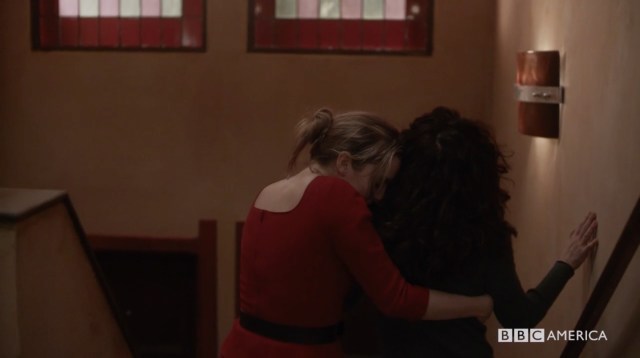 I bet her hair smells so good

A lot of the second season felt like fan fiction. It requires a healthy suspension of disbelief for the Eve and Villanelle of season one to pair up on a mission. But like the best fanfic writers, new showrunner Emerald Fennell grounded this fantasy storyline just enough to keep it feeling real. By making Eve’s continued descent into sociopathy the thrust of the season, her willingness to go along with Villanelle became thematic depth instead of simple wish fulfillment. And if at any point you doubted the involvement of MI6 in these schemes, the finale answered that by revealing it was all a set-up.

Eve’s relationship with Villanelle is our relationship with Villanelle. Every time she murders someone, Eve reacts with total shock. I do too. We’re all so stupid. Villanelle is an assassin! This is what she does! But there’s quite a difference between “I wish Villanelle would murder me” and how it would feel for Villanelle to actually murder any of us. The violence this season was especially brutal and that back and forth between Villanelle with her bad accents and amazing clothes (shoutout to new costume designer Charlotte Mitchell who might be the true star of the season) and Villanelle the killer was brought into horrifying contrast. It’s one thing to watch her kill some terrible man. It’s another to watch her snap the neck of a child or do God knows what to a woman whose only crime was crushing on her married coworker.

But oh how quickly we forget that last shock at the start of this finale. When Villanelle kills super villain Aaron Peele it’s so satisfying and the way she takes control of Eve during their escape is so fun. And while throat slitting may not be something most of us actually want, that slap across Eve’s face certainly fits within the realm of sexual normalcy. “You look cute by the way,” she says with that Villanelle smile and then we all died the good kind of death. 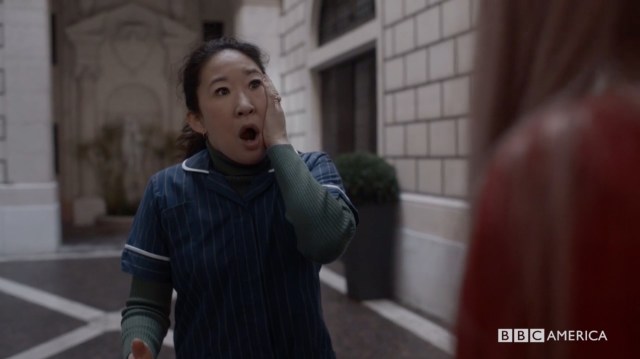 Better than them making out let’s be real

Between the nearly identical scenes of Carolyn warning Eve off Villanelle and Konstantin warning Villanelle off Eve, it really did feel like we were watching a tale of star-crossed lovers. Or even a romcom! With grand gestures and big feelings! Those grand gestures just happen to involve murder. And for the first time Eve gets to return the favor. It’s a brutal scene, messy, with an ax, but it’s hard not to feel as Villanelle does. Now that Eve has killed someone, she’s closer to Villanelle. Now that she’s closer to Villanelle, they can be together. But Eve comes to her senses before the rest of us. Because Eve has consequences. We do not. And consequences she receives.

I thought Eve was dead. This show has such a hold on me that I thought they killed off their lead, I thought they killed off SANDRA FUCKING OH, and I was still giddy with shock, excited for another season. Imagine, just a year ago, I thoughtfully didn’t want a season two. Now I quickly accepted Villanelle murdering her girlfriend with the amazing hair. That’s insane. I’m insane. Or maybe just horny. Either way, Eve is not dead. Sandra Oh is returning next season and while I have no idea what that will bring, I am, of course, relieved. Eve and Villanelle’s relationship is the show. And while I was willing to go wherever they wanted to take me, I’m very glad Eve is part of that plan. 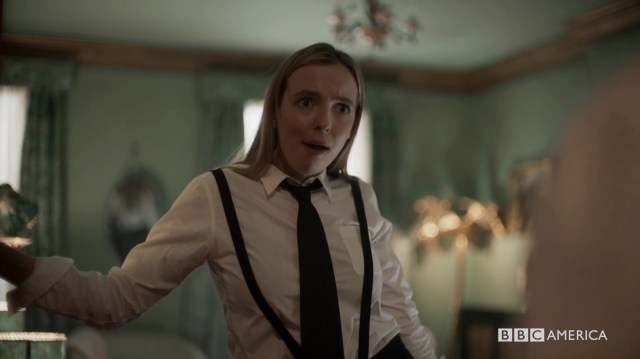 The season two finale came the closest the show ever has to giving us what we want. But what do we want? Do we want Eve and Villanelle to be together? To be Bonnie and Clyde? Go on a killing spree, cut a few throats, to quote Eve. Or be together peacefully? Villanelle reformed, going with Eve to the Farmer’s Market with their Golden/Bichon mix. Or do we really just want more of the same? More tension, more almosts. More outfits, more murder. Because what would happen if we caught the proverbial mail truck? It would be over. And what’s the fun in that?