Jane the Virgin is easily, consistently the most superlative show on television, a feat made even more impressive by the fact that it requires dozens of cogs to turn together to make it work. It’s an affectionate homage to the absurdity of telenovelas, boasting over-the-top personalities and improbable dilemmas. It’s an organized crime procedural. It’s a family drama (and an unapologetically Latino one with no white protagonist entry point, and enough earned pathos to melt even the Grinchiest heart). It’s a feminist go-getter series. It’s a comedy that delivers the smartest, most culturally relevant long game joke-writing since Arrested Development. And, right in the middle of it all, Jane the Virgin is a love story.

The first season and a half revolved around a love triangle between Jane Villanueva; her former fiancé, Michael Cordero; and the father of her baby, Rafael Solano. In this post-Twilight, post-Hunger Games world, many audiences have reached their breaking point with the who’s-she-gonna-choose narrative — but, exceptionally, Jane the Virgin‘s push-pull actually worked. Michael and Rafael are both good guys who sometimes do dubious things, motivated mostly out of their love for Jane. The way they’re written, it would make sense for her to marry either of them, actually, and there’s an emotional resonance in her inability to choose. After the midseaosn finale this year, though, Jane put the brakes on things with both of them.

In last night’s episode, “Chapter 33,” two exceptional things became apparent: One) Jane is moving on with someone who is neither Michael nor Rafael, and Two) The show is shifting its love triangle in a queer direction. 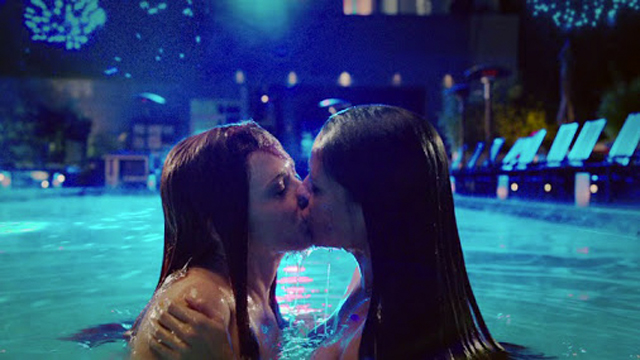 If you’ve never seen Jane the Virgin, listen closely; it’s going to get complicated: Dr. Luisa Alver— who accidentally artificially inseminated Jane with her half-brother, Rafael’s, sperm in the pilot episode — had a long relationship with a woman named Rose, who also was her step-mother (and, it turns out, the crime lord Sin Rostro, who ultimately ended up murdering Luisa’s dad by burying him in wet cement). While following Sin Rostro’s trail, Detective Susanna Barnett discovered that Rose is actually the step-daughter of Elena Di Nola, who was married to Emilio Solano before Rose was (and who was also the infamous Miami crime lord Mutter). So Luisa’s first step-mom was also the step-mom of Luisa’s second step-mom, who was also Luisa’s lover.

In the last few episodes, Luisa and Susana have developed a real romance, so now Luisa’s caught between the criminal mastermind and the detective who’s chasing her down.

In the first season of Jane the Virgin, Luisa was used for comic relief more than anything else, but one of this writers room’s greatest strengths is rounding out one-dimensional characters. Rafael’s first wife, Petra, for example, could easily be a cartoon villain, but the show has worked hard this season to fill in her back story and anchor her misdeeds in believable helplessness and trauma, making her a sympathetic character who makes bad decisions for complicated reasons. Similarly, this season we’ve watched Luisa’s journey to find out what happened to her real mom, and we’ve seen her struggle to banish her obsession with Rose, and we’ve witnessed the tender, blossoming affection between her and Susanna. 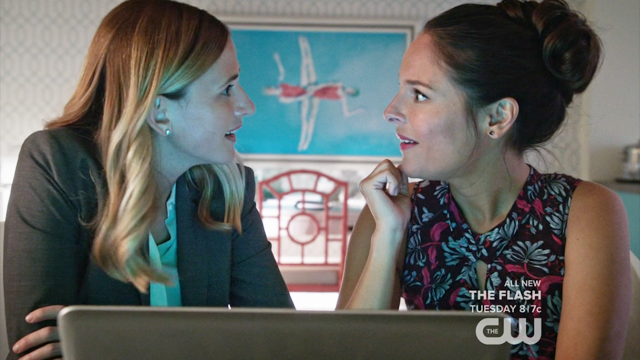 Please note the scissoring dancers in the background.

At first, it seemed as if it was going to be a one-sided affair. Susanna needed Luisa’s help to continue her investigation of Sin Rostro, so she gently stoked the flame of Luisa’s crush on her. Michael, Susana’s police partner, teased her about it, repeatedly calling Luisa her wife and girlfriend, but Susanna shrugged it off. She is unflappable! At least she was, until two weeks ago when she shared a surprising kiss with Luisa. This week, we found out that Susanna and Luisa are now seeing each other on the sly.

Well, again, they were  — until Susanna listened in on a conversation Luisa had with Rose’s former limo driver, in which she declared her undying love for Rose in an effort to get Rose to reach out to her so Susanna can arrest her. Near the end of the episode, Susanna arrived at Luisa’s apartment to tell her she can’t pursue anything with her because she knows she’s still hung up on Rose. And at the very end of the episode, Rose, who has been missing for almost a year, returned to our TVs, alive and well ready to make the trip back to Miami.

Lesbian and bisexual TV representation has made huge strides over the last few years, but even though we’re seeing a greater quantity of characters, we’re not necessarily seeing huge progress in the quality of stories being told. For the most part, queer women who share intimate moments are filmed from a distance, or in the dark, or with their hair obscuring their mouths. Editors cut away from them almost as soon as their lips lock. They kiss with their mouths closed. And they are hardly ever used as emotional anchors for the wider audience. Jane the Virgin seems to be setting up Luisa’s Choice as the central romantic conundrum of the back half of this season, and it has done so by letting the camera linger on longing looks against a backdrop of sweeping romantic music peppered with sharp, sweet dialogue and passionate kisses. You know, the same way they’ve shown us Jane’ Choice. 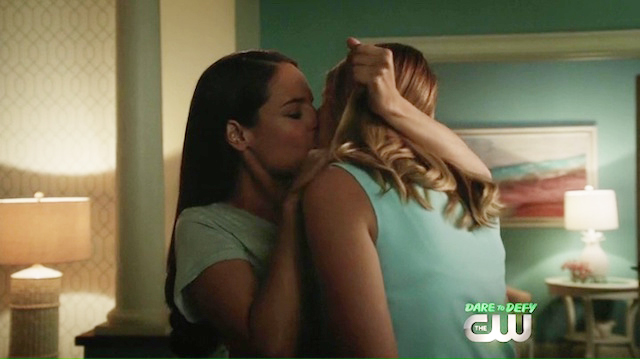 Lesbians on TV: Kissing with the lights on since … yesterday, basically.

In addition to all the other genres Jane the Virgin borrows from, the ones I mentioned above, there’s another one that’s central to this show’s DNA: The classic romance novel. In fact, Jane’s career goal is to be a famous romance writer. Her professors are always encouraging her to dig deeper into clichés and flip them on their head, to find new ways to tell the oldest story, and to appeal to her audience’s head and heart.

It became obvious near the midway point of season one that Jane the Virgin couldn’t sustain its Rafael-Jane-Michael love triangle much longer. The show did it well, but there are only so many stops and starts an audience can take before fatigue sets in. Unfortunately most writers rooms (and the networks/studios that often dictate to them) are usually unwilling to forgo proven ratings catnip in favor of good storytelling. That Jane the Virgin‘s writers did it is remarkable; that they chose to center the new love triangle on three women is revolutionary. It’s almost like they’re teaching Jane by example.

Join A+
Related:jane the virgin