The sexist, racist, xenophobic, homophobic and ableist rhetoric that has come to define the Trump administration has reignited the movement behind the Equal Rights Amendment (ERA), which was first introduced in 1923, but stalled in 1982 and currently remains three states away from ratification. Led by Lina Esco, founder of the Free the Nipple movement, The Human Campaign has launched a rigorous 24-month campaign to pass the amendment, soliciting help from Washington lobbyists and celebrities, and promising disruptive protests to gain public attention and support. However, nearly 100 years after its first authoring, it’s unclear whether the ERA in its current form truly supports equal rights for all gender identities.

Surprisingly, the ERA had the support of both political parties when it was first introduced to Congress in 1923 by suffragist and women’s rights activist Alice Paul. The original language of the amendment was that “Men and women shall have equal rights throughout the United States and every place subject to its jurisdiction,” but Paul rewrote the ERA in 1943 to say “Equality of rights under the law shall not be denied or abridged by the United States or by any state on account of sex.” It was this version that was eventually passed the U.S. Senate and then the House of Representatives, and on March 22, 1972, was sent to the states for ratification. By 1977, the amendment had received 35 of the necessary 38 state ratifications. In 1978, a joint resolution of Congress extended the ratification deadline to June 30, 1982. 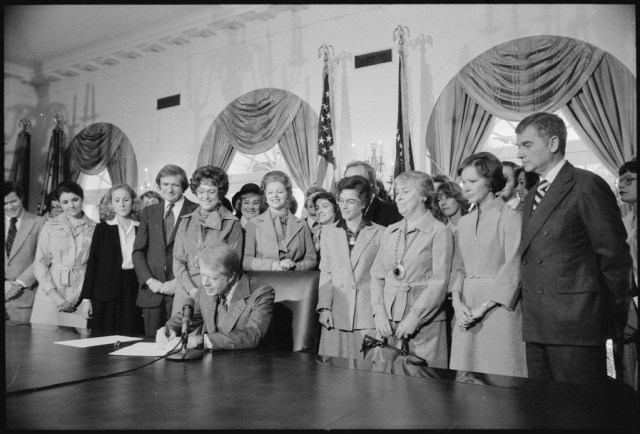 Conservative Republican activist Phyllis Schlafly led the charge against the ERA, arguing for traditional gender roles and alleging that the amendment would repeal protective laws such as alimony and make it difficult for mothers to obtain custody of their children in divorce cases. Schlafly, and others who opposed the ERA, claimed that single-sex bathrooms would be eliminated and that women would be required to enlist in the draft. Their propaganda worked, and in 1980 the Republican party removed support for the ERA from their platform.

After the extended 1982 deadline came and went, the fight to add the ERA as the 27th Amendment to the U.S. Constitution was delayed indefinitely, though it’s been introduced before every session of Congress since. Esco began her campaign to get the ERA ratified during the Obama administration, but found little support on Capitol Hill. It was the election of Donald Trump that lit a new fire under activists’ asses, and in an interview with Mic, Esco said, “Everybody was in survival mode, like, ‘What can I do?’ Everybody was on edge. So there’s no better time to try to get the Equal Rights Amendment in the Constitution than right now.”

Perhaps it was that frustration that led Nevada’s democratic-controlled State Senate to finally pass the ERA on Wednesday, March 15. The amendment is expected to pass through the State Assembly as well, which will make Nevada the 36th state to ratify. However, Democrats and Republicans alike still question the efficacy of the amendment and argue that the same protections are currently offered under the 14th Amendment. Ironically enough, late Associate Justice Antonin Scalia disagreed with that argument, once stating that “The Constitution does not protect women from sexual discrimination. No one ever thought that’s what it meant. No one ever voted for that.”

While we’re on the topic of the Supreme Court, it’s important to consider the consequences of putting gender equality issues in the hands of nine Supreme Court Justices, particularly under a Trump presidency. There’s also the issue of the ERA’s long expired deadline, which conservatives will no doubt argue makes the amendment invalid. The “Madison Amendment,” which became the 27th amendment in 1992, 203 years after it was first introduced, offers some hope that Congress has the power to uphold the ERA should it meet the 38 state qualification.

The Human Campaign’s 24-month crusade is ambitious, but if feminist activists continue stepping up, it just might work. Millions of people around the world participated in the Women’s March on the day after Trump’s inauguration, and on March 8th rallies erupted across the country for International Women’s Day. With public engagement reaching an all-time high, it’s likely that progressives will put their weight behind the ERA and push the remaining states to ratify. The ERA has the potential to address issues such as disparities in pay, sex discrimination cases, sexual assault, unequal access to health care, poverty, and paid maternity leave, but it remains to be seen whether it will go far enough to secure equality for all.

The language on The Human Campaign’s website speaks only of recognizing women and men as equals and does not mention how trans and gender nonconforming people will be supported by the amendment. It vaguely mentions partnerships with “gender equality” (quotes are theirs, not mine) organizations, but doesn’t provide additional information. Given the escalating violence against trans communities and the fact that the Trump administration has already rescinded Obama’s protections for trans students in public schools, the oversight is impossible to ignore. It makes one wonder whether The Human Campaign’s organizers purposefully included binary language in order to speed their movement along and garner more widespread support.

For now, the answer is: we’ll see. We’ll see whether Nevada becomes the 36th state to ratify the ERA. We’ll see how The Human Campaign unfolds and who their “gender equality” partners turn out to be. We’ll see how the public responds to this movement and whether they demand the amendment be changed to reflect our expanded views on gender.

The renewed fight behind the ERA stems from an admirable intention, but as we all know, impact outweighs intention, and it’s still unclear what the impact will be.