Horizon Zero Dawn, the 2017 action role-playing game that introduced the world to post-post-apocalyptic robot-slaying hero Aloy (voiced by Ashly Burch), has one of my favorite lesbian moments in gaming history. As Aloy makes her way through the world, she finds dozens of datapoints that offer clues about how human civilization ended a thousand years ago. There are holograms, audio recordings, digital newspaper clippings, press releases, advertisements, and, of course, emails. The datapoints get bleaker and bleaker the further Aloy travels: The Old World was literally being eaten alive by a swarm of killer robots. Then, two-thirds of the way through the game, Aloy stumbles across a message between two women who were breaking up because one of them sent the other a stuffed armadillo as an apology, with a note that said “I’m sorry, hon. Arma dilling with some personal issues.” Theresa hated the pun so bad she dumped Sera. It’s so mean and ridiculous, such an absurd respite from the carnage.

Guerrilla Games recently released the sequel to their 2017 smash hit, and Horizon Forbidden West has even more to love when it comes to LGBTQ+ characters. There’s a Tenakth trans woman warrior named Wekatta who gently corrects Aloy when she uses the word “crazy”; Wekatta says everyone called her crazy when she started wearing women’s armor, and now she is celebrated among her people. There’s a trans guy warrior named Janeva who has to remind his fellow soldier to stop calling him “sister.” There’s a Quen warrior with a girlfriend waiting back home, several men with husbands or boyfriends, and new datapoints that even include a non-binary character. 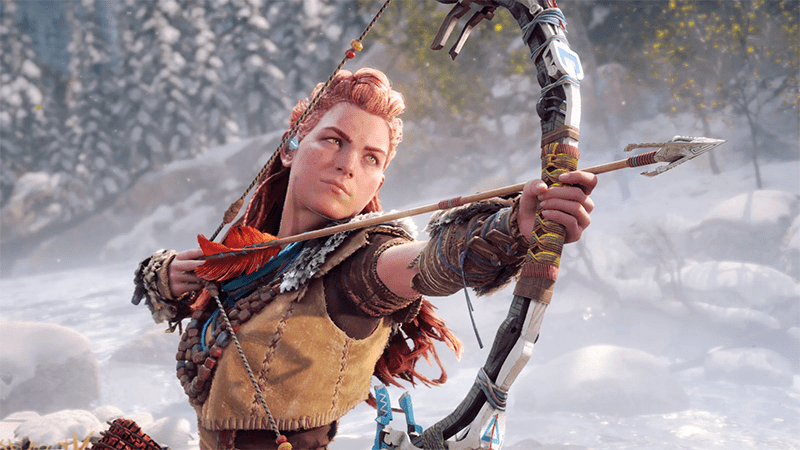 As much as I loved coming across all my people in one of my favorite game series, nothing could have prepared me for the enormous gayness of the final reveal. As it turns out, not all the Old Ones were wiped out by the Faro Plague like we thought in Horizon Zero Dawn. A bunch of rich assholes called Far Zenith escaped earth on a spaceship and basically turned themselves immortal. Among them is an art collector named Tilda. She says she wants to help Aloy and her pals bring down Far Zenith, who have returned to earth to destroy it again — but after Aloy disposes of all the Far Zenith goons, Tilda reveals her true plan. She has come to earth to kidnap Aloy to take her to space so they can make a whole new world together. Because Tilda was in love — and in a relationship??? — with Elizabet Sobek, the scientist who saved the planet and created the artificial intelligence that rebirthed life on earth.

Tilda left Elizabet on a dying planet and has been pining over her for a whole entire millennium from outer space, so she concocts an elaborate timey-wimey scheme to eradicate two civilizations to kidnap Elizabet’s clone so she can turn her immortal too, and they can live together for eternity. “You’ll forgive me in a few thousand years,” Tilda says after she drops her big gay bomb on Aloy. It’s so good, and Carrie Anne-Moss is so great in the role, I almost didn’t want to fight her. I could have listened to her give me a tour of her museum of ancient relics all day. Alas, she threatened my seestra, so she had to go. 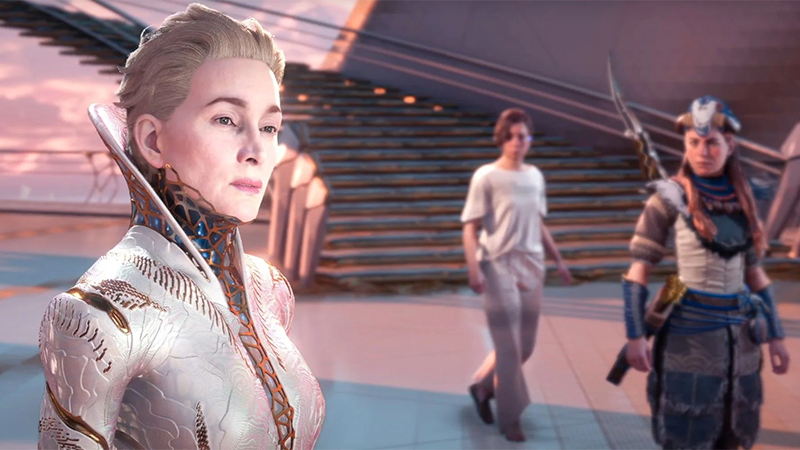 What I especially love about all the romances in Horizon Forbidden West is that, just like in the first game, Aloy is completely unfazed by the concept, personally. Not just Tilda’s bananas ideas, but Aloy doesn’t flirt with, long for, or chase after anyone romantically. When you choose for her to follow her heart in the dialogue option screen — as opposed to following her logic or using her fists — what you get is compassion and empathy, not sexual advances like in basically all other games. Aloy doesn’t say she’s aromantic and/or asexual, but it’s very easy to read her that way. Which is even more refreshing than all the casual NPC gayness!

Horizon Forbidden West is not a perfect game. It struggles with the same Native American appropriation as its predecessor, which is baked into the world at this point. It’s got a serious white savior problem. The POC characters from Meridian, the city Aloy fought for at the end of Horizon Zero Dawn, literally keep calling her “savior.” It’s mind-boggling that detail made it through so many layers of Guerrilla Games’ employees to land in the final version of the game. It almost made me cringe out of my skin. Luckily the “savior” thing stops as Aloy moves further west and her deeds are less known. People go back to calling her “outlander” and “fire-hair.”

Colorism is also a real problem in Forbidden West. The earth-bound big bad is a Black woman (voiced by Angela Bassett) who’s seeking vengeance for the wholesale slaughter of her people, and who only finds redemption by sacrificing herself so Aloy can continue her quest to save the world. The ally that Aloy makes from the Quen tribe, which is, I think, meant to be Hawaii (update: apparently the Quen are actually from China!), is white too (and voiced by white actress Alison Jaye), while other Quen with less prominent roles have darker skin tones. And Varl, the Black man in Aloy’s found family, also dies. The only Black character in Aloy’s found family who makes it out alive has a much lighter skin tone. (I’m not counting Sylens as part of Aloy’s family… yet.) 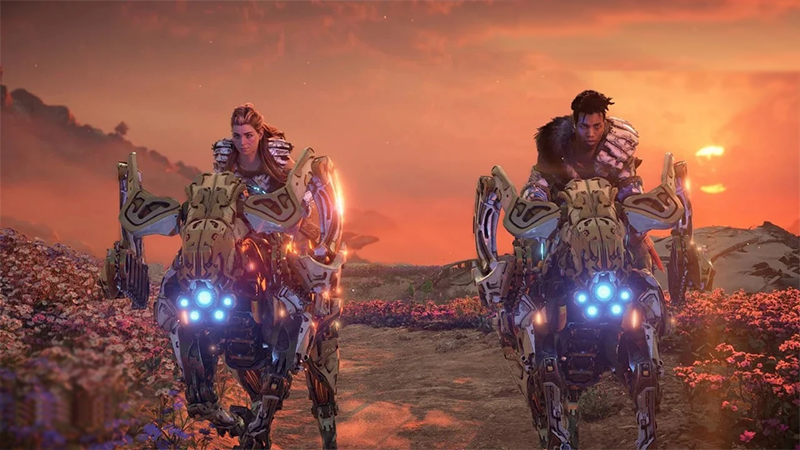 On the other hand, there’s loads of heroic POC NPCs with fully realized stories; there’s multiple positive examples of disability rep (including my boy Kotallo, who is one of my favorite men ever); and there’s so many badass middle-age and grandma-age women warriors. At one point, a woman in her 70s went sprinting by me as we ran toward her quest meet-up point, and at another point, Kotallo, with one arm, out-climbed me. I loved it.

There’s plenty to critique and also plenty to love about this game.

I’ll leave all the combat and frame-rate and nerfed stats criticism to other reviewers. Playing Forbidden West was fun as heck to me, even more fun than the original, with some super cool new weapons, including a shredder gauntlet that’s like playing catch with lightning. And it’s stunning, visually. Legitimately breathtaking in parts. But mostly the story warmed my heart, filled me with hope, and made my apocalyptic dyke drama dreams come true.