What if Trump never leaves office? If he consolidates power, wields the military to take over the government, and institutes martial law? I know it’s alarmist, but I think queer and trans people have earned the right to alarmism. Could he shut down the grid? What if someone he or his predecessors has radicalized decides it’s time to jump off World War III? Many of us are entirely reliant on the internet for everything. Could you survive more than a day or two without all of the comforts of technology?

A growing number of queer and trans people are embracing survivalism, or “doomsday prep,” for this reason. Or, you know, there could be a zombie apocalypse. Or peak oil! Either way it’s not a good idea to be wholly reliant on things that only exist because an entire network of corporations and governments allow us to have access to them. They could all disappear in an instant. We may have to go make queer communes in the mountains or something! We need more survival skills!

Much more likely is getting lost, hurt, or stranded on a hike. What do you do if that happens? Some of your loved ones might be bringing nothing but water and maybe another layer of clothing with them on a hike, if that — which can be dangerous if there’s an emergency! That’s the point of view of REI, who want everyone to enjoy the outdoors safely. That’s why they put on super cool basic wilderness survival classes, like the one I recently took to brush up on my skills. A pleasant surprise was, in addition to myself and my partner, the other two participants in the training were also a lesbian couple. I think survival skills are pretty gay!

Do you have friends or family who are similarly fatalistic, or are too reliant on the comforts of late stage capitalism? Have a queer survivalist friend who needs some new gear to round out their “get up and go” kit? Or a friend who just likes hiking and/or being outdoors but isn’t sufficiently prepared for the possibility of something going wrong? Here’s are a bunch of items that would make perfect gifts for that person. 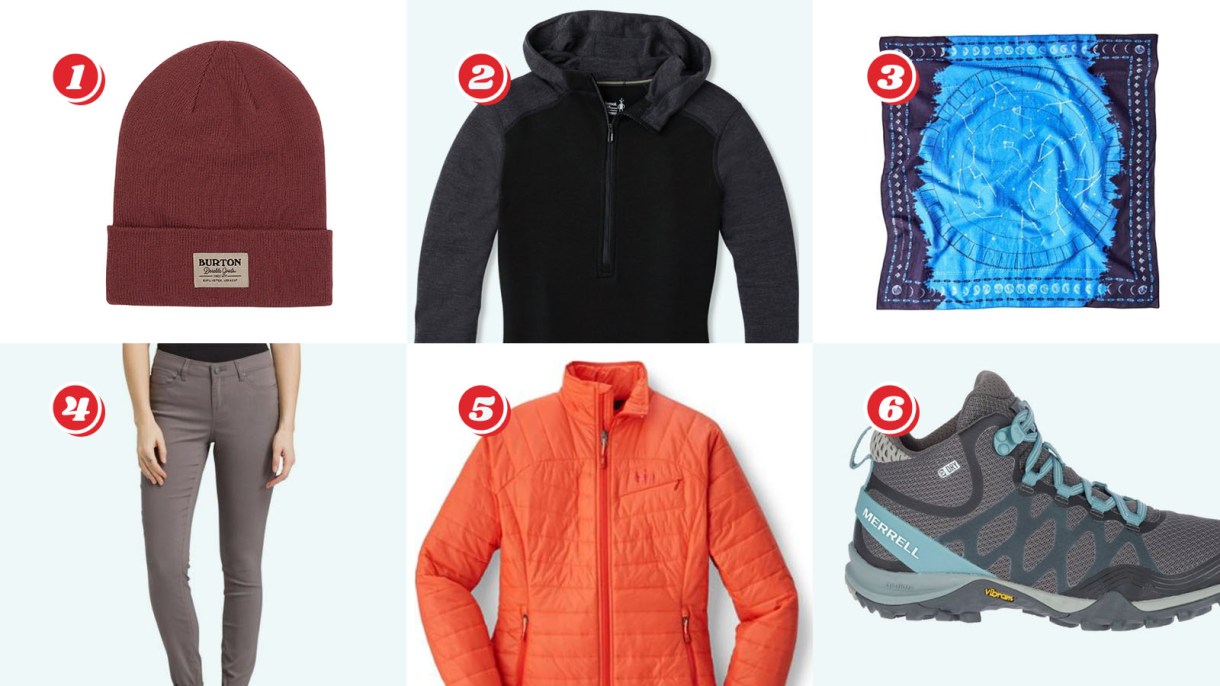 Staying warm is essential if you veer off-trail and get lost. This beanie’s extra long, so it’ll stay put if they have long hair! One thing I learned about survival is that wool is king, especially for a base layer. Cotton absorbs water and loses its insulating properties, so if they get caught in the rain, they’re gonna freeze. Wool/synthetic socks and base layers are good, cotton is bad! Smartwool, like in this base layer hoodie, is super soft and comfy, but will keep you warm even if you get wet. These hiking pants are also made of synthetics, not cotton, so they’ll do the same! They even come in tall sizes (potentially good for the trans women in your life).

After a base layer, they’ll need an insulating layer. What’s super cool about this puffer jacket is it can pack up and zip into its own pocket so it takes up very little space! After that, you need a “shell,” or water/windproof layer — a puffer jacket, though, can sometimes do double duty if the weather’s not too intense. Will the stars on this bandana help them with nighttime navigation? Probably not. But a bandana is essential. If it’s hot, they can get it wet and put it on their head or neck. If it’s cold, they can wrap it around their cold parts. In a pinch, it can be used to keep pressure on a wound!

Finally, hiking is way more enjoyable in hiking boots (rather than, say, flimsy, worn out running shoes). The firm sole keeps them safe from sharp rocks and on the trail with its good grip, and they are waterproof! Super important if they get caught in the rain, for example, or have to stay out longer than they thought – running shoes will get uncomfortable real quick in an emergency situation. 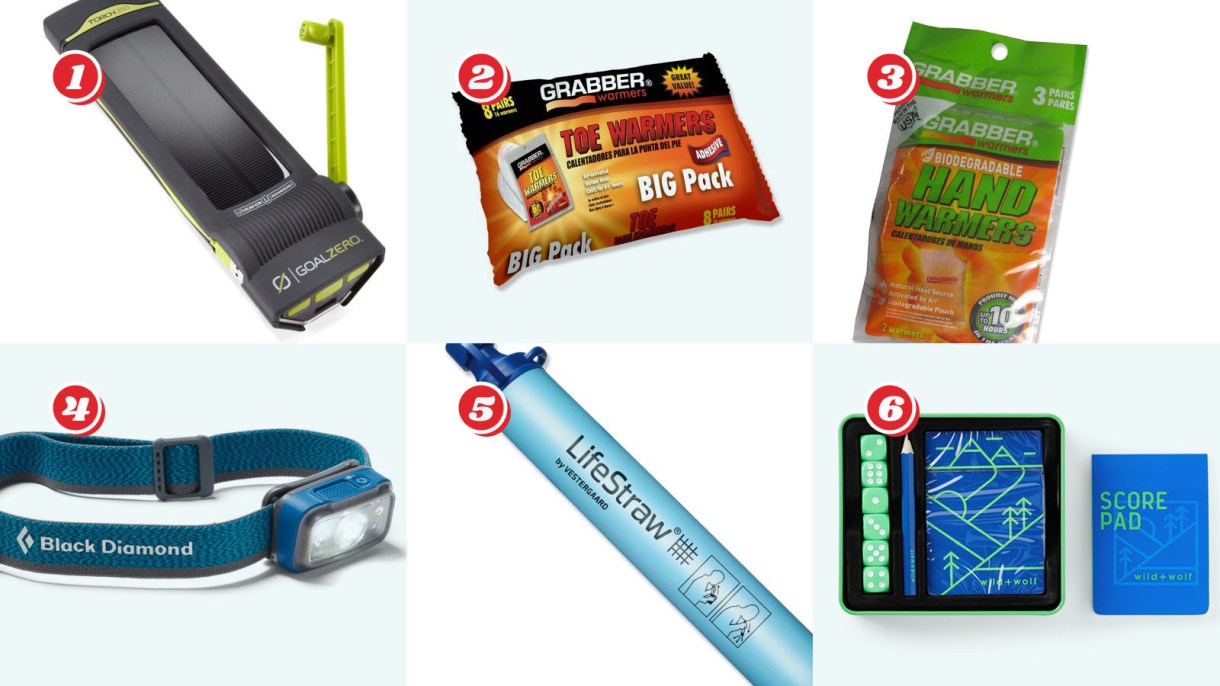 If you want to survive, some technology will be helpful. But you want to gift things that don’t require batteries or electricity, because those run out (the head lamp suggested does use AAA batteries, maybe throw a pair of those in too). This solar/crank powered flashlight and charger is clutch because they can charge their phone and have light — and it will always have juice. You also want them to keep warm, especially if they have to stay out overnight without camp gear (because they didn’t plan to get lost)! Hand warmers and Toe Warmers make it so extremities won’t fall off due to hypothermia. You wouldn’t want that, right? Both of them can function as a heat source under an emergency blanket as well — not just for hands/toes!

If they get caught out, lost, and the sun’s going down? Having a flashlight might be the difference between finding their way back to the car or having to sleep in the wilderness. A head lamp allows them to still use their hands while also seeing. I learned in my class that a human can survive approximately three WEEKS without food, but only three days without water. This LifeStraw isn’t the most comprehensive water filter there is, but it’s easy to throw in a hiking bag just in case. Now, if they had to unexpectedly make camp and are now just waiting until a hopeful morning rescue, why not pass the time with some games? This card and game set is waterproof so they can have a little bit of fun while awaiting rescue or the nuclear winter outside their bunker to subside. If they throw these basic gadgets in their bag you’ll have warmth, light, water, and entertainment! See the next section, though, for how you can help them take their emergency/survival packing to the next level. 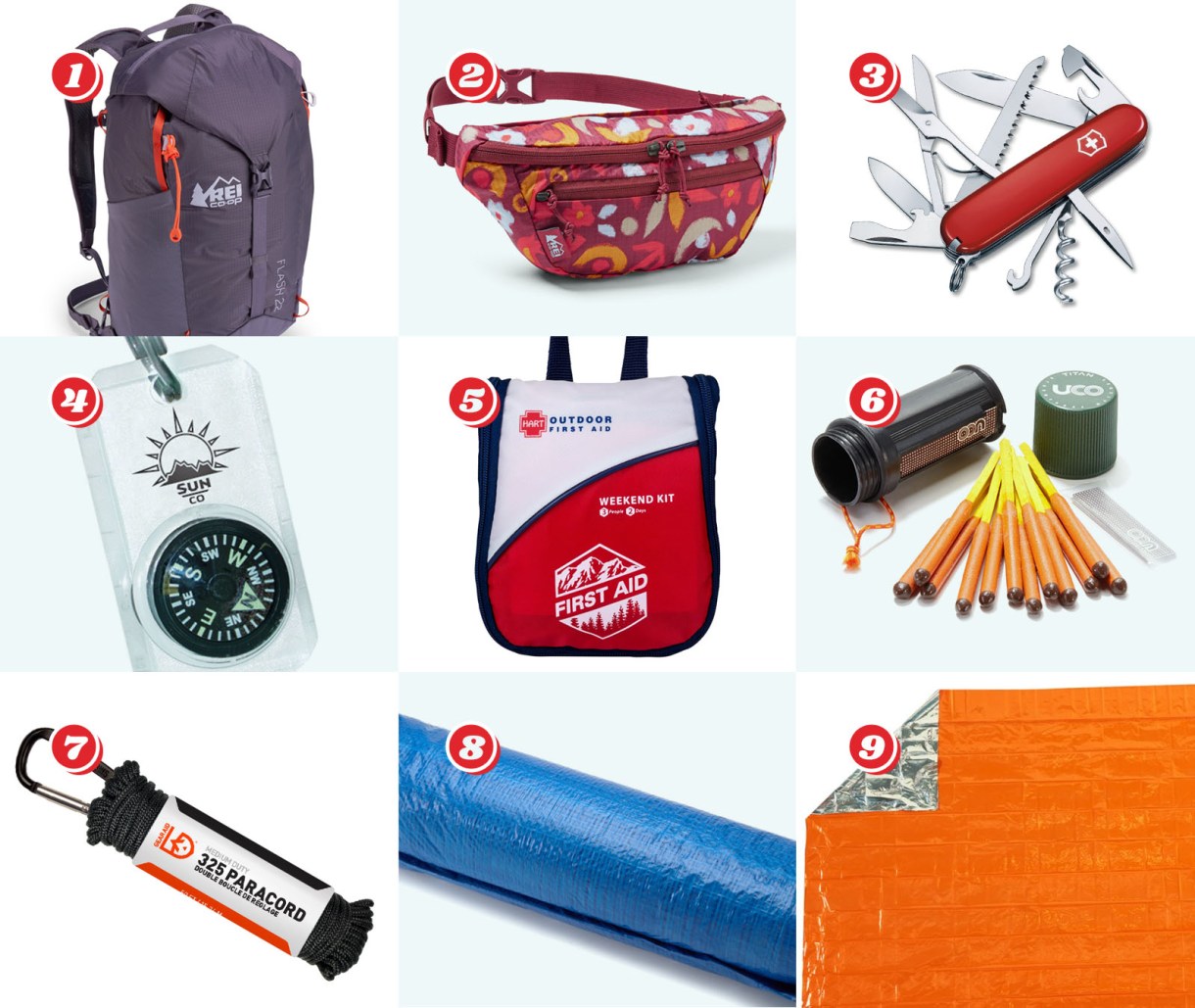 Here are the basics for making sure they make it through the night if they accidentally get caught out, or need all of the essentials so they can jam at a moment’s notice. Nearly everything in this gift guide will fit in a day pack like this one, and it has space for a water bladder, which is convenient! A fanny pack adds a little more storage, like for a phone (and fanny packs are back in, if you didn’t know)! At the wilderness class, I learned how to create three different types of shelter using just this kind of tarp and ParaCord, and it was much easier than I thought! If they have a pocket knife and can find some dry sticks, making a fire is relatively easy with a basic lighter (but waterproof matches never run out of fuel). If they can’t, the emergency blanket will keep them warm in a pinch. This first aid kit is small enough to throw in a pack, and has the basics for cleaning and covering minor wounds, scrapes, and blisters.

A compass isn’t super useful unless they know how to read it, but maybe you can link them to that video if you give them a compass! If you just bought everything in this section, for under $150 your friend who runs a weekly queer hike could basically have all they need to stay alive if they ever get lost when they go solo! 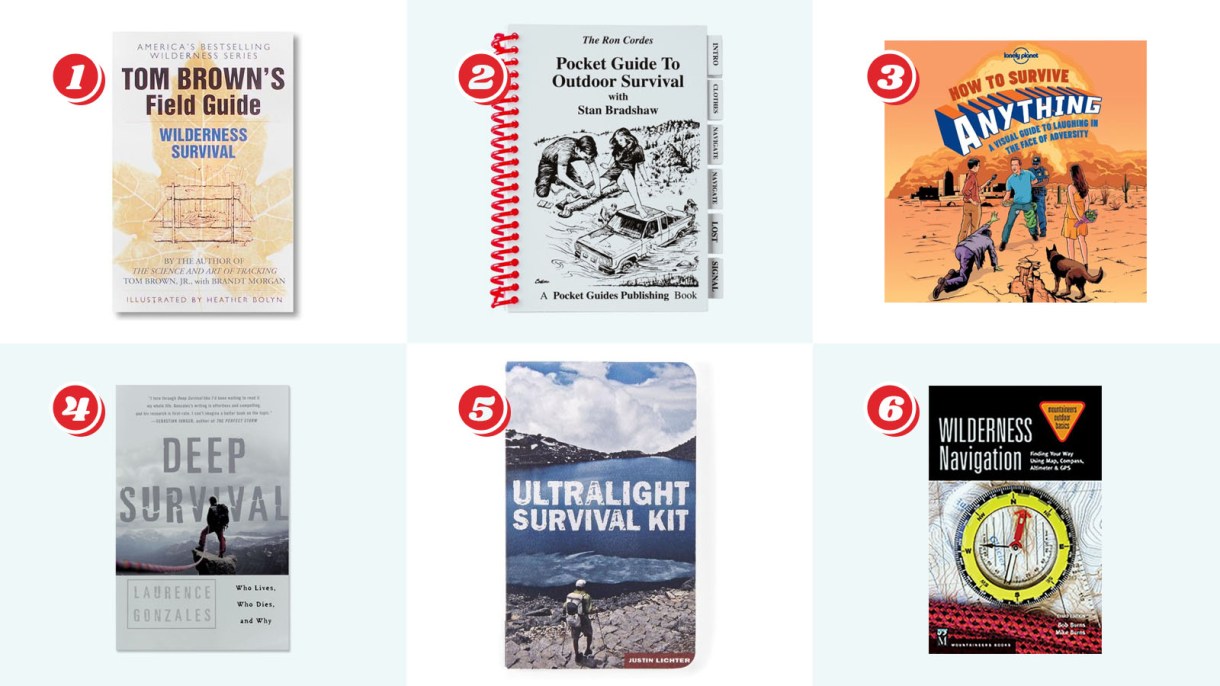 Tom Brown’s Field Guide To Wilderness Survival is a classic, in-depth look at wilderness survival skills, like making shelter, finding water, identifying edible plants, and even stalking and killing animals for food. It’s definitely for someone looking to really get into survivalism. The Pocket Guide, on the other hand, is for throwing into a pack and covers basic, “common sense,” frequently-encountered issues. The Ultralight Survival Kit book is more geared to backpackers who don’t want to carry too much, and the Wilderness Navigation guide will teach them how to read a compass, topographical map, the sun, and even the GPS on a phone to get them from point A to point B (or point I Don’t Know back to point A).

How To Survive Anything is for anyone worried that the “big one,” whatever that is, is coming and they need to be prepared. It provides information for how to survive earthquakes, avalanches, a free-falling elevator, a zombie apocalypse… as well as a bachelorette party and bumping into an ex, so it covers the gamut of life-or-death situations. Deep Survival is more philosophical, getting into why some people are “survivors” and some aren’t, so it’s maybe some mental prep for your friend’s next major wilderness preparation outing, or a good book club read for their queer survivalist meet up group.

Keep your loved ones alive! Who knows what’s coming? One of the worst things capitalism and colonialism have taken from us are the ancestral skills of living in harmony with nature. We’re so isolated from the Earth that if we were forced to rely on it to survive, we wouldn’t be able to! Even though it has everything we need. Luckily, there’s a middle ground between “primitive” living and tech-saturated modernism. With some of the items on this list, your outdoorsy friend will be safe and your survivalist friend will be even more prepared for the eventual end of society as we know it, which may or may not be coming!