Be our guest for Happy Hour at Home, a small series about the joys of lesbian socializing from home, because let’s be honest with ourselves — we’re going to be here for a while.

REMEMBER SOUNDS? I remember so many sounds, and I miss them. Everything is just the same, same, same now. I keep joking that I’m watching more Bravo than ever just because the sound of large groups yelling over each other reminds me of busy happy hours at bars, but I think it might be true.

There are so many soundscapes I miss: busy bars, industrial-chic restaurants with their shitty ass acoustics, people ordering overly customized coffee drinks, servers listing specials. I miss noise. I think I even miss the awkward pitter-patter of small talk!!!!!

I definitely miss the soundscape of the beach. I’m quarantined in the desert, and the last real beach day I had was almost exactly a year ago when I flew to Florida to spend a long weekend with someone I’d only spent a handful of nights in a hotel with. At the beach, there was a balcony. On that balcony, we ate avocado with lemon juice and had mimosas with our coffee. The sun was Florida-hot (a heat that was new to me) and I sweat through my half-unbuttoned floral shirt. There were lots of good tastes and touches on that balcony, but right now I can’t stop thinking about the sounds. Breezy trees and birds that were also new to me and crashing waves and the people partying down below, ocean-front tailgating in cars that track-marked the sand. The day got noisier as it got hotter. Everything was very, very alive and loud. A good kind of bustling.

To make an indoor beach, simulate the sounds of one. Did you know there are hours and hours of beach footage on YouTube? I did not! They’re meant for meditations and for helping people sleep, and they can turn your living room into a pretty believable beach. There are nighttime ones, daytime ones, ones with more dramatic waves, ones with softer sounds, with birds, with crackling beachside bonfires. This is your beach, so make it sound however you like.

2. Fill a Cup with Crushed Ice

Why does everything taste better with crushed ice?

We made a fake gay bar for our simulated beach day. We called it Sailor Jane’s, because I like to imagine a dyke named Jane slinging Mai Tais at an outdoor bar somewhere. Rejected names for our beachside bar include Seas The Day and Shell Yeah.

All you need for tiki-style drinks is rum and citrus, really. At Sailor Jane’s, I had to do a decent amount of improvising. I don’t have a blender here, so I made crushed ice piña coladas with rum, unsweetened vanilla coconut milk, pineapple juice, and a few dollops of canned coconut cream that I’ve been keeping in the fridge and occasionally mix into my coffee (highly recommend). We don’t have Orgeat or curaçao, but I similarly faked a Mai Tai with rum, fresh-squeezed orange juice, triple sec, lime juice, and almond extract.

Did my piña coladas and Mai Tais taste like the ones I’ve sipped on the beach before? Not exactly! Unsurprisingly, a simulacrum of a beach day is… a simulacrum of a beach day. It’s never going to be exactly the same, but it’s still fun, another way to differentiate the days, which I guess has become the entire point of this Happy Hour At Home series. Making space for nice, comforting, fun things that don’t perfectly replicate socializing out in the world but evoke at least some small parts of it. 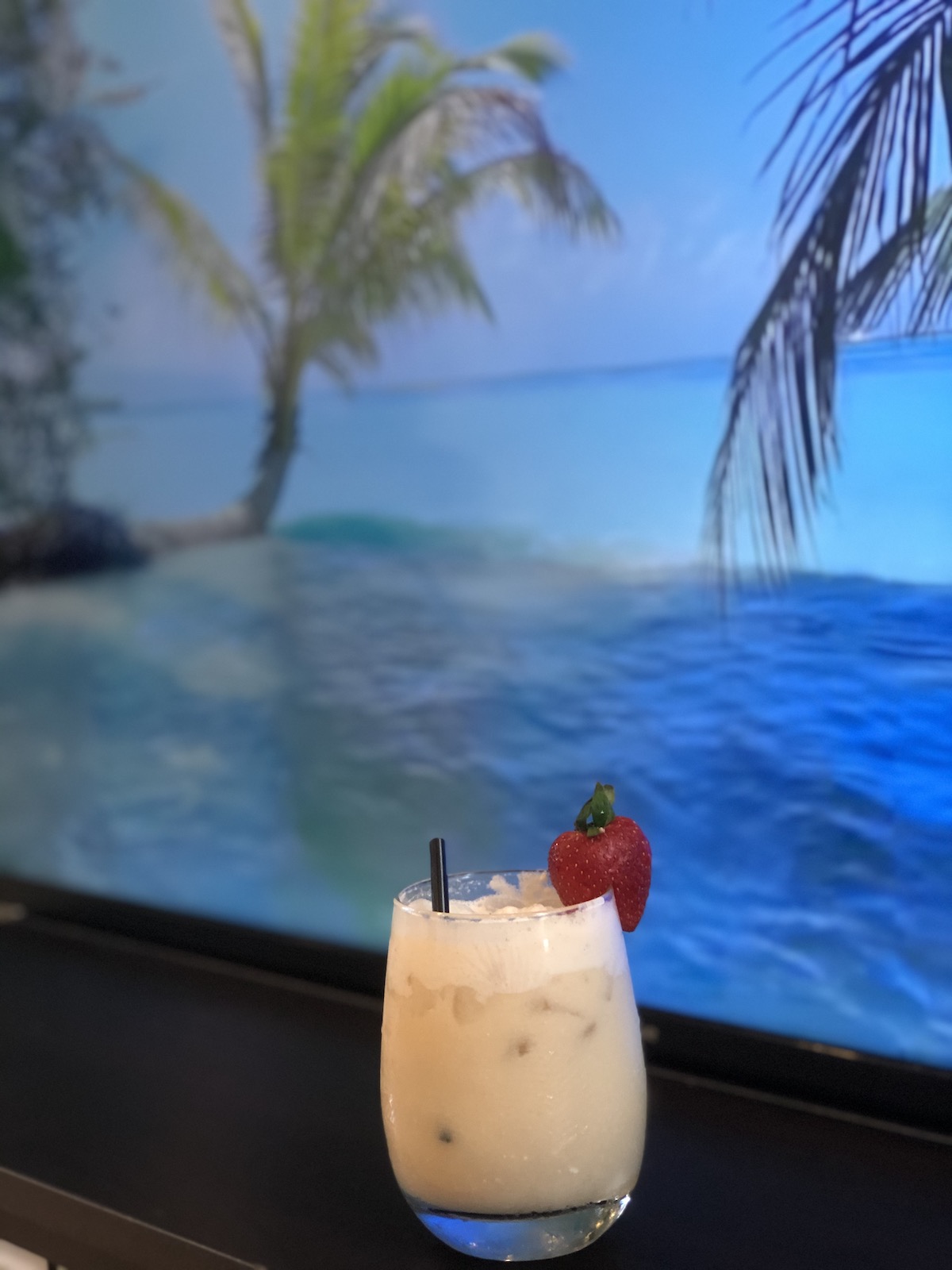 The drinks were still good, in large part thanks to crushed ice. You can crush ice by putting it in a ziploc or wrapped in a tea towel and banging it with a rolling pin. You can also use a blender or food processor, but the banging is better for dramatic effect. Other beach day drinks that taste better with crushed ice: coke, lemonade, sweet tea, ginger beer, seltzer.

Get your beach snacks, too. Pineapple or mango slices sprinkled with tajín. Just a straight up bag of chips. Pickle spears are an underrated beach snack. The good news about a faked beach is that you don’t have to worry about eating sand or things melting in the sun.

You gotta dress the part! Wear a swimsuit inside. Wear a flowy cover-up. Wear shorts and a tank top, even if it’s cold outside. It’s your indoor beach, bitch! Who cares what the weather’s like outside? Personally, I have taken to wearing a bikini top in my own home, even when my girlfriend and I aren’t pretending to be on a beach, and you know what? I recommend it.

You’ve got a fake beach on the television and cold drinks and snacks, and now it’s time to just lay on a towel on the floor or, like I did, stretch out on the couch and take a nap. A fake beach day absolutely calls for a real nap.

Kayla has written 341 articles for us.