The inauguration of 45 filled me with dread, despair and helplessness. The obstacles felt insurmountable, and I laid in bed with the worst cramps I’ve had since I was a teenager. It was a coincidence that I started to read How To Survive A Plague: The Inside Story of How Citizens and Science Tamed AIDS by David France. My mom, the sister of an AIDS victim, gave me the book for Christmas. She always tells me how much my uncle Adrian would have loved getting to know me, and the least I can do to honor that stolen opportunity is try to learn about the health epidemic and state violence that murdered him. 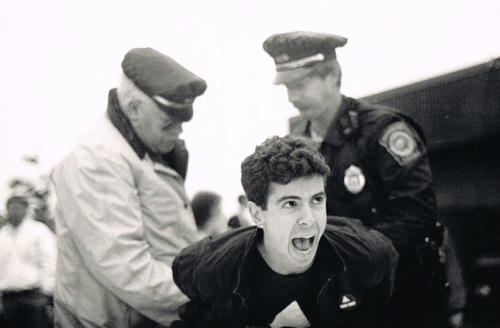 ACT UP member and TAG founder Peter Staley in an iconic image used on the cover of the documentary How To Survive A Plague.

As I dug into that 600-page book, exquisitely written by journalist David France who was writing and loving in the NYC AIDS community during the 80s and 90s, I was enraptured by the story of doctors, activists, researchers, sex workers, journalists and Wall Street executives linking arms to conquer the worst health crisis of the 20th century. No one in power cared about the plight of hundreds of thousands of gay and bisexual men, nor about the other groups predominately affected, including lesbians, trans people, and queer and straight people of color. So queers joined together and made it too expensive, too much of a publicity nightmare, and too dangerous for politicians and medical gatekeepers to not care. ACT UP and the Treatment Action Group (TAG) mobilized people with AIDS (PWAs) and allies to educate themselves and others about the reality of the disease and the available science, and then they took action.

My relationship to my own privilege and oppression had shifted dramatically after the election, and everything felt more urgent. I read this story of unbearable urgency and thought about just how much we can learn from our queer and trans forebears who made AIDS chronic instead of deadly (at least in theory — millions are living with the disease because of the medical advancements that ACT UP and TAG made possible. However, more than one million people die every year of AIDS because treatment is cost-prohibitive or otherwise inaccessible). Here, inspired by the book and documentary How To Survive A Plague, are five lessons we can learn from the AIDS movement.

ACT UP got great press by proceeding as if they had nothing to lose — because they didn’t. Their work was a matter of life and death. Performance artist Ray Navarro went to actions dressed as Jesus, protestors chained themselves to pharmaceutical company waiting rooms. After years of not being able to get anyone to mention the AIDS crisis outside of gay newspapers like The Native, they weren’t afraid to make a scene to get a few column inches or minutes of airtime. They also made their own press. Much of the archival footage in Plague is camcorder video that ACT UP activists took of themselves and each other. 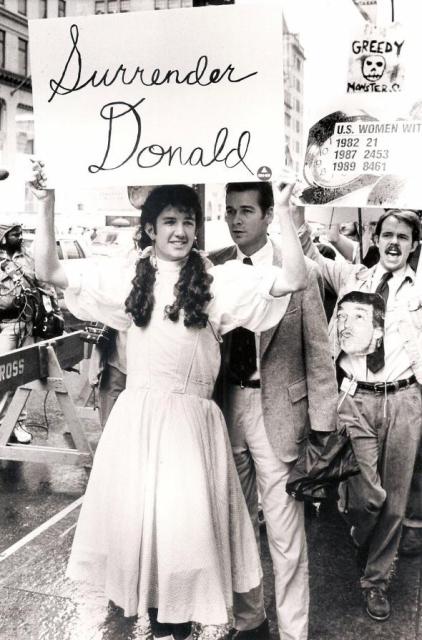 A protestor dressed as Dorothy outside of Trump Tower as part of an action against housing inequality. Source: Slate.com

In this age of viral videos and ice bucket challenges, finding ways to create publicity for your cause, action or policy aim could be the difference between a tepid, frustrating experience and a truly impactful political moment.

2. Play to your strengths

AIDS activists included organizers, scientists, doctors, politicians and artists. They included people willing to get arrested over and over again and people who put on suits and ties and A-line skirts to meet with high-level political officials and drug developers. The terminology they used was “insiders” and “outsiders.” The outsiders would make noise and raise hell to create a pathway for the insiders to get the meetings they needed to advance political and medical goals.

I used to feel shame because I don’t feel comfortable holding up signs at protests. I think my news reporter training is too ingrained. But there is so much I can do. I can write, first of all. I can give money, I can show up for friends in need, I can call my representatives. Find your niche, use your skills and leverage your power to make the most impact.

People With AIDS and their allies were never satisfied, and that’s part of what made them so successful. When the FDA, the Bush Administration, or pharmaceutical companies granted one of TAG’s demands, they were immediately ready with plans to take it further. They didn’t just insist that companies make drugs available, they insisted they follow TAG’s recommendations for implementation and treatment.

It’s safe to assume that the institutions blocking us from dismantling oppressive systems will always try to give us as little as possible in an effort to pacify marginalized communities. Vigilance and preparedness will allow us to leverage small gains into bigger victories.

In the early stages of the disease, HIV primarily affected white gay men. After all, the gay community was largely segregated. However, over time men of color, trans women, and cis women also began contracting the disease. They were often excluded from the leadership of activism and the from clinical trials for potentially life-saving medicines. For example, by 1986 it was clear that Black and Latino communities were affected by AIDS at disproportionately high rates, and they struggled even more than white gay male communities in coastal cities to acquire any medical attention.

Although the source materials in How To Survive A Plague demonstrate some awareness of how not OK that was, my overall impression is that this is one area where we have to do better than the leaders of ACT UP and TAG. Now as then, trans women, queer people of color, bisexuals, and other marginalized groups experience risk factors such as depression, poverty, risk of experiencing abuse, employment and housing discrimination, and more at even greater rates than white gay men and cis lesbians. We have to incorporate these understandings into an activism that is not only intersectional but that centers the experiences, work, and needs of our most marginalized siblings. For myself, my next step is to learn more about the role of trans women, bisexuals and queer people of color in early AIDS activism.

I’ll leave you with this clip from the documentary of Spencer Cox, who died shortly after the film was released.