The first three seasons of Élite delivered a cornucopia of sexual trysts and alternative relationships within its ensemble of oft-homicidal teens: marchioness Carla fucking Christian (the new cocky kid from the wrong side of the tracks) while her semi-sociopathic boyfriend Polo masturbates in the corner; a love triangle between brothers Samu and Nanu and their mutual object of affection Marina, the free-spirited daughter of the ruthless developer who destroyed Samu’s school; a love triangle between rich kid bully Guzman, his sassy oligarch fuck-buddy Lu and reserved Muslim student Nadia (who Lu goaded Guzman into pursuing as part of a bet that he could take her virginity); a secret gay relationship between Nadia’s brooding brother Omar and impeccably-jawed tennis star and principal’s son Ander; a secret sexual relationship between aforementioned Lu and her ACTUAL HALF-BROTHER Valerio that involves an ATTEMPTED TOEING at the DINNER TABLE; furtive bar bathroom sex between Omar and Nadia’s new boyfriend Malick; and last but not least — a three-way relationship between former grifter Caye and alleged murderer Polo and unleashed troublemaker Valerio because nobody else wants to be friends with them.

However, the ever-so-simple arrangement of two girls and one bed (or one club bathroom or one expensive sofa or one swimming pool) somehow consistently eluded this otherwise queer-inclusive television program that I suspect has featured more threesomes involving 2+ boys than anything else on television outside of the “Cast Full of Gay” cannon. Prior to Season Three, the show’s sapphic content was limited to Polo’s corrupt power lesbian Moms and a quick kiss in a Season One game of Spin the Bottle.

In Season Three, we got some hope on the horizon: outspoken motorcycle and silk-boxing-robe enthusiast Rebeka revealed to gay sad boi Ander that “sometimes girls turn me on, too” including, unfortunately for her own sense of inner peace and justice, the elegantly eyelashed Carla. But Rebe’s storylines remained heterosexual until Season Four dropped on Netflix in June to say HAPPY PRIDE! 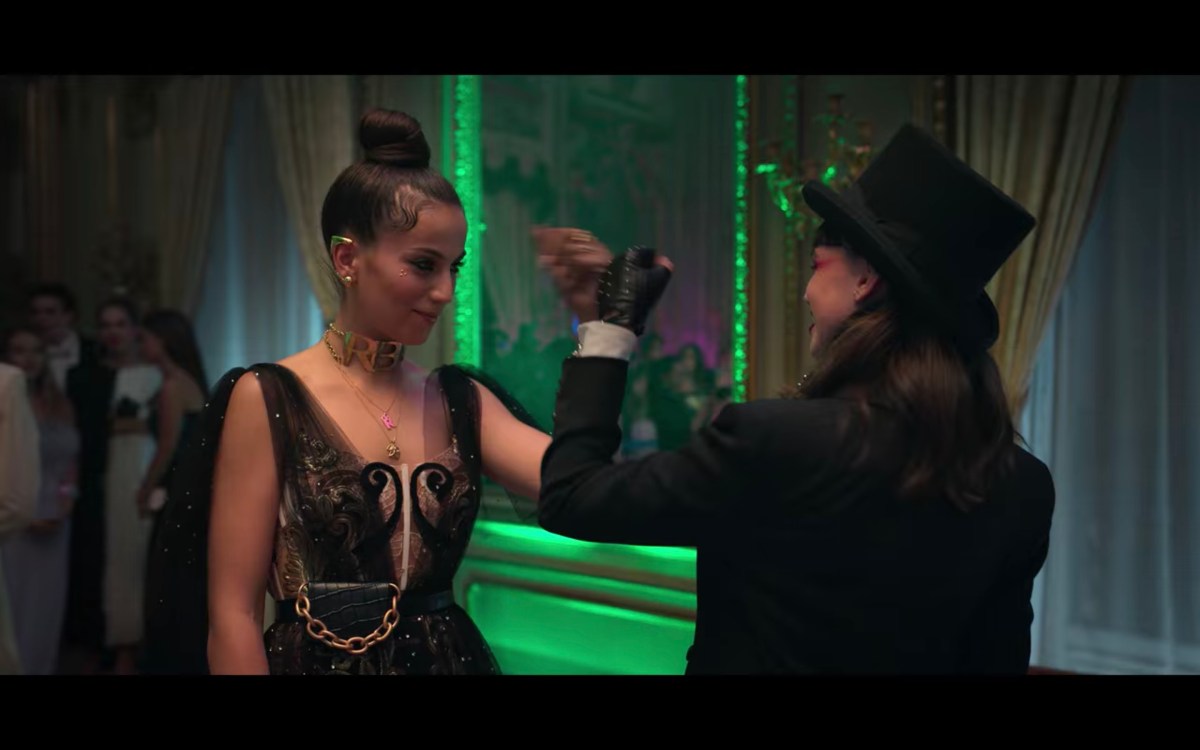 As in prior seasons, Élite delivers a new scandalous mystery to rewind and build towards, this one involving one of three new students whose arrival, as they say, is destined to “shake things up” at Las Encinas. Although this school is plagued by death and scandal at levels all-too-familiar to alumnus of Rosewood, Constance Billard School for Girls, Harbor, Riverdale and Southside High; Élite’s has always managed its expansive cast and high-concept storylines with a bit more attention to detail and tonal consistency than the American shoes its often compared to. Élite’s fishbowl class war infiltrates, impacts and twists the lives of its characters in unexpected ways, and these seasonal mysteries are as much Whodunits as they are Who-Pays-For-Its.

Four new students join us in Season 4, three of them courtesy of Las Encinas’ enterprising new principal Benjamin, tasked with turning the school around by improving its reputation and position as a comfy place for rich kids to play, like Prince Phillip of France, whose enrollment comes with an entire security system. Two of Benjamin’s children, Patrick and Ari, are seemingly on board with their fathers commitment to keeping working class kids down, despite coming from a working class background himself. His youngest, Mencía, is a tougher nut to crack. She’s eager to reject her family’s bourgeois values with the confidence of a person who has never really had to struggle for anything.

Mencía is immediately drawn to Rebeka and her collection of metallic neck-cuffs and cropped jackets, informing her that she is a fan of her “vibe,” aka her attitude (cynical), expression (alternating between a disappointed frown, a presumptive frown, and a truly charming shit-eating grin) and the way she walks (like a gazelle). Certainly, all three of Benjamin’s children are Rebe’s first solid competition in the school’s long-running but never-mentioned Uniform Alteration Contest. Rebe wearing just a bra and a mesh jacket to school? Mencía will see that and raise you a studded body harness and a straight-up VEST. 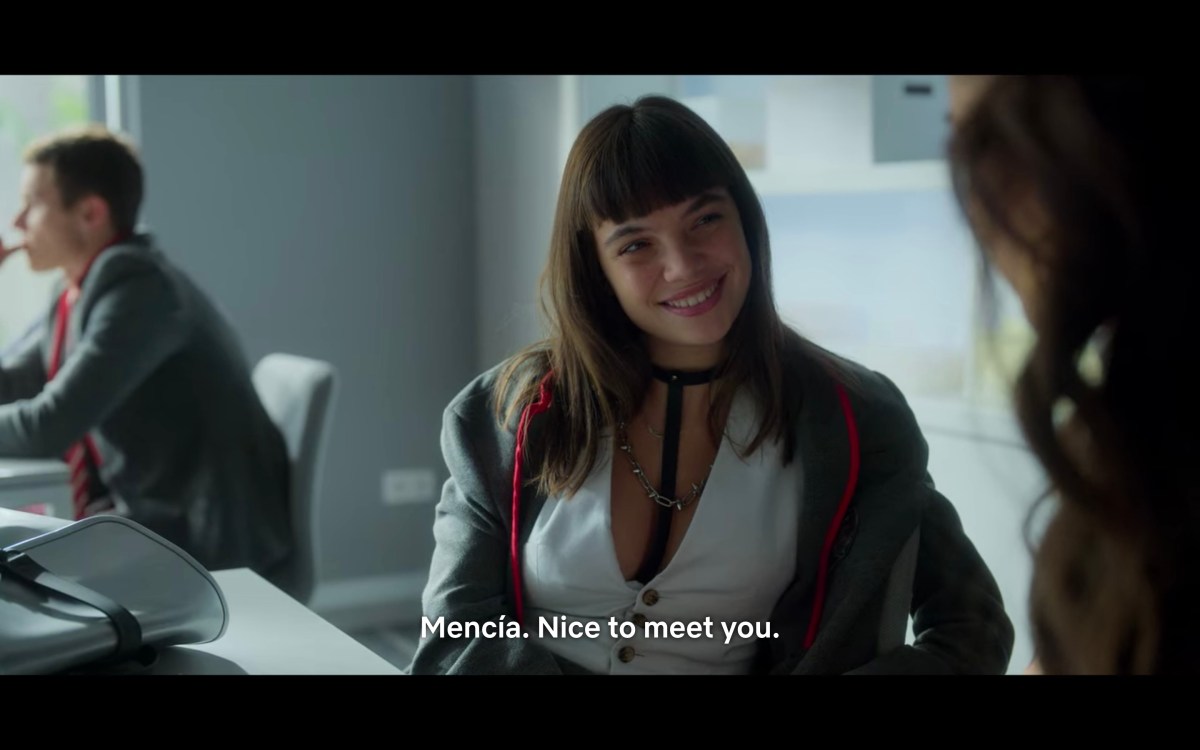 Rebe’s got walls up after her heartbreak and massive betrayal vis a vis Samuel last year and is firmly opposed to getting involved with Benjamin’s daughter, despite Mencía’s insistence that she’s just as turned off by his classism as Rebe and her friends are. Mencía pursues Rebe with zeal that often verges on totally inappropriate, and the show (like so many shows before and after it!) portrays this dedicated pursuit like a reasonable method of courtship. Eventually they have a proper date, the kind that happens on an elevated skyway in a glitzy city where everybody is wearing a serious Outfit and the moonlight is beautiful.

Meanwhile Mencía is angling for an escape, like so many rich girls in television shows disillusioned by Late Capitalism, and thus flees home with her duffle bag to strike out on her own, hoping to impress Rebe and gain distance from her family’s whole deal. She pleas for Rebe to meet up where they danced last night, but Rebe ignores her in favor of punching her punching bag, just like Shane!

Thus Mencía stumbles into a clumsy storyline that seems to be framed as her becoming a sex worker with one client, Armando (who is likely twice her age — as the youngest child in her family, Mencia can’t be older than 16, but this element of her work is never addressed) but the LA Times says is a story about the danger of OnlyFans? Armando puts her up in a hotel like a real creep. At least half of Elite’s storylines are about blackmail, which means every child on this program needs to do something blatantly terrible or somewhat illegal as part of their adolescent development, so I guess this is hers! (Prostitution is decriminalized in Spain, but “pimping” is not, which does eventually happen.) Saying any more about this specific story would get into iNTENSE spoiler-ville so I will rest here.

It’s painful to see Rebe on the other end of yet another partner AND her mother actively lying to her, but the messier things get, the more Rebe’s best qualities shine through: loyalty, empathy and a bleeding heart. These are all known chronic conditions of sapphic women. But it also pushes against tropes to have their relationship issues entirely unrelated to their sexual orientation, which neither of them officially label.

But I think they kiss twice before Mencía suggests they move in together? This is gay stuff. 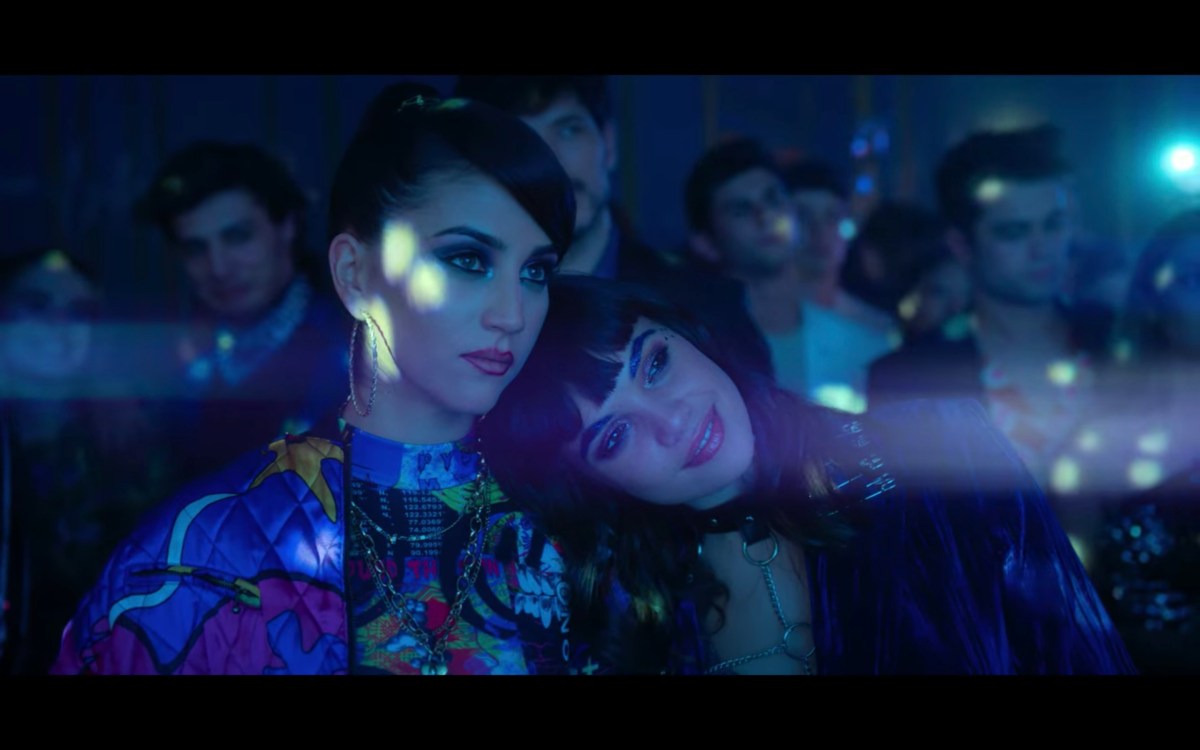 I don’t have any complaints to register about the boy-on-boy sex scenes that have occurred with abandon, but seeing Rebe and Mencía in bed together naked — like the bajillion couples on this show who came before them — was like a long overdue gift. I wasn’t even mad that rubbing chocolate all over your naked body is a one-way ticket to Yeast Infectionville. Actually that’s not true, I was very preoccupied by this possibility.

Élite excels for its character work but also because it is rarely predictable, and not in that Pretty Little Liars way, which kept you on your toes because it was simply too bananas and stupid for anybody to possibly guess what was coming. After three seasons circling the fallout surrounding the first season’s momentous murder, it’s good to see the show maintaining its central conceit without repeating itself. With Rebe and Mencia on the short list of characters returning for Season 5, one can merely hope that more scissoring is in store for us all.