Before I started playing Dragon Age: Origins this month, the closest I ever came to participating in a role-playing game was poking around AOL chat rooms in the late 90s. My screenname at the time was Zorba2222, which in retrospect was probably misleading since I am not at all Greek. I just picked it off of a poster because I liked words with Zs and Xs. I don’t actually remember much about the chat rooms, only that I’m sure I did way more lurking than interacting.

It was intimidating; I was an awkward thirteen-year-old on my own in a sea of actions and A/S/Ls, with no real idea of how to actually participate in the game. Which was a shame, really, because thirteen-year-old me would’ve loved playing RPGs. I know this because thirty one-year-old me definitely loves it. A few weeks ago, my buddy Dufrau (who also writes about video games on Autostraddle dot com!) let me take her old PS3 and a bunch of games, and thus began my journey into Ferelden, the fictional backdrop of Dragon Age.

The first awesome thing about DA:O is how many ways you can customize your character! This is probably/definitely old news to anyone who is not a total RPG noob, but it made me endlessly happy. I spent way too long creating my character, and she ended up mostly looking like a cross between Furiosa and Lexa, the forever Heda of my heart. 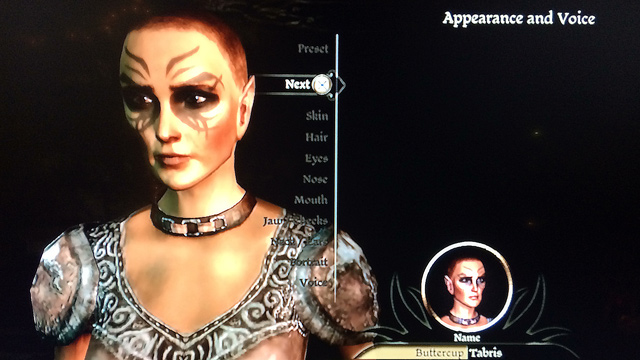 I know what I’m about.

Her name is Buttercup, because my wife figured a sweet-sounding name might lull my enemies into a false sense of security. That way I could spring into action and merc them right the fuck up before they even realize what I badass I am. Infallible logic. Anyway, I’m Buttercup and I’m an elf, so my story begins in my home alienage. (Alienages are where elves live – they’re segregated and enslaved by humans, because humans are the worst all the time no matter if it’s fiction or real life.)

It’s the morning of my would be arranged marriage to a random elf dude, which I am 100% not here for. I spent most of the day complaining about the wedding to anyone I could talk to, but they all seemed to just think I was being sassy and not serious. I met another elf, Nessa, whose family was trying to get her to leave the alienage against her will. She asked for my help, but I couldn’t convince her father to let her stay. I was pretty devastated. Not only was I worried about Nessa’s fate, but I’d been given to believe that I could romance women in this game. How could I have already messed things up with my first potential girlfriend? Obviously I couldn’t leave it like that, so I restarted the game to replay our interaction. 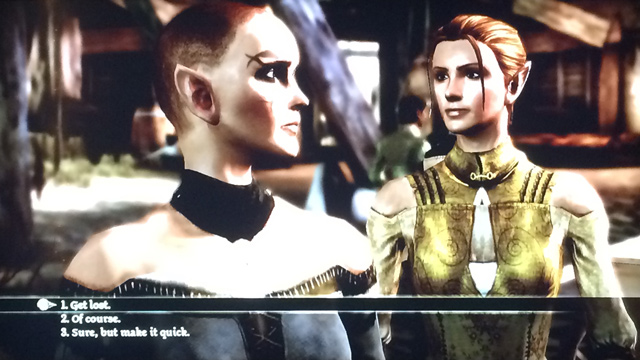 Look at that searing eye contact. Sparks are flying.

After helping Nessa out, I finally had to go get married. Thankfully my wedding was interrupted, but, in the process, my fiancé was slain (sorry bro) and a few other women and I were kidnapped. I managed to fight my way out and save everyone, because I’m a total badass and, also, am playing this game on casual (the easiest mode). Speaking of the gameplay, I found it to definitely be a bit tricky to get the hang of, especially during battles. The nice thing about casual mode, though, is that you can’t hurt or be hurt by other characters in your party. I honestly don’t think I would’ve made it very far at all if I was playing on a harder mode.

Anyway, after I killed a bunch of important and terrible humans on my almost wedding day, I was recruited into an ancient order of Darkspawn (which are demons, basically) slayers called the Grey Wardens. Look at how cool I am, leading a bunch of dudes on a mission like a boss: 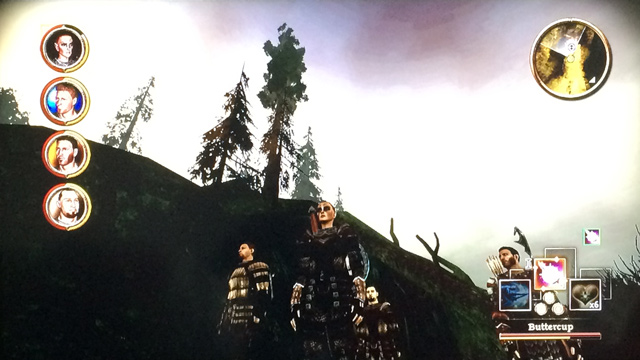 Don’t fuck with my clique

Not long after I became a member of the Wardens, my brethren and I were betrayed in battle by Loghain, the King’s father-in-law. Lots of people died, including the King and almost every other Grey Warden. It was really tragic and all, but I was saved by a witch named Flemeth. More importantly, I woke up topless to find out that her daughter, Morrigan, had patched me up. 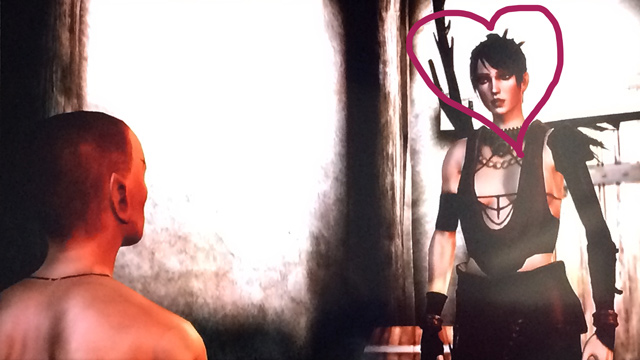 Let me tell you about Morrigan: she’s sarcastic, selfish, lacks a moral compass, and isn’t ever completely trustworthy. And I love her. I have spent many hours trying to romance her, but I’m pretty sure she’s never going to love me back. The woman is ice cold; she disapproves of any nice and/or heroic thing I try to do and she is actively mean to me a lot of the time. Somehow, it only makes me like her more.

Though I haven’t been successful at romancing Morrigan, I also haven’t been completely celibate: I accidentally had sex with a sex worker. To be honest, it wasn’t at all how I envisioned losing my video game virginity. I didn’t even realize I was in a brothel until I started talking to the owner and she asked if I wanted men, women, or both. When she presented me with a lineup of people, I assumed selecting one would just let me start a conversation. Wrong. Instead, I suddenly found myself in a bedroom. She gave me a sexy look, the screen faded to black, there was a single moan, and then all a sudden I was alone in the room wearing just my underwear. What a blur.

Other than trying to charm Morrigan, there’s a ton of plot to get through in the game. It’s a pretty huge world, and every area is dense with people to talk to and things to do. Each time I think I’m almost done with a particular part of my quest, it turns out there’s another step I have to complete. I’m absolutely loving it, but I can see how it might get frustrating if you’re looking for a more straightforward thing where you just have to get from point A to point B. 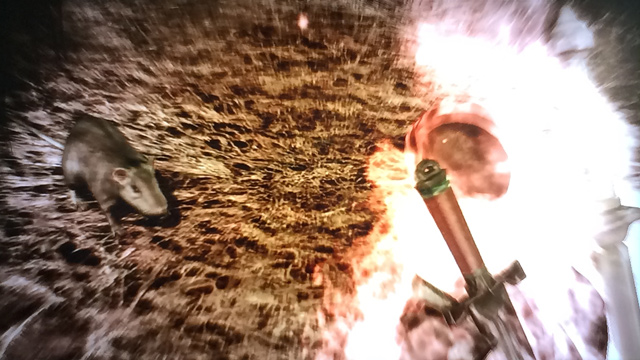 Sometimes you don’t mean to, but you end up on fire, talking to a mouse — no big deal

I’ve put almost thirty hours into the game since I got it, but I feel like I’m nowhere close to being done. One thing I wish every single game had was the ability to rewind time like in Life is Strange. I’ve had many regrettable conversations (mostly with Morrigan, my sweet angry bb) and it would have been rad to re-do them. Slowly but surely, I’m getting better at combat; I’m figuring out how to equip the different members of my party and what tactics they need to learn and use. Hopefully by the time I finish Dragon Age: Origins on casual, I’ll be able to play Dragon Age II on regular. It’s important to have goals for the new year, as well as a distraction from our nation’s impending collapse. Happy holidays!