Dean Jacquelyn Litt is the dean of Douglass Residential College, the women’s college at Rutgers University. And in January, a former Douglass Residential College employee Laura Federico sued both Dean Litt and the University on the basis of wrongful termination. Federico, who was fired from a senior-level public relations position, says that Litt “felt that women who had men behind them were stronger and better employees” and had been warned by other employees that Litt didn’t like lesbians. The lawsuit even goes so far as to say that other gay women in the office had been forced to transfer or resign, or had even been fired. That’s pretty clear language – and it was no secret that Federico is a lesbian. She kept a picture of her wife on her desk. 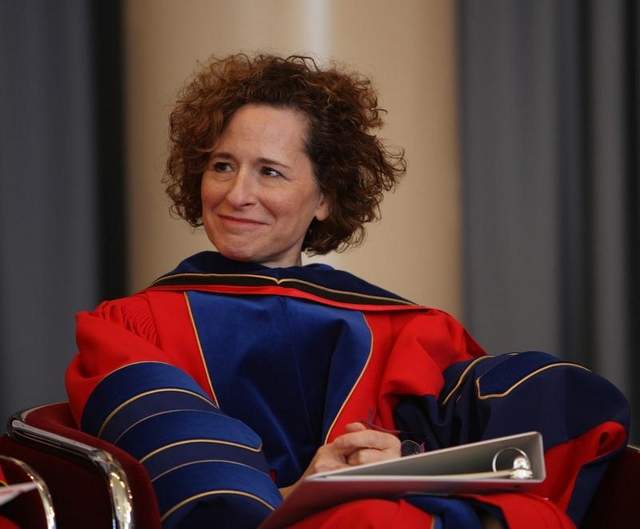 Dean Litt via My Central Jersey

Rutgers University says, however, that firing Federico had nothing to do with sexual orientation, but rather that she couldn’t meet deadlines and that her work required “substantial revisions, changes or reworking.”

The shit part here is that we don’t know who’s in the right – was Federico a bad fit employee because of the quality of her work? Or did Litt’s prejudices have something to do with the decision to terminate, and everything else was a justification?

I can only offer the following few things:

I graduated from Douglass College before it became Douglass Residential College. It’s pretty lesbian friendly, being that it’s the women’s college at Rutgers. I never had any weird experiences with any of the Deans from my time there – only very good experiences. Dean Litt took her position after I graduated. As for the environment in general (i.e., the other students,staff in other parts of Rutgers), I’d say it’s no more hostile to lesbians than the rest of planet earth.

But I also wouldn’t be surprised if this were totally true – hell, I’ve been railroaded out of groups because people didn’t like me. Who hasn’t? This has literally happened to everyone. People start looking for reasons to eject you based on their personal feelings, and it becomes increasingly difficult to do everything perfectly with all eyes on you. Dean Litt may not have even been aware that her prejudices were affecting her decision. It happens. And the shit part of that is queer people then have to perform at a higher level than everyone else to just not get fired.

We don’t know, though. And we won’t know until the lawsuit has been settled. Federico was let go last October and the lawsuit was filed in January. And all of this is only coming to light now, so I’ll be sure to keep you updated. All in all, it’s been a super bad few years for Rutgers publicity-wise, and this may just be an attempt to jump on the bandwagon, as it were. Or it might not be. Discuss.