Good news, Australia. Over the next three months you’re going to have multiple opportunities to experience the wit and charm of DeAnne Smith in person.

DeAnne is taking her act, “About Freakin’ Time,” to the Sydney and Melbourne comedy festivals. For 50 minutes, DeAnne vows to dissect that pesky fourth dimension, broaching time travel, God, vengeful dolphins, and more. Plus deliver at least 450 seconds of bonus unscripted hilarity!

She’ll also be traveling around the country as part of the Melbourne International Comedy Festival roadshow.

Here’s what the critics are saying.

“Witty, sideswipe punchlines. This gal’s ready for the big leagues.” – Time Out Sydney 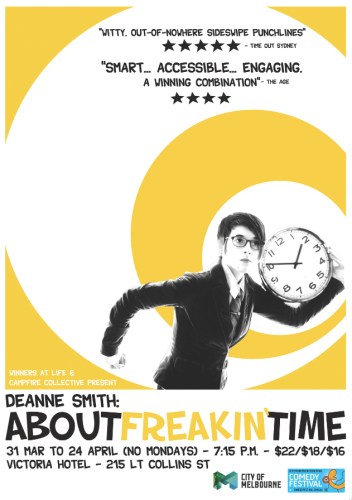 * On Saturday May 7 a group of Autostraddlers will be attending DeAnne’s Sydney show and you should come too! Order your ticket/s online and then get in touch so that we can coordinate our plaid. crystal at autostraddle dot com

According to the Roadshow website, a bunch of the Festival’s finest Australian and international comedians are going to cram healthy egos into tiny suitcases and hit the highways of our mighty continent.

DeAnne will be performing on the dates below. Google or check your local paper for the full line up and event details.