For National Coming Out Day, we are celebrating the stories of perpetual and continuous coming out — the ways our identities keep shifting and changing as we grow and get to know ourselves even better. 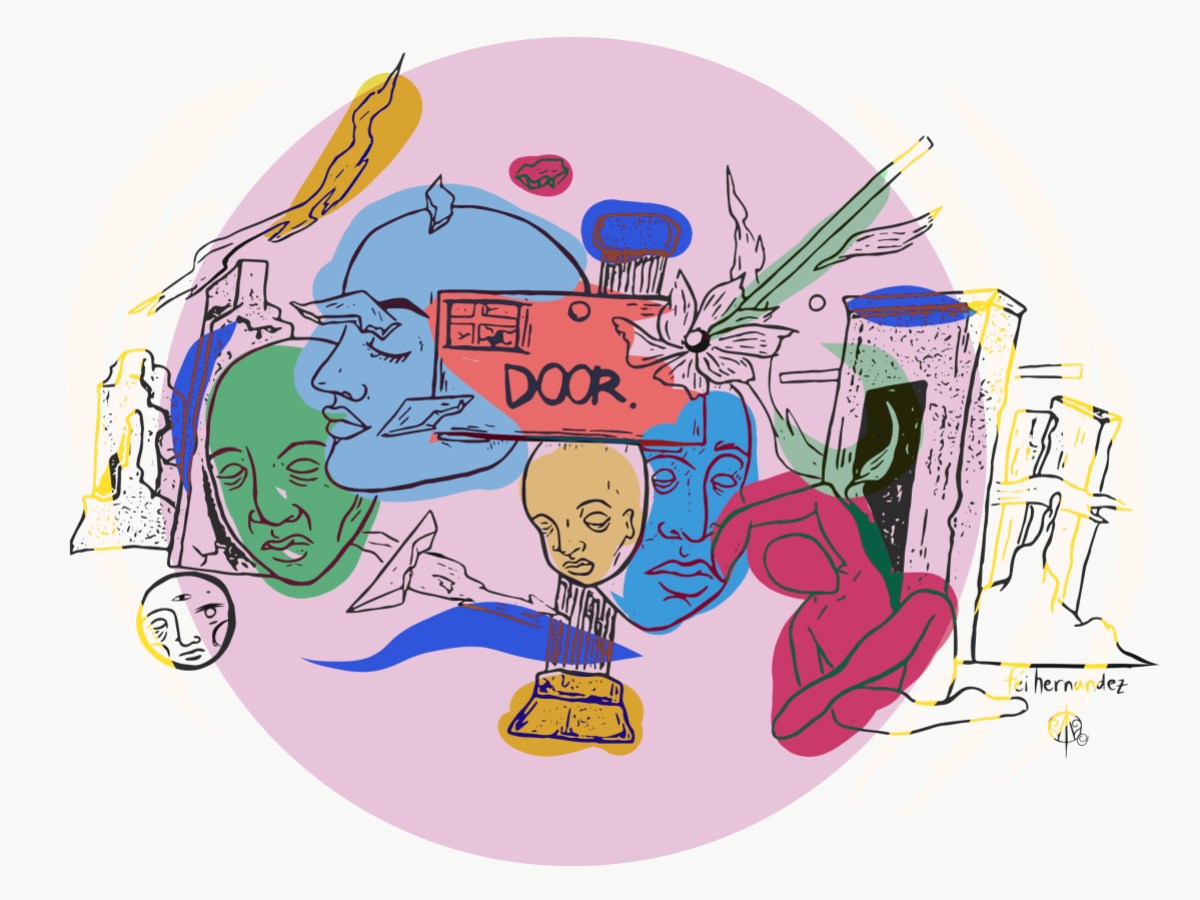 To be Mexican, to be trans, to be an immigrant in the context of the United States is to come out of a labyrinthine closet, one with many doors to walk through — if you are modest — or walls to claw through, if you’re like me. Every day we discover our individual truth outside of imposed expectations, and allow ourselves to meet our edges or what’s beyond them, I present, we step closer to our liberation, individually and collectively.

To come out as Mexican or my case Chihuahuense is to come out of a national or regional identity and assume the blood you were made from. To be Mexican is to know your privileges, know how your white skin has served you. It is to know where your Native or Black blood comes from, not only the trans-Atlantic blood seeped in your bones through acclimation, revolutionary alliance, surrender, rape, or otherwise love that grants you access. To be a white-skinned Mexican is to come out as multi-racial, a mixed person largely tempered with colonial blue blood and Indigenous or Black blood, if there are truly any in your DNA. Your truth can set you free, but more importantly, set our trans queer Black and Indigenous people free.

When addressing coming out as a trans person, I can’t ignore having come out as an undocumented person (inherent in this statement: an immigrant — more specifically a childhood arrival, being classified as part of the .5 generation, in other words half-immigrant, only half-blamed for the decision my/our parents, regardless of what they were). I can’t ignore the ways in which I am part of a first generation to suffer and in the same suspiro have the capacity to experience joy within the context of the United States. I can’t ignore I came out as bi-sexual, gay, queer, then asexual, demisexual, then trans non-binary, then trans, then asexual again, then demisexual, then Mexican.

I have to come out as having been continuously stopped at the airport (for my Mexican passport and my criminal, bearded face), interrogated, but not for my white skin. I can’t ignore coming out as a green card holder despues, then a Citizen of the United States of America. My life could have been a room, housed within another room and so forth –– a fort of rooms around my heart, protected — in other words, hiding. As scared and alone as I was in understanding what, when, and who I was, I opened the first door of my labyrinthine closet, then opened the next, until I started kicking through the walls.

[As I write this essay I see yet another wild ghostly version of myself slipping through, out of closets I didn’t even know existed within me. In this case, it’s the closet of feeling legitimate enough to write about any of what I’ve written thus far.]

We’re always coming out. As an: anime fanatic, manga-collecting Pokémon plushie hoarder; as a giddy, youthful ray of sunshine and not just the dense, American Dream-deprived immigrant, prompted over-thinker — I realize I am more than any of these individual rooms at all times. Through this essay I’m coming out as a sort of acute observer, but without qualifications, such as those from an MFA writing program. I am a philosopher, an anthropologist, an existential mystic, an inquisitive sociologist who can only write from the slice of life from which I live, experience the world. The only true qualification is that I am one eager spirit exploring the existential meaning of true liberation, for all peoples, because this is my only truth, the only glow in the dark path out of my maze.

The only way I’ve found a piece of freedom is to come out — even if it meant risking my life every single day walking out of my house as a trans femme person, even at the expense of my whole Mexican family rejecting me because of violent machista cultural values (so grateful that I grew up in a matriarchal household), even at the expense of clocking my Pi’ma descendent grandmother for upholding anti-Black commentary, because unlike her siblings she inherited the confidence that beauty standards granted her in the city, once she moved from poverty — with her fair eyes and fair skin, but let’s not talk about the nose she couldn’t escape. It’s beautiful, to say the least.

Coming out requires an honesty meant for you, to liberate yourself and get closer to a collective truth. Which for me means claiming I — after so many years identified under the category of Person of Color, in part solidarity, in part finding a place as an undocumented Mexican person, as a queer person in the United States, who grew up in Inglewood — have to understand that our collective liberation requires I come out as a white-skinned (not ANGLO SAXON) Mexican, irrespective of my indigenous sacred antepasadas and irrespective of the Spanish colonial blood that define my creation. And by Mexican, I refer to the national culture/ ethnicity, and by Indigenous ancestors and colonizer Spanish blood I refer to the genetic makeup that makes me, which makes for my ambiguous racial disposition.

Coming out is addressing our privileges in that flight out the door, as much as it means spreading our wings wider. They do not exist independent of one another. So to surmise, I’m 46% Indigenous, descent to Native peoples in the geographical location known as the southwest United States + northern Mexico (Pi’ma and Tarhumara people) and the rest of me, mixed, long-forgotten, long-acculturated to a national identity of Mexicanidad: Spanish and Italian and Portuguese descendants (whom I’ve tracked to be gitanos, Gypsies) (whom we have absolutely no ties to whatsoever aside from the genes we inherited). I missed my fully, untempered Native grandmothers by a generation: my father’s grandmother who held her husband (a war-time nurse who rode alongside Pancho Villa) under a tree as he died during the revolution for independence in Chihuahua. And my maternal grandmother’s abuela who wouldn’t grant her permission into her home of mud near the river in the mountains of Madera because she was white, a mestiza.

I am trans, I have a womb although it bears no children. I am exploring polyamory, and am a huge fan of My Hero Academia. I am a sensitive person, yet simultaneously sensual and like to entice the world around me (you can blame it on my Taurus sun, or Venus in Aries). I am pensive and private, but also really funny and love being around people! I truly believe that every wall I clobber with a Harley Quinn-style sledgehammer I unleash a light to the world that is me. Our wings long for the expansive blue of the sky and we have to be okay with crushing anything in our way to come out, so that we can (with consent) help others (through spiritualemotionalfinacialphysical support or artessaysmusicetc.) break free and seize the present moment in REALNESS, not an arbitrary disguise, covering up our responsibility to ourselves and to our fellow humans on this planet.

The lie of my Mexicanidad, masked in my whiteness and national identity prepared me for the long life of constant coming out. It was by untangling every strand of my DNA, every cuento told to me of our (trans) antepasados, of violence, of migration within Mexico and the telenovela drama flare that landed us in the United States, did I understand where my queerness and it’s valiant strength and dedication to being free came from.

Everything we decide to do for ourselves, from our own volition, liberated from the strains of expectations, from the state, of all kinds, we come out as ourselves a little more and more each time. Borderless, wall-less futures require us to break them within ourselves. Require us to sit at the bottom of the ocean and breathe. The labyrinth closet will, with great work, one day exist as an ancient relic of the restraints that were handed to us at birth. In the new world, from where I write in an alternate plane, the only thing we will have to come out of and justify and love, is our birthing person.

féi hernandez (b.1993 Chihuahua, México) is an Inglewood-raised immigrant trans non-binary visual artist, writer, and healer. féi is an Advisory Board Member of Gender Justice Los Angeles and was one of the artists for Forward Together’s 2019 Trans Day of Resilience Campaign. They are a Co-Founder of ING Fellowship which provides mentorship and empowerment to Inglewood youth and was a femmetor for the 2019-2020 Seeds of Liberación (SOL) leadership development program for young transgender, gender non-conforming, and intersex (TGI) people in Los Angeles. They are a certified Reiki and Akashic Records practitioner who utilizes a decolonial approach to ancestral energetic healing. Their writing has been featured in Poetry, Oxford Review of Books, Frontier, NPR’s Code Switch, Immigrant Report, Nonbinary: Memoirs of Gender and Identity (Columbia University Press, 2019), Hayden's Ferry Review Issue 64, BreakBeat Poets Volume 4: LatiNEXT, PANK Magazine, amongst others. féi collects Pokémon plushies.

féi has written 1 article for us.