It’s a strange day when one of the biggest sports stories that isn’t highlights or previews of an actual game is about a punter who hasn’t played in his league for a year. However, that’s the case today when former Vikings Punter Chris Kluwe wrote an article where he lays out the case for his argument that his stance in support of gay marriage was a big factor in him losing his job as an NFL player. Kluwe makes very good points in saying that, although he is the Vikings record holder in several punting categories and was having a year that was on pace with his career averages, he was still let go during the offseason. He also brings up several times when special teams coordinator Mike Priefer was openly antagonistic toward him and made aggressively homophobic remarks in response to Kluwe’s activism. While Kluwe says that his situation doesn’t speak to a larger problem in the NFL, recent trends show that that might not be true.

I remember when Kluwe first “came out” in favor of gay marriage. Fellow NFL player Brendon Ayanbadejo had recently voiced his support for the legalization of same-sex marriage and had been rebuffed by a Maryland state delegate. In response, Kluwe wrote an open letter to that delegate voicing his own support of same-sex marriage and calling out the delegate on his fear that if two men got married he would “magically turn… into a lustful cockmonster.” Kluwe and Ayanbadejo were, quite possibly, the two most prominent active NFL players who openly supported gay rights at the time. This was half a year before NBA player Jason Collins came out, and at the time I remember thinking that this was likely as close to a men’s major professional athlete coming out as gay as we would get in the next five or ten years. And so I was pretty happy with him. Even though I’m a hardcore femme, I’m also a pretty big football fan, so both of these players were already on my radar by the time they started speaking up. I had hoped to see Kluwe continue his career in the NFL, so that he could continue to advocate for same-sex marriage, lead pride parades and soften the ground for the first openly queer NFL player. Unfortunately, he was cut by the Vikings and to this date, no active NFL players have come out.

It was nice seeing Kluwe’s advocacy, but I always thought that a little bit too much of a fuss was made over the fact that he is an ally. If you take a look at women’s sports, professional athletes have not only been speaking in favor of gay rights, but also actually being openly gay for decades. It’s unfortunate that the society we live in values and pays attention to men’s sports to such a higher degree that a punter being in favor of gay marriage has remained a news story for a year and half, getting without a doubt far more coverage than any single story about an out women’s athlete. As long as the NFL and other men’s professional leagues, have atmospheres of such heightened, and fragile, masculinity, this is the way things are going to stay. If a couple of outspoken allies is all we can get out of the NFL, each time another pops up it’s going to make headline news. 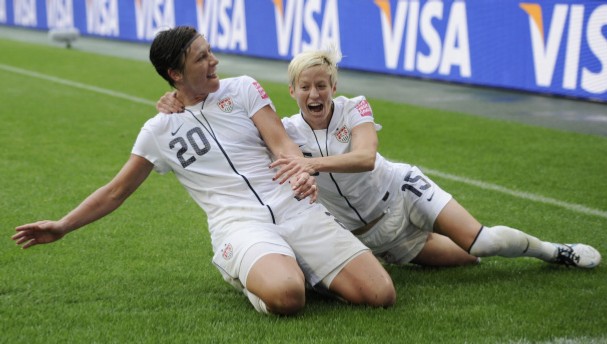 Megan Rapinoe and Abby Wambach, two professional athletes who advocate for queer rights who are also, you know, queer. via redding.com

It’s a strange thing, seeing a straight, cis man saying that he lost his job because (or partially because) he is an “ally.” For a lot of queer people, this is a regular thing. Currently, only 21 states have laws protecting LGBTQ workers. 38% of openly LGB workers say they have faced harassment at work and 78% of transgender people surveyed have said the same thing. Almost 10% of openly LGB workers have reported losing a job because they are queer and that number jumps to a shocking 47% for transgender workers. Kluwe might have felt like he was being attacked at his place of work for standing up for gay rights, but those attacks weren’t really aimed at him. For an ally to hear one of their bosses say “we should round up all the gays, send them to an island, and then nuke it until it glows” (as he alleges Priefer did) might disturb them and make them feel uncomfortable, but it’s not going to make them fear for their life. This anti-gay advocacy atmosphere didn’t just discourage Kluwe from continuing to speak out, more importantly, it is discouraging queer players from coming out. 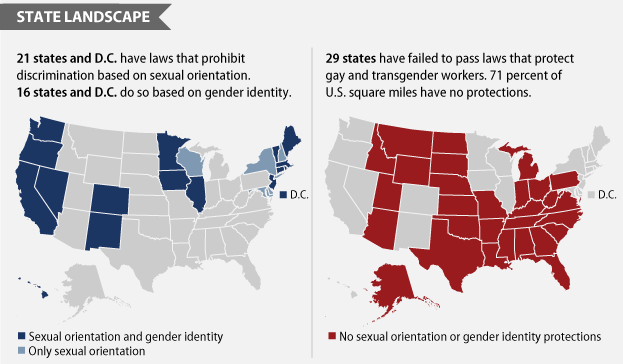 Priefer has denied the allegations that he made the hateful comments Kluwe said he did. He claims that he is not a bigot and that Kluwe was fired for his performance, even though during the time they worked together, Priefer publicly clashed with Kluwe’s advocacy on several issues. The Vikings are also denying Kluwe’s claims, but say that they will “thoroughly review the matter.”

Although the reasons for Chris Kluwe losing his job may have to do with his speaking out, he still felt comfortable enough to do so. He still felt like the NFL was a place where he could voice his opinion and not be shunned by his teammates, his peers and his fans. While Kluwe might say that he doesn’t think the NFL has a problem with institutionalized homophobia, the fact remains that no NFL players are openly queer. There aren’t even very many who are as vocal about their support of LGBTQ people as Kluwe was. The fact remains that the NFL does not seem like a safe place for queer men to openly exist at all. 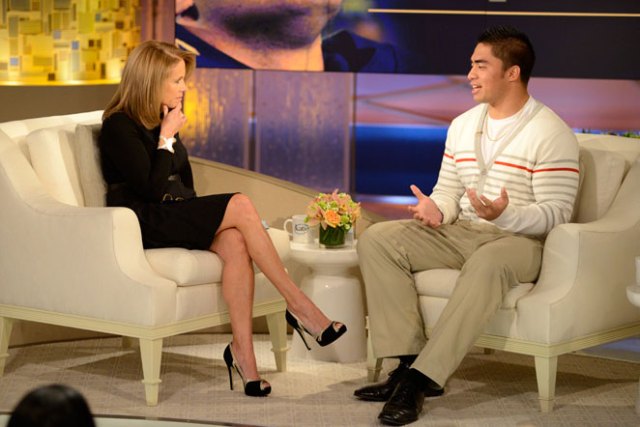 In addition to the small number of vocal LGBTQ allies in the NFL, the league’s relationship with masculinity and the gay community has been an extremely hot button issue in the past year. During the months leading up to last year’s NFL draft, several players had their sexuality questioned as a part of their pre-draft vetting process. The most famous of these was Manti Te’o, who claimed to have been the victim of a catfishing scheme where the person he thought was his long distance girlfriend was really a man posing as a woman online. Despite the fact that he went on national television and told Katie Couric “No. Far from it. Faaaaaaaaaaaaaaaaaaaaaaaar from it,” when asked if he was gay, several NFL teams were still factoring in his sexuality when they were deciding whether or not to draft him. Another college football player, tight end Nick Kasa was similarly asked the completely out-of-left-field question “Do you like girls?” during his interviews with several teams. While being gay has absolutely no effect on an athlete’s ability on the field, it’s apparently still enough of an issue that even rumors a player might be gay can hurt his draft prospects. According to an NFL spokesperson, “It is league policy to neither consider nor inquire about sexual orientation in the hiring process,” but that doesn’t seem to have stopped teams from trying.

This idea that the NFL locker room is a place for hypermasculine men who want nothing to do with homosexuality or anything considered unmanly reared its ugly head again this fall when offensive lineman Jonathan Martin abruptly left the Miami Dolphins due to racist bullying and an abusive atmosphere in the locker room. When Martin left the team, many news and gossip sites reported that he was being bullied because he was gay, despite there being no evidence that he actually is. What Martin is, is a Stanford educated man whose parents both attended Harvard and was considered by some teammates to be “not as black” as Richie Incognito, his white teammate who led the bullying and called Martin racial and homophobic slurs. 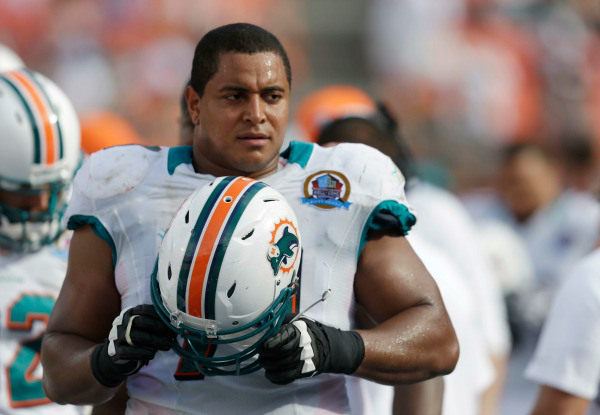 Not only did Martin have his sexuality and manhood questioned before he quit the team, but the attacks continued after the fact. Several Dolphins teammates quickly jumped to Incognito’s and the other bullies defense, even though transcripts and recordings of him shouting epithets and death threats towards Martin were made public and another player threatened to rape Martin’s sister. None of these claims were denied, the players just thought that Martin should have “manned up.” Former NFL great Lawrence Taylor added his opinion by saying that he would allow Incognito in his locker room before Martin and that “If you are that sensitive and weak-minded, then find another profession.” Others said that they thought the correct course of action would have been for Martin to physically fight Incognito if he had a problem with him. Perhaps these players would be more proud of Kluwe, who instead of asking for workplace protections, thus admitting he needs help and support, insulted his former employers and called for them to be punished. Kluwe took the more “manly” path, the path of revenge. How can we really talk about professional sports being a more welcoming place for queer athletes if we can’t even agree that openly antagonistic interpersonal relationships, even between straight people, are a bad thing?

Kluwe’s case is just the latest in a year where heteronormativity and masculinity have been huge issues for the NFL. Even Kluwe’s articles calling out homophobia have been exercises in manliness and masculinity. He makes sure that while he’s defending the right for same-sex couples to get married, he sounds as tough and aggressive as he can. Maybe these are some positive signs, though — if they can get us talking about the problem and questioning these long held attitudes. Another important thing to remember is that none of the people targeted for going against the NFL’s apparent strict “no homo” policy actually are openly gay. If they were, it’s likely that they never would have gotten to this point in their careers in the first place. At this point last year, both Kluwe and Ayanbedajo were still on NFL rosters, other players were being called out on their homophobic comments and things looked good that the first openly gay NFL player was just around the corner. However, with draft prospects being questioned on their sexuality, players potentially being cut for supporting gay rights, poisonous locker room cultures and even “allies” continuing to be examples of hypermasculinity and heteronormativity, perhaps we haven’t really come as far as we had thought.