We are only five days into the first official week of the 2015-2016 TV season, and already:

+ Barbara Gordon got agency and swagger on Gotham.

+ Grey’s Anatomy kicked off season 12 with a Very Special Episode about a teenage lesbian couple who got hit by a train and both of them lived.

+ AND VIOLA DAVIS MADE OUT WITH FAMKE JANSEN BECAUSE ANNALISE KEATING IS BISEXUAL.

But wait, there’s more! (There’s a reason we decided to split this column into a twice-weekly situation.) 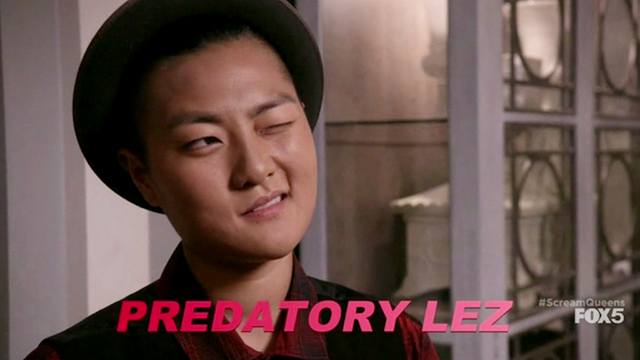 I’m part of an elite group of patriarchy smashers knows as the Lesbian Blogger Community.

To exactly no one’s surprise, Scream Queens plays like if Rachel Berry had a drug-induced camp-horror fever dream a la Spencer Hastings on Pretty Little Liars, which actually sounds kind of cool when I type it, but only as a standalone episode of a show I was already forcing myself to watch for work. What I’m saying is you’ve seen these Scream Queens characters before, even if you’ve only seen the pilot episode of Glee because Ryan Murphy has one idea and he bends every new show he creates inside that idea. The fact that he’s joined here by Ian Brennan and Brad Falchuck — alone again, with no writers room — just makes the Glee juxtaposition even more inevitable.

Jeanna Han plays a lesbian character named Sam (“or Butch or Mac or something”). She does not play Santana Lopez because there is truly only one Santana Lopez and — as Murphy & Co. proved when they tried to create a New Santana along with a New Rachel and a New Quinn and a New Finn and a New Puck because THEY CAN SERIOUSLY ONLY WRITE ONE SET OF CHARACTERS — Naya Rivera is what makes Santana Lopez the fully realized unicorn-monster that she is.

On Scream Queens, New Directions is a sorority, but instead of being outsiders, they’re the ultimate insiders … until Jamie Lee “Sue Sylvester” Curtis launches a vendetta against them and makes them take in outsiders. One of those outsiders is “Predatory Lez,” Sam, who is only on-screen for a hot second, and who I think gets murdered in the first three episodes. Wide-eyed Grace wants to return her mother’s former sorority to its glory days, full of girl power and lasting friendships and come on y’all Don’t Stop Believin’. Gigi “Schuester” is Kappa’s national president and a resident do-gooder who wants to help Grace see her dreams come true. What’s standing in Grace’s way is more than just mean girls! There’s a real live murderer on the loose!

Everything else is the same, though: Minority-on-minority crime, everybody is dressed like a house full of dolls after an apocalypse, no one has a filter and everyone says the most horrific and ~subversive~ shit to each other, and a couple of jokes you actually can’t help but laugh out loud about no matter how bitter of a former Glee recapper you are. For me it was: a sorority white party “where everyone is encouraged to wear white-slash-be white.”

If Lea Michele is your fave and you want to see her act, I mean, just FULLY unhinged, stick around until the next episode, at least.

Empire is back! The Lyons family picks up where we left them: Lucious has been in jail for 3 months and Cookie has put together a #FreeLucious concert where the artists talk about Black Lives Matter and the mass incarceration of black men. Everyone asks why they are doing an event to free Lucious when it is clear that he killed Bunky. Even Al Sharpton tells Cookie that he can‘t back her on this one because Lucious is guilty. Hakeem is still mad that Lucious chose Jamal to run the company, so he and Cookie have a plan for a hostile takeover. Andre is still waking up in cold sweats and his wife is pressing him about that little matter of them murdering Vernon. 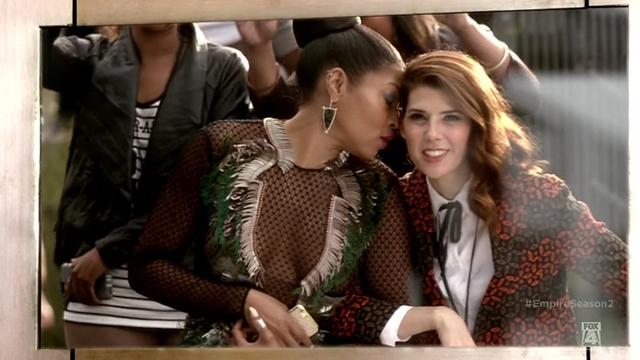 On the real, your Brokeback Bette Porter thing is working for me. 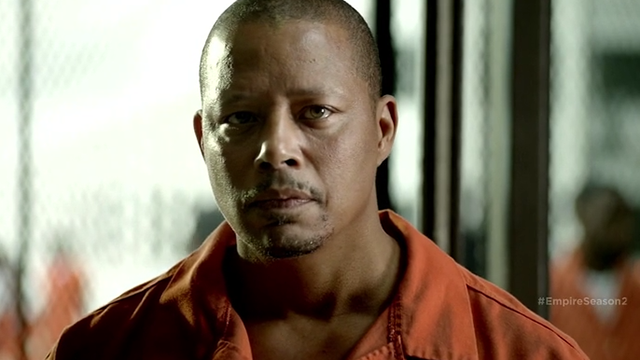 CHANGE THE CHANNEL, BURN THE TV!

Meanwhile Lucious is in jail along with Cookie’s friend that murdered the guy she thought was leaving her mysterious roses. He informs Lucious that the gangster Cookie ratted on, Frank Gathers, is being sent to their prison. Lucious doesn’t seem concerned and I wasn’t either when Frankie arrived and turned out to be Chris Rock. What is this, CB4?

We meet new lezzy character, Mimi Whiteman, who is a possible investor that Cookie is trying to impress to finance her Empire takeover. To help her cause, Cookie throws a huge all girl party to give Mimi her choice of the woman that she wants to sleep with. Ultimately, she tasks Anika with the job of sleeping with Mimi to get on her good side.

There are still some things I am trying to figure out about the Cookie/Mimi dynamic. This is more than simply Cookie catering to Mimi’s preference for women, and I have questions. Cookie seemed a bit too cozy with Mimi at times, almost as if there was something between the two of them. Could we see a story there in the future? Is anybody ready for the heat that would be generated between Taraji P Henson and Marisa Tomei? I’m still feeling out the Mimi character. It’s obvious that she is going to be the wild card this season, but I’m excited to see a power lezzy on network TV. 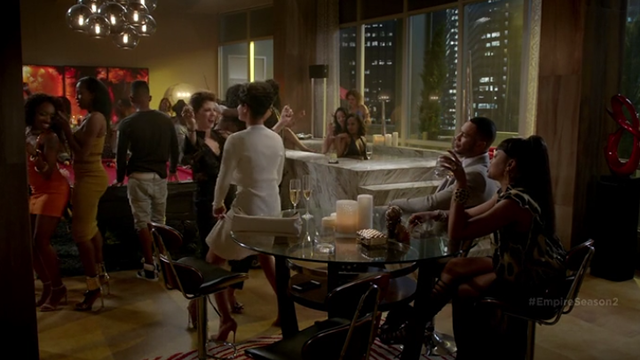 Back in jail, Lucious crosses paths with Frank and his daughter, who my gaydar pegged as queer even before I knew she was rapper Bre-Z.

Cookie’s sister Carole figures out that Frank Gathers really is behind the roses that Cookie has been receiving. In a flashback we learn that their friend ratted Cookie out to Frank in jail after Frank had him beaten and tortured. Cookie finds a large gift with a bow on it at her door. When she gets in the house Carole is waiting for her. They open the box together to find their friend’s severed head inside, Godfather-style. Cookie visits Lucious in jail and asks him to “take care of it.” He responds by having a sit down meeting with Frank and then having him killed by other inmates, thus ending the short CB4 era on Empire.

Later that day, Cookie, Anika, Andre and Hakeem (on a hella cool hoverboard) do a slow motion stroll into the Empire board room to inform Jamal and the board about their hostile takeover financed by Mimi. They assure Jamal the point is not to take control from him but protect the company from Lucious. They arrive to find out that Mimi has double-crossed them and joined forces with Jamal and Lucious to maintain control going forward. Cookie charges the fiasco to Anika, who did actually sleep with Mimi and sums the whole mess up in one fabulous quote: “You can’t even dyke right!” 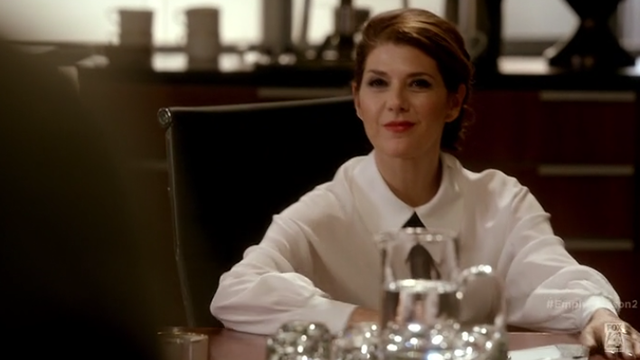 THIS IS THE WAY IT’S THE WAY THAT WE LIVE

This week’s episode was a good start and left so many questions for the writers to answer throughout the season. I admired their attempt to loop in the Black Lives Matter, even though I didn’t think the Lucious storyline was a good way to do it. I felt it played into the view that black men who brutalized or incarcerated deserve it. They had lots of celebs, which was fun and we cannot forget the super gay meeting Jamal had with Lawrence from Fashion Queens. Lawrence SLAYED the song “You Make Me Feel Mighty Real” by legendary disco queen Sylvester. I’m looking forward to a fun roller coaster this season! Follow Hashtag #autoempire to tweet your thoughts on this week’s episode of Empire. 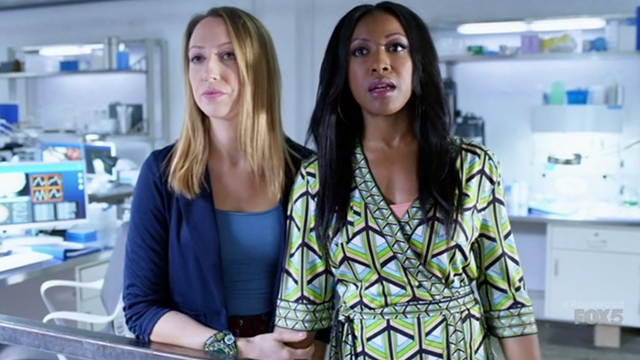 I think your mom would love us more if we got some babies like Stef and Lena.

It seems like Bones would be an easy show to replicate, but Fox has never been able to do it, no matter how many backdoor pilots they try to spin out of a series that is now entering its eleventh season. That show has survived its will-they/won’t-they romance by answering the question with a resounding “I do!,” a dozen time slot shifts, killing off more than one beloved character, and a complete inability to gain traction on social media. Bones should have plummeted in ratings and been cancelled years ago, but it LIIIVVVVES.

Rosewood is Fox’s latest attempt to recapture the Bones magic and while it doesn’t succeed right off the bat, there’s promise. Beau Rosewood is the Brennan of the show, only he’s a freelance pathologist. Detective Annalise Villa is the Booth of the show, a hard-working police detective shouldering some shame about her past. It’s gender-flipped Bones with two lead characters of color, and also it’s set in Miami, so it’s very bright and everyone is dressed like lawn flamingos the whole time. But the main thing about Rosewood is Beau’s two lab partners are his sister Pippy and also a woman named Kathy. They’re lesbian ladies engaged to be married! The show doesn’t dance around it or mask it; their sexuality is a huge part of their characterization from the moment they appear on-screen.

Another solid bonus for this show is that Lorraine “Vee” Toussaint plays Beau and Pippy’s mom, like she plays Lena’s mom on The Fosters! 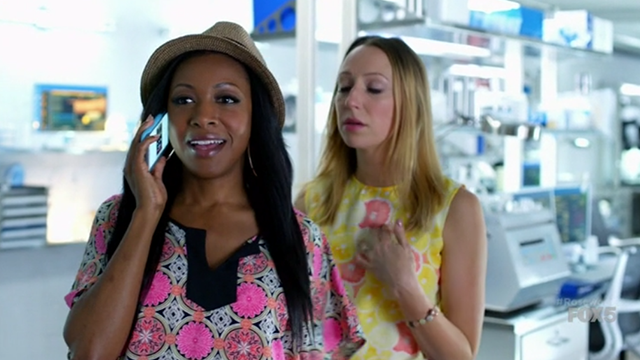 Hello, yes, I would like to order one hundred foster children and one jackass entitled son, please.

You’ve seen this pilot episode a hundred times in your life, I don’t need to describe it to you. It’s going to be a case-of-the-week series where Villa wants to play by the rules and Beau arrogantly assumes he knows better and convinces her to go off-book. Sometimes he’ll be right. Sometimes she’ll be right. They’ll kiss in the season one finale (if the show makes it that long), and Villa will shut it down because they’re partners, you know? They respect each other too much to have a fling. (But it will be more than a fling to him, can’t she see??)

But in between that age-old structure, there’s a chance we’re going to get some lesbian adorableness with Pippy and Kathy. Pole dancing classes for their honeymoon was a thing that came up this week. “Sugar bear” is a thing one of them called the other one. It’s actually a pretty huge deal that Fox greenlit this show with those two queer women front-and-center like that. I’m cautiously optimistic about where it will go.

Grey’s Anatomy + How to Get Away With Murder

These two shows will be folded into Boob(s On Your) Tube going forward, but for today they made an appearance in their own article, celebrating the return of TGIT with such queer style.