Last night a cultural moment of epic proportions happened on Saturday Night Live, perhaps you were watching? Chances are that you were, it was SNL’s highest rated night in 18 months! We saw you on Twitter, transcribing the episode for everyone else who was also transcribing the episode on Twitter. Seriously was anyone doing anything else last night (besides Technostraddle editor Taylor, who was launching her third tumblr, doodleshroom): 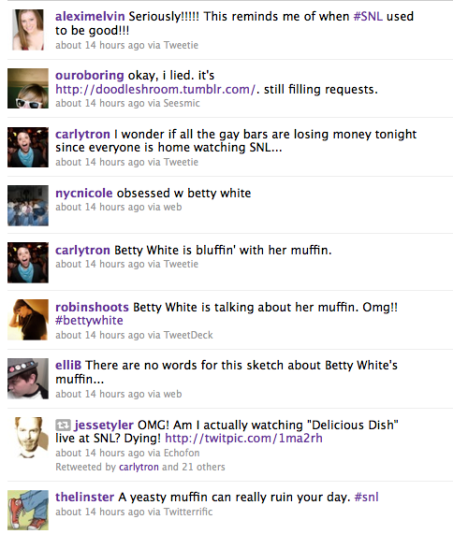 Let’s review: Betty White opened by thanking the Facebook campaign that landed her on the show, and just when you thought there weren’t any more funny jokes to be made about Facebook, you forgot about 88-year-olds making jokes about facebook:

“I have so many people to thank for being here, but I really have to thank Facebook. When I first heard about the campaign to get me to host ‘Saturday Night Live,’ I didn’t know what Facebook was. And now that I do know what it is, I have to say – it sounds like a huge waste of time.”

The cold open introduced us to a lady-reunion of epic proportions and Kristin Wiig at her squirelly best. Lawrence Welk opener:

The Mother’s Day special brought back some of our favorite SNL alums; Tina Fey, Maya Rudolph, Amy Poehler, Ana Gasteyer, Rachel Dratch and Molly Shannon. The only things that could’ve made that line-up even more monumentally Girl Powery and exciting would’ve been:

Now, if you so desire, you can watch the entire episode on Hulu! Or you can watch Jezebel’s recap with appropriate skit videos of the episode.

Or you can watch what we were watching last night (while constructing the NSFW Sunday of course), FOOD INC, which scared the shit out of us.

What did the rest of the world think about this epic television moment?

USA Today: “Saturday’s overhyped NBC broadcast mostly served to explain why SNL seemed so reluctant to bring White on board. Clearly, they didn’t know what to do with her.“

Los Angeles Times: “Indeed, the most common way to have fun with old people on TV or in film is to have them act as if they were young people. Making them talk about sex or swear, or take drugs, or use language they’re the wrong age to use is an easy laugh that contemporary comedy writers do not seem able to resist or improve upon, or think up alternatives to.”

The New York Times: “Historically, “SNL” doesn’t always come through for its most heavily hyped hosts… but Saturday’s show was one of the strongest outings of the season. With energy, enthusiasm and plain old laughs, Ms. White and the “SNL” cast and crew (including an ensemble of recent alumnae) more than delivered on this much promoted episode’s promise.”

Entertainment Weekly: “After months of grassroots campaigning, White’s appearance was its own reward: The audience was applauding as much for itself and its pop-culture populist power as it was for White herself.”

Jezebel: “But perhaps the best part of the show was that it reminded the audiences at home that Betty White is not just some 88-year-old woman who can get laughs by saying dirty things (though that seemed to be the basis of several skits); she’s also a brilliant comedian, with killer timing and the ability to keep up with—and outshine—people 60 years younger than she is.”