Another week, another jam-packed episode of Batwoman! We have a lot to cover so let’s jump right in, shall we?

There’s no “previously on” this week, but that’s okay, because it means we’re treated to the absolute joy of watching new roomies Alice and Sophie engage in the age-old roomie tradition of movie night. (Have we…seen Sophie’s place before? If we have, I surely don’t remember, but that exposed brick is to die for!) The two are in normie clothes watching a horror movie (incredible set-up for the rest of the episode if I do say so myself), and Alice is adorably terrified. They hear a noise on the balcony, grab empty bottles to attack the intruder, and quip about how Alice drank Sophie’s good wine that I assume she was saving for an eventual Wildmoore date night. 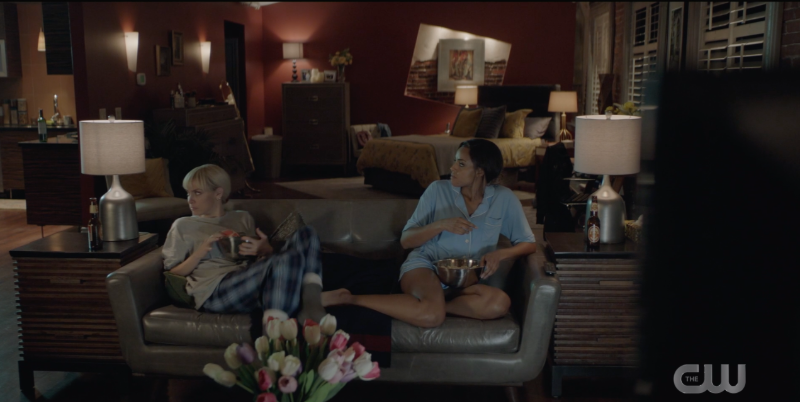 Speaking of Wildmoore, the intruder is none other than Ryan, who seemingly got the memo about everyone in the CWDCTVLGBTQ universe traveling via balcony. She’s there to pick up Alice to investigate a lead from Montoya. I swear, this pairing of Alice and Sophie is already giving what it needs to give, and I really hope we get more of these two because Rachel and Meagan’s comedic chemistry is GOLD.

Alice and Ryan arrive at a crime scene where a man is wearing a pink feather boa and strung up by what Montoya believes to be Catwoman’s whip. Ryan thinks it’s fake because there’s no way a whip infused with Wayne tech could be destroyed by a mere pocket knife. Alice has no problem letting Montoya think it’s real because the faster they finish this assignment, the faster they can get on with their lives. Ryan intends to do just that though, because she entrusts the handling of the vic to Mary since homegirl has dinner plans with her mother!

At Wayne Enterprises, Ryan is on the phone attempting to calm investors when Mary comes in waving the dinner invitation from Jada around. As she runs down all the reasons this dinner would be a bad idea, including Jada possibly uncovering Ryan’s secret identity, she gets incredibly thirsty and chugs all the water she can find. Much like, I don’t know, one would water a plant???? I noticed that Mary’s wardrobe and makeup were both getting greener, but what I didn’t catch on first or second watch was that her fun buns were an homage to Uma Thurman’s Poison Ivy! This show just gives and gives and gives. Despite Mary’s worries, Ryan informs her that she’s going to the dinner and plans to bug Jada’s office to get some dirt on her mother.

Back at Sophie’s loft, Alice is giving Sophie shit about being Ryan’s date to dinner tonight as Sophie frantically gets ready as if it is, in fact, a date. Ms. Moore is rocking a FLY orange dress, a pushup bra, and the nerves of someone presented with the very real possibility that the feelings they’ve been trying to push down just might find their way to the surface. And another thing, good luck trying to convince me that Sophie didn’t get all those plants as a way to have something other than Batdrama to talk to Ryan about. Who among us hasn’t developed a deep interest in our crush’s favorite hobbies?! Anyway, Alice is living her best life right now; her meds are working and she’s hallucination free, so the last thing she wants is to be dragged away from her “vacation”, but dragged away she becomes, because Montoya calls her in to the office.

“This is how I always get ready when I’m doing recon at my crush’s birth mother’s house.”

Ryan and Sophie arrive at Jet Manor and y’all, the way I gasped upon seeing these two beautiful Black women dressed to the nines, standing next to each other with a height difference that continues to attack me every week?!?! We deserve this. We truly do. Ryan is incredibly uncomfortable in the house with the butler and the chandelier and the winding staircase, and Sophie assures her that it’s just a power play to get in Ryan’s head. Both of these women are strong in their own right, and they both have these moments of vulnerability with the other. Recently, it’s been Ryan letting Sophie see through the cracks of her hero exterior where self-doubt and insecurity lie in wait. And every single time, Sophie is right there to reassure Ryan that she is enough, just the way she is. Meagan and Javicia are so good at subtly amplifying those small moments in ways that make this burgeoning relationship feel real and earned.

“What did I tell you on the way here?”
“You is kind, you is smart, you is important.”

Lady Jet struts down the stairs and is a bit taken aback by the presence of an uninvited guest. Before Ryan can introduce Sophie, Soph introduces herself AS RYAN’S GIRLFRIEND! THIS IS NOT A DRILL, FOLKS! WE HAVE FAKE DATING! I REPEAT, WE HAVE ONE OF THE BEST FANFIC TROPES IN THE SHOW CANON! Fake dating leads to the discovery of real feelings leads to confessions of love leads to happiness and happy people just don’t kill their husbands! Huh, that one got away from me there, sorry y’all.

As if the show could sense I was becoming unhinged, they bring us back back to earth with a jarring scene of the chef creepily getting dinner ready by chopping the head off a pig and laughing maniacally. Casual.

Meanwhile, Sophie and Ryan are regaling Jada with the tale of how they got together, and they’re scarily on the same page. It was obviously a Taco Tuesday (GAY), and it involved Sophie saving Ryan from choking on chips, or something.

Jada, playing the role of caring mother, remarks on how beautiful their story is, and Ryan agrees that it’s so special when you find that person, and she knows that she can always count on Sophie to be there for her. You know, like if Ryan was dying and Sophie wrapped her arms around her and reassured her everything would be okay. Hypothetically, of course. Sophie excuses herself to find the bathroom and I assume releases the breath she’s been holding since Ryan looked her in those gorgeous brown eyes.

When the fake dating gets a little too real…

Ryan’s done playing nice with Jada and wants to know exactly why they’re having this dinner. Jada doesn’t pull any punches and warns Ryan to shut down whatever she has going on with Marquis or she and everyone she cares about will suffer. And speaking of Marquis, he suddenly shows up to the house with a guest of his own, and he’s furious with Ryan for not telling him about the dinner.

This is also how I look at men who question me.

Meanwhile, Sophie’s snooping upstairs to find Jada’s study and plant the bug. She has Luke on comms and gets everything set up, before taking an extra minute to examine a photo of Jada and Marquis that’s on her desk. She discovers the hidden part of the picture showing Jada’s ex-husband, and before she can get Luke his photo to run through facial rec, the comms feed goes offline. Sophie rushes out, but not before Jada catches her in what is very clearly not the bathroom.

At City Hall, Alice and Montoya talk through the situation with Catwoman’s fake whip and, well, Montoya talks about it. Alice wants to dig into Batman and Catwoman’s sex life, including the most perfect burn about not thinking heroes did things like that (IYKYK). Montoya’s frustrated about the fake whip so she cracks a beer and puts Alice to work sorting through files to find the culprit. No one seems to fit the bill (though there are some nice Easter eggs, like Talia al Ghul), until Alice notices a file much larger than the rest; a file belonging to one, Poison Ivy. She calls out Montoya on their actual mission being to find the viny vixen.

“Damn, I thought I was so subtle…”

Back at the most awkward dinner to ever dinner, Miss Zoey takes it upon her (white) self to give everyone at the table a lesson on modern family dynamics, per her dissertation, because of course she does. It’s the caucasity for me, your Honor. She excuses herself, and Jada and her kids get into it about trust and the fact that Sophie was snooping around upstairs. Ryan takes this moment to thank Jada for giving her up because even though she wasn’t rich, she traded in that silver spoon for a home and love and a real mother. And whew, that one looked like it might have actually punctured Jada’s ice cold exterior.

Every single one of them is like, “did this yt girl really just…?”

Meanwhile, Zoey’s in the bathroom and can’t feel or move her arms. Suddenly, a man in a pig mask appears behind her and in a twist from classic horror tropes, random white Zoey is the first to die. I love that these writers are like, enemies to lovers? Yes; fake dating to real dating? Yes; a Black person dies first in the horror episode? ABSOLUTELY NOT!