Detective Renee Montoya, along with the probably queer villain Harley Quinn, is one of the few characters created for Batman: The Animated Series that was popular and well-written enough to make the jump to the comics. Now she’s making another jump, this time back to TV, as she’ll be playing a prominent role in this fall’s new show Gotham, where she’ll be played by actress Victoria Cartegena.

Cartagena was listed as a guest star in the pilot, but has been bumped up to a series regular now that the series has been picked up. If you know her from the comics, you know that she’s a total badass. She’s not only a detective in probably the most dangerous and crime-plagued city, but she’s also a lesbian of color who has done everything from being the superhero The Question to dating Kate Kane, also known as Batwoman. The inclusion of Montoya in Gotham is very exciting news for comic lovers, television lovers and lovers of positive media representation for queer women of color.

Montoya, with Kate Kane, in the comics. Art by JH Williams III

Gotham is one of this fall’s most highly anticipated new shows, even being called the most promising new show by the Television Critics Association. It stars Ben McKenzie as a young Detective Jim Gordon in the Gotham City Police Department back when Bruce Wayne was still a child and not yet Batman. Joining Gordon and Montoya in the Gotham PD are Harvey Bullock, played by Donal Logue, Crispus Allen (who was Montoya’s partner on the force in the comics) played by Anthony Stewart-Jones, and Captain Sarah Essen, another woman of color, played by Zabryna Guevara. Several classic Batman villains make appearances as younger pre-big-name-villain versions of themselves, including The Riddler, Poison Ivy, Catwoman and The Penguin. Jada Pinkett Smith rounds out the cast as the crimelord Fish Mooney who was created for the show and will be a major villain. 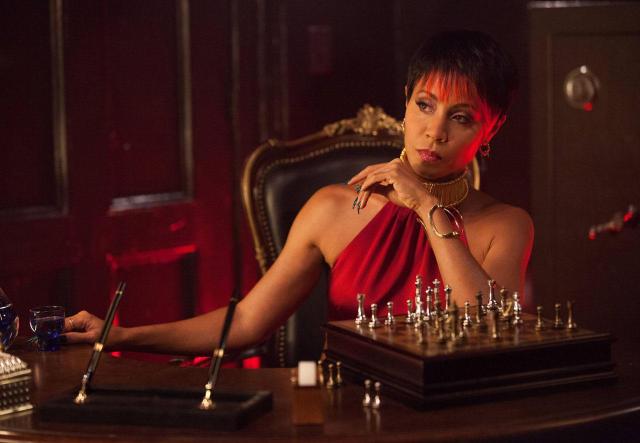 It’s nice to know that Montoya will be openly lesbian on the show, and hopefully, she’ll even be shown in relationships with other women. Pinkett Smith told the Advocate, “It’s a new day when we can have a show on television that is not afraid to explore various sexual orientations of women… Let us hope that this is a path toward even more change in regard to the perceptions of female sexuality, as well as our bodies in relation to sex.” This is a very high profile show, and Montoya has a chance to reach countless queer women of color. Cartegena knows this.

Growing up, I rarely saw people of color or gay people depicted in a positive light, and I know when you don’t see yourself reflected in the world around you, it does things to your self-esteem. I know if I had seen a character like Renee on TV when I was younger — a Latina who is smart, powerful, and strong — it would’ve encouraged me to dream bigger. So I know what she means to people, and if watching me means that I can help someone else feel included, than that makes me very happy.

This is especially welcoming news, as another show based on a DC comic this fall, Constantine, announced that their canonically bisexual lead character will be straight in the TV show because “…within this tome of three decades [of comics] there might have been one or two issues where he’s seen getting out of bed with a man. So [maybe] 20 years from now? But there are no immediate plans.” Because that’s obviously how being bisexual works. Even though having a lesbian character doesn’t make up for this bisexual erasure, it’s good to see Gotham isn’t making the same bad decisions Constantine did. 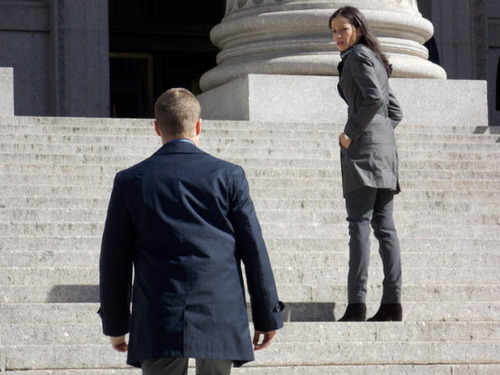 Montoya with Jim Gordon via dcwomenkickingass.tumblr.com

Cartegena’s Montoya joins Caity Lotz, who plays Sarah Lance,  Arrow’s version of the superhero Black Canary as an openly queer woman on a DC Comics-based TV show. On the Marvel side, the queer-in-the-comics character Victoria Hand appeared on a few episodes of Marvel’s Agents of S.H.I.E.L.D. but was (SPOILER ALERT) never said to be queer on the show and was unceremoniously killed off.

Montoya doesn’t seem to appear much in the previews, but that could be because she was only a guest star at first. I think it’s her back that is to the camera when Harvey Bullock is talking at 0:43 seconds in this extended trailer. You can check out Gotham when it premieres on Fox on September 22.