By now, I’m sure you’ve heard of Australian Prime Minister Julia Gillard’s smackdown on Opposition Leader Tony Abbott. If you haven’t, catch up below. You will absolutely not be upset you spent fifteen minutes watching it or reading the transcript. If it’s clear to us that Gillard’s speech was amazing, then why are people attacking Gillard for being a hypocrite and saying she has damaged her own integrity?

First, some background on this speech and the issues surrounding it: Speaker Peter Slipper was recently caught saying some pretty sexist and terrible things in text messages to advisor James Ashby. These messages are problematic and have led to a lot of discussion recently regarding whether or not to dismiss Slipper, and Abbott himself has gone on record talking about how disgusting Slipper’s misogynist texts have been and how Parliament needs to do something about it. Well, that’s all fine and good, except there’s already a court case against Slipper for sexual harassment from Ashby. Slipper has since resigned from his position as Speaker.

It isn’t a Parliamentary issue. Claiming it is Parliament’s place “to judge Slipper when there is a court case in motion sets a dangerous precedent and makes a mockery of what Parliament is for.” No one was in support of Slipper’s text messages, they were in support of separation of powers. Parliament and the Judiciary system are two separate powers, just like the United States’ Executive and Judiciary branches. Key word: separate. Because it is a Judiciary matter now, it isn’t a Parliamentary matter. Gillard wasn’t ignoring the Slipper issue. Slipper made some terrible comments about vaginas, but Abbott has the potential power to make terrible laws about vaginas. That’s what Gillard’s speech was about. 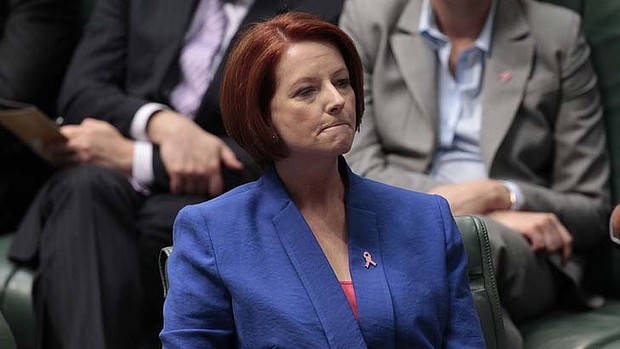 Pinpointing exact sexist comments made by Abbott in her speech was sheer genius, especially considering Abbott’s wife tried to label him a feminist earlier this week. Honestly, I read that article thinking that it must have been from The Onion. Perhaps this new feminist-Abbott angle inspired Gillard’s speech, referencing quotations from Abbott himself:

He has said, and I quote, in a discussion about women being under-represented in institutions of power in Australia… The Leader of the Opposition says “If it’s true… that men have more power generally speaking than women, is that a bad thing?”

And then a discussion ensues, and another person says “I want my daughter to have as much opportunity as my son.” To which the Leader of the Opposition says “Yeah, I completely agree, but what if men are by physiology or temperament, more adapted to exercise authority or to issue command?”

Nevermind the fact that Abbott has been extremely outspoken about women’s reproductive rights and health, especially in reference to a blanket abortion ban. As Corrine Grant of The Hoopla points out, Abbott has given speeches claiming that “abortion is the easy way out”, has tried to prevent access to Gardasil (the cervical cancer vaccine) and voted against easily accessible RU486 (the abortion pill). Yet, Gillard is getting the backlash from the media.

The Australian media has latched onto the strange idea that because Gillard didn’t vote in favor of dismissing Slipper, that she is a hypocrite who can’t possibly be for women’s rights. Apparently, she doesn’t respect women enough to dismiss Slipper for his sexually harassing texts, but Gillard wasn’t making a speech about Slipper. She was making a speech about the hypocrisy of Tony Abbott calling himself a feminist in the wake of the Slipper case.

Perhaps the most upsetting critique of Gillard’s speech comes from Peter Hartcher of the Sydney Morning Herald. In his opinion piece, he says, “If there was one thing that should have been different about Gillard’s prime ministership, it should have been that Australia’s first female prime minister should have been a flag bearer for women.” In what way is Gillard not being a “flag bearer for women” by calling out the Opposition Leader’s extensive track record of misogyny? Was it when she voiced her opinion from a woman’s perspective or maybe when she said it was hurtful that the Liberals have attacked her family in the past? 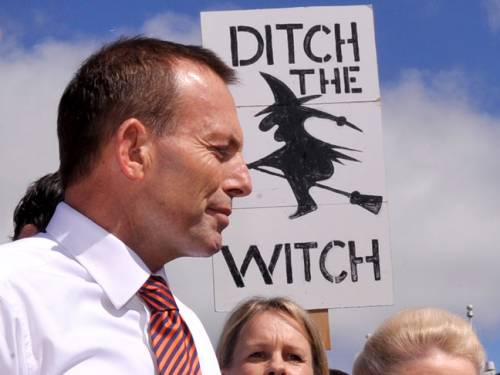 Tony Abbott is totally a feminist
via {SBS}

I’ll be the first to admit that Julia Gillard hasn’t always been my favorite person. I found it unsettling when she took over power from Kevin Rudd, but I had high hopes for her as the first female Prime Minister of Australia. Although she lost some points with me by saying she wasn’t in favor of marriage equality, I still support Labor’s decision in focusing on Slipper’s case as a judiciary matter, not a Parliamentary one.

There seems to be a “boys club” mentality in Australian politics, this week’s Q&A assured me of that, whether they admit it or not. Calling that out does not diminish Gillard’s credibility as a leader. I don’t find it surprising that male journalists have been the majority behind the Australian media’s major backlash to her speech, but I am left questioning if we even watched the same speech.