For most of my life, I have been loudly introducing my ethnicity. It usually starts because of my name. After it gets mispronounced a few times — Kirsten? Kristen? Katharine? — there is almost always a comment about it being “unique” or “exotic” followed by a perplexed look and me explaining that my name is Punjabi because my dad is from — surprise — Punjab, India.

On the one hand, part of me appreciates these conversations. They are a jumping off point to explaining my racial identity because it’s not readily apparent. It gives me a moment to explain how my dad emigrated from India, arrived in Canada, and eventually met my mom. But at the same time, I envy people who don’t regularly get a mini interview just from announcing their name. And while I understand the enormous privilege I have from being white passing, sometimes I wish I didn’t have to explain my ethnicity to anyone and that it was apparent just by looking. Instead I often feel like I have to prove my ethnicity and while I am happy to share a photo of my parents at their two weddings, one Sikh, one Anglican, it can be a little exhausting.

Growing up biracial has felt like one long balancing act. At 16 I was on vacation visiting my dad’s side of the family. The entire trip had felt fraught with racial tension. Somehow being amongst all of my cousins I felt like I didn’t belong — to this day I joke that I am the “white sheep” in the family. I was the only one who doesn’t speak Punjabi beyond a few words and their constant jokes about “goras” felt like a personal attack (though, now, as an adult I understand that it wasn’t, and instead was a response to the frequent racism that they dealt with from white people). My uncle ranted that bringing up his children in Canada had left them disconnected from their heritage and that they couldn’t even name different types of daal — ironically that was one thing I could do. The subject of “losing your culture” came up over and over again as though living in Canada meant that my family had to give up every aspect of their Indian identity. 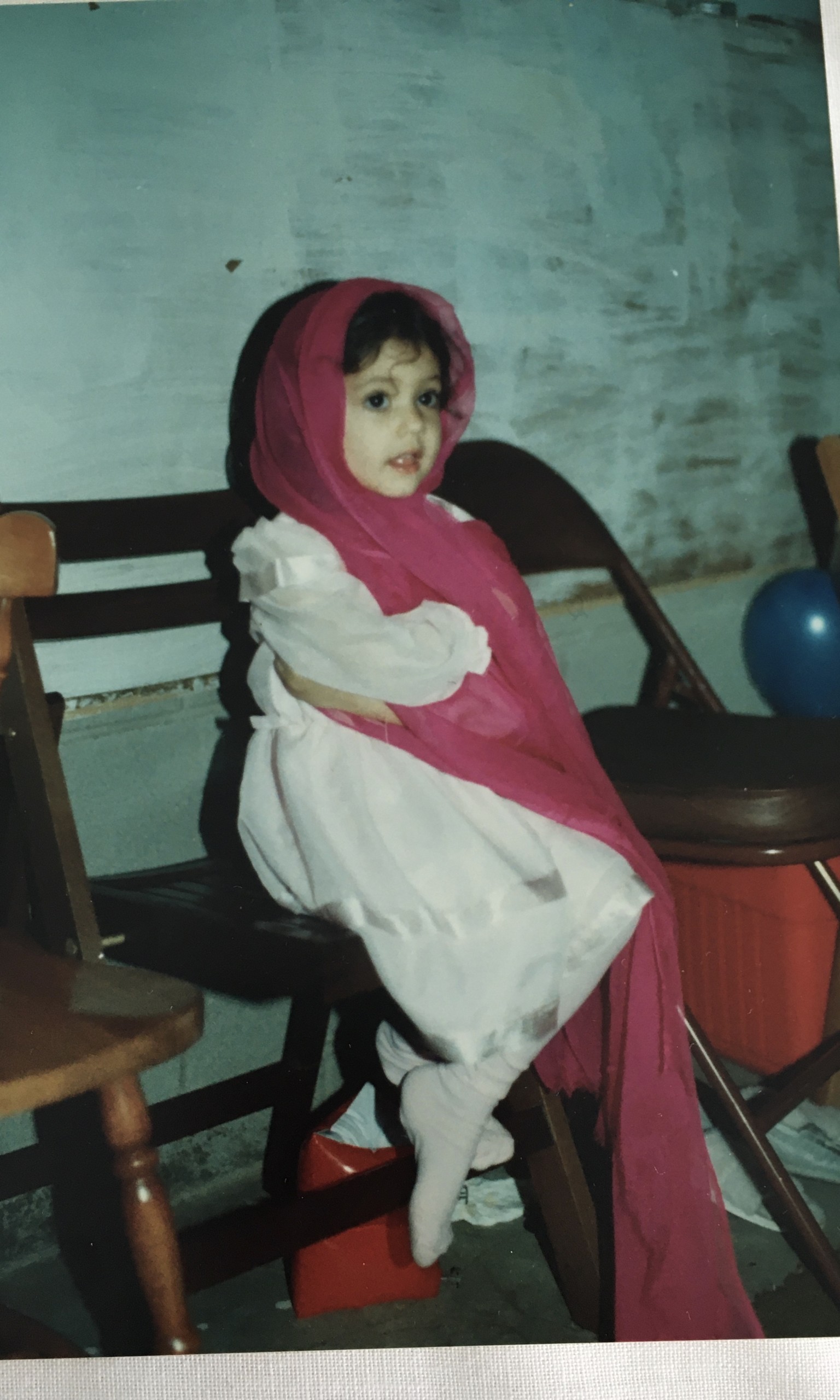 Photo of Kirthan as a kid, via the author.

At one point a very distant relative asked me if I was “white washed.” I didn’t know how to respond. I already look white. I am part white. Admittedly most of the culture that I consume is from white people. I grew up listening to grunge and alternative music, a genre that is overwhelmingly white. And while some of my favourite TV shows have been lauded for having diverse casts (thank you, Brooklyn Nine-Nine), most of Hollywood still puts white people front and centre even in roles that are meant for people of colour — looking directly at you, Scarlett Johansson.

But does that negate all the Indian culture that is such a deep part of my identity? Does it erase the hours spent trying to learn Punjabi, the weekends spent at gurdwaras and reception halls in Brampton and Mississauga? What about the Indian friends that were practically family? Did they not count either? My upbringing was a mix of mainstream Western culture on one hand, with Punjabi food, music, and movies, on the other. Just to make things more complicated, my dad had taught my mother how to cook so all of the daal, roti, sabzi, and saag that I grew up eating night after night was actually cooked by the only white person in my family. I had no idea how to answer that question in a way that wouldn’t feel like I was betraying some part of my identity.

Being asked that question is not only insulting but it’s impossible to answer. Am I supposed to choose between my mother and my father? Am I supposed to pick only one ethnicity out of the two that make me and ignore the other? How can I pick one when I am always both things? It is not a switch that I can turn on and off. When I am around Indian people I don’t suddenly become 100% Indian. When I am around white people, I don’t become 100% white. I am always me and I will always be both.

Strangely enough, it is often when I’m only with one group or the other that it feels like my ethnicity comes into play. Around Desis my difference is obvious. Almost every time I am at a party wearing traditional Punjabi clothing I wonder if someone thinks I’m just a white girl playing dress up. But being around groups of just white people is tricky. It seems that when you get a lot of white people together there’s always someone who takes it as an opportunity to casually reveal that they are racist. I can’t count how many times I’ve had to speak up when an acquaintance of mine would randomly drop a slur against South Asians and then react with shock when I explain my background.

Being asked to choose feels as though I am expected to erase a part of myself and discard it, as if it were worthless. I could easily go through life as a white woman but I know it would wear on my soul to deny my Punjabi roots. At the same time, I don’t want to pretend as though I am all Indian all the time. My mom’s English-Scottish heritage might not be as exciting to most people, but it’s equally important to me. I want to feel tied to both cultures and I’ve finally realized that I can take my time with each one. As with all things, one side is not more worthy than the other. It all matters. It’s all equal.

While I came to this conclusion about my ethnicity several years ago, it’s only recently that I realized this way of thinking also applies to my sexual identity. I’m bisexual. I’m interested in men, women, trans and non-binary people. But while my ethnicity has always been a straightforward fact, my sexual identity took on a much different learning curve.

I didn’t come out as bisexual until I was 32, in part because it took me that many years to realize that my sexuality was real. I spent most of my life being attracted to men and believing that my attraction to other people was just curiosity. After all, in the late 90s and early 2000s, bisexuality was generally regarded as either a passing experiment, being in the closet (ie. the belief that most bi people are actually gay and just afraid to fully come out), or non-existent (dishonorable mention to Sex and the City for having an entire episode dedicated to questioning the orientation of a bisexual character).

When I look back at the years in which women, in particular, were labelled “bicurious”, told that they were just “pretending” as a way to attract men, or that they were going through a phase, it’s no wonder I was so confused. It was that kind of thinking that made me spend years telling myself, “Sure I’ve had sex with women but I’m mostly straight!” I can’t count how many times I had an experience with a woman only to come up with some sad reason that it didn’t count and I wasn’t “really” queer.

After watching Cruel Intentions a few too many times, my first kiss with a girl at age 14 left me wondering if maybe we were just practicing or treating it like a one off experiment. Years later I found threesomes to be a comfortable way to explore having sex with women but somehow decided that the mere presence of a man discounted anything I had done with a woman (does eating pussy really count if you’re being fucked by a dude at the same time?) It still took several years after sleeping with women one on one to make me realize that I am, in fact, queer as the day is long.

Oddly enough the same thinking that helped me make peace with my heritage — acknowledging that I am both Caucasian and South Asian at all times — somehow didn’t always translate to my sexuality. I genuinely thought that I had to be equally attracted to the same gender and other genders to be a “real” bisexual. Instead my attraction varies widely. At times I feel like I’m boy crazy and I’m only a little attracted to women. Other times I feel queer as fuck but in the back of my mind I know that I still have some attraction to men.

My sexuality is completely fluid, ebbing and flowing in ways that are a mystery even to me sometimes. The only thing I know for sure is that just like my ethnicity, my sexuality is real and it is valid. I don’t have to quantify it or prove it in any way. Instead I literally go with the flow. I go out on dates with whomever I’m interested in, I hook up with the people I find attractive. I’ve finally started to feel like I can take up space in queer settings without feeling like a tourist. As I’ve learned to embrace my queer identity, it finally feels like a real part of who I am.

While I have enormous privilege in being both white passing and straight passing, these elements that make my life easy in many ways also cause me to feel like an imposter in my own communities. Although I don’t speak Punjabi, I do know what’s being said when people stare at me and murmur, “What’s that gori doing here?” every time I’m at a function. As much as I wish I could reply with a snappy comeback, I’ve found that ignoring the comments and having a good time is the best thing I can do for myself. If people are going to make assumptions about me, I’m not overly inclined to reach out to them. Instead I find my friends and family and spend time with the people who welcome me as I am.

As far as my sexuality goes, I am certainly not the first bisexual woman who has fretted over being “not queer enough.” While it’s somewhat frustrating, I have decided that the best way to feel confident about my identity is to announce it whenever I get the chance. Online meme culture has had a surprisingly positive impact on how I represent myself. I share jokes that question how a bisexual person can be attracted to everyone and yet be perpetually single. In person, I correct people when they assume that I am only dating men. These acts are small but doing them over and over helps me to convey who I really am. I note my queerness and ethnicity whenever and wherever I can. I use it to start conversations, mostly so that other people who are in the same boat know that they aren’t alone.

I have finally learned to accept all aspects of myself. Perhaps my identity oscillates at times but in a world that attempts to force me to choose one side of a binary, I remain firmly in the middle. I cannot and will not choose just one thing. I won’t erase any part of me. After years of struggling to answer the question, “What are you?” I have finally realized that I have an answer. I am biracial. I am bisexual. I am complete.

sign up for our newsletter
Related:In Another Worldthe speakeasy

Kirthan has written 1 articles for us.