In football, All-Americans are amateur players in high school or college who are deemed to be the best at their positions. When the CW’s All American wrapped up its inaugural season, the show’s star, Spencer James, was well on his way to earning the designation on the gridiron. But All American is also a euphemism that we use to describe a certain kind of girl…the unconventionally beautiful, slightly tomboy-ish, fiercely loyal, girl next door. They pine secretly for the town bad boy or the star football player and unwittingly find themselves caught in a love triangle that no one expects them to win but they ultimately do. Think Joey Potter from Dawson’s Creek or Mary Camden on 7th Heaven.

But rarely, if ever, in the depiction of “All-American girls” on television has that character been black.

And rarely, if ever, in the depiction of “All-American girls” on television has that character been a black lesbian.

And never, ever ever, in the depiction of “All-American girls” on television has that character been a black, masculine of center lesbian.

In its first season, All American devoted itself to expanding our narrow definition of what it means to be an “All American girl.” Tamia “Coop” Cooper is the unconventionally beautiful, (more than) slightly tomboy-ish, fiercely loyal, girl next door…or at least she was until her mom kicked her out of the house for being gay. Instead of pining for the star football player, she’s his chosen family, serving as his ever present support system and confidante. There is no love triangle — though Coop does find love with a bohemian songstress from her mom’s choir, Patience — only the constant struggle of being true to yourself or giving in to conventional wisdom. Coop is an All-American girl.

Beyond just redefining what it means to be “All American,” this show also gave us one of the most groundbreaking depictions of a black lesbian on network television ever. Few other shows are offering their lesbian characters consistent screentime, actual character development and a love interest that’s on equal footing with the straight love interests. All American is setting the standard for queer storytelling on television and others would do well to follow in their footsteps.

That said, I’m a bit remiss that this is the episode with which we start our regular recaps of All American because, honestly, it was not the show’s best work. 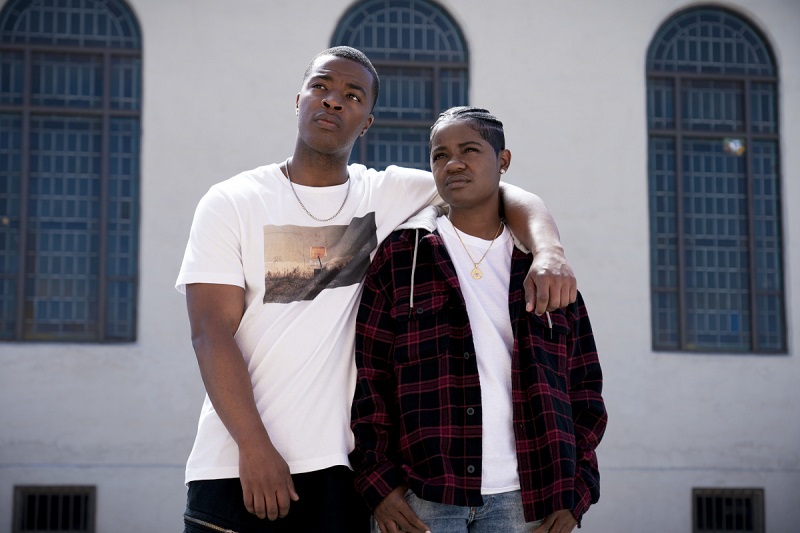 All American‘s sophomore season starts with Spencer and Coop paying their respects at a freshly painted mural of Crenshaw’s famous fallen son, Nipsey Hussle. Spencer hopes that Coop’s ready to put the gang life behind her but now that she’s gotten justice for Shawn, Coop isn’t sure what comes next. One thing is, seemingly, for certain, though: now that his father’s the new head coach at South Crenshaw, Spence is ready to leave Beverly Hills and come home. Coop urges her best friend to talk to his teammates in Beverly Hills before they start planning for next year.

This show is usually at its best when it showcases the friendship between Spencer and Coop but I find myself taken out of the moment — I literally rewound the scene a dozen times — by a misstep in the show’s timeline. Spencer rushes off to celebrate the state championship at an “End of Winter Break” beach party — which, I guess, is a thing you can do in Los Angeles — but Nipsey wasn’t killed until the spring. How do you memorialize a fallen hero who, according to the show’s timeline, hadn’t actually died yet? It’s at this point that I should’ve realized that this tribute wasn’t going to go the way I wanted.

Later, Coop happens upon Preach, who somehow survived that shooting from last season, doing rehabilitation exercises in the park. All of Coop’s calls and texts to Preach since his release from the hospital have gone unanswered and she’s dismayed by his coldness, especially given that she saved his life. Preach reminds Coop that it was because of her warning to Tyrone that he got shot in the first place…which is absolutely true. He issues a direct threat to Coop: “stay your raggedy ass the hell away from me.”

Preach isn’t alone in his condemnation of Coop; there’s a whisper campaign branding Coop as a snitch. She justifies her actions by noting that she didn’t go to the cops to save herself, she did it to save others, but it’s too late, the streets are already talking. As is her wont, Patience starts to worry about her girlfriend’s safety and, as is her won’t, Coop reassures Patience that everything will be fine. But when they walk up to her locker and find a threat tattooed on its door, both Coop and Patience look concerned. 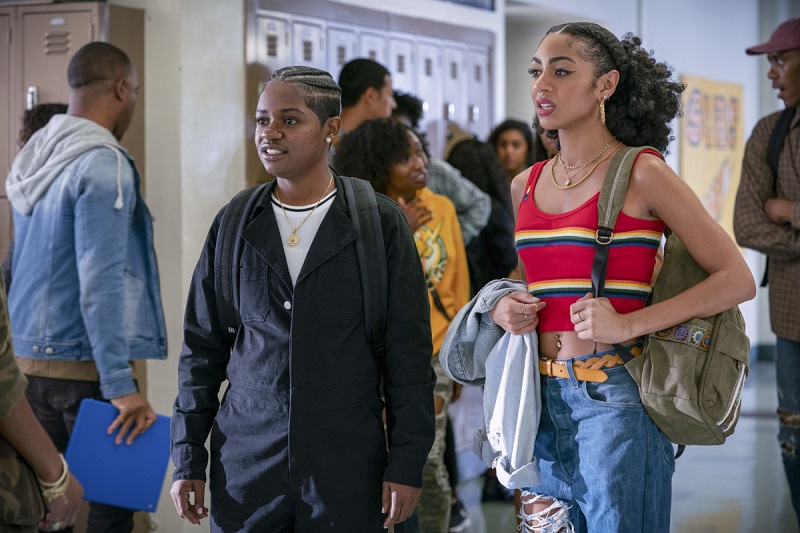 Coop faces a backlash from her classmates over her handling of Tyrone, much to Patience’s consternation.

Later at the Nipsey Hussle vigil, Patience wonders if it’d be safer for Coop if she just stayed home but Coop refuses to hide out. Spencer’s shocked at the developments but Coop claims she kept him in the dark so he wouldn’t get involved. She points to the gathering crowd, a mix of all races, religions, gang affiliations, all coming together to mourn Nipsey, and dismisses any suggestion that she ought to do otherwise. But as Coop and Patience are walking home from the vigil, their path is obstructed by a group of gangbangers who take issue with her decision to turn on Tyrone.

“If your ungrateful ass wanna jump me, for saving y’all damn lives, you can try, but what I’m not going to do is apologize for deadening Tyrone’s trigger happy rampage. Really, how many more brothers did Tyrone have to kill for it to be cool for me to turn him in?” Coop asks.

Her plea falls on deaf ears as the gang surrounds her and Patience, with their hands on their guns. Thankfully, Preach intercedes and urges the crew to fallback. He overheard her defense and — much to my surprise — he buys it. They live by different codes, Preach explains; his would’ve resolved the situation with Tyrone one way while hers dictated another way to end the violence. He seems to respect her decision but this is where they part ways: she and Patience will never be bothered by the crew again but, from now on, Coop needs to keep her distance.

It is, frankly, the best outcome that Coop could’ve hoped for but she looks melancholy as Preach delivers his edict. Patience asks if she’s okay and Coop assures her that she is. It’s time to move on to the next thing. 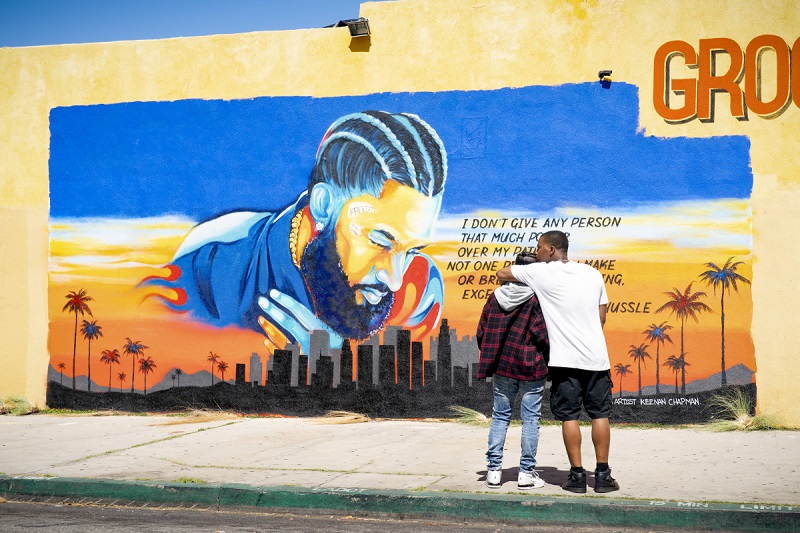 This mural was created, exclusively for All American and was taken down four hours after it went up.

Though Nipsey Hussle never got a chance to appear on All American — he was originally scheduled to be part of the season one finale — he was part of the show from the outset. His music was part of the soundtrack from the opening episode and his picture adorned Spencer’s walls at home…but more importantly, Nipsey was such an indelible part of Crenshaw that he became part of the fabric of this show. To ignore his death would’ve been malpractice on behalf of the writers.

It made sense that All American would memorialize Nipsey but this week’s episode didn’t just memorialize him, it lionized him…and while that’s to be expected to a degree, in the process, the writers did a disservice to one of their central characters.

The story of Nipsey Hussle’s life is one of growth. He built his reputation, first among Crenshaw’s Rollin’ 60s Crips, then in hip-hop, before parlaying his success into creating $210M of economic development for the streets that raised him. But the tragedy of Nipsey Hussle’s life is that a murderer’s bullet struck him down before he could grow with respect to LGBT issues.

“A major tension that many Black LGBTQ+ people are facing is that we often can’t depend on the larger Black community to have our backs in grappling with the queerphobia and transphobia exhibited by our own,” Out Executive Editor Raquel Willis wrote at the time of Hussle’s death. “Black cishet people are constantly swatting away critiques (large and small) of public figures who malign our part of the community.”

In the wake of Nipsey’s death, black queer folks were forced — once again — to mourn someone who saw liberation as a possibility for black people but not for us and to grapple with a community who’d rather lionize the dead than offer comfort to the queer living. That would’ve been Coop’s experience, that would have been Patience’s experience but, instead of addressing that complexity, All American avoids it: flattening out our pain so it is indistinguishable from everyone else’s mourning.

“It’s funny how folk look at our young black boys, our men. They don’t see us. They see their fears and their prejudices,” Flip says at All American‘s Nipsey Hussle memorial.

They don’t see us. Yeah, Flip, I know exactly how you feel.

+ Another missed opportunity for All American? According to grand jury transcripts, Nipsey Hussle was killed after a conversation about snitching — the very thing that Coop is accused of — escalated. Why not incorporate that information into the story? That said, I am not at all sad to see this gang storyline go, so I won’t belabor the point.

+ Fresh off her turn this summer as the first (gay) daughter of Atlanta in Ambitions, Kayla Smith is back on our screens as Rochelle Mosley, a recent Beverly graduate and aspiring sports agent, who I fear is going to cause more than a few headaches for Spencer this season.