This article was originally written in February 2009 for Riese’s blog, before the Autostraddle we know and love got invented. It has been reprinted here for you.

Hi! It’s me Riese. As you’ll see in 8 hours when I post the recap [UPDATE: 604 on Autostraddle and on The L Word Online] — this week’s recap is gonna be a little bit different. I’m not gonna recap any of Max’s scenes. This is ’cause I feel no representation is better than bad representation. I think this portrayal is intentionally defamatory and I don’t want to participate in it. (e.g., I’d prefer complete bisexual invisibility to A Double Shot at Love with the Ikki Twins.) So I have a letter to Ilene from Max Sweeney for you. 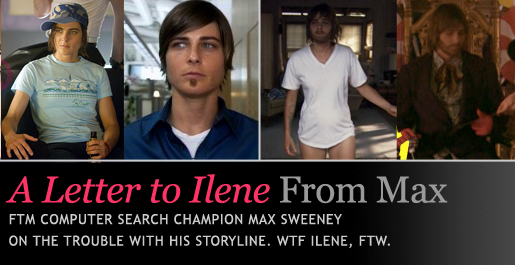 Before I begin — it seems many people don’t much care about Max anymore. He’s been so separated from everything else and most of y’all just wanna see Bette & Tina have babies and Shane fuck girls, so I’m fully prepared for no-one to read this or comment. BUT if even one or two people find this interesting, or disagree or agree, I’m really interested in your opinion! I only know so much! … and maybe even in doing a longer story on this topic at some point for a real publication.

Tonight’s episode (604) will focus heavily on Max and emphasize his “other-ness,” as exaggerated by the new RIPPED FROM THE HEADLINES pregnancy storyline.

“Trans people have the potential to transform the gender class system as we know it. Our existence challenges the conventional wisdom that the differences between men and women are primarily a product of biology. Trans people can wreak havoc on such taken-for-granted concepts as feminine and masculine, homosexual and heterosexual, because those words are rendered virtually meaningless when a person’s biological sex and lived sex are not the same. But because we are a threat to the categories that enable male and heterosexual privilege, the images and experiences of trans people are presented in the media in a way that reaffirms, rather than challenges, gender stereotypes.”

I haven’t written you since that mass email I sent out instructing everyone to call me Max instead of Moira but now I have some issues I’d like to get off my chest. First of all, I want you to remember that unlike the other characters I haven’t complained about anything this whole time, even you making me the only character on this show who has no interest in dating women, which is what the show is supposed to be about!

I felt like things started out okay. I was able to raise some important issues around class, for example. Things began to go awry when my transition began — I suddenly became conservative and abusive? — but things were getting better with us in Season Five. When Jenny called me “The Oracle,” I felt really cool, you know?  But now you’re making me pregnant? I’m upset. It seems like the only personality trait you want to give me is dysphoria. Yes, I experience it in droves. But my feelings about this pregnancy are not limited to “it makes me loathe my ‘womanly body’.” I’m upset ’cause the way I’ve been portrayed throughout this pregnancy seems to be an attempt to make me as “freakish” and as different from other characters as you possibly can, when I thought I came onto this show to be the opposite of that. This season, I’ll be physically playing out this imposed freakishness … to the max. Pun intended.

There aren’t many people like me on TV, so this is your golden opportunity to break barriers and explore some very interesting issues relating to gender, sexuality, and, yes, class. According to GLAAD’s annual report, I AM THE ONLY trans guy ON CABLE! But instead of integrating me into your show, you’ve progressively emphasized how my differences make me at odds with the lesbian community and you are now encouraging my violent self-loathing by bestowing upon me this outrageously uncomfortable pregnancy. My facial hair has evolved like a haphazard game of Wooly Wally. My wardrobe now consists of a cheap pregnancy suit and weather-immune grungy flannel shirts. I’m dating an external character three steps removed from the core cast (Bette –> Jodi –> Tom) who no one cares abut him either. I’ve become just another one of the dozen or so male characters who’ve started on this show, become assholes, and then disappeared. Clearly, that’s all men are capable of doing in your world. I agree that cis white straight men need to be taken down a few notches, but I deserve no such treatment.

Ilene, it’s really not likely that a trans guy regularly taking testosterone would accidentally get pregnant. I know you got excited when you saw that man on Oprah, but he did that on purpose, he’d actually been off T for a while and had gone off it specifically to enable pregnancy. Trans guys do have babies, but it’s generally quite intentional!

I’m really good-looking, regardless of gender, btw. It’s hard to ignore the additional damage you’ve done to ensure I don’t match up to the rest of the people on our WeHo Pretty People Party Show. You could’ve let me be a beautiful trans man comfortable in his own skin and instead you’ve made me look like Paul Bunyan with a potbelly!

Anyhow, taking testosterone during pregnancy can cause harm (birth defects) in the fetus. It’s possible that I would’ve miscarried by now! Besides, anyone as aware of their body as I am would’ve noticed these changes way before the four month mark. I’m hyper-aware of every centimeter added to my pectorals, I just might notice something happening in the abdominal area. Also — morning sickness, anyone?

So what’s going on? I’m a human, I’m not a blank slate for you to play out your fake acceptance while ridiculing me, ostracizing me from the rest of the cast, and continually burdening me with storylines that make me unrelatable, unlikeable, and at this point, unbelievable. By forcing this unrealistic story upon me, I can only conclude that you wish to make me as freakish as possible, to ensure no one walks away from this show thinking that there’s any place for trans people in popular LGBTQ culture or social life.

One of the intentions of increased visibility for marginalized groups is to make the majority aware that despite our beautiful differences, we share some common struggles. We’re all human, no matter what our labels are. Instead, you’ve gone beyond labeling me to stamping me, packing me up, and selling me to spruce up the garden.

I’d hoped perhaps you intended to give my pregnancy the same beautiful treatment you gave Tina’s — but no. There will be no transformation, this won’t enable growth or maturity. You’re just making me into a more depressed and lonelier asshole, like I’m being punished for wanting to transition. You’re also continuing to paint me as violent, another stereotype of trans men.

I want to fit in. I want to be happy too. I have more desires than “wanting to be a man,” that’s not my only personality trait. I can also want love, friendship, career success, Guitar Hero cheat codes, etc.

Sometimes I feel like I’m just this strange freakshow to you, like you may as well put me in a circus sideshow! I’m the Bearded Lady with the Baby! That’s stupid!

“Since transgenders in this culture are neither fairly nor accurately represented in the media, nor championed by a community, we develop our world views in solitude.”
–Kate Bornstien, Gender Outlaw

“Max was usually treated as an outsider in the story, and a fair amount of that bled onto me personally from a few people I had to work with.”
–Daniella Sea

“The freakshow motif was intended as an ironic reflection on the history of Cultural representations of transsexuality, which have always been imbued with an essential sense of freakishness and marginality.”
on Kate Bornstein’s play – Hidden: A Gender

“Gay brothers and sisters,…You must come out. Come out … come out only to the people you know, and who know you. Not to anyone else. But once and for all, break down the myths, destroy the lies and distortions. For your sake. For their sake …”
–Harvey Milk