I recently attempted to make a list all of the apartments, houses, condos, and weird rooms I’ve lived in in the past decade-ish of my life, and it proved an impossible task. I’ve simply lived so many places and moved so many times. I know I lived in nine different cities in my twenties, but I struggle to recall all the specific abodes within said cities. I did once live in a room in an apartment on Silver Lake that I found via a Craigslist posting that was so unhinged that the listing was actually featured on the Ellen Degeneres Show in a segment about, idk, WEIRD ROOMS FOR RENT. Perhaps one day, I will write an entire piece dedicated to that “room” (which was absolutely a converted closet) that was outfitted with floor to ceiling faux fur walls in zebra print so that it felt like I was living quite literally INSIDE a zebra, but today is not that day. Today is the day to process my most recent move — from Miami where I’ve lived for the past two years with my girlfriend on the twentieth floor of a high-rise building to a rental house with a lovely backyard in central Florida. I cannot wait to enjoy said lovely backyard on the regular, but for now I am still processing the move itself and all the curveballs it threw our way.

Even though a lot of those curveballs came from other people who are not me and my girlfriend — including an absolutely absurd and evil property manager who made this whole experience more hellish than usual — I have decided to focus on the lingering questions and critiques I have for no one other than me, Kayla Kumari Upadhyaya, a person who is well versed in moving and yet can’t seem to channel anything other than disaster vibes when it comes to an actual move.

Here are some very important questions I have for myself in the immediate aftermath of moving:

1. Why do I own no less than six pairs of opera gloves? 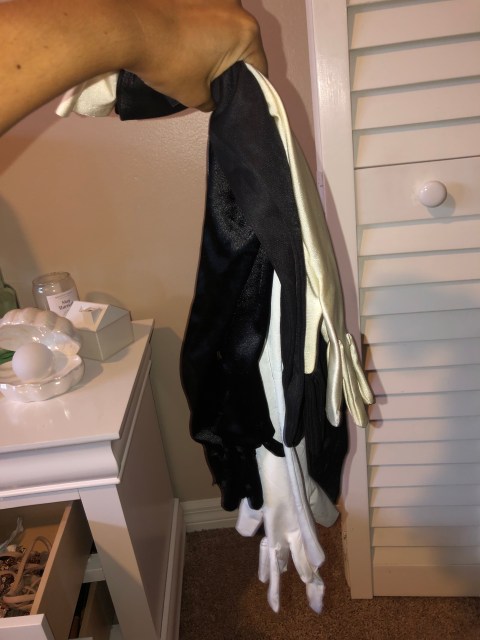 Six!!!! Pairs!!! I think the answer to this question is probably as simple as “used to be a musical theater student at an arts high school.” And on top of that personal history, I also had season tickets to the actual opera all four years of high school, but in a twist, I never once wore fancy gloves to the opera. I did once hold hands with a boy who had a girlfriend at the opera and then had to pray about it for like 3-6 weeks after.

Sorry for the poor quality of this photograph, but I am simply too busy trying to find a place to store all six pairs of my elbow-length gloves to take a properly staged photo. Perhaps you’re thinking why don’t you just give away/get rid of a few of the pairs of glove, Kayla? But reader, as perplexed as I am by my ownership of so many formal gloves, I cannot lie: They have often come in handy. For a while, I kept a pair in my suitcase at all times “just in case.” Wondering what a glove-based emergency looks like? WELL I’LL TELL YOU! Once, I was in New Orleans and was last-minute invited to a party that was both a pool party and also FUNERAL-THEMED. What does one wear to a funeral-themed nighttime pool party in the French Quarter? A bikini and opera gloves, obviously.

Yes, there are few comforts more satisfying than a really good, soft t-shirt or oversized long-sleeved shirt. But I sleep naked 98% of the time!!!! Surely, I could pare down to 5-6 really good sleep shirts?! But no, this is never going to happen. I’m an overly sentimental writer who has imprinted significant meaning onto every t-shirt in the “overflow” bin at the bottom of my closet.

3. Why does this never get easier and in fact seemingly get harder?

I thought for sure — FOR SURE — that this move would be cake or at least comparatively cake compared to past moves due to the fact that it is my first time moving while having a full-time job. And yes, you will not be surprised to learn that money does help a LOT with moving! Like for example, I packed my things in boxes from the U-Haul store instead of in garbage bags, which used to be my go-to. We hired movers, which was a first for me. My movers are usually my parents and my brother, and while they are significantly more affordable, this results in at least a handful of small to large arguments during the moving process, so I was happy to avoid that.

So in a lot of ways, I leveled up with this move, especially since I also am in an adult relationship with my incredible girlfriend who really did SO MUCH of the physical labor required by this move. Splitting up costs and labor and having each other for emotional support during this time was crucial, and I love that this move was a step toward building an even more stable and comfortable life together. During some of the hardest parts of this move, that was a nice thing to think about.

But the hard parts were still very hard! With so many things in life, the more you do them, the easier they get, but the opposite seems true of moving. It does not get better. It gets worse. I hope the next time I move into a new space, it’s a coffin.

4. Should I stop everything I’m doing and rewatch The L Word? 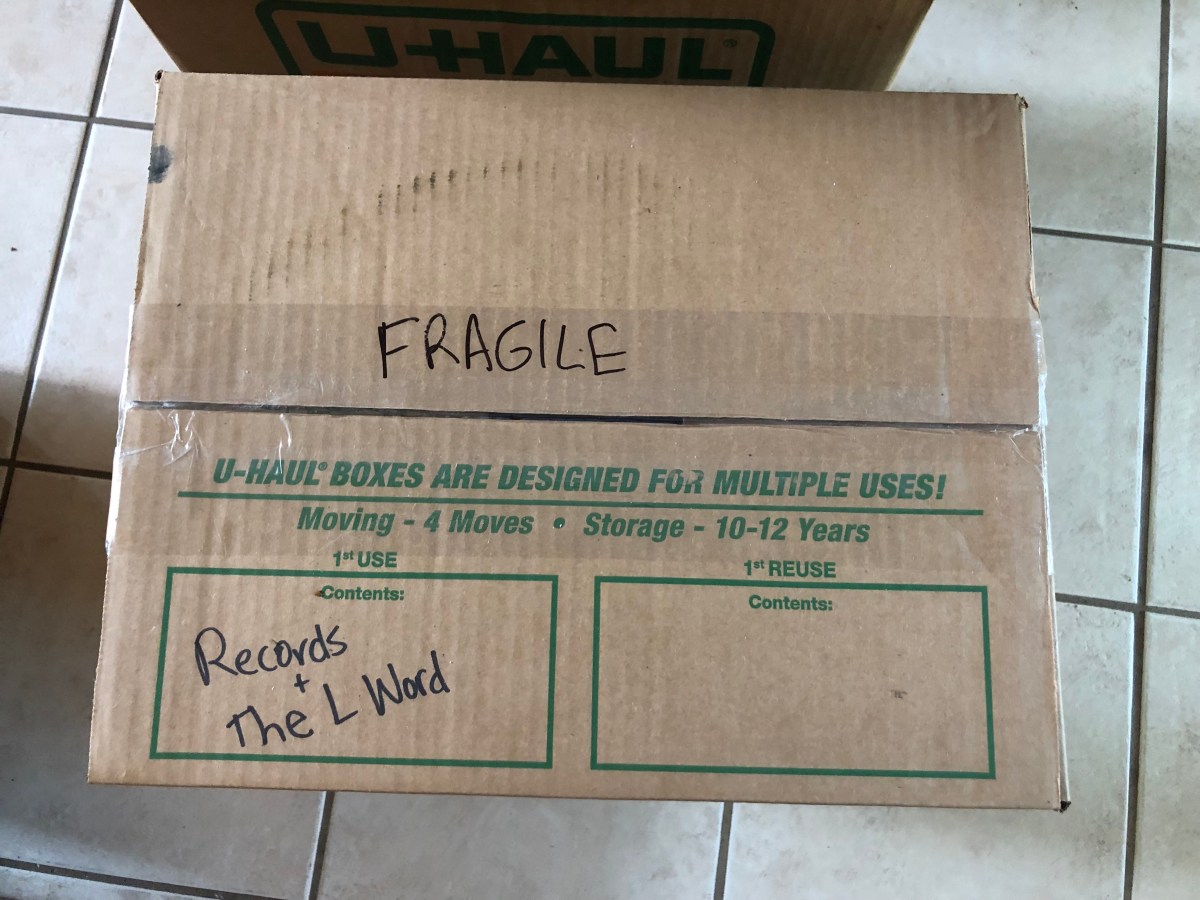 5. WHY DID I MAKE THE COFFEE MECHANISMS SO HARD TO FIND?

When two of my dearest friends came to visit me in Miami last year, I entered full Mom Mode during the trip planning and sent them a lot of details about my home to make sure things would be set up comfortably for them. In this information, I included a list of every coffee-making device I own: a French press, a Chemex, a stovetop espresso maker, an espresso machine, a regular ass coffeemaker, and a cold brew maker. This is entirely too many coffee mechanisms, I realize.

Now, a smart moving move would have been to keep all the coffee things together in a neat little box labeled COFFEE THINGS. Or, at the very least, have put the regular ass coffeemaker in a box with other kitchen accoutrement and labeled it MAIN COFFEEMAKER. But nay, I scattered the coffee devices in as many boxes as possible, and all of said boxes were labeled, simply, kitchen. The L Word got its own labeled box but not the coffeemaker(s). This made it very difficult to locate arguably the most important items on our first night in Orlando. I eventually gave up and resolved to walk to the coffeeshop in our new neighborhood the next morning. Luckily, all 47 coffee mechanisms have now been located. But the hunt will still haunt me.

6. Why are there so many bruises on my legs?

From the looks of my legs, I was apparently just running into furniture, boxes, walls, etc. for the entirety of this move. I do not recall specific instances of this, but that’s because the past week and a half (and more like the past month, if I’m being honest) has been a complete blur, and I’ve been very unaware of my location on the space-time continuum. Moving entails a lot of logistics when it comes to both space and time, and yet moving collapses space and time.

7. Will I internalize any of the lessons I learned from this move and implement better practices and solutions for the next move?

Kayla has written 459 articles for us.