Thanks to Mass Effect, Skyrim, and Fallout, I’ve reached a point in my life where I just won’t play an RPG if I can’t play as a queer woman. It’s the same as my character alignment in non-video game RPGs: I’m Chaotic Good in my real life, and no matter how hard I try, I can’t play a character who’s Neutral or Evil. I’m not going to watch a barn full of people burn to death in the hopes one of them will drop a magical weapon. And I’m not going to inhabit the mind and body of some animated white dude who was created to advance the power fantasies of real world white dudes. So when Ubisoft announced that Assassin’s Creed: Syndicate was finally adding a playable female character to the main AC canon, I was overjoyed — and then I found out she’d be sharing the story with her twin brother.

Assassin’s Creed: Syndicate tells the story of Jacob and Evie Frye, twin Assassin’s working together in Victorian London to free the oppressed working class and to keep Crawford Starrick, a Templar and the main guy who exploits The People, from getting his hands on an arcane artifact that will make him unstoppable and possibly immortal. I skipped Syndicate when it came out last fall because I’d heard that you have to play the majority of the game as Jacob, but when my girlfriend brought it home a couple of weeks ago, I couldn’t help myself. I had to try.

Good news: You can actually play the majority of Syndicate as Evie! Each sequence has a couple of Jacob- and Evie-specific memories you have to play through — Jacob’s trying to disrupt Starrick, while Evie’s trying to track down the Shroud of Eden — but nearly all the open world stuff like bounty hunting Templars or ghost hunting with Charles Darwin or saving lives with Florence Nightingale or ending slave labor with Karl Marx can be done with either character. I finished my first play through just a couple of days ago and spent 85 percent of my time as Evie. Syndicate also boasts a couple of excellent female villains. And women are just as powerful and prevalent in the street gangs as men. Plus, Evie is easily the best character in the game. She’s smart and fierce and kind and whimsical and eager to learn and prove herself. (She’s Hermione with a knife!)

I did face a handful of feminist conundrums while playing, though. Here are seven of them.

1. Does gender equality include gear? 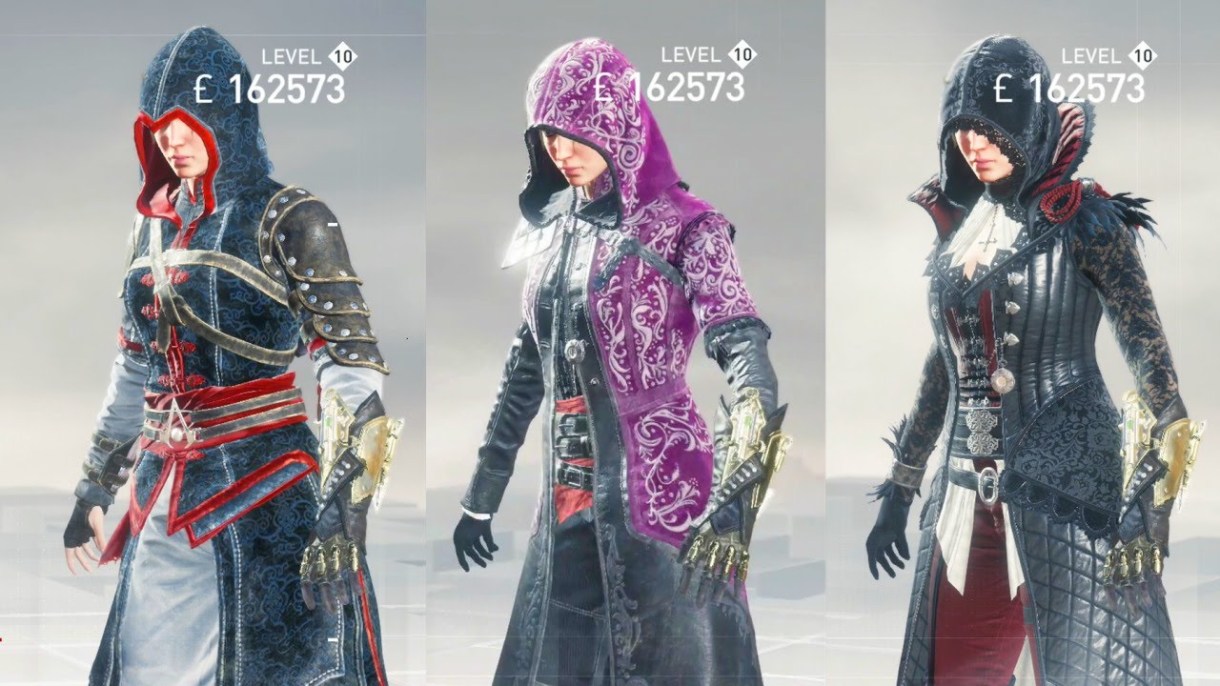 And none for Jacob, bye.

Jacob and Evie share money, which means whatever one of them racks up out in the field, the other one gets to use when its their turn to adventure. Because I was always playing with Evie, I was constantly upgrading her to the best outfits, cane swords, assassin gauntlets, etc. I resented every second I was forced to play with Jacob and double resented that he had use the money Evie earned (FINE, or: stole/looted) to buy the weapons to fight off Blighters and Templars. So I only gave Jacob the minimum of what he needed to survive, and while Evie ended the game arrayed in such finery, Jacob was still in the patchwork suit he started in. Yes, yes, everyone wins when the gender pay gap is closed, but Jacob spent most of his time lounging on the train while Evie was saving the world.

2. Why is everyone so white? 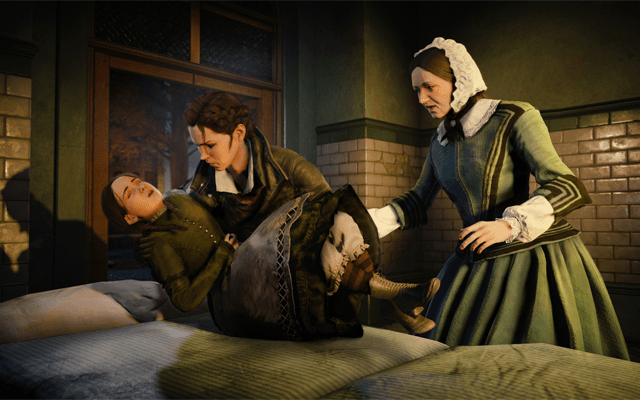 She just saw the Faking It midseason trailer; she needs to lie down.

Syndicate adds a main character named Henry Green (more on him later) who’s an Indian immigrant, and also it adds an ambassador from India who exists for about ten minutes in a side quest. Progress! But every other person in the game is as white as driven snow, or an episode of any ’90s sitcom. Remember when Ubisoft’s developers said Unity wasn’t going to include playable women, even though every other major open world RPG on the market was starting to include women, because it was “double the work”? Maybe the idea of not-white skin tones just exhausted them.

3. I’ve got to participate in gendered violence? 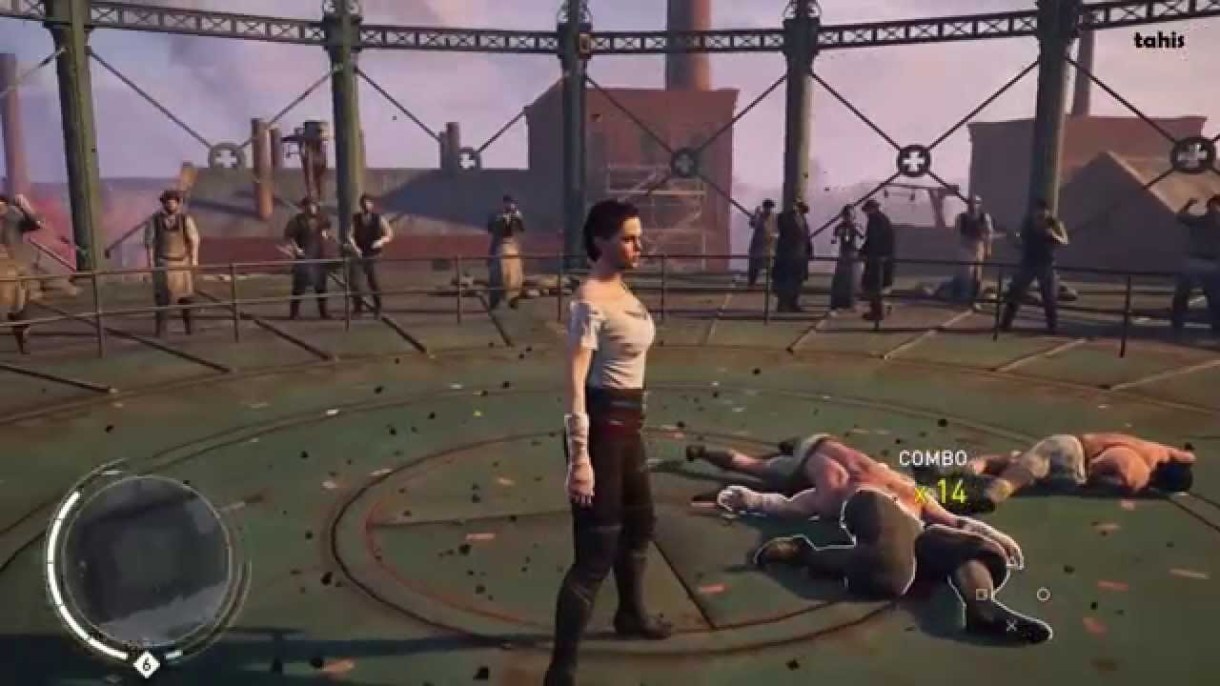 One of the reasons I won’t play RPGs as a dude is because you have to kill a lot of women in all video games and I don’t like the way it feels when gendered violence is such an enormous problem in the real world. In one of the big storylines in Jacob’s sequences, he has to kill one of the main female villains, and the way it plays out, his motivation is retaliation over hurt feelings as much (or more) than the cause of taking down the Templars. Stacy was watching me play that part and she was like, “Whoa, are you really going to do this?” I did and I hated it.

4. A boyfriend for Evie? Seriously? 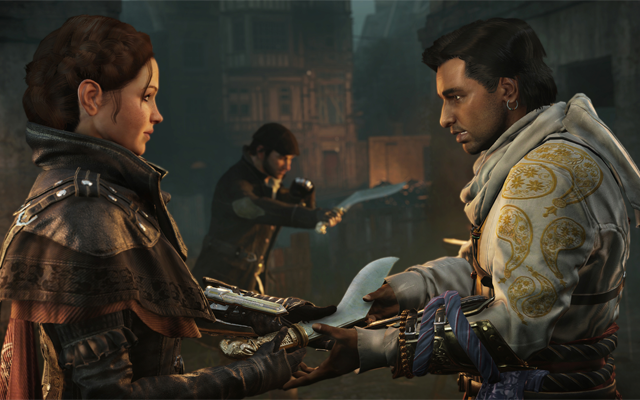 I will send a fully armed battalion to remind you of my love!

Evie’s relationship with Henry Green dominates her sequences by the middle of her storyline, and, in fact, she spends one entire mission trying to save this guy she’s driving around in her carriage while yelling back and forth with him about whether or not it’s cool to get romantically involved with your Assassin partners. Forcing the first playable female character in a main AC title into a romantic storyline that takes over her characterization and causes a rift between her and Jacob is crazy-making! The unchanging, built-in dialogue in the final quest includes Jacob scoffing at Evie about chasing the Shroud of Eden around London and flirting with Henry all day every day, while he’s been ridding the city of Templars and Blighters, which assumes you’ve been playing most of the open world with Jacob. Evie is the one who cleared every open world mission in my game and she only spoke to Henry when she needed to advance the main storyline!

I concocted my own headcanon which was that Jacob was jealous of Henry and Evie’s relationship because it was Jacob who was in love with Henry, and obviously Henry was in love with Jacob too and just getting close to Evie to try to get to know him better, and that was fine with Evie, of course, because Evie was super into British suffragist and human rights activist Millicent Fawcett (who isn’t in this game but those two are made for each other). 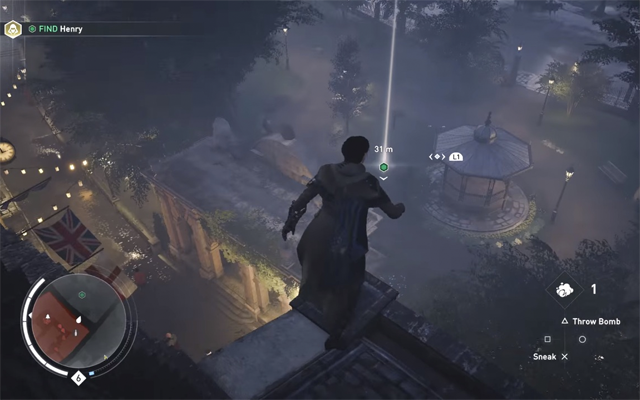 Maybe Henry should have STAYED ON THE TRAIN if he didn’t want to be in danger.

I’m a completist and so I like to do all the little sub-challenges in each quest to get maximum rewards. In one quest, Henry (who is not a field agent!) accompanies Evie into the field and Syndicate challenges you to “use Henry’s distraction” to defeat your enemies. We’re talking a hundred XP difference and enough money to fill up my supply of Voltaic Bombs (thanks, Alexander Graham Bell!) if I “use Henry’s distraction.” But look, Evie is perfectly capable of defeating every enemy in this quest on her own and she’s not going to make it harder on herself just so she can make a man feel included in her triumphs! I did not “use Henry’s distraction.”

6. Save the cats or save Henry? 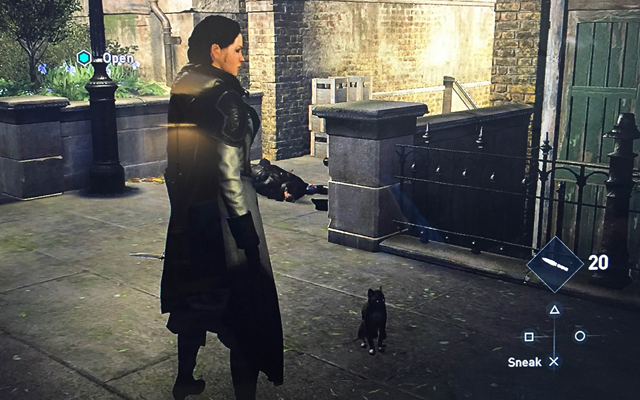 During the quest when Henry stupidly follows Evie into the field, he gets kidnapped. It was during that quest when I also discovered there are cats in this game! The clock was ticking on Henry’s life but I could not get over these cats! This one was walking around in a circle, giving himself a little bath, pawing at the ground, sitting still and gazing at me. I loved him. I wanted to adopt him. I wanted to scour the rooftops and find all the other cats and adopt them too! In my perfect world, Circle would scoop up a cat and make it yours, while holding down R1 and pressing X would summon Jacob to go save his boyfriend. (Is this a feminist conundrum? It’s definitely a lesbian one.)

7. What the literal fuck is with this dress? 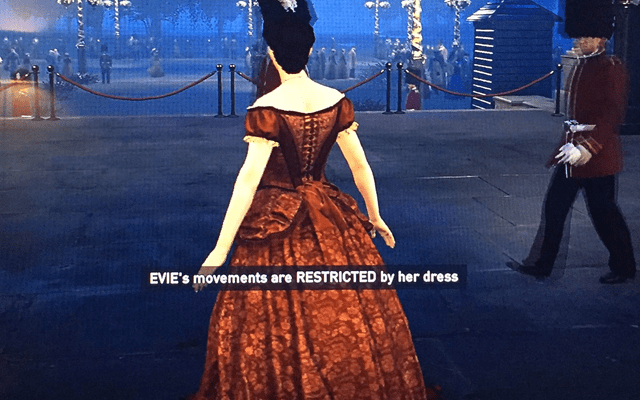 In the final sequence, Evie is forced into this dress which, as you see, restricts her movements and so she spends half the time walking slowwwwwwly around Buckingham Palace with no weapons or the ability to jump while Jacob runs wild and free on the rooftops with knives and his gun looking dapper as heck in his tuxedo. This, more than anything else, made me want to set Assassin’s Creed on fire.

I’m going to play through a second time and just take off my headphones when anyone is talking about Henry and Evie, and say my own dialogue instead. And I’m never going to “use Henry’s distraction.”