According to Baltimore Police, 38-year-old black trans woman Alphonza Watson was murdered this morning. She was found suffering from a gunshot wound to the stomach in the early hours of the morning and was taken to a hospital where she passed away. Watson is the 8th trans woman that we know has been murdered in the United States since January 1st. Seven of those women, including Watson, have been Black. Police don’t have a lot of information, other than that there was an argument and then two men sped away in a car. They are offering a reward for more information. 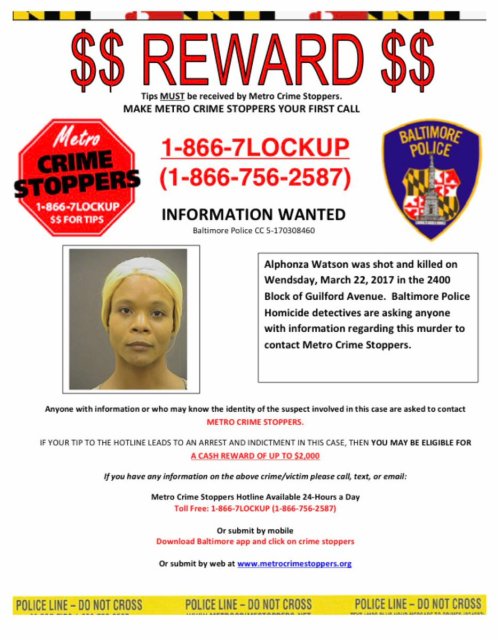 Just recently there’s been an increase in discussion around whether or not trans women are “real women.” This started largely because of some comments made by Chimamanda Ngozi Adichie, and then continued when she stood by those comments, and then got worse when cis white “feminists” started coming out of the woodwork to write articles about how trans women aren’t women in the way that cis women are. They argue that we’re still male, and that we’re not oppressed like “real women.” They claim that they aren’t being transphobic by saying this and that they still stand up for our rights while they’re saying it. That’s bullshit.

The main reason trans women get murdered is because men are told by society, by the news, by “feminists” that we are not real women. They hear “trans women are women, but really they’re males” and to them that means it’s shameful to be attracted to us. Black trans women are shot and left in the street because the men who are attracted to them and who sleep with them, don’t want to be seen sleeping with a “man.” There’s a straight line from the kind of thinking these “feminists” are saying and the murders of these women. You cannot pretend that you care about trans women’s rights or trans women’s lives if you push forward the idea that trans women aren’t real women. This murder, and the seven others this year alone, show why.

These are the trans women we know who have been murdered this year. They were real women, they lived women’s lives, they were not male and they deserve respect as women.