Tonight, the Seattle Storm and the Washington Mystics will meet in Game One of the WNBA Finals (9 PM ET, ESPNews). It’ll be the first time the Storm and Mystics have ever met in the playoffs but, perhaps, the path to this moment began, for both teams, eight years ago.

In 2010, the Seattle Storm were flying high: after finishing the regular season with a 28-6 record — the best in the Western Conference and in the league — Seattle went on to win the city’s second WNBA championship. With an explosive offense anchored by Sue Bird, Swin Cash and Lauren Jackson, they seemed on the verge of creating a dynasty. But that wasn’t to be: a knee injury sidelined Bird, a combination of injuries and overseas obligations kept Jackson in Australia and the team traded Cash to Chicago.

At the same time, the Washington Mystics finished atop the Eastern Conference during the 2010 season. They finished 22-12, the best regular-season record in franchise history. Despite an early exit from the playoffs, the Mystics seemed to have a nucleus of All-Stars that would make the franchise a contender: Lindsey Harding, Crystal Langhorne and Monique Currie. But that wasn’t to be: the Mystics ousted their head coach, traded Harding to Atlanta and lost Currie to injury.

Over the next seven seasons, both the Storm and Mystics worked to recapture that 2010 glory with minimal success. For their mediocrity — which included five losing seasons over the stretch — Seattle earned the #1 pick in both the 2015 and 2016 drafts. While it’s taken a couple years for all of Seattle’s players to gel, those picks, Jewell Loyd and Breanna Stewart, are now the cornerstones of a potent Storm offense. The rebuilding of the Storm took eight years, but everything’s finally fallen into place: Seattle finished the regular season with 26 wins, their best since that 2010 championship season. 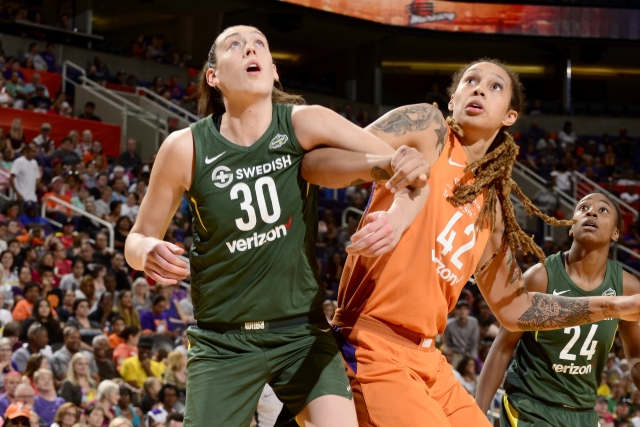 Having defeated the Mercury in the semifinals, Breanna Stewart leads the Storm to the WNBA Finals vs. the Mystics.

The path back to the top was more circuituous for the Mystics. They were perpetually unlucky in the draft lottery, never earning higher than the fourth pick. When the team failed to secure one of the top three picks in the 2013 draft, despite having the best chance statistically, ESPN’s Graham Hays wrote, “There have been funerals more upbeat than the room where representatives of the Washington Mystics gathered after Wednesday’s draft lottery. Then again, there have been funerals with more reason for optimism about a comeback.”

That’s how bad things were in DC.

The team would regroup and hire former Connecticut Sun head coach, Mike Thibault, in 2013. Despite not having the league’s top talent, Thibault was able to cobble together a playoff contender but the Mystics could never advance past the first round. But in 2017, the luck that had alluded the franchise for so many years finally found them, as Washington scored former league MVP, Elena Delle Donne, in a trade with Chicago. The trade would bring Delle Donne closer to her family in Delaware and reinvigorate the franchise. During free agency, the Mystics would add former Los Angeles Sparks sharp shooter, Kristi Toliver, to their roster. The Harrisonburg, VA native would add veteran leadership — Toliver had just helped LA capture their third WNBA championship — to a youthful core and cement the Mystics as a title contender.

Though the paths to becoming their current iterations were different, the Storm and the Mystics have both emerged from those difficult eight years as pretty similar teams. Both teams are lead by veteran point guards, Bird (now the oldest player in the WNBA) and Toliver, with championship experience. Both teams have versatile wings, in Alysha Clark and Ariel Atkins, who can play lock-down defense and open up the post with their three-point shooting. Natasha Howard and LaToya Sanders anchor their respective teams in the middle, both lanky centers who force pentetrating opponents into taking more difficult shots. And then, of course, there’s the battle at power forward between the current MVP, Stewart, and the former MVP in Delle Donne. 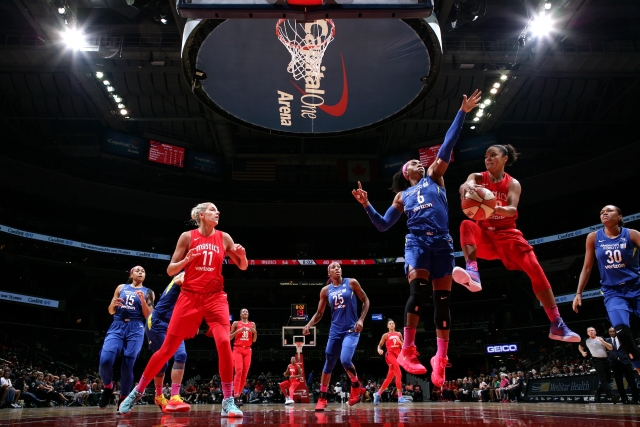 Washington’s dynamic duo takes their game to Seattle for the WNBA Finals.

Both teams boast solid benches — strong mixes of veteran and young talent — and it’s not uncommon to see Seattle or Washington opt for a 10-player rotation. Both teams rely heavily on the 3-point shot; Seattle led the WNBA with 31.1% of their points coming from distance, while Washington finished in second place, shooting 29.8% from three. Seattle won the regular season series against Washington, 2-1, but the Storm’s first win came against a short-handed Mystics team, playing without Delle Donne, Cloud or Sanders.

What’ll determine the outcome of this championship series? Certainly, at the forefront of that discussion has to be the injury Delle Donne sustained during the semifinals vs. Atlanta. In the days following her bone bruise diagnosis, Delle Donne devoted herself tirelessly to rehab, which included time in a hyperbaric chamber and float tank. Delle Donne returned to the lineup for the final two games of the series but she was clearly not at full strength. That said, even without her dexterity, Delle Donne was a threat, averaging 14.5 points and 10.5 rebounds over that stretch; she’ll draw the Storm’s defensive attention, just as she did against the Dream.

But perhaps the most pivotal match-up will be at the shooting guard slot, as Washington’s Natasha Cloud tangles with Seattle’s Loyd. While the latter is, undoubtedly, the greater offensive threat, the former is, by far, the better on-ball defender. During the series against the Mercury, Loyd sometimes struggled to find her shot — and was benched in Game 5 vs. Phoenix in favor of Sami Whitcomb — but if the Storm can get Loyd going again, they’ll be difficult to beat. On the other hand, if Cloud can shutdown Loyd, the Mystics have a great shot at getting the franchise’s first ever WNBA championship.

Natalie has written 135 articles for us.